Not far from the Boston Public Garden there is this unremarkable building called Steinert Hall. Piano dealers M. Steinert & Sons own the building, erected in 1896 by company employee Alexander Steinert. Architects Winslow and Wetherell designed the "six-story limestone and brick Beaux Arts-style facade with terra-cotta ornament and a copper cornice." 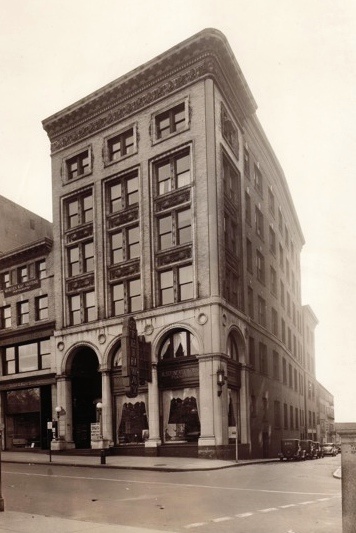 The Underground Theater​
Inside the building and four stories below ground is a concert auditorium, now closed, designed in the "Adam-style ... with fluted Corinthian pilasters separating round arches." Around 1911 some considered Steinert Hall the "headquarters for the musical and artistic world of cultured Boston. 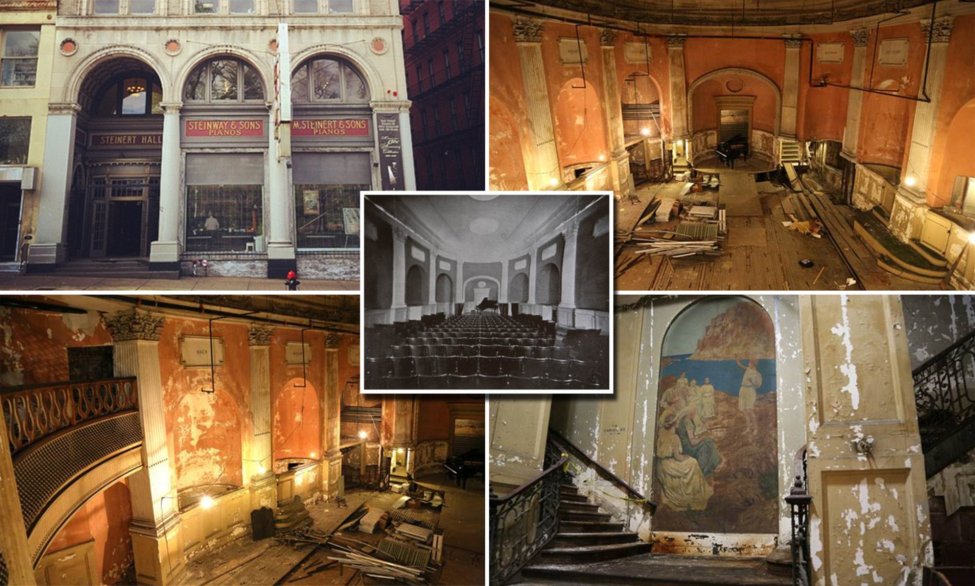 The concert auditorium, now in ill-repair, has not been used since it was closed in 1942 due to new fire code restrictions imposed after the Cocoanut Grove nightclub fire and the prohibitive cost to upgrade the hall.

In May 2015, it was announced that the hall would be renovated in an attempt to open it again for performances. After 72 years hidden from the public, Boston's underground theater may have a chance to open its doors once again. 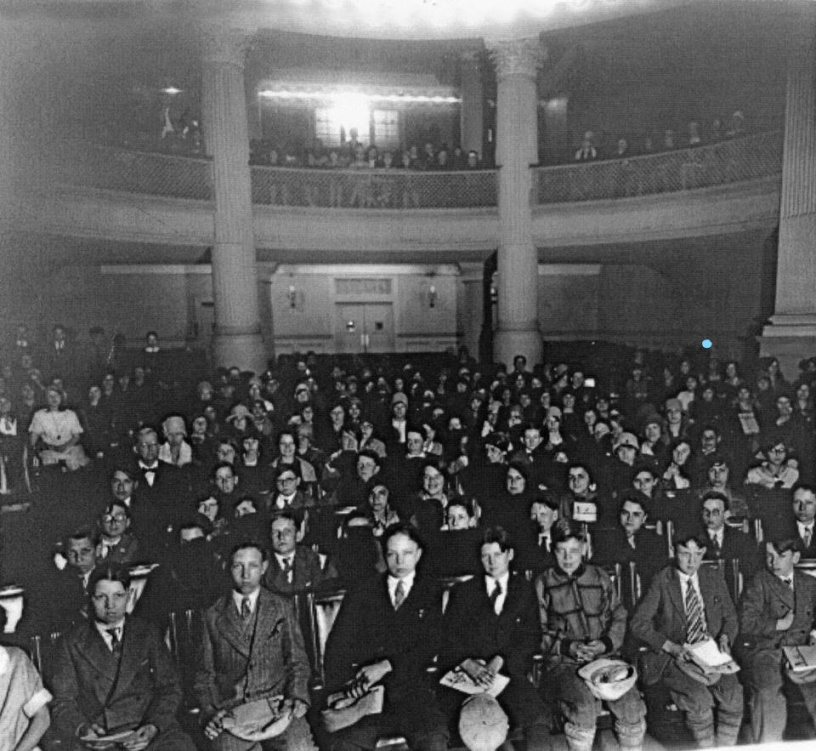 Foundlings and the Orphan Trains? 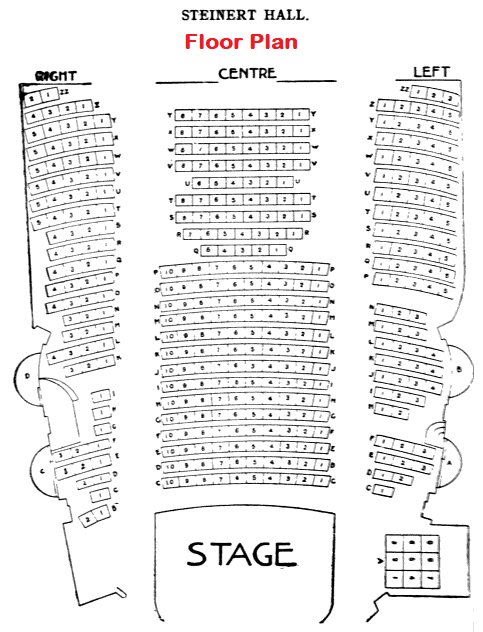 The performance hall was built below ground to shield it from the noise of the street. As a basement theater, it's below the water table, meaning it's damp and usually around 60 degrees - posing a number of architectural issues. Today, piles of record boxes and piano parts fill the theater. Paint peels from the walls and plaster falls from the high ceilings. 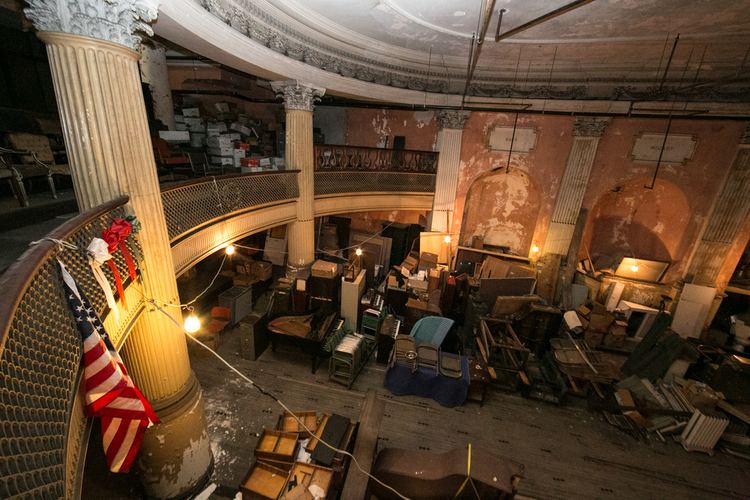 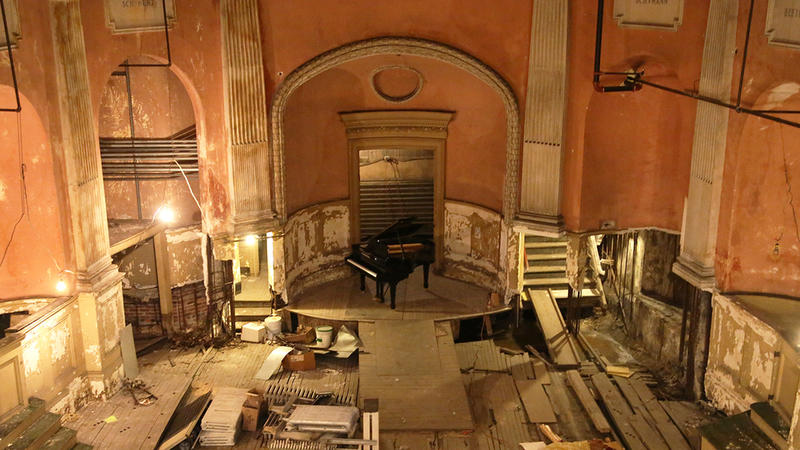 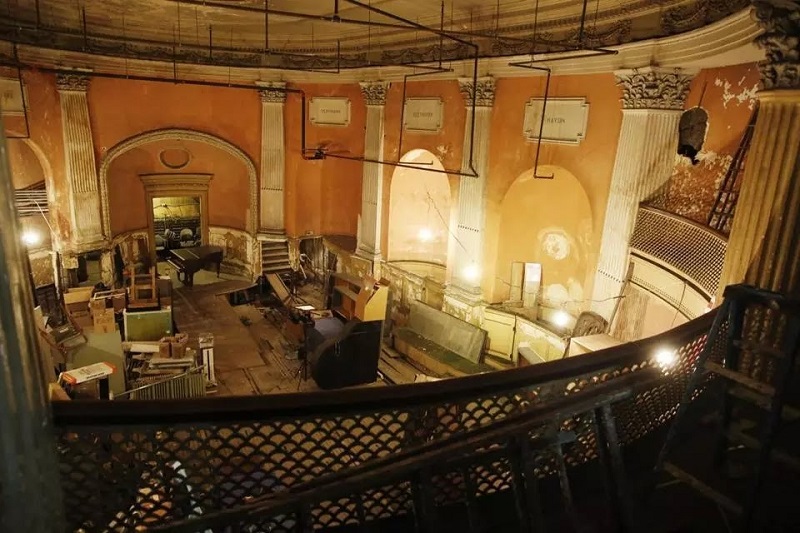 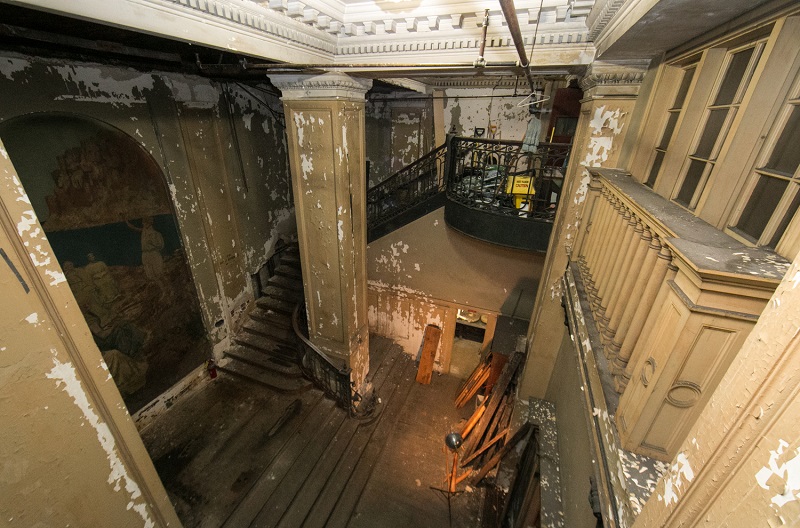 ​
Despite multiple development proposals over the years, none had come to fruition, WBUR's Robin Lubbock reported in 2014. At the time, Paul Murphy, the president of M. Steinert & Sons, said the performance hall would have to be deconstructed before it could be rebuilt. Mosakowski's idea is to bring the historic building back to its former glory, Jim Elcock, managing partner of Colliers International, the company advising Mosakowski, told the Boston Globe.

“The intent is to fix it up - but not close the doors - and to share it and have it be a part of the Boston music, arts and cultural scene," Elcock told the Globe. M. Steinert & Sons will move out of the building temporarily during renovations and plans to return to "a modern, state-of-the-art showroom." The renovation project is scheduled to begin in late 2015 and last 18-24 months, according to the statement. Steinert & Sons did not say if renovation of the performance hall is included in initial plans. 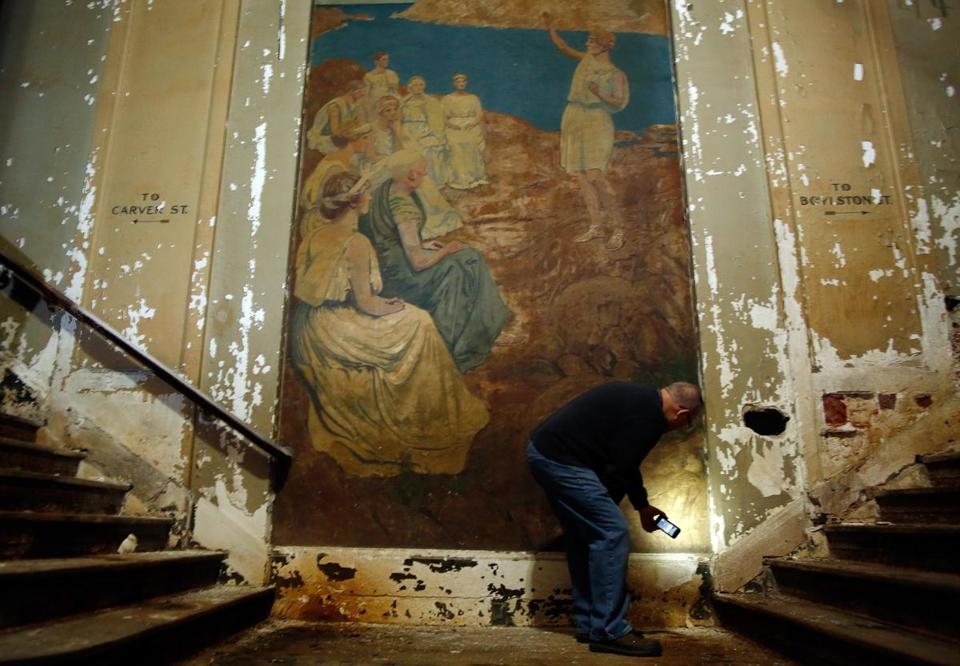 KD: They sure did like building underground structures back in the day, when there was no apparent need for any. This theater was allegedly built 40 feet below the street level to to shield it from the noise of the street. Makes one wonder how the rest of them above ground theaters were able to cope with the street noise.
Wondering whether our Boston forum members even know about this moisturized abandoned theater hiding beneath their very feet. Well, as I made it known, I think we have a lot more than that hiding under the pavement we walk on.

Speaking of the alleged construction of such an underground structure, I did some simple calculations using Google Maps distance measuring tool. They had to remove 223,200 cubic feet of dirt as can be figured out from 124ft x 45ft x 40ft measurements. 223,200 cubic feet equals to 8,266 cubic yards of dirt. 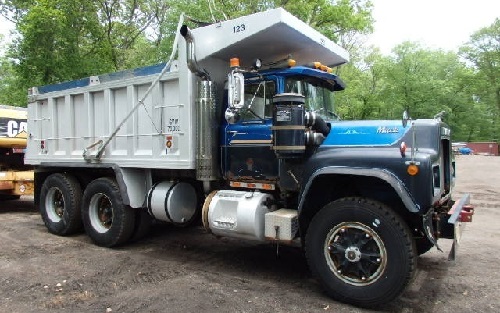 For us it means that in 2019 it would take us between 459 and 826 trips, depending on the dump truck model. What did they use to haul that much dirt in 1896 for this achievement to leave no noticeable mark within the searchable internet?

AtlasObscura.COM: Steinert Hall still rots away, untouched and unused deep under the Steinert piano store. It seems to be used as storage for broken or abandoned pianos, adding to the mouldering look of faded opulence. Visitors are not generally allowed into the decaying hall, and employees in the surface-level store are markedly reticent to discuss the space, but some high-profile touring musicians such as Elton John have been known to check out the grand old hall. 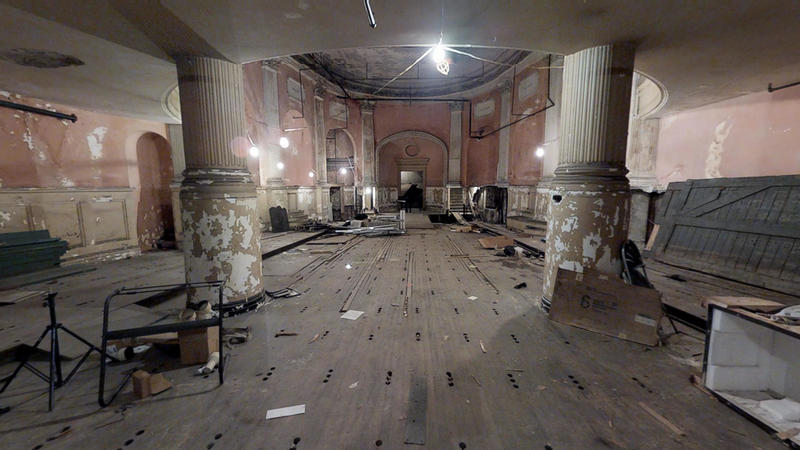 ​
I think we are witnessing a buried structure reclaimed by those who lived in 1896. In my opinion, the current above ground Steinert Hall could have been erected in 1896 on top of the previously buried building. Who knows, may be the below three arches were the original top of this buried building with 4 additional stories added only in 1896. 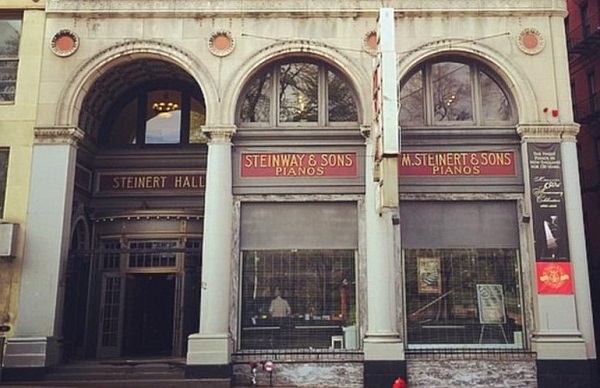 It would be great if we could dig up some additional historical info on this "forgotten" underground theater in Boston. I would not be surprised if there was some "underground Boston" tour somewhere nearby.

P.S. Oh, almost forgot... I do not think it was a theater prior to getting outfitted as one. Additionally, the empty openings in the walls are supposed to house statues. Something similar to the below image. 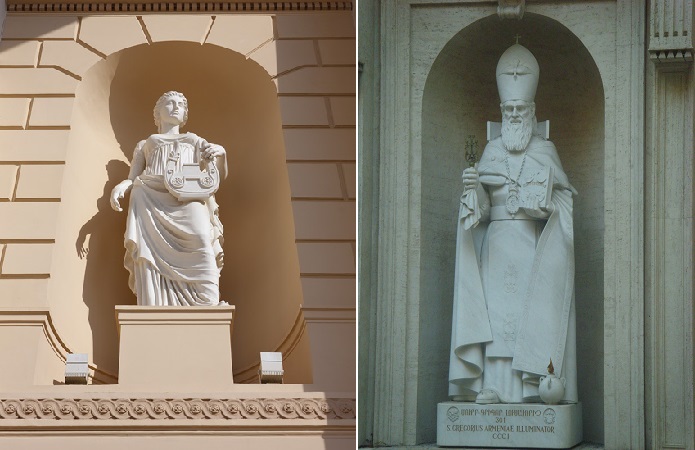 Where are the statues, and what were they?

​
The plaques above the statue enclosures state Bach, Mozart, Schumann, Schubert, Haydn and Beethoven, but I doubt those were the original dedications. Then again, who knows? One way, or the other, where are the statues and what did they look like?

Missing two can be seen here.​
Click to expand...

I think they've given up on restoring it. 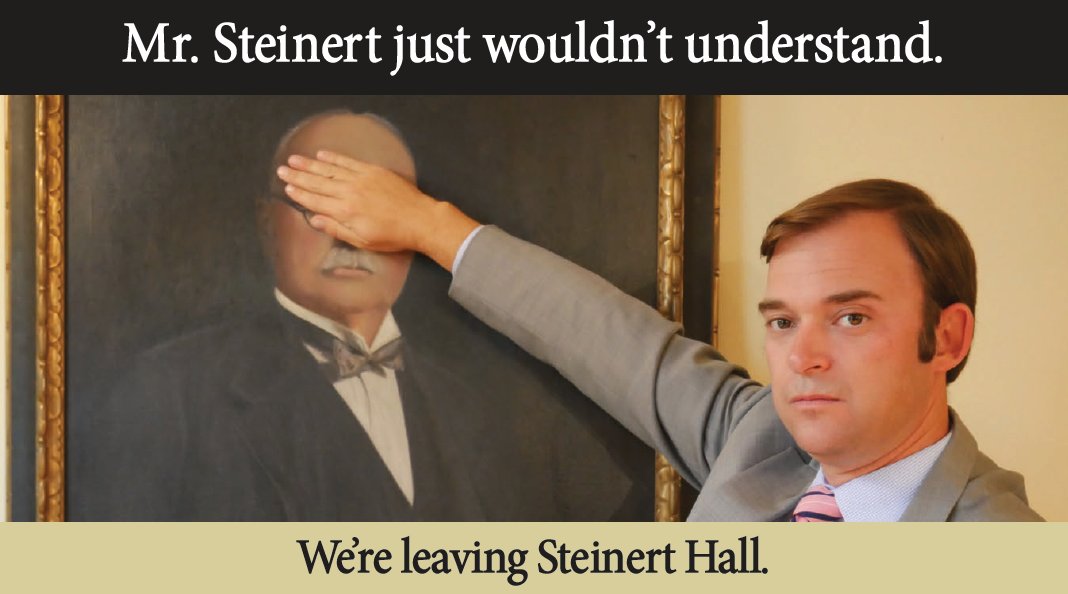 The page isn't dated, but the video linked in it was only uploaded in October 2020, so it appears this is recent. I guess it could be they're leaving to start renovations, but I'd expect that they'd mention that.

KorbenDallas said:
Visitors are not generally allowed into the decaying hall, and employees in the surface-level store are markedly reticent to discuss the space, but some high-profile touring musicians such as Elton John have been known to check out the grand old hall.
Click to expand...

A couple more details here on that and some other Interesting remarks from Gary Girouard:

Back to Elton. He was fascinated with the old building – and particularly loved Steinert Hall, the “apocalyptic” vibe, and the unique acoustics (more on this later)....

...And here’s the best part of the story: Where do you think I recorded my first “Naked Piano” albums? In Steinert Hall – the abandoned “acoustic marvel” which had so impressed Elton John and his band!...

...Over and over, people comment about the “special acoustics” and “mystical, ghostlike character” of the abandoned space.

I was fortunate during my time at Steinerts to have supportive colleagues who allowed me to bring a Steinway Concert Grand piano (9′, Model D) down into the Hall, set up and record (even when closed to the public for decades). To my knowledge, I’m the only one who has recorded a solo piano album in Steinert Hall.
Click to expand...

He has a sample track up of this recording.
Getting that piano down must have been fun, in one of the other videos, they mention the elevator (yes, it had one) has been out of service.

Also, not specifically about Steinert Hall (but it does show up on the list), look at all the formerly designated fallout shelters in Boston. The list is enormous!
You'll notice that most have had their fallout shelter signs taken down at some point in the past. Which makes sense because I believe Superman threw all of our atomic weapons into the Sun sometime in the 80s. So there's no need for them anymore!

Seriously though, this is one spot where the "well, it's not safe down there" explanation doesn't really fly. In the event of a nuclear apocalypse, I'm not really gonna worry if the fallout shelter is up to code. Kinda damned if you do, vaporized/irradiated if you don't situation (provided you think nuclear weapons even exist...)
Last edited: Feb 15, 2021
You must log in or register to reply here.
Similar articles