Some interesting things we can find in the older books. Has anyone ever heard of this huge underground city located in Turkestan (I assume it's today's Turkmenistan) sometime at the end of the 19th century? This could be a made up story, just like with anything else out there, but... who knows? 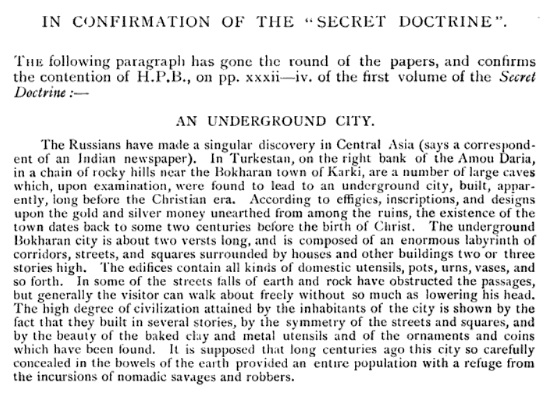 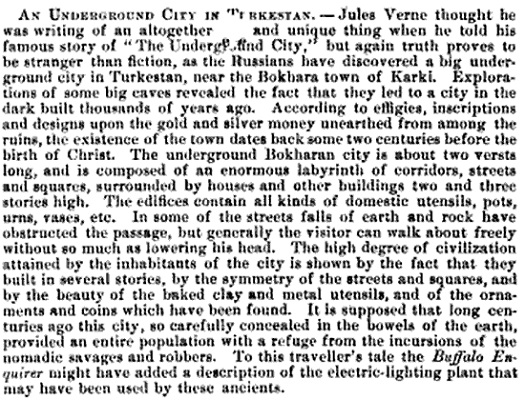 American Architect​
And at this link you can find some of our contemporary accounts suggesting that there could be some related things in the area:

As far as I understand this town of Karki should have have been spelled Kerki. This is the only resembling name I could find next to the Amu Darya river. More on this Karki can be seen here.

I could be wrong about this Karki being Kerki, but I simply can't find no Karki on the maps. 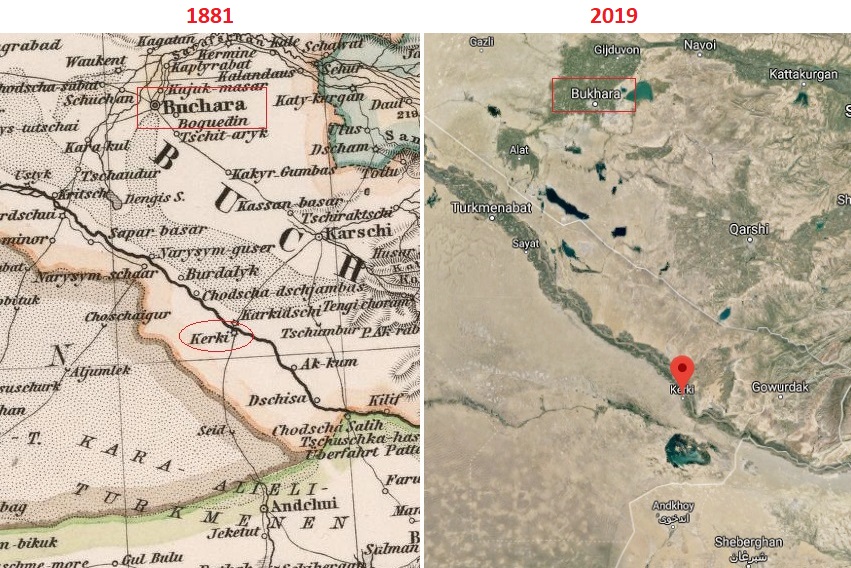 1881 - 2019
​
The book excerpts clearly state that this underground city was supposed to be on the right side of the Amu Darya river. At the same time it says it was next to Kerki, and Kerki is located on the left side of the river. looking at the 1881 map we can see quite a few municipalities on the right side of Amu Darya. Somehow none of those were chosen to indicate the underground city. 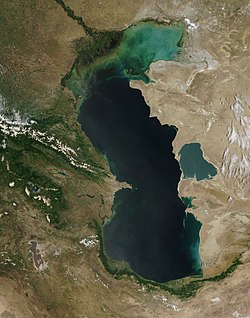 ​
Formation of the Caspian Sea (per the Narrative):

BS above, and Truth Below​
I do not know what millions of years our pseudo-scientists are talking about. It appears that Caspian Sea (in its current shape) was formed 370 years ago tops.

1640 Source​
You can verify the transformation progression here, and here. The information we get from the older map suggests a very similar to everything else picture. Sometime in the 17th century the humongous Caspian Sea, aka Mare de Bachu, lost approximately 75% of its waters. The outline of the "ancient" shape can still be seen on the modern maps. 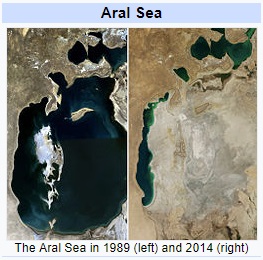 Amu Darya River​
In classical antiquity, the river was known as the Ōxus in Latin and Ôxos in Greek - a clear derivative of Vakhsh, the name of the largest tributary of the river. 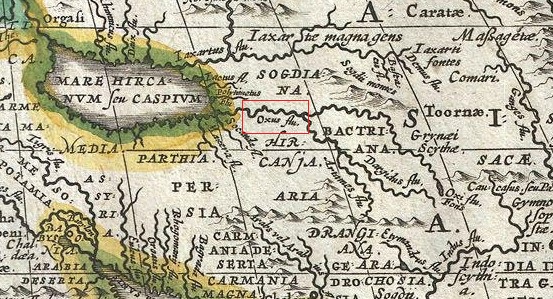 1650 Jansson Map of the Ancient World
​
May be I was too generous with the Renaissance time frame. Here is an excerpt from a book published in 1884.

KD: Well, anyways... if you come across any info on this Kerki/Karki lost underground city, please share. It would be nice to find out how a mile and a half long city found in the 1890s gets lost with no trace.

P.S. They have some ridiculous ruins in the area. Check this Merv place out. Nice artificial stone it has down at the bottom, me thinks...

Well you know my theory about the shock wave that ended the tartarian civilization ~200 years ago. Looking at all the spilled seas and great lakes that formed most of the deserts of our planet i can clearly see the same story here, with the Caspian sea. As i see this side by side comparison of the old Caspian sea map and the new one it is very clear to me how the flood pattern travels southward and covers all of the middle east region south of the Caspian and all the way to the Persian Gulf where the flood spilled into the Indian Ocean. That is how the middle eastern desert appeared. The countries of Iran and Afghanistan were completely covered in sand after the Caspian spill. Another clue that the flood waters traveled southwards is the large flood remain south of the town of Baku, which is exactly the same town of Bachu from the old map. There you can notice that Baku was at the south-western edge of the Caspian, now is is a peninsula. The flood spill covered the entire area where the word "Servana" appears and also occupied the lake that used to be in that zone. Hundreds of towns and cities from the Servana region are now at the bottom of the south part of the modern Caspian sea waiting to be discovered.
As for the size of the sea, it is now a mere 20% of what it used to be before the flood disaster. The Caspian used to stretch all the way from Tushilovka in the west to the present Syr Darya river in the east. It used to be the size of the Black Sea and now it is merely a large salt lake...
The town of Kerki used to sit on the south-eastern shore of the Caspian, a long time ago. The underground city found there was built during the Arian civilization of 2000 years ago. It was most likely a cataclysm survival bunker, just like we have hundreds nowadays built all over the world.
The countries of Turkmenistan and Uzbekistan did not exist 200 years ago, as that was the main stretch of the Caspian sea. The modern city of Ashgabat (which is an old tartarian city literally recovered out of the sand) used to be a beautiful city on the south shore of the old Caspian sea.
The Aral sea is a small remnant of the Caspian from the northern part of it.
It is remarkable to me how drastically the geography of our planet has changed after the flood cataclysm of 200 years ago. A great and magnificent civilization has ended and now we are here, a postapocalyptic society that - if you think about it - is not that far off from the Mad Max society...
We have a lot of learning and growing up to do, but thankfully, the planet's vibration is growing steadily and our awakening is accelerated. Even though we are a very young civilization of only 200 years, we have grown very fast technologically (but not spiritually) and i hope that one day we will build a better world full of harmony, love and peace.
Until then, baby steps, baby steps...

KorbenDallas said:
They have some ridiculous ruins in the area. Check this Merv place out.
Click to expand...

The Merv ruins are quite a bit away from Kerki, over 150 miles as the crow flies (and about twice that by car, as there are very limited roads).

Closer to Kerki, take look at their (I presume) old airport. 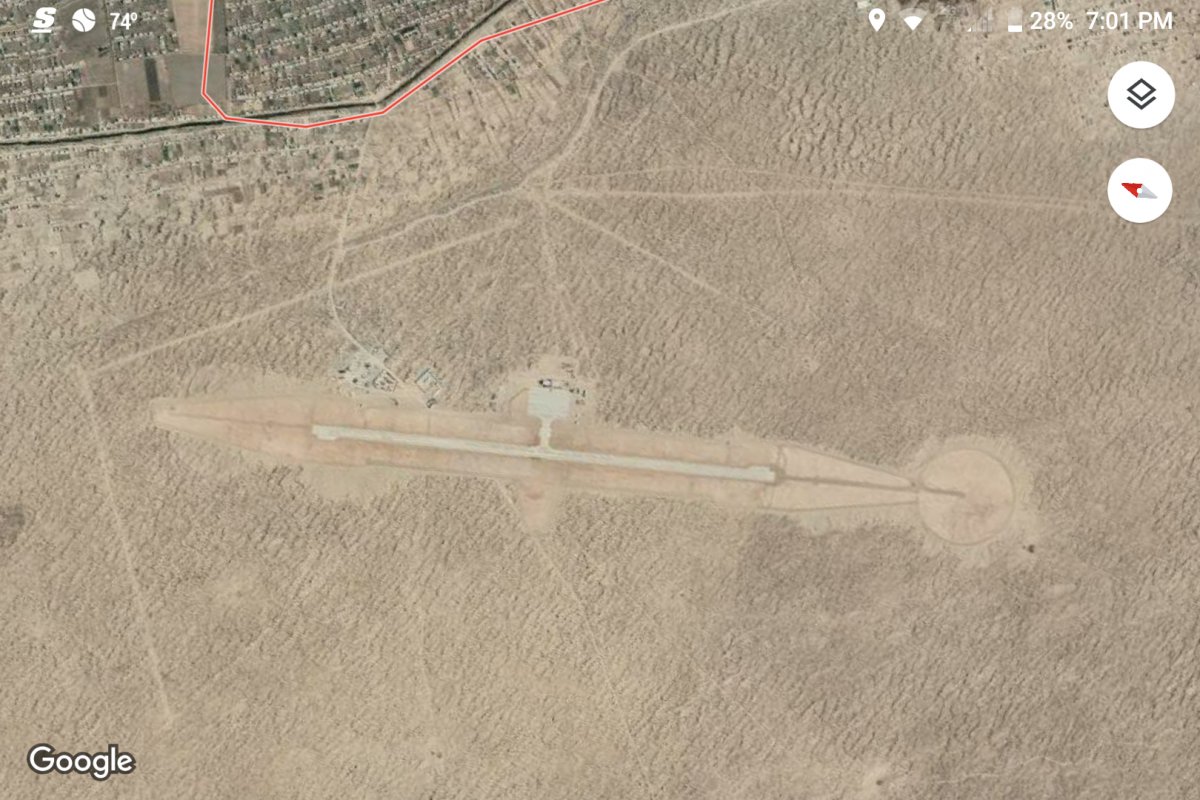 The order to create an airfield at Kerki was signed in 1946. The first flights began in March 1946. Once a week by Po-2, passengers from Kerki were flown to Ashkhabad and Mary. For many years, planes and helicopters flew from the unpaved strip to Gaurdak, Chardzhou, Garametniyaz, Zakhmet and other settlements.

Anybody want to venture a guess on why you would need to construct the additional detailed earthworks when you're just laying down an airstrip?

In any case, they built a new airport in the city limits and it coincidentally just opened this year (about a month ago, actually).

I also found this:

Kerki is an administrative centre forming part of Lebap velayat. It's a town with a population of 20.000. The city differs from others with its' XIX c architecture. Kerki is rich in archaeological monuments.
The first and most impressive monument is a comparatively older fortress named Sultaniyazbiy-kalasy (40 km of the Charjou-Kerki highway). It is also known as Seiydi fortress, named so in honour of Seyitnazar Seyidi, a classical Turkmen writer.
Another monument of Kerki is the Alamberdar mausoleum dating back to the XI c. It is situated 12 kilometres to the northwest of the present day location of the town of Kerki. This is the largest preserved monument among the early buildings of north Khorasan (in present day Iran).
Inside of the Alamberdar mausoleum there are architectural ornaments crafted from 15 types of figured brick. There is only one room adorned with a cenotaph, which often is mistaken as a gravestone but excavations have revealed that no one is buried there.
Alamberdar, or Alamberdar-tutchy is translated from Turkmen as "standard-bearer". No person is connected with the monument, however, from the written origins in Kerki there was killed Abu-Ibrahim Ismail Muntazir, the last ruler of the Samanid state. In Turkmenistan there is not a few of sanctuaries, where even today it's possible to see ziyarat-a ritual of worshipping to one or other saint, which is performed by pilgrims.
The Astana-baba mausoleum of Kerki is one of the respected saints. The mausoleum was subjected to multiple reconstructions during a range of centuries. Its oldest parts -"the mosque" and probably, its entry peshtak refer to 12 c, and its last capital restoration was carried out in 1918 - 1920 under the aegis of Bukhara Emir.
The Astana-baba cult has formed several centuries ago and not at all on the empty place. The name points out pre-Islam, pagan origin, then transforming in the image of a Moslem saint.
Now, both a settlement and a unique 4-dome in shape architectural ensemble bears this name.
Click to expand... 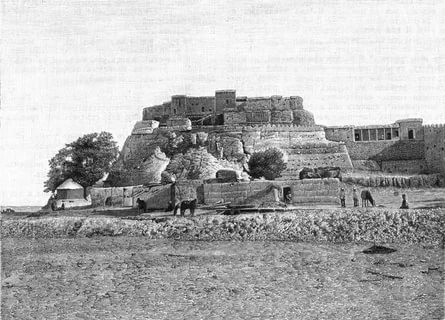 Source
​
Sorry, the picture is horrible. Sounds like it's a pretty good mystery though! Makes sense you'd have this sort of structure though, given what Kerki allegedly means, from wiki:

According to Atanyyazow, the name Kerki is most likely of Persian origin, from ker ("fortress") and kuh ("mountain"), meaning "fortress on a mountain". However, Muqaddasī and de Goeje assert it is a Turkified pronunciation of the Persian name Karkuh (کرکوه), meaning "deaf mountain". The ancient name, Zamm, is of obscure origin.

On 29 December 1999, by Parliamentary Resolution HM-60, the city and district of Kerki were renamed Atamyrat in honor of Atamyrat Nyýazow, father of Saparmurat Niyazov, who had worked in Kerki as a teacher before being killed in World War II. On 25 November 2017, by Parliamentary Resolution No. 679-V, Atamyrat was changed back to Kerki for both the city and the district
Click to expand...

Posted the rest because of the name games going on. I wonder what looking for Zamm on older maps might reveal as well.
Last edited: Jul 28, 2021
You must log in or register to reply here.
Similar articles