I'm actually pretty excited about this little discovery. I think it could explain how people in the past moved and shaped objects like these:
I also think that this could explain how our "antique" statues made out of "solid marble" were really made. It could also explain why 99% of all our "ancient" statues, busts, etc, were "discovered" in the 18th and 19th centuries.


Artificial Stone​
I did not go beyond the official Wikipedia Article pertaining to the narrative compliant history of the artificial stone production. Why would I? Wiki is the tool to give us the official version, and as such, the information provided has to be properly reflecting TPTB position on the issue.
KD: Essentially, the narrative tells us that our artificial granite: 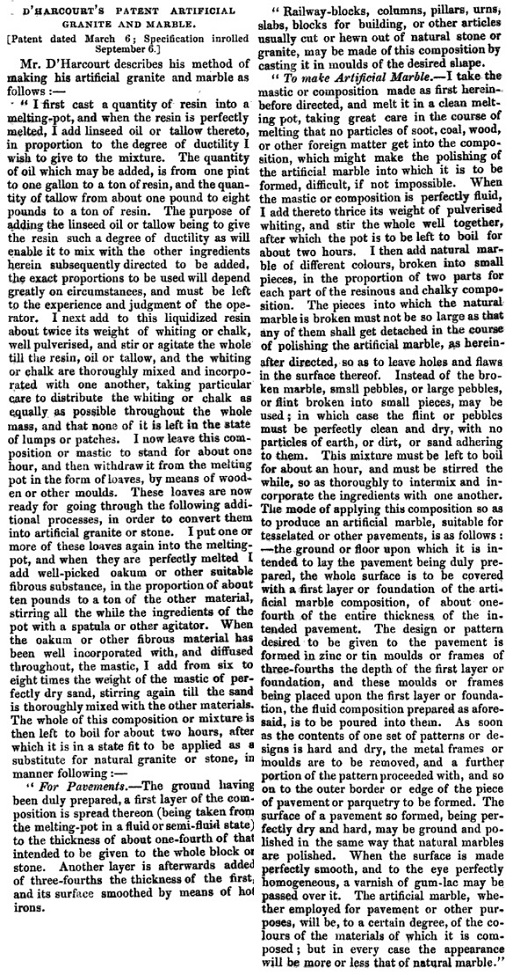 Source + Extra Source​
Above we have an example of the production specifications as recorded in 1839. I do not know who this Mr. D'Harcourt was, or where he received this education. This information is relevant but not for this little article. We are after the date here.


1822​
I have a strong belief that our Mr. D'Harcourt did not invent the method he patented in 1839. One of the reasons for it is this 1822 publication titled:
The above 1822 pub specifically talks about multiple issues related to the Artificial Granite. And while you can follow the link on your own I wanted to point out one specific issue with artificial granite as described in the above pub. 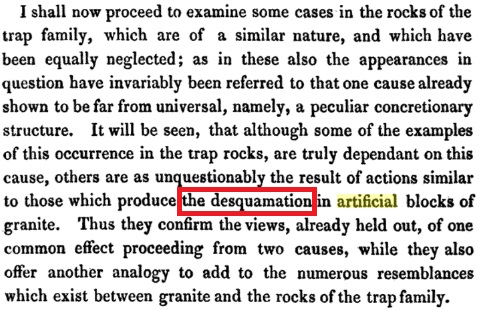 Desquamation​
I was not educated enough to know what this "desquamation" was (I hope I was not the only one), so I naturally turned to Google for answers:
Today, the proper term for stone desquamation is exfoliation. For granite we have this:
Exfoliation aka desquamation process is also known as spalling:
KD: At some point I thought that exfoliation was indicative of a stone being artificial. I was wrong, and it is now apparent that both artificial and natural stone can experience exfoliation.
How good were those 19th century artificial stone makers? May be the below excerpt could give us an idea. 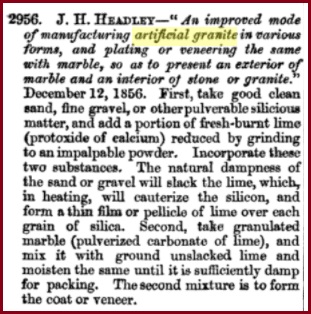 
1672
Artificial Marbles​
As far as marbles go, we have some even older information. I did not find the entire book from 1672. You can give it a try using this link here: 1672 Book

1743 Universal Dictionary of Arts and Sciences
​
Some of the above types of artificial marbles are actually pretty old. It's important to understand the difference between "their" stacco, and our "modern" one.

1853 Mining Magazine​
I am not going to dig in these artificial marbles. You can help yourself out using this link here - plenty of books to look at. Here is just a few:
Below you can see a small cutout, which I think is pretty telling. As you can see, having artificial marble columns cast using molds was nothing special for the "common people" living in 1736. As a matter of fact they were surprised to see columns made with real marble. 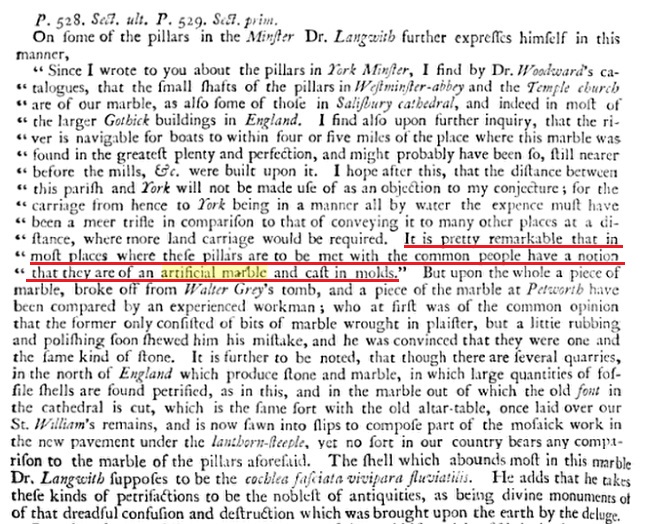 1736 The history and antiquities of the City of York 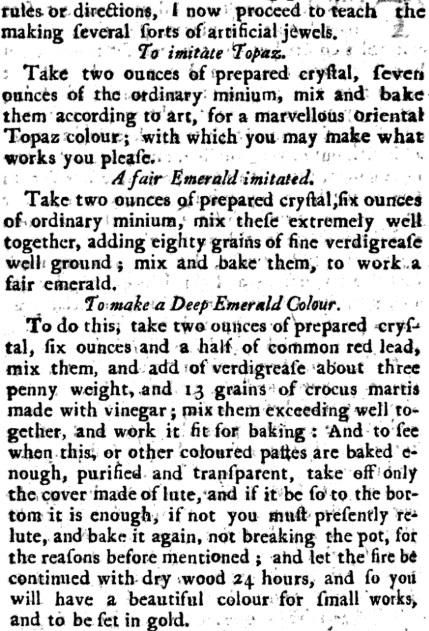 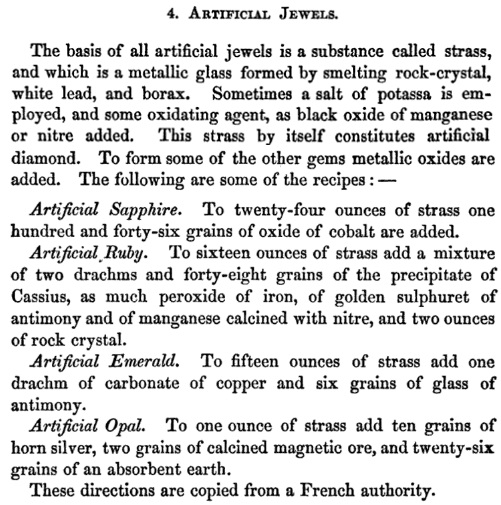 1855 An outline of the discoveries​
Synthethic Opal - Opals of all varieties have been synthesized experimentally and commercially. The discovery of the ordered sphere structure of precious opal led to its synthesis by Pierre Gilson in 1974.
Synthetic Sapphire - In 1902, the French chemist Auguste Verneuil developed a process for producing synthetic sapphire crystals.
Synthetic Amethyst - Synthetic (laboratory-grown) amethyst is produced by a synthesis method called hydrothermal growth, which grows the crystals inside a high-pressure autoclave. Synthetic amethyst is made to imitate the best quality amethyst. Its chemical and physical properties are the same to that of natural amethyst and it can not be differentiated with absolute certainty without advanced gemmological testing (which is often cost-prohibitive).

KD: Sounds like there is a whole lot we do not know about our not so distant past. Really, why would you spend time to quarry some 800 ton slab of granite, transport it to a city, and then spend time shaping, and lifting it. Apparently our so-called ancient forefathers were not as dumb, as our pseudo historians want us to think. They simply produced enough of the elusive artificial granite and avoided the below non-sense. 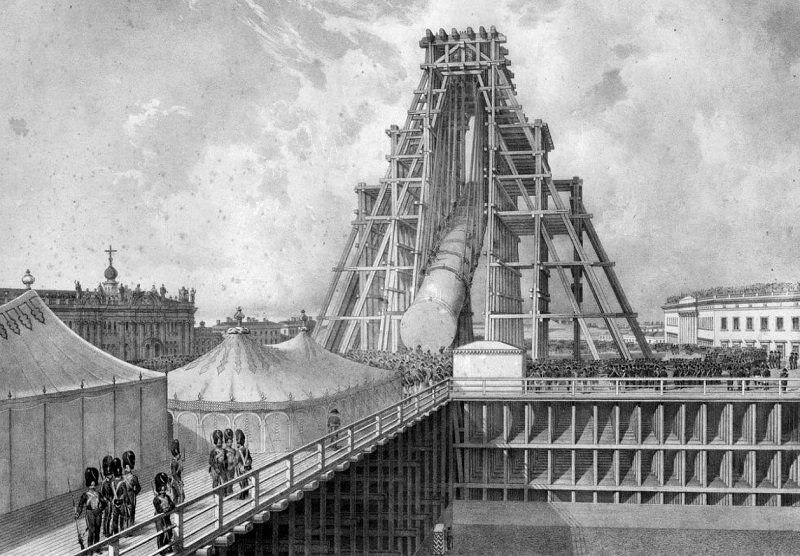 Fake history of Alexander Column in Saint Petersburg​
Also, with most of our "ancient" statues and busts discovered in the 19th century... are we still supposed to believe that for 2,000 years they were waiting to get discovered?