Novaya Zemlya: Russians Hiding the Remnants of the Old World?

Sometimes a simple Google Earth browsing yields remarkable results. It does not answer any questions, but allows for questioning of the narrative. I believe things, and known facts like the ones below, are capable of bringing the needed attention to a specific territory. Our community is growing, and it just could be, that a person, or a group of people will stumble into some information better explaining formations and occurrences related to the topic at hand.

NOVAYA ZEMLYA​
Novaya Zemlya is an archipelago in the Arctic Ocean in northern Russia and the extreme northeast of Europe, the easternmost point of Europe lying at Cape Flissingsky on the Northern island. West of Novaya Zemlya is the Barents Sea, and to the east is the Kara Sea. Novaya Zemlya is composed of two main islands, the northern Severny Island and the southern Yuzhny Island, which are separated by the Matochkin Strait.

Population​
Not counting on the PTB telling us the truth, I believe we have to be able to read in between the lines of the official narrative. Some of the "between the lines" info is fairly straight forward, and is available for your analysis.
KD: I do not understand what kind of indigenous population we are talking about here. If these Nenets were resettled to Novaya Zemlya in the 1870s, we should not consider them to be the natives. Keeping the Norwegians out suggests that Russians did not want the Norwegians to occupy the archipelago. So:
Essentially we have an area occupied by the military and those servicing the military. There are some Antarctica type cruises, which grant you no access to anything, and show you nothing. Bears, birds, whales and snow do not count.


History​
We are lead to believe that the area is well known, studied and contains nothing special to deserve our attention. The narrative is straight forward and here is what its says.
The above was mostly from the English version of the Wiki. Here is some stuff from the Russian one.
KD: It looks like we know jack nothing about anything pertaining to the history of the islands called Novaya Zemlya. With "possible this, and possible that", it sounds like the historians do not know, and TPTB is not willing to disclose the truth.


Older Maps​
I am not sure we are going to be able to extract any particularly useful information out of the available older maps. The area does have Tartary written all over it. Additionally, I think that some of the formations spotted on Novaya Zemlya could be directly related to Hyperborea and the terraforming tech of the ancients. 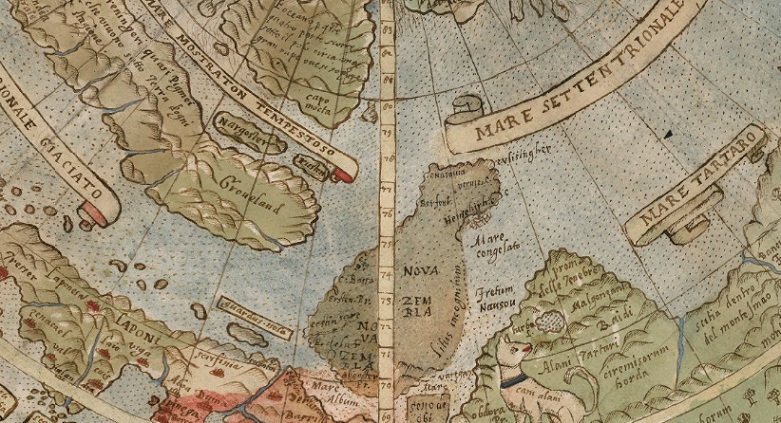 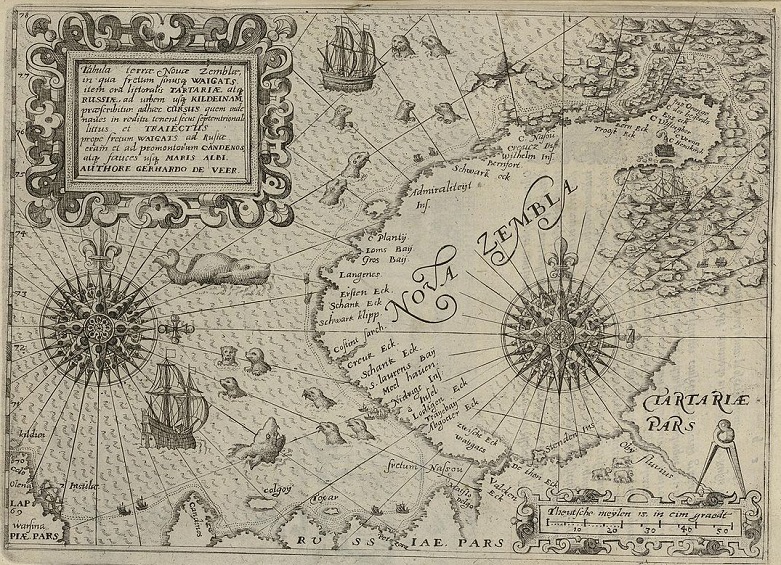 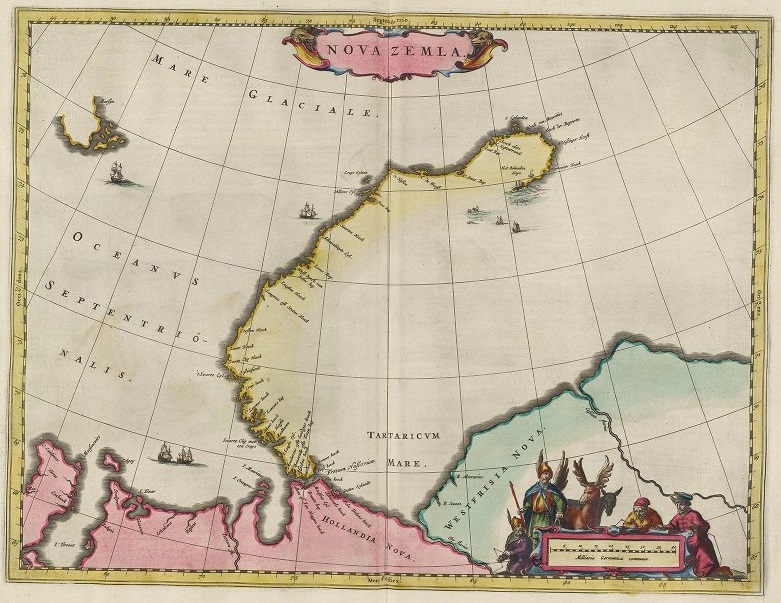 Source
​
Quite a few of the older maps show the area. Some of the Hypeborea related ones can provide additional grounds for your research. 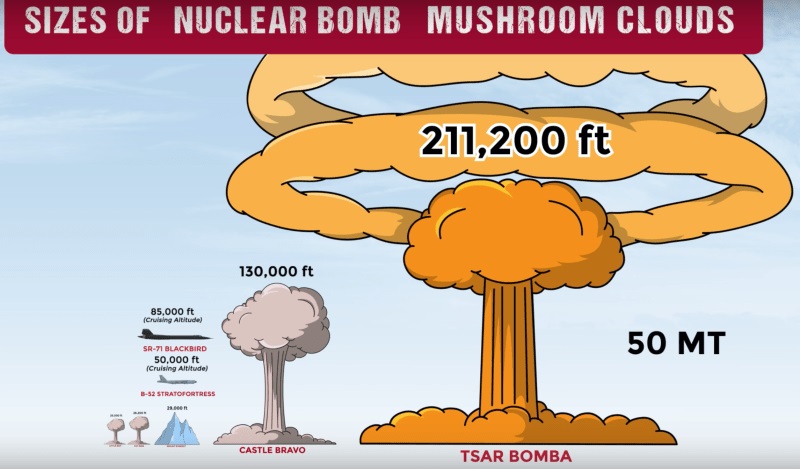 Some publications claimed that the bomb's power reached 120 megatons. ​
The bomb was detonated at the Sukhoy Nos cape of Severny Island, Novaya Zemlya, 15 km (9.3 mi) from Mityushikha Bay, north of Matochkin Strait.The detonation was secret but was detected by US Intelligence agencies. The US apparently had an instrumented KC-135R aircraft (Operation SpeedLight) in the area of the test - close enough to have been scorched by the blast. 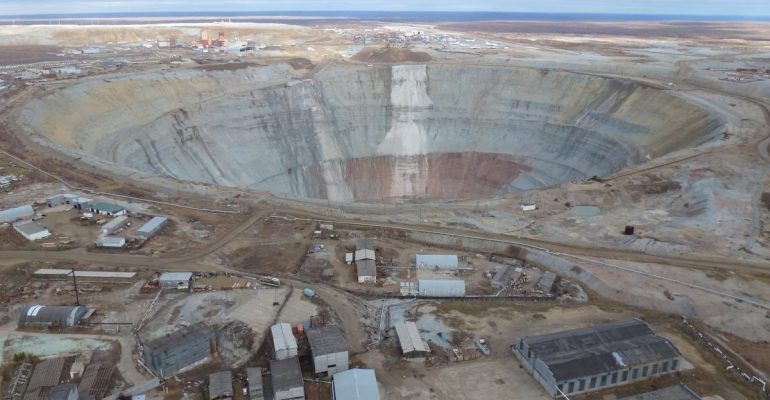 In Novaya Zemlya, a total of 135 nuclear tests were performed in the atmosphere, under water and underground. The explosion of the most powerful hydrogen bomb in human history with a capacity of over 50 megatons at an altitude of 4.5 kilometers also occurred here.

Today we Have​
Finally, here is why I started this article. Suggesting that all of the below walls (or whatever we wanna call these) are natural formations, would be preposterous. Things like that do not exist in nature. That is if there is such a thing as Nature. A rock can naturally roll down the mountain, but could that mountain/rock form naturally would always depend on what we consider to be natural. 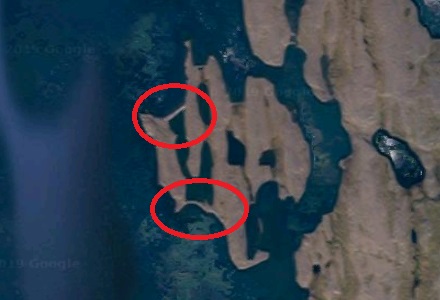 ​
You should get the idea by now, so I'm gonna stop circling stuff. 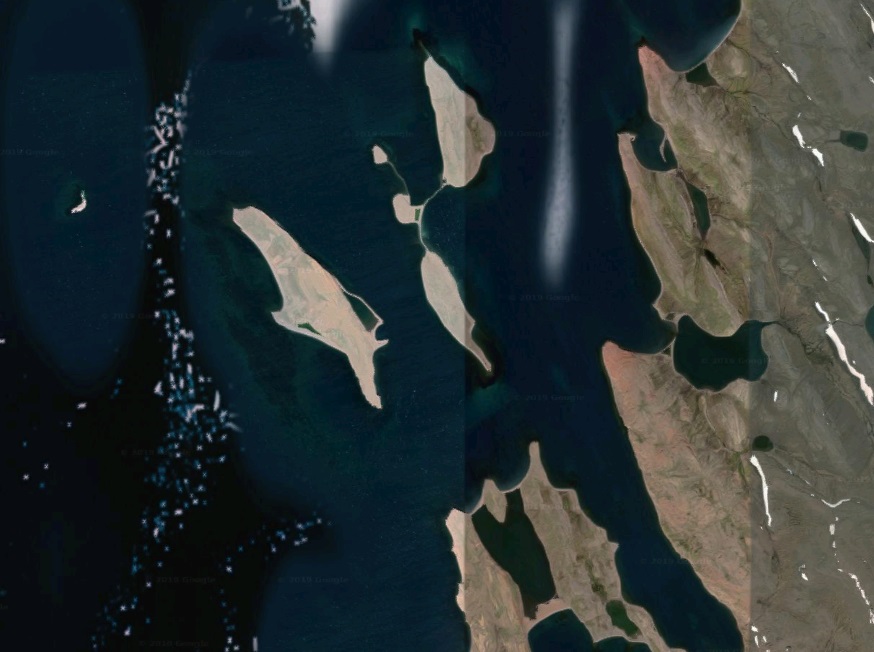 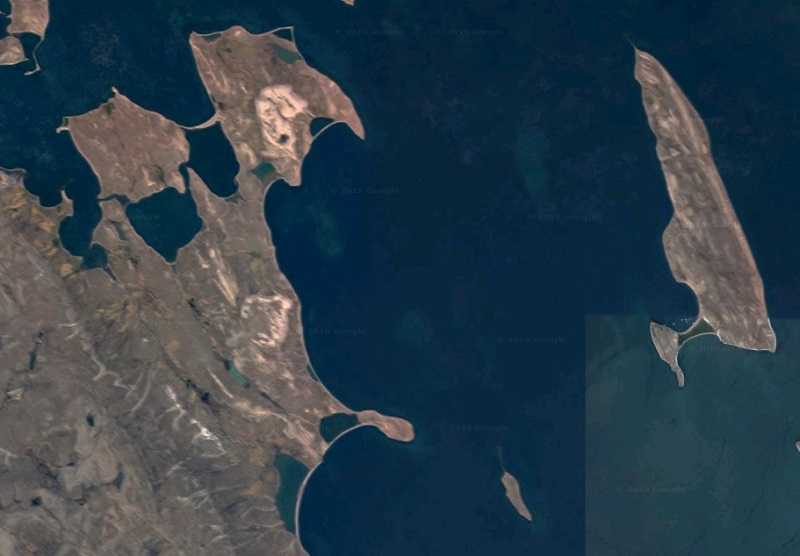 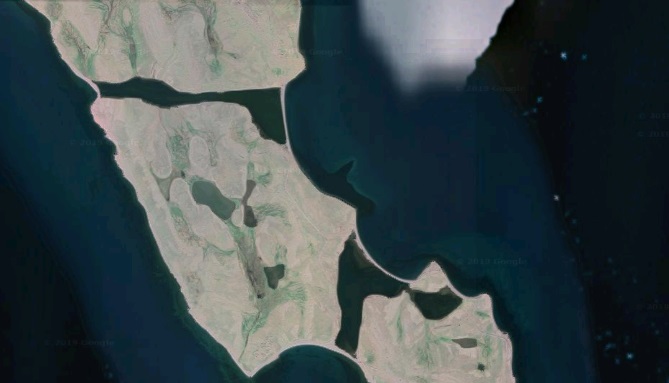 My hypothesis on this is as follows:
I did not play with older texts this time. If time allows will look into those later. For right now I simply wanted to present this little piece of whatever it is and see what our blog members have to say.

If your inspection of the current maps of the area yields any additional abnormalities, please share.
Click to expand...

Curious indeed. I did a quick scour of the islands on google maps, Apple Maps, and earth star. I did notice a few things, perhaps meaningful and more likely not…

The low coastal flatlands where you identified the formations; they appear to be covered in sweeping striations, almost as if they were razed by something incomprehensibly large and powerful. My mind was immediately drawn to this image: 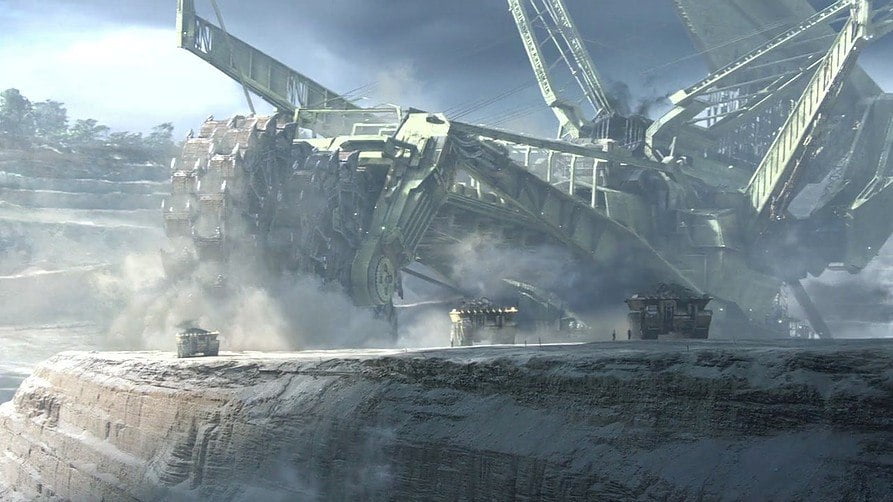 Pulled from this very interesting article: Are These Giant Prehistoric Trees?

But more (or perhaps less) interesting, is this patch of land near the northern tip. 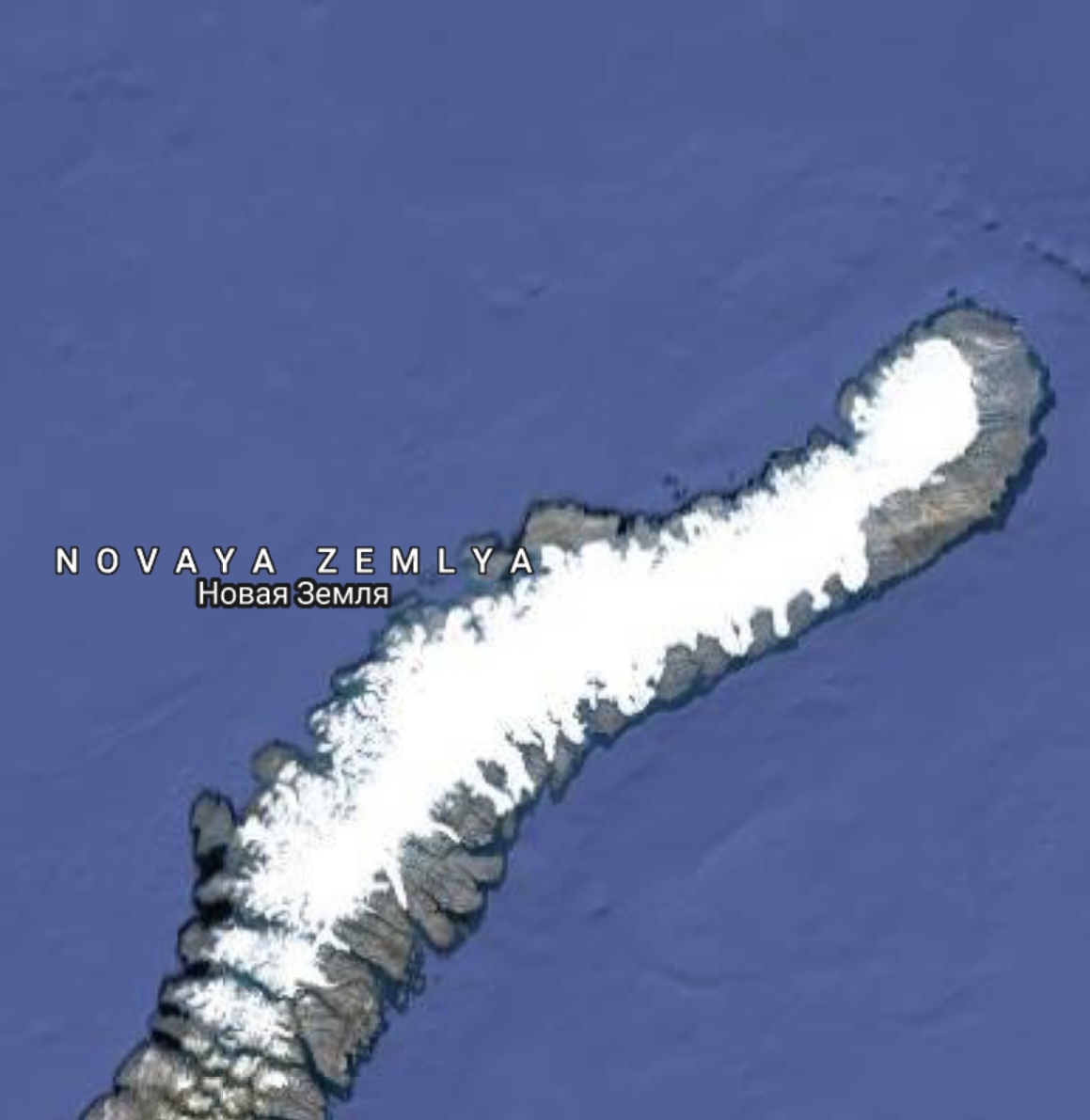 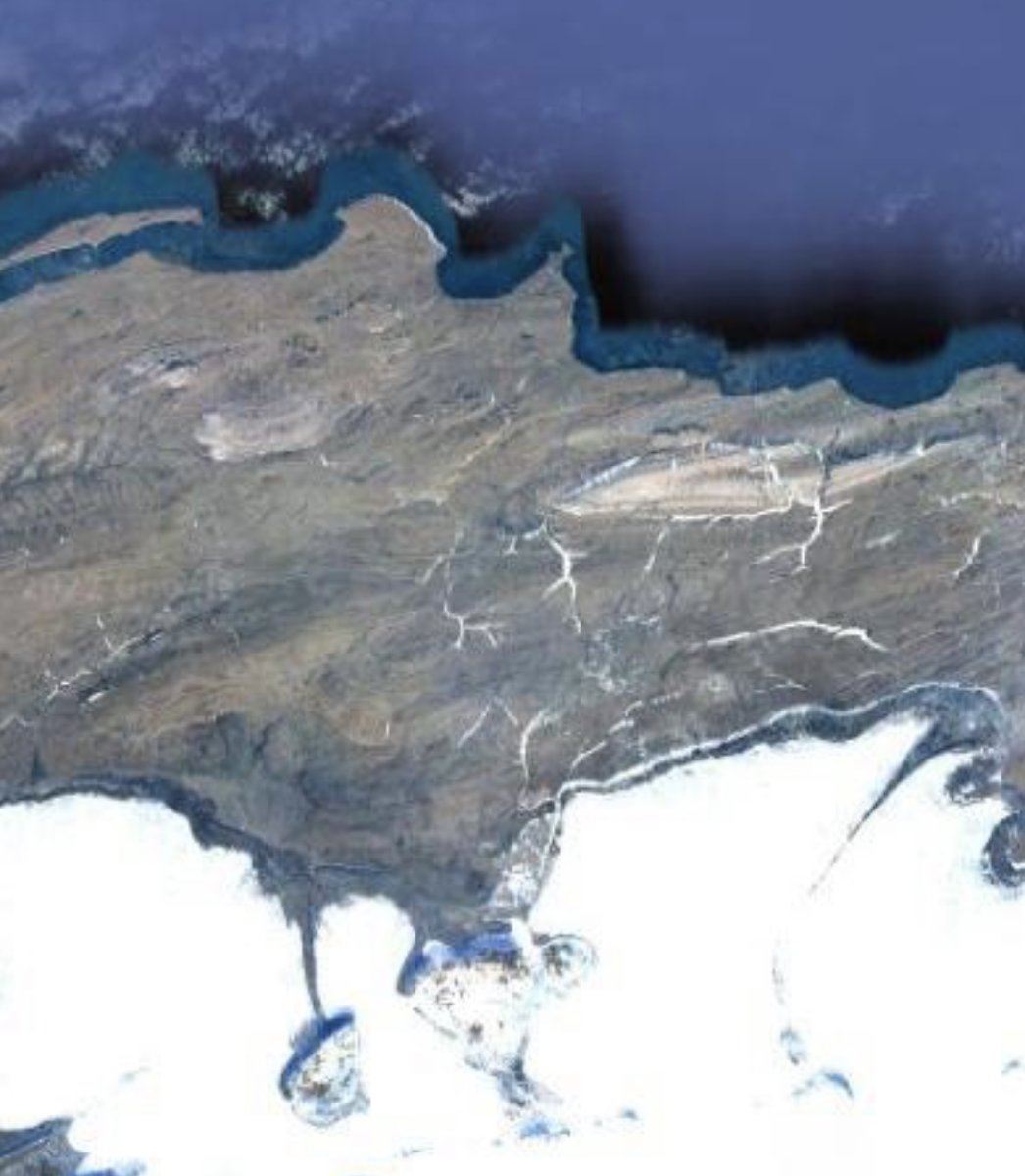 notice here, the spot in the middle. Clearly patched in. I know these are all composite images, a veritable quilt if you will. But all across the three platforms, this exact spot is out of place. On google maps, there are also some brightly colored artifacts due southeast of the odd patch (you can see more than the one if you load the map and pan) 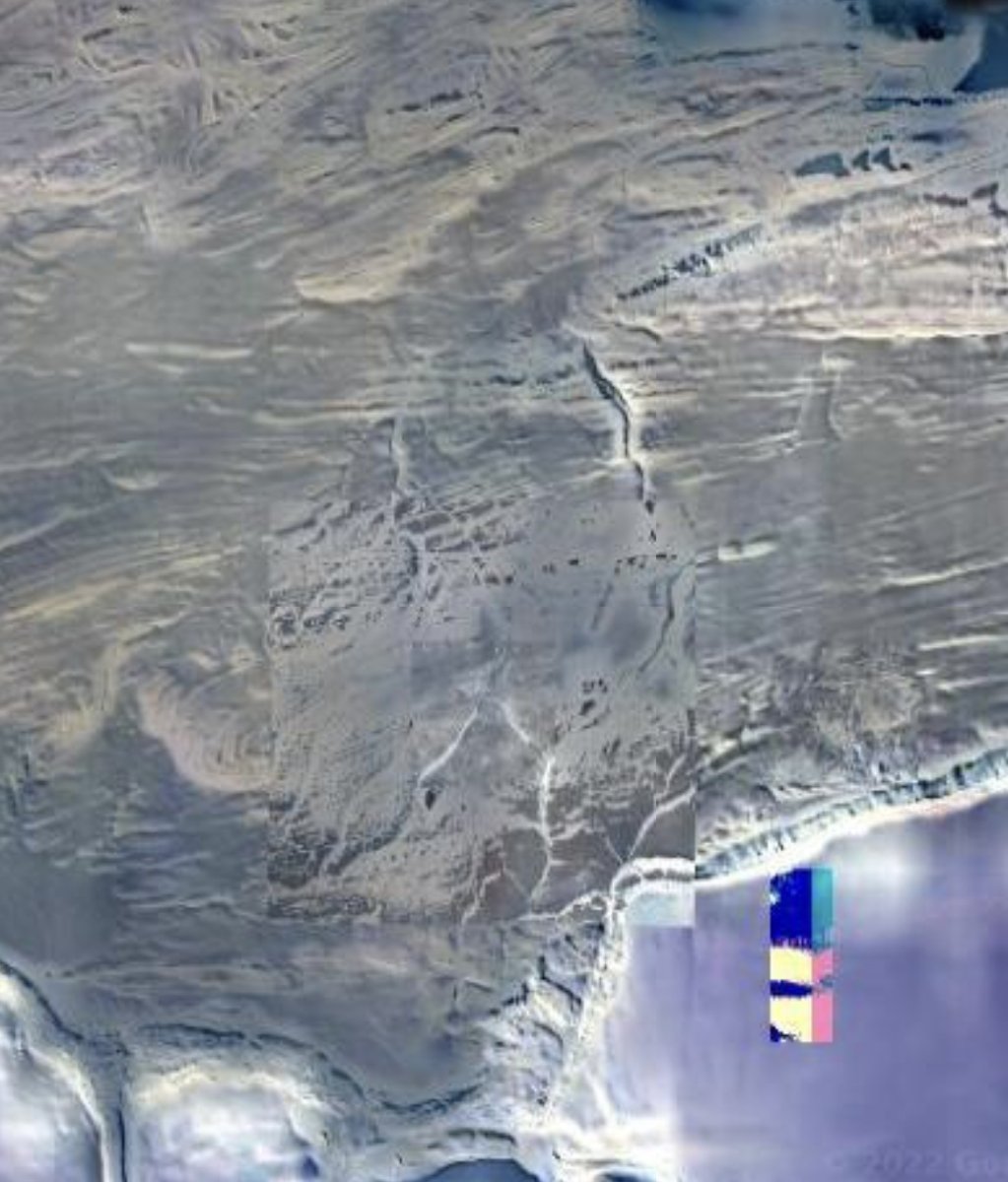 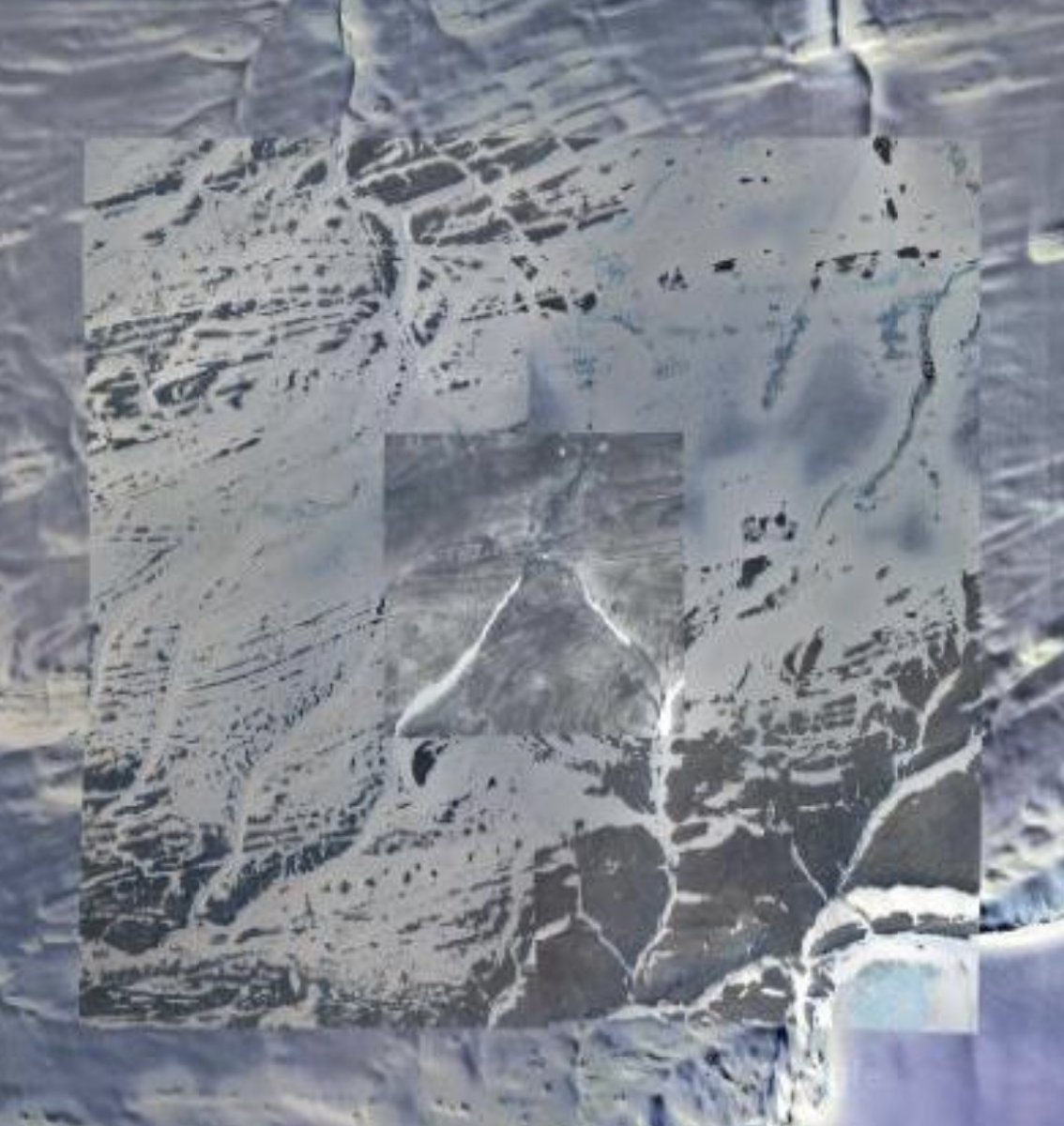 What necessitated using imagery from a different “photo session” in this spot? Above images captured from google maps. 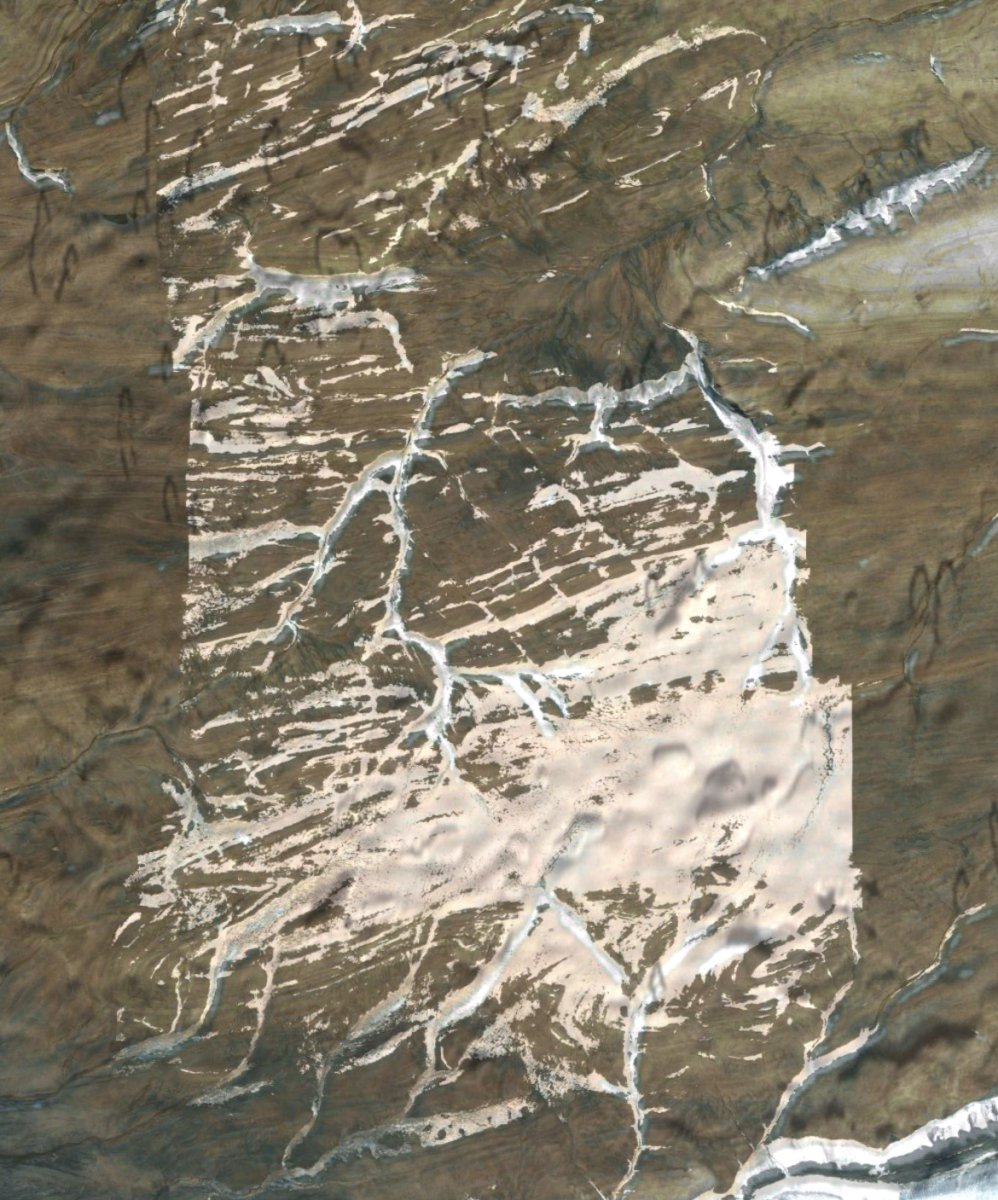 And last but not least, arcgis/earthstar: 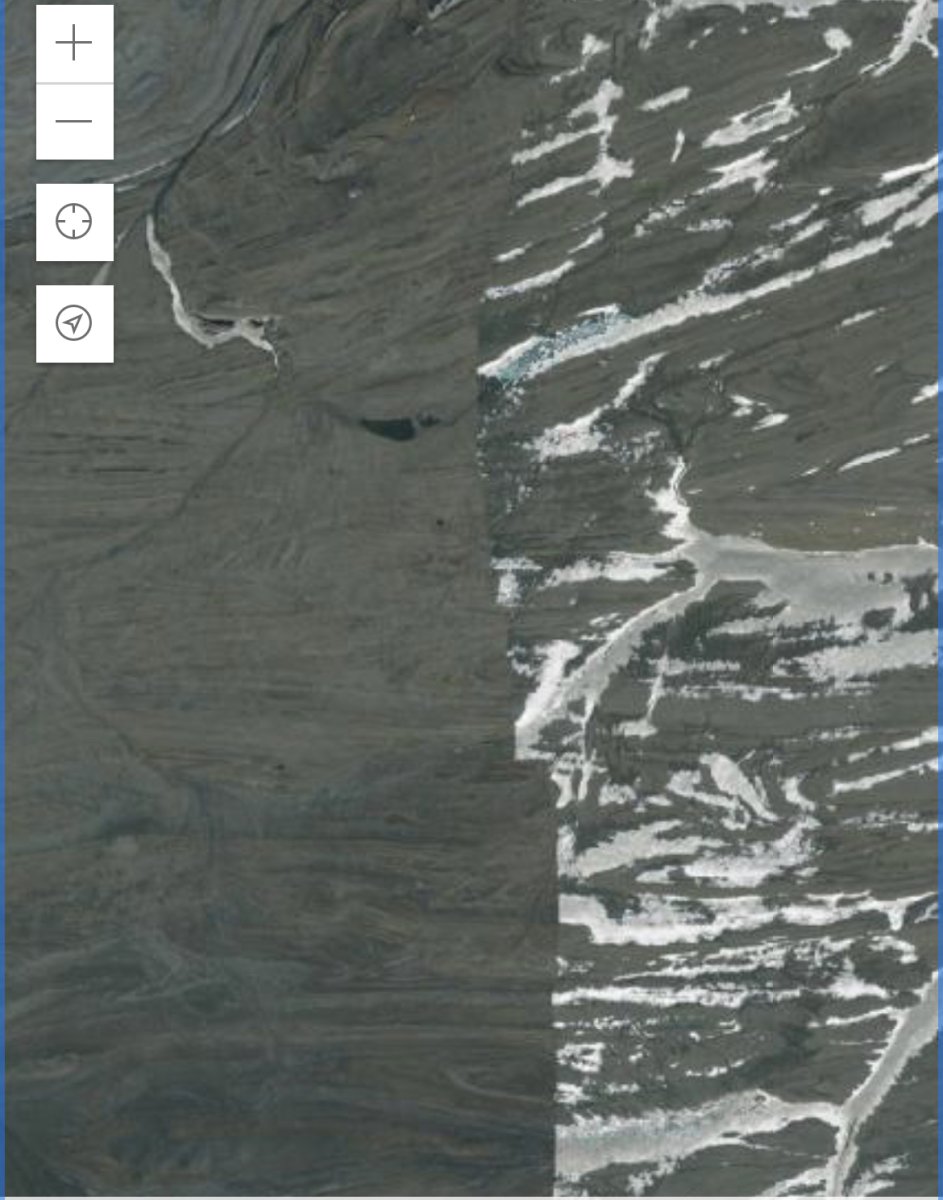 ​
Arcgis wasn’t playing nicely on my mobile device, so I had to zoom in on the border to show the crop job. It’s a zoom in of about 1/3 down the left side of the crop. Arcgis and apple appear to be sharing the same images.

it seems that if you decide to zoom in, you can only see snow-covered land.

EDIT:
Well, contrary to the title of Russians hiding things, Yandex provided the only barren image of the area. Much ado about nothing it seems. 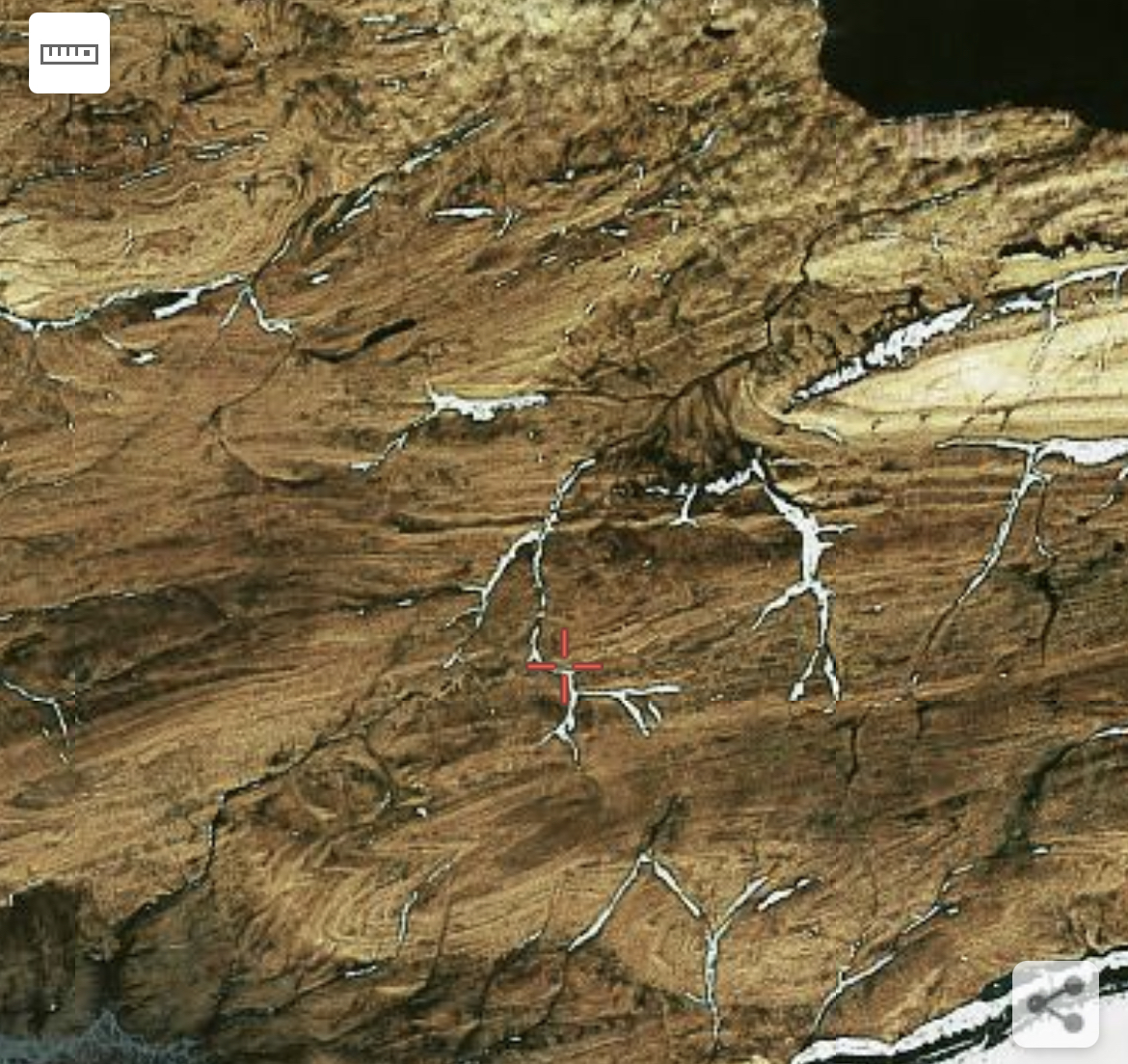 Other than the razing lines of the earth destroyer.
Last edited: Jun 27, 2022
S

I was looking at DNA haplogroup maps for anomolies and ran across this one, the main female line DNA for the Norwegian/Norse people. It really supports the theory of land in northern Russia being completely obliterated in the fairly recent past.

The Norse were seafaring fighters who populated every coast they could reach. They were on boats, moving along coastlines and anchoring frequently to go ashore and get water, hunt, trade, conquer, maybe rape and pillage a little. The point being that they didn't skip large portions of coastline on their journeys.

This map shows the spread and concentration of the Norse people over the course of their distinct DNA history, maybe 20,000 years (if that chronology is accurate). You can see they hit every single coastline near them and far from them as well, but somehow managed to bypass a vast swath of land near Novaya Zemlya on their way to populate the northeast coast? You can see a few spots of Norse blood north of Novaya Zemlya, and a strong concentration on the coast of modern Siberia, but none in between. This doesn't fit with the Norse lifestyle of trading and settling OR logistically work for feeding themselves while travelling by boat.

Clearly, there was once a series of Norse settlements between the west and the east, and those settlements and settlers were destroyed. Whatever shape the previous coastline had, it would have had Norse people living along every inch of it, just like on the rest of the map area that they could get to by boat.

I'm going to look for some Asian DNA maps as well for evidence. It's difficult to find maps for that part of the worlds' DNA. The maps are mostly greyed out there due to "sparse population". Of course it's sparse if you blow it up, poison the land and kill the people!!
Please forgive me if the image is not centered.