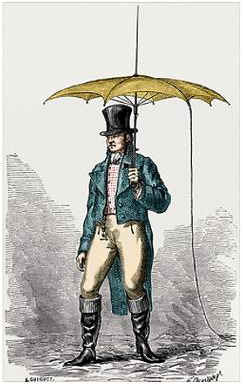 1770s​
It appears that a time specific necessity is being dismissed as an insignificant fashion style of the past. There is nothing better to have other than a wire cable dragging behind pulling back on your umbrella, or tagging on your hat.

Gentlemen could simultaneously work on strengthening those dominant arm muscles as they strolled along in a rainy, or may be even dry weather. 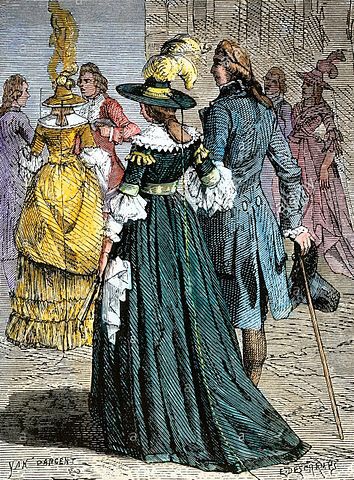 Ladies could improve their angelic posture by constantly using those neck muscles to drag that dirty metal rope around.

Six or seven feet of electrifyingly unifying metal, snaking in one’s wake. After all, what else could bring two genders closer to each other?

The official history tells us the following:

Once again we are being misled by the official pseudo-history. A little bit of research into the 18th/19th century atmospheric conditions could explain where the motivation to drag around that dirty wire was coming from.
If you think that above example is an oddity, please feel free to familiarize yourself with the below article.
It would be a sign of disrespect, and inconsistency of logic to suggest that our ancestors were smart enough to carve carnelian masterpiece rings 5,000 years ago, while simultaneously getting killed in droves by lightning, and doing nothing about it.

Mr. Franklin outdid all of them physicists of Newton’s caliber, as well as other over-educated individuals who came before him. He invented a lightning rod and solved a global problem.

KD: it appears there was no need for lightning rods prior to a certain moment in time which could coincides with the life span of Benjamin Franklin. Yet, our historians will go the distance to prevent general public from knowing that atmospheric conditions suffered a drastic change as recently as 200-400 years ago.

I can understand this position of the officials. What if the general public asked why those atmospheric conditions got changed...

It appears, 200-250 years ago, there was a fairly high probability of getting wacked by a bolt of lightning, and those poor people were simply trying to up their chances, and avoid getting killed. Therefore it was not a fashion, it was a necessity (imo).

Here's an old world building that lights up with electricity in the right conditions. Possibly this is why the hats and umbrellas were necessary. Everything was charged up, perhaps.

Somehow, two OP images are the only ones we have to account for this entire fashion movement. I was unable to find any other ones.
You must log in or register to reply here.
Similar articles