This is an FYI type article, the contents of which I do find interesting nevertheless. May be at some point we will understand the 19th century infrastructure capabilities. As it stands we are left to marvel various technological innovations those people were able to come up with in between fighting wars, with limited population numbers and with inferior education and education system. Well, at least this is the general concept we get through our education. Here is one additional mode of transportation available back in the day. 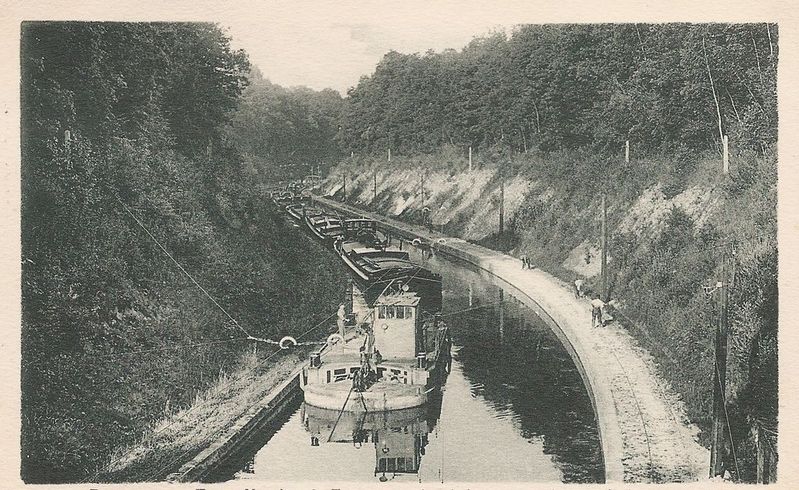 As far as I understand one of the very first canals to have trolley boat travel tested on was the Erie Canal. 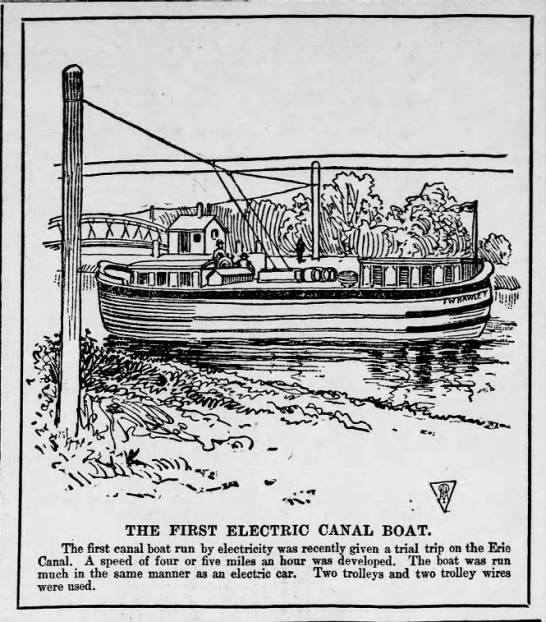 At the same time, just like with anything else, time frames are probably flexible, for this is a tiny snippet from an 1872 publication.

This article goes hand in hand with some of the canals built in the 19th century.


Canal Trolley Boats​
A trolley boat (a descriptive neologism not used contemporaneously) is an electrically driven boat on canals and particularly in canal tunnels. It takes its energy like a tram or trolleybus from one or two overhead wires respectively. One of the first alternatives for animal power was the trolley propeller system. Only four years after the first experimental trolleybus, Frank W. Hawley adapted an ordinary steam canal boat to a trolleyboat (named after him), which was tested on the Erie Canal in the US in 1893. 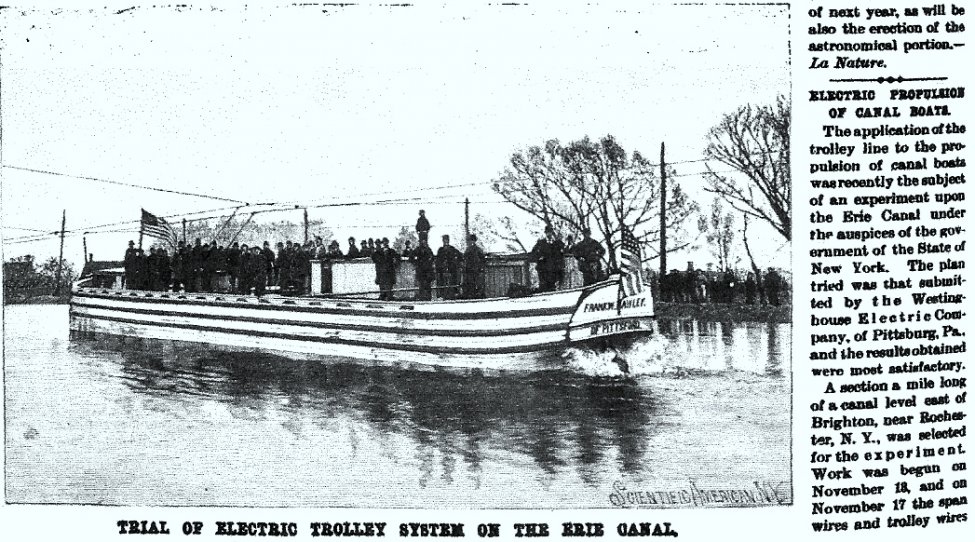 The two electric motors (of 25 HP each) powered two screw propellers and received current from a pair of wires suspended over the canal through two ordinary underbearing trolley poles. 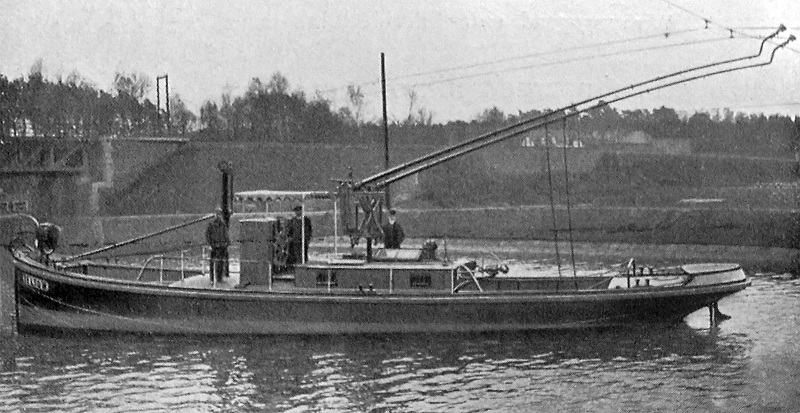 As the boat had more or less lateral movement, the contact arrangement had to be flexible, and as the canal could not be used as a return, a double metallic circuit had to be used. This necessitated two wires for boats going in each direction. 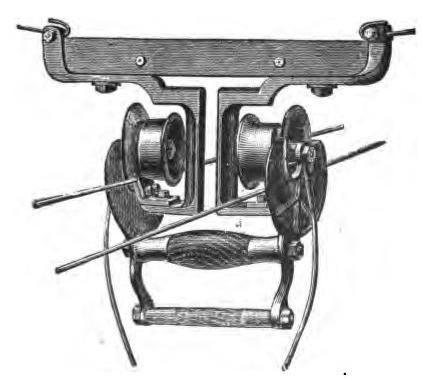 ​
Below is a picture of what seems to be the only propeller powered trolleyboat line that was ever operated in a commercial way. It was installed along a 4 kilometre (2.5 miles) stretch of the Charleroi Canal in Belgium in 1899. The trolleyboats towed unpowered canal barges. The line formed part of a 47 kilometre (29 miles) long trajectory served by electric mules and was only operated for a couple of years. 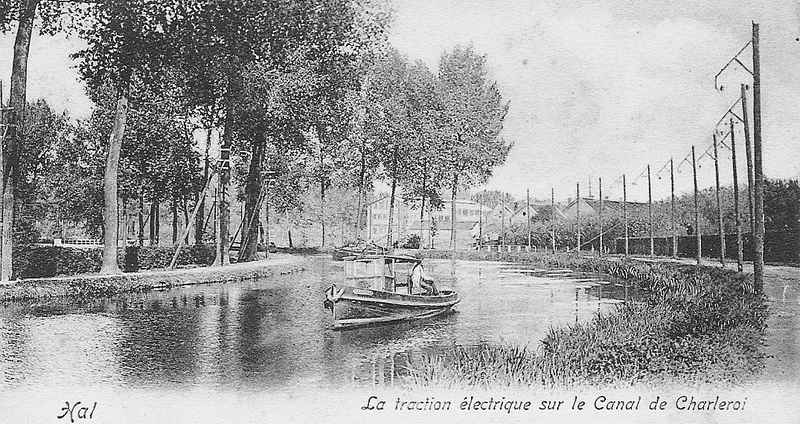 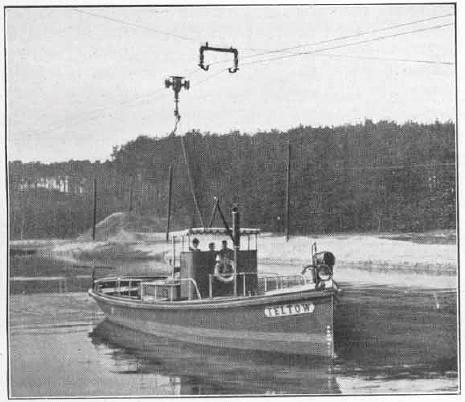 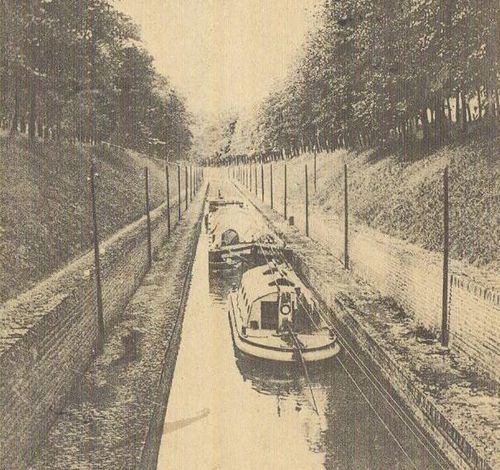 KD: Anyways, I figured to share this little thing I ran into. For those interested in gaining further knowledge please visit the below linked webpage I quoted from.