Some things just do not make sense. I can't imagine a "cloud" like the one described below visiting our world today. An act of war comes to mind. Anyways, judge for yourself, but I'm leaning towards some tech we are not allowed to know about. 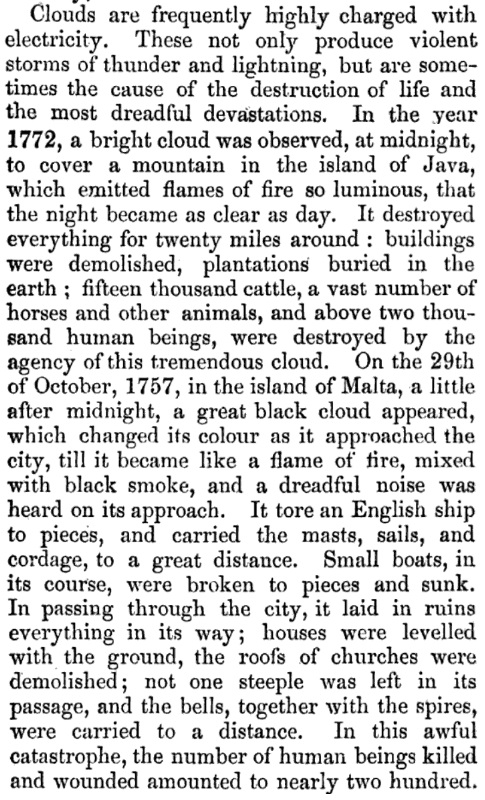 This woman has incredible knowledge about black goo nanotechnology, geoengineering and dark tech wielded by the satanic controllers. I am blown away, truly.
ExtremeRealiyCheck

KorbenDallas said:
Some things just do not make sense. I can't imagine a "cloud" like the one described below visiting our world today. An act of war comes to mind. Anyways, judge for yourself, but I'm leaning towards some tech we are not allowed to know about.

The events in 1757 could be a pyroclastic flow caused by volcanic activity. Further researching possible historic records on and possible sources of this particular flow lead me to the island "Volcano", which is part of the Aeolian Islands, Italy.

J. Selva, C. Bonadonna, S. Branca, G. De Astis, S. Gambino, A. Paonita, M. Pistolesi, T. Ricci, R. Sulpizio, A. Tibaldi, A. Ricciardi,
Multiple hazards and paths to eruptions: A review of the volcanic system of Vulcano (Aeolian Islands, Italy),
Earth-Science Reviews,
Volume 207,
2020,
103186,
ISSN 0012-8252,
Redirecting.
(Multiple hazards and paths to eruptions: A review of the volcanic system of Vulcano (Aeolian Islands, Italy))
Abstract: Vulcano is one of the 7 volcanic islands and 6 seamounts forming the Aeolian volcanic district (Italy). Vulcano has a long eruptive record, and its last eruption (1888–90 AD) originated the definition of the Vulcanian eruptive style. Like most volcanic islands, Vulcano generates many potentially interconnected hazards, determining a potentially high risk. Here, we review the state of knowledge on its geology, eruptive activity, historical accounts, structural setting, geophysical and geochemical surveillance, and available hazard assessment, in order to have an updated picture of the state knowledge on volcanic hazard. We follow a prototypal reviewing scheme, based on three standardized steps: i) review of the volcanic system; ii) review of available eruptive and non-eruptive hazard quantifications; iii) development of a conceptual interpretative model. We find that, while a rather vast literature is dedicated to the volcanic system of Vulcano and the reconstruction of past events, few quantitative hazard assessments exist. In addition, the range of natural variability considered for each hazard is potentially underestimated (e.g. limited range of considered eruption magnitude and style and of vent position), as it is the potential effect of multi-hazard impact. The developed conceptual model for the feeding system provides a synthetic picture of the present knowledge about the system, as emerged from the review. In addition, it allows for the identification of potential paths-to-eruption and provides a first order link among the main hazards. This review provides an up-to-date snapshot of existing knowledge on volcanic hazard at Vulcano on which to build future hazard quantifications as well as to support present and future decision making.
Keywords: Vulcano; Aeolian volcanic district; volcanic islands; volcanic hazards; types of unrest; conceptual model
Click to expand...


These three bold sources in this table row are given in the paper:
This is how real pyroclastic flows look like:

​
All nice and good, until you look at the map. Right north of Malta is Sicily, behind that, about 400 km away from Malta, are the Aeolin Islands of Italy, which appear tiny in comparison to the size of entire Sicily, that sits between Malta and the islands.

On the other hand it should be clear that a pyroclastic flow can in fact cause damages within the order of cataclysmic order, and the only witnesses who can survive and report on such an incident are those which are on the edge of the pyroclastic flow's spread.

The following image by the U.S. Geological Survey, also found in Wikipedia, is captioned with: "Building remnant in Francisco Leon destroyed by pyroclastic surges and flows during eruption of El Chichon volcano in Mexico 1982. Reinforcement rods in concrete bend in direction of flow." Checking this on the map tells me a distance of 2 km between the municipality of Francisco León and the actual El Chichon volcano. 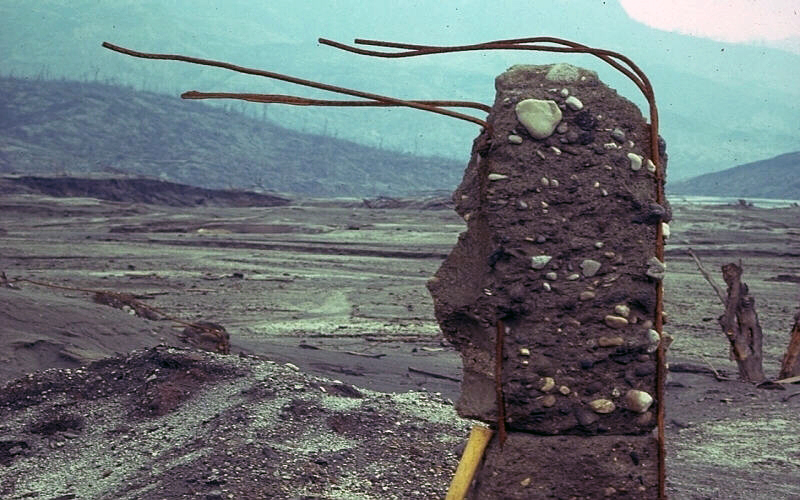 I wonder if a physicist or geologist could make an approximate calculation of the 1757 event? I wonder if the intensity of a pyroclastic flow is following the inverse-square law, like light does. If a volcano is the sole source of the pyroclastic flow it could be looked at like a point-source and the intensity of the flow being inversely proportional to the square of the distance. This would mean the 400 km distant event would have been 4^2 x, that is 16 x greater in magnitude, than an event that would have caused a pyroclastic flow that reaches out 100 km, according to Wikipedia. This is entering a cataclysmic magnitude without a doubt.

The U.S. Geological Survey has more:

How dangerous are pyroclastic flows?​
A pyroclastic flow is a hot (typically >800 °C, or >1,500 °F ), chaotic mixture of rock fragments, gas, and ash that travels rapidly (tens of meters per second) away from a volcanic vent or collapsing flow front. Pyroclastic flows can be extremely destructive and deadly because of their high temperature and mobility. For example, during the 1902 eruption of Mont Pelee in Martinique (West Indies), a pyroclastic flow (also known as a “nuee ardente”) demolished the coastal city of St. Pierre, killing nearly 30,000 inhabitants.
Click to expand...

St. Pierre was 10 km away from the eruption. I highly doubt the story of De Fiore 1922 and Barbano et al. from 2017, that eruptions of an Aeolian Island was the source of the 1757 destruction in Malta, simply because of the 400 km distance. It might well be another smaller event, that nobody has recorded, that happened somewhere closer to Malta of the geological highly active mediterranean sea.

It would be interesting if underwater volcanos can create such flows. Researching "water" and "pyroclastic flow" I found this:

"Pyroclastic flows may result in flooding as streams are blocked or rerouted by the flow. Floods may also occur when the flow of hot material melts snow and ice, swelling rivers and streams beyond their banks. A mudflow containing volcanic material, called a lahar, may also form when the rock of the pyroclastic flow mixes with water to become a quickly moving slurry.", Source: National Geographic on Pyroclastic Flows)
Click to expand...

Because I am reading also other posts on this website (esp. this one), I should mention the Battle of Plassey (Wikipedia) between the British and the Bengals taking place in June 1757, 8000 km away from Malta. And of course, the dates can all be falsified.

Pyroclastic flows of the dimension suggested by De Fiore and Barbano et al., which is 400 km long, would have been caused by eruptions which must be so large, that the effects of it would be globally perceived (as in darkening of the sky, secondary weather events, climate changes and crop failures).
Last edited: Aug 15, 2021

This sounds like a mushroom cloud from a nuke. Although, Iam not convinced they exist. But some kind of huge explosion, perhaps a meteor or something. Very interesting however.

I personally like the very next section after the part KD snipped out:

Oh, back when you could essentially dismiss highly anomalous events as 'mere" acts of God. For better or worse, that's not how the propaganda machines work anymore. Different lies for different paradigms.

Nowadays, it's arguably easier. I can just assume these people were stupid and exaggerating if they can't conform to my version of reality!

Edit: Not exactly what the OP describes, but very recent:

Last edited: Sep 8, 2021
You must log in or register to reply here.
Similar articles