It is somewhat safe to say, that in the 19th century (including early 20th century, and earlier than 19th of course) there was an alternate building technology. May be there was nothing special about it, but then again, what's there so special about our today's construction tech. At the same time, it does appear, that certain parts of the 19th century construction were taken out of the equation. One of those parts, in my opinion, was the artificial nature of the stones used. Today we are being presented with simply marble, granite, limestone, etc. It starts to appear, that none of those stone were natural, but rather had polymeric values. The other part which appears to be omitted is the kit nature of the buildings. In other words, those 19th century construction workers were playing with some sort of an adult legos.

Let 's take a look at some construction photographs of the State, War and Navy building in Washington DC.

It was built between 1871 and 1888, on the site of the original 1800 War/State/Navy Building and the White House stables, in the French Second Empire style. While the building exterior received substantial criticism at first, it has since been designated as a National Historic Landmark. It was for years the world's largest office building, with 566 rooms and about ten acres of floor space. Many White House employees have their offices in the EEOB.
The building looks alright to me, but what do I know? I know (the narrative says so) that it took 17 years to get it built (1871-1888).
I know that the government normally goes for the lowest bidder, but common... 17 years? What about some other master builders out there?

The Construction​
I think it makes sense to brake the construction portion of this article into several section. Not all of these sections are directly construction related but they all pertain to the final outcome, the building itself.


Photo Anomalies​
I think photographic anomalies matter. They force explanations, with some of those being pretty ugly. Let us take a look at the below 1917 image of the completed building. The image is titled:
Let's ignore the gray sky, and that the population numbers of the Washington DC in 1917 were around 400,000 people. For the sake of the argument this is 6 am on Sunday morning, and a few dudes decided to do some rail maintenance. 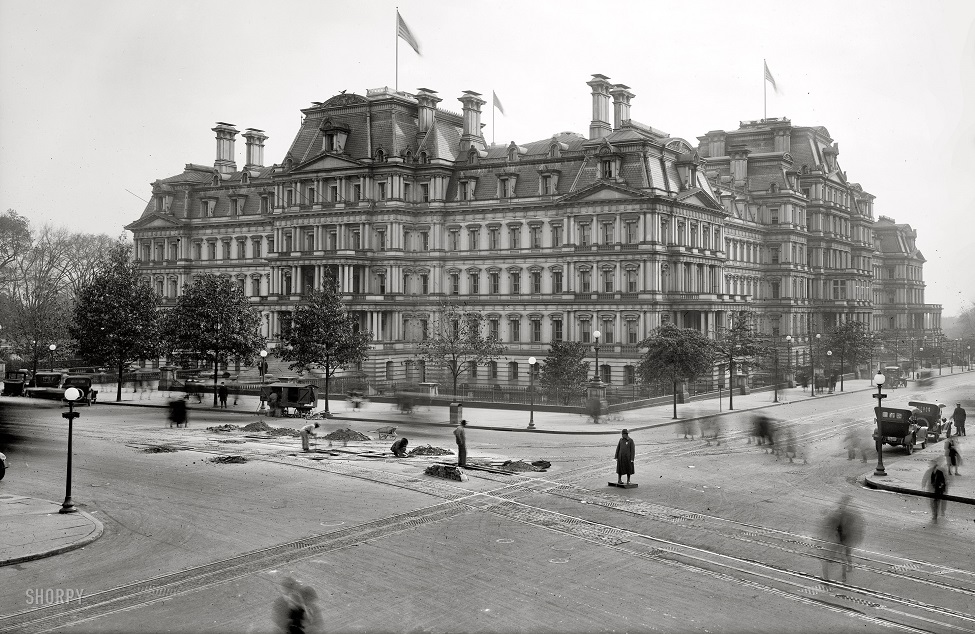 What year photographic equipment is being used here? Judging by the available cars we are dealing with 1917 indeed. Judging by the photo camera used, we are somewhere in the late 1840s.
There were hundreds of photographs in motion made prior to 1884. Yet, in 1917 we have those blurry walking figures. Is this being done on purpose, or the photographer whooped out some 50 year old photo camera?


Construction: transportation​
We can agree to disagree that anything was possible, and they could have employed many men, horses and oxen to deliver a "brick" like the one below. This would, pretty much, be the same technology used in some 5th century BC, but do we really care about that? Who really cares that some 50 years prior to the construction of this building there was a highly unpopular way to transport things?
Things could only move on rails in the early 1870s, right? With half of those being pulled by horses too. Yet, in the 1820s they did just fine with no rails... 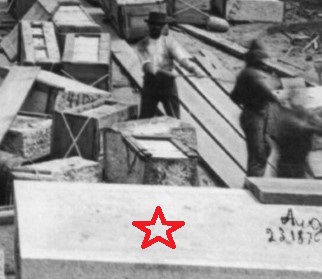 Construction: kit structure​
This is just my opinion, but the construction technology we scrutinizing was based on a "kit house" principle. In other words, buildings, no matter the complexity, were pre-made somewhere else, and assembled at the construction site.


Nov 25th was written over the box marking 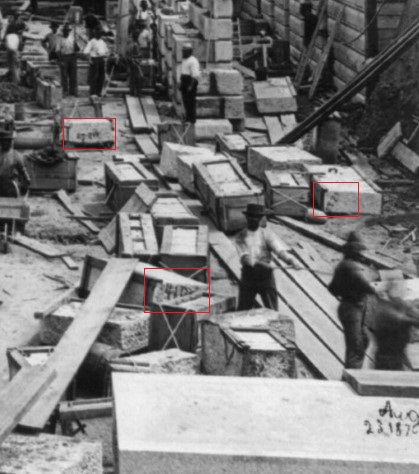 Source
​
As you can see, the blocks arrived pre-shaped, and numbered. Well, that's what it looks like to me.


Construction: limestone cutting​
Apparently, there is nothing special in cutting yourself some limestone with a hand saw. Of course, today it is much easier to use a circular saw. As you can see, the dude below wants to show us that he is doing just that. Never mind that he is not really dressed for some hard labor. He has a handsaw in his possession, and there is a cut up block next to him.

Construction: Artificial Stone​
For a beautiful construction analysis of an old building please feel free to visit the below link (#1). It was apparently put together by one of the Russian bloggers. Apologies for not remembering the nicknames, but both of the below links were mentioned elsewhere by the SH blog members. The contents are kind of an eye opener. There is way more than artificial stone in there, so enjoy.

Dates Everywhere​
I'm pretty sure you have seen a few instances, above. There is an additional one below. For whatever reason, we have to be constantly reminded what date we are observing. In other words, there has to be no doubt in the viewers mind, that we are seeing 1885. Never mind that placing painting the date on some construction shack looks looks weird at the very least. 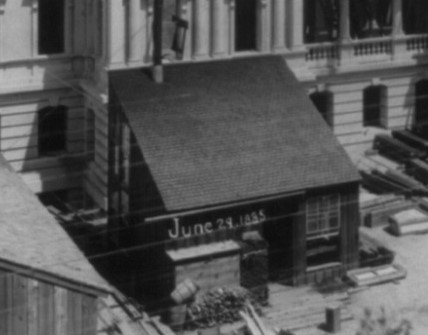 Source​
On the other hand, may be somebody wanted to get creative, and photo-edited the date into the photograph. The same shack below does not have the date on it, but this changes only so much. 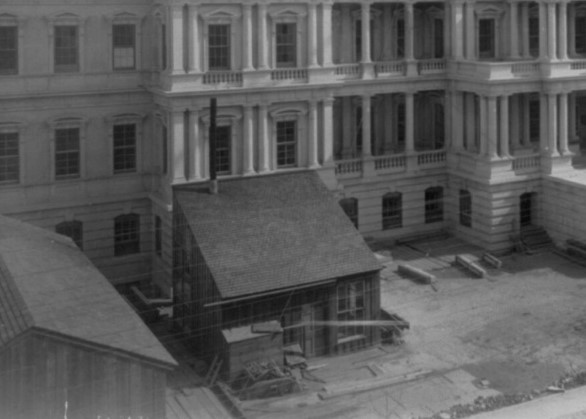 Source
​
Source of the article images:

KD: What do you think was so special about these buildings that we "lost this technology?" Could it be that we simply ran out of the pre-made kits?
Click to expand...