Yukon Dempster Highway: exists or not?

The Dempster Highway, also referred to as Yukon Highway 5 and Northwest Territories Highway 8, is a highway in Canada that connects the Klondike Highway in Yukon to Inuvik, Northwest Territories on the Mackenzie River delta. The highway crosses the Peel River and the Mackenzie Rivers using a combination of seasonal ferry service and ice bridges. Year-round road access from Inuvik to Tuktoyaktuk opened in November 2017 with the completion of the Inuvik-Tuktoyaktuk Highway, creating the first all-weather road route, connecting to the Canadian road network with the Arctic Ocean, in Canada.

Google Maps: Dempster Highway​
On Google Maps nothing appears to be out of the ordinary. The road appears to be what you'd expect. It starts where it is supposed to and ends where it should. In other words it goes from Inuvik to Tuktoyaktuk, or vice versa. It does not matter how much you zoom in, the road is there.

ArcGIS Maps: Dempster Highway​
But when looked at via ArcGIS maps, we end up with a phantom road. It only exists when zoomed out. Yet, when we zoom in we end up with the below setup. 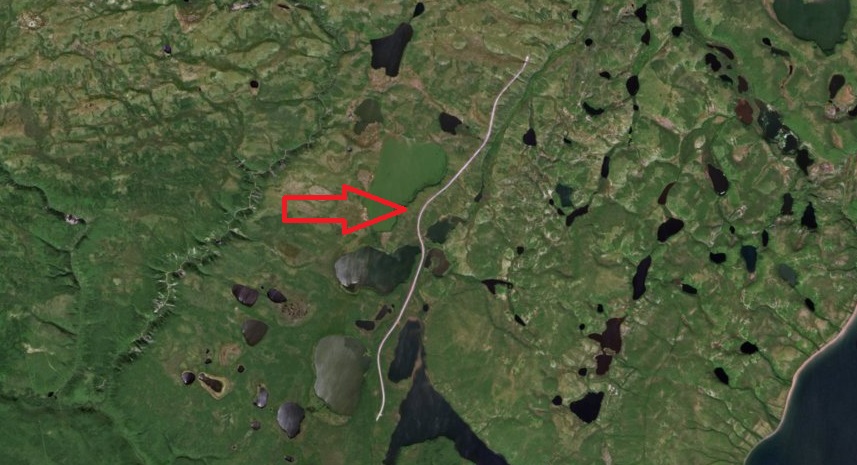 ​
I thought it was just a glitch, but when zoomed in close enough, we can see that this road actually has ends. The south end looks a bit strange, but the north end appears to be legit.

General Area​
The general area where our Dempster Highway, allegedly going from Inuvik to Tuktoyaktuk, perfectly fits the below SH thread. In general, whatever produced the Hudson Bay, tore surrounding lands to pieces. If the area was populated before the emergence of the H-Bay, we can only imagine hat happened to all those people.

Some of this inconsistency could probably be explained by the Construction History of our Dempster Highway. I don't know... may be the areal photograph was taken before the road was completed, but... who starts building a road in the middle.

KorbenDallas said:
Some of this inconsistency could probably be explained by the Construction History of our Dempster Highway. I don't know... may be the areal photograph was taken before the road was completed, b
Click to expand...

From what I'm gathering, the Dempster Highway is strictly the route from Dawson City to Inuvik. That's what you have provided the construction history for (completed in 1979). The section in question is apparently just the Inuvik-Tuktoyaktuk Highway, completed in 2017. Just mentioning because your post was somewhat confusing with the labeling. This video below comments on that designation and shows a timelapse of someone driving it:

There are more videos on YouTube showing people driving the highway, seems fairly credible to me. In this case, it seems reasonable that the aerial photos you are showing occurred prior to 2017. So, I'd say the Dempster Highway definitely exists, the Inuvik-Tuktoyaktuk Highway also seems to, but whether there was a pre-existing infrastructure of some kind in that area... well, that's always the open question, it seems.

In general though, I think we are definitely given the impression that our transportation infrastructure is better than it actually is, which also then gives us the impression that our maps have to be completely accurate. There are admittedly several areas with large gaps, like Nome to Fairbanks (520 miles, no roads) and in the northeastern portion of Russia. Also, and I didn't know this until recently, you can't even drive from North America to South America!

The Pan-American Highway also has a corresponding gap of 106 km (66 mi), beginning at Turbo, Colombia, and ending at Yaviza, Panama. Roadbuilding through this area is expensive and detrimental to the environment. Political consensus in favor of road construction collapsed after an initial attempt failed in the early 1970s, resuming in 1992 only to be halted by serious environmental concerns, and to date has not reemerged.
Click to expand...

That arrow is pointing yo a 14" corrugated metal tube. It let's water drain from one side to the other without flooding the road.
You must log in or register to reply here.
Similar articles