Tartarian City of Norumbega was conquered to become Washington, DC

The initial article ended up being bigger than I expected. To avoid having a 10 mile long page, it was logical to create a Part II of sots. So, if you did not read the beginning of what follows below, please familiarize yourself with Part I of the City of Norumbega topic. It's somewhat of a prerequisite, I guess.

Washington D.C. and Co.​
Had a chance to sleep on this entire topic. I think the area named Nurumbega was a part of the Tartarian Union with the city visited by David Ingram being the City of Bega, or the City of Nurumbega. Was the city actually named Nurumbega? I do not know, could be either way.

The City of Bega (to become Washington DC in my opinion) was not the only city in Nurumbega Region. The list of the pre-existing Nurumbega region cities is not limited to the below ones:
Obviously we do not know what the original names of the above locations were. I think whoever's holding those 300 year old classified documents could indulge us. They obviously will not, but they are the ones who know WHAT and WHY.


Washington D.C. History
wiki version​
The United States capital was originally located in Philadelphia. In June 1783, a mob of angry soldiers converged upon Independence Hall to demand payment for their service during the American Revolutionary War. 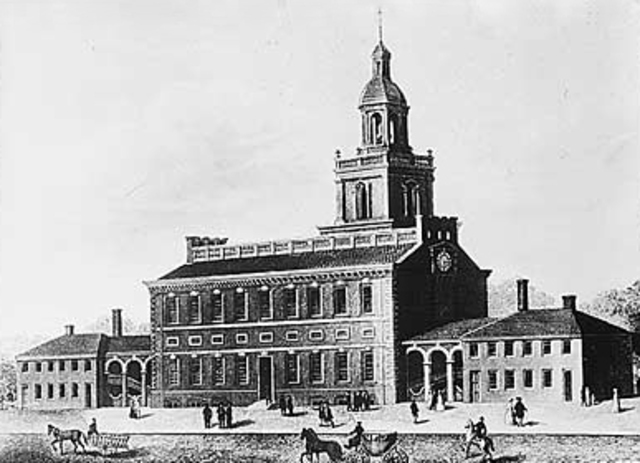 Congress requested that John Dickinson, the governor of Pennsylvania, call up the militia to defend Congress from attacks by the protesters. In what became known as the Pennsylvania Mutiny of 1783, Dickinson sympathized with the protesters and refused to remove them from Philadelphia.
As a result, Congress was forced to flee to Princeton, New Jersey, on June 21, 1783. Dickinson's failure to protect the institutions of the national government was discussed at the Philadelphia Convention in 1787. The delegates therefore agreed in Article One, Section 8, of the United States Constitution to give the Congress the power:
On December 23, 1788, the Maryland General Assembly passed an act, allowing it to cede land for the federal district. The Virginia General Assembly followed suit on December 3, 1789. The signing of the federal Residence Act on July 16, 1790, mandated that the site for the permanent seat of government, "not exceeding ten miles square" (100 square miles), be located on the "river Potomack, at some place between the mouths of the Eastern-Branch and Connogochegue". The "Eastern-Branch" is known today as the Anacostia River. The Connogocheque (Conococheague Creek) empties into the Potomac River upstream near Williamsport and Hagerstown, Maryland. The Residence Act limited to the Maryland side of the Potomac River the location of land that commissioners appointed by the President could acquire for federal use.
On March 30, 1791, Washington issued a presidential proclamation that established "Jones's point, the upper cape of Hunting Creek in Virginia" as the starting point for the federal district's boundary survey. The proclamation also described the method by which the survey should determine the district's boundaries. Working under the general supervision of the three commissioners and at the direction of President Washington, Major Andrew Ellicott, assisted by his brothers Benjamin and Joseph Ellicott, Isaac Roberdeau, Isaac Briggs, George Fenwick, and an African American astronomer, Benjamin Banneker, then proceeded to survey the borders of the Territory of Columbia with Virginia and Maryland during 1791 and 1792.

On January 1, 1793, Andrew Ellicott submitted to the commissioners a report that stated that the boundary survey had been completed and that all of the boundary marker stones had been set in place. Ellicott's report described the marker stones and contained a map that showed the boundaries and topographical features of the Territory of Columbia, The map identified the locations within the Territory of the planned City of Washington and its major streets, as well as the location of each boundary marker stone.


Plan of the City of Washington
wiki version​
In early 1791, President Washington appointed Pierre Charles L'Enfant to devise a plan for the new city in an area of land at the center of the federal territory that lay between the northeast shore of the Potomac River and the northwest shore of the Potomac's Eastern Branch. L'Enfant then designed in his "Plan of the city intended for the permanent seat of the government of the United States ... " the city's first layout, a grid centered on the United States Capitol, which would stand at the top of a hill (Jenkins Hill) on a longitude designated as 0,0°. The grid filled an area bounded by the Potomac River, the Eastern Branch (now named the Anacostia River), the base of an escarpment at the Atlantic Seaboard Fall Line along which a street (initially Boundary Street, now Florida Avenue) would later travel, and Rock Creek.

L'Enfant's 1791 Plan​
Original L'Enfant Plan of Washington from national archives. I was unable to find a bigger version of this particular "original". We do have an 1887 copy of the original provided by the Library of Congress. If interested in all the writings, make sure you check the copy out, some of the resolutions are incredible. 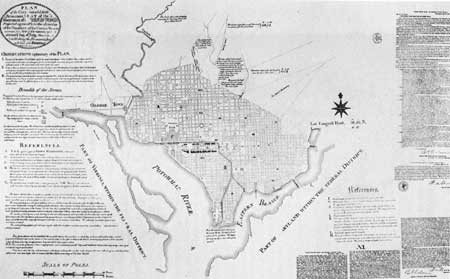 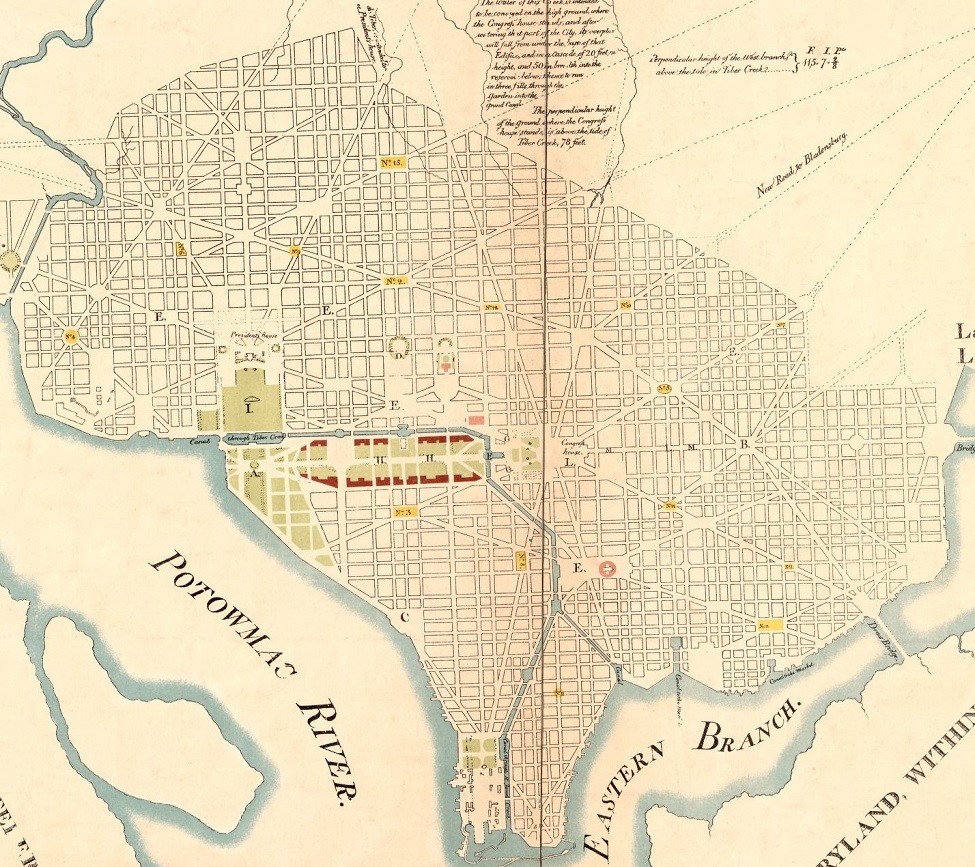 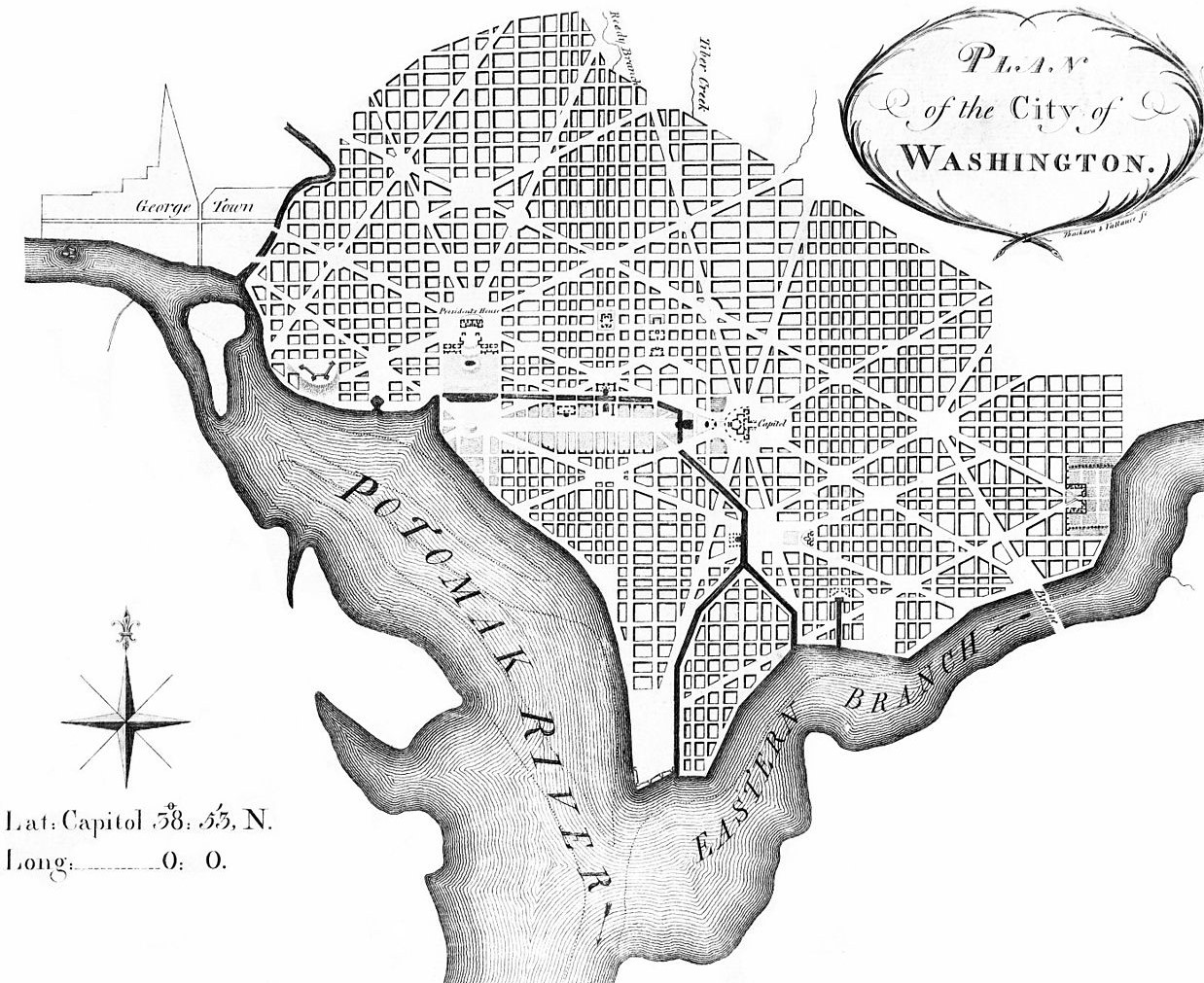 ​
Whatever the reason was, but Washington dismissed L'Enfant.
Ellicott gave the first version of his own plan to James Thakara and John Vallance of Philadelphia, who engraved, printed and published it. This version, printed in March 1792, was the first Washington city plan that received wide circulation. 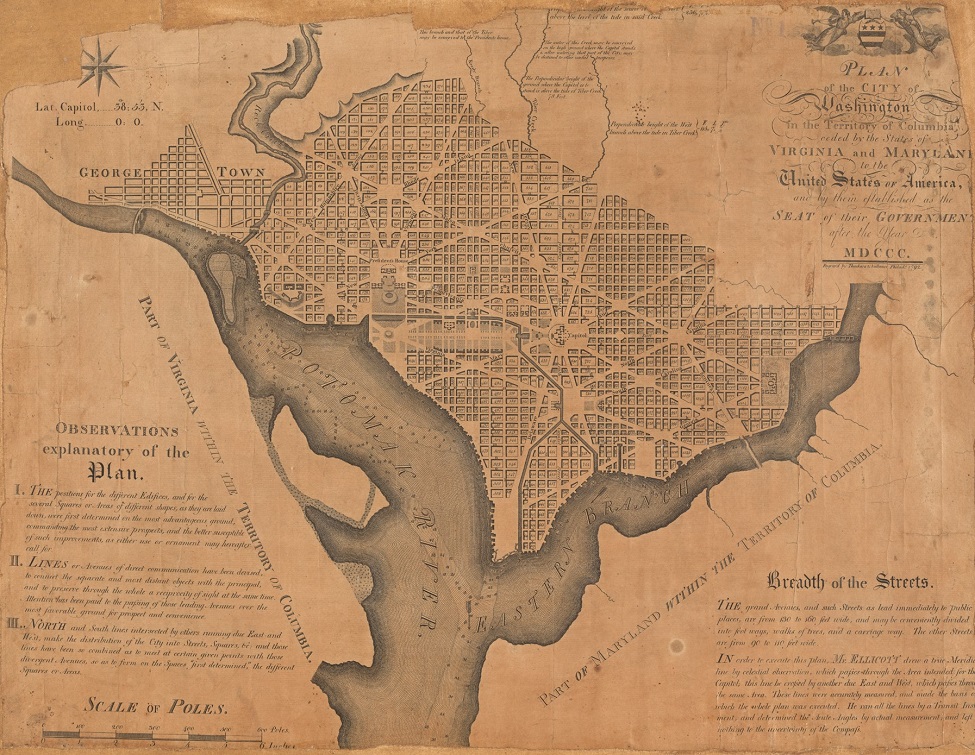 Real 1792 State of Washington, DC​
Here you can see what the Washington, DC area was supposed to look like in reality. To be clear, above are plans for future development. Below is what the area allegedly looked like in 1792. - source 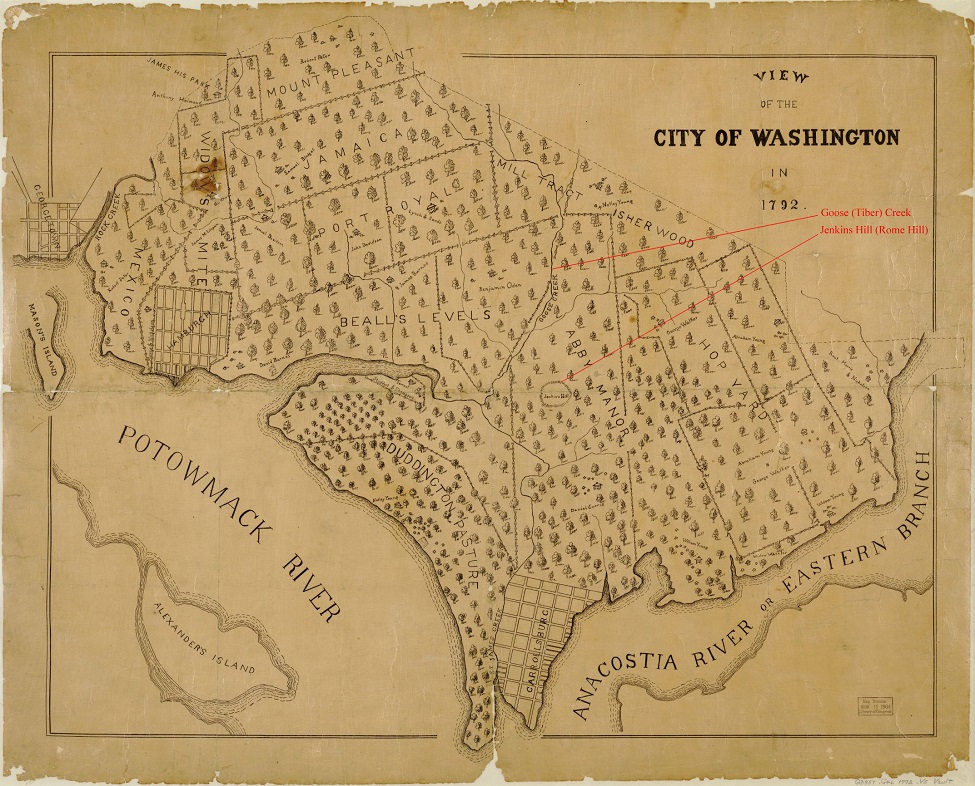 KD: By the way, I think we might experience a very similar map shenanigans pertaining to the list of the cities mentioned in the list mentioned above these plans.


Construction​
This is the point after which the construction was supposed to begin. According to the official version it had to. I have a different opinion on the matter. To a certain degree all this plan vs reality shenanigans reminded me of another city far away. They also claimed to have it built.

US vs. UK war of 1812​
Hopefully I'm not gonna get crucified for it, but in my opinion the City of Bega (later Washington, DC) remained under Tartarian control as late as 1812-1814. Suspicions coincidences rule our history. In this case we sure have a few very suspicious ones.

To understand my train of thought, you will probably have to familiarize yourself with the following article:
Back to the coincidences...


Coincidence #zero​
We have two initial events during which, according to my current hypothesis, Tartaria was attacked from the West first (in current Russia), and from the East second (in the US).
I do not know whether Tartaria was fighting back, or what, but something ended up causing the second conflict which materialized in what we know as the Wars of 1812. Once again in both Russia, and the United States.

Coincidence #3​
According to the uniform design, every single military of the day (besides the Tartarian one) had the same uniform provider. If you want to get really confused you can look at the 1812 uniforms in general, as they pertain to all the armies out there. For right now scroll on down below, and take a look at British vs. US, and at France vs. Russia. 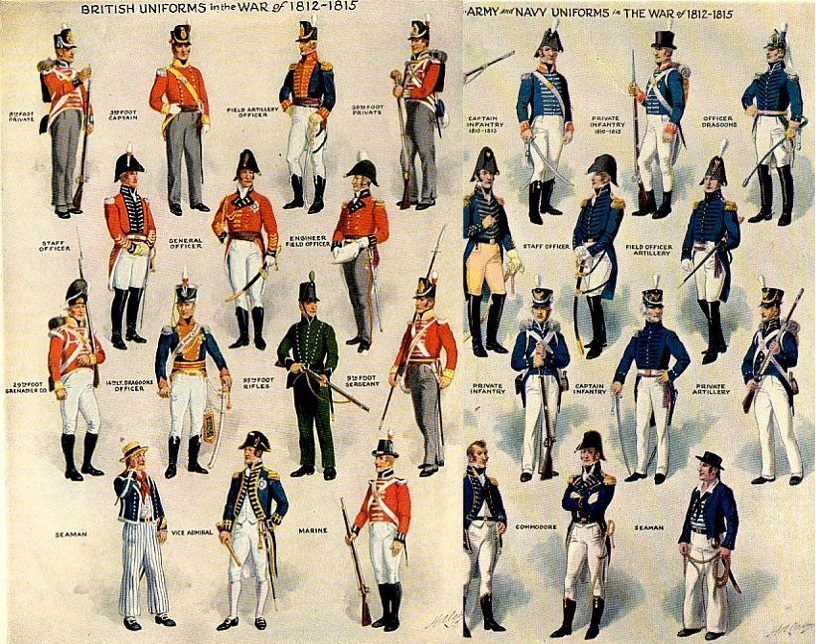 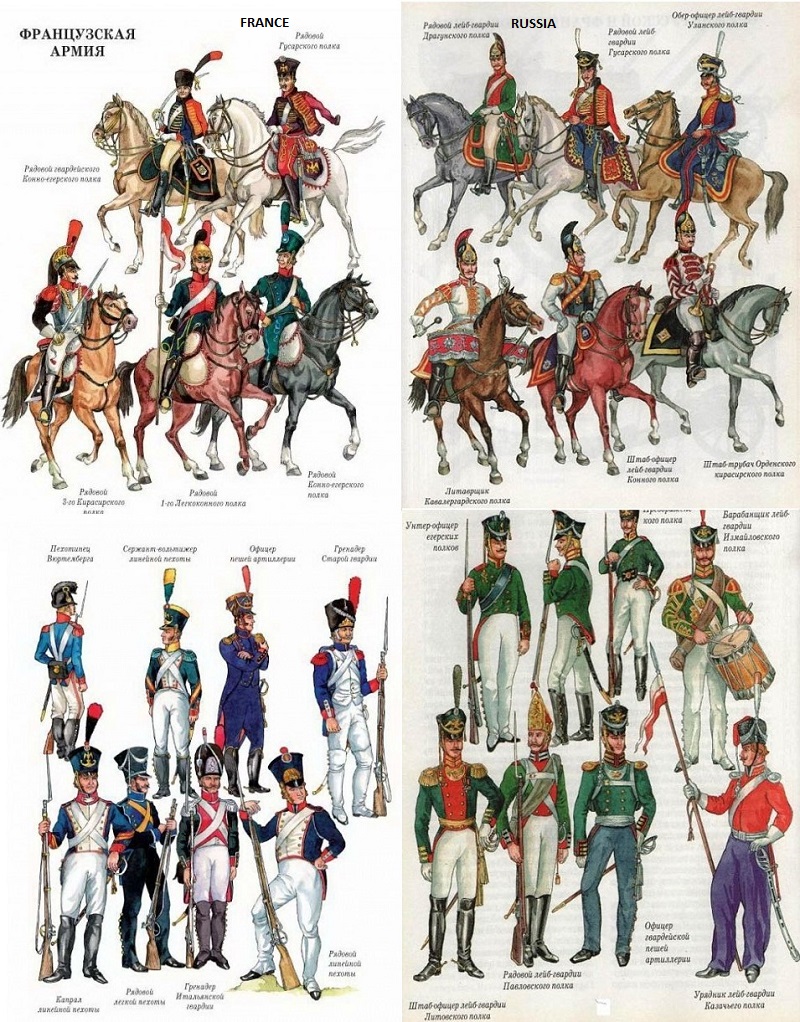 ​
We could wonder how these armies could fight each other in the dark. We could find a plausible explanation as to why their uniforms look like they all came from the same designer. Me personally, I start to think that they were representing the same side.

To be honest, I think the "uniform issue" is the case with every single Independence War of the 19th Century. Google Chilean, or Venezuelan Independence wars and see what you end up with. Below is an example of what you will see. For the image below, take away the flag, and nobody will have a clue what army it is. 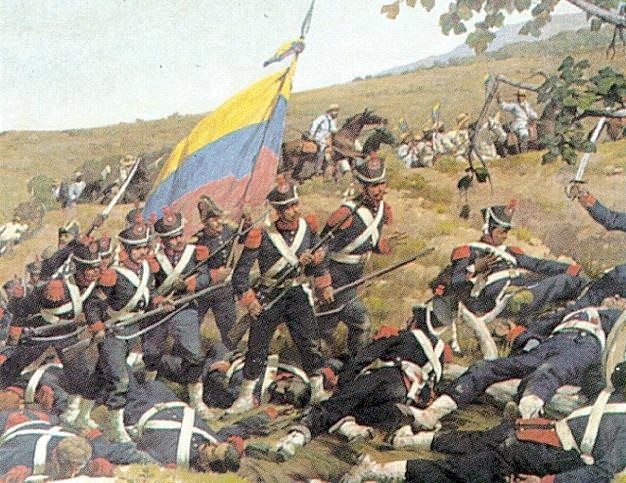 I suspect something similar could be the case with USA vs. Great Britain war of 1812. Meaning USA (or whatever it was called in reality) were allies, and fought Tartarian Government which still existed on the North American continent. The units fighting against the UK/USA alliance, in my opinion, were incorporated into the US Army, just like it was done in the Russia vs. France case.

KD: if you know of any other coincidences, please share.

Back to Washington, DC​
What is the best way to indoctrinate a conquered city? You simply present it like it was already yours. Sure there would be some documentation related difficulties along the way, but writing a thousand papers is much easier then erecting a thousand buildings. From this perspective statements like the one below do not strike as unusual. May be things were not as destroyed as they were advertised to be.
They did it with Moscow, and they did it with Washington, DC. Well, at least it appears that way.

And of course in the process we had to end up with somewhat puzzling images like the composite one below. If it was not for the year being 1814, I would swear the bottom image was a disguised photograph. Well, may be it was a photograph, and we simply have no clue when the photography came to be. It's like the painting was done based on the below "photograph", and not the other way around. 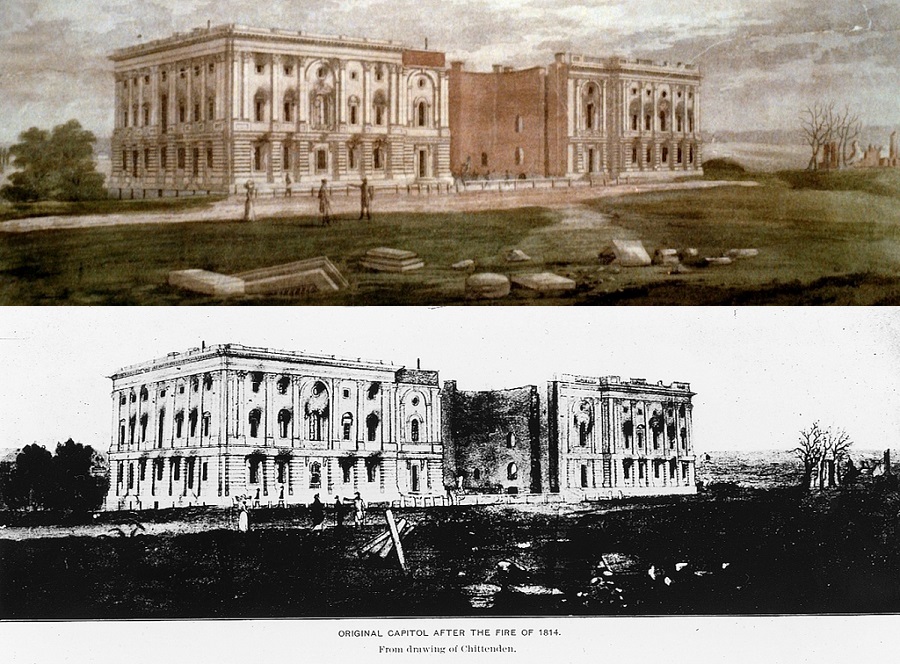 This capitol building above. That is a story of its own. It took them 20 years (1793-1813) to almost finish The Capitol, and another 12 years to fix it after it was burnt by the British in 1814. Even the burning had to have a twist:
For comparison, in 1850s in under five years The Capitol Building was "allegedly" tripled in size: 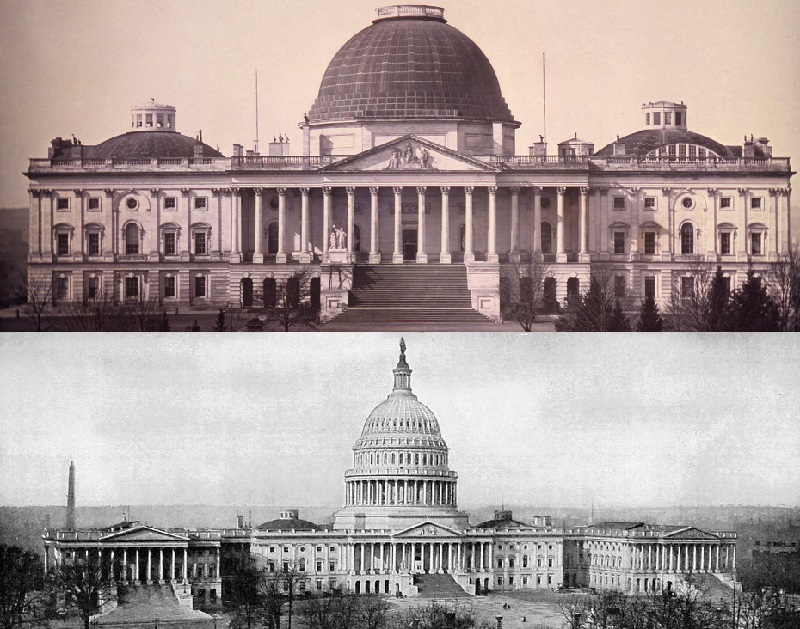 By the way, I was only fortunate enough to locate photographs of the 1861 construction of the dome. If you want a little challenge, see if you can find a photograph with the incomplete wings.

I think this is where I'm gonna end this article. Architectural abnormalities of Washington D.C. should probably be an article of their own. I have tons of questions pertaining to various structures, their designs and images associated with their existence.

This is part II.