Georgia Guidestones: Maintain humanity under 500,000,000 in perpetual balance with nature

Was just wondering what the general opinion on this bizarre monument is. The monument is located in the United States approximately 90 miles east of Atlanta, Georgia. It is made of granite, and was erected in 1980. The main controversy of the monument is one of the inscriptions which states, "Maintain humanity under 500,000,000 in perpetual balance with nature." 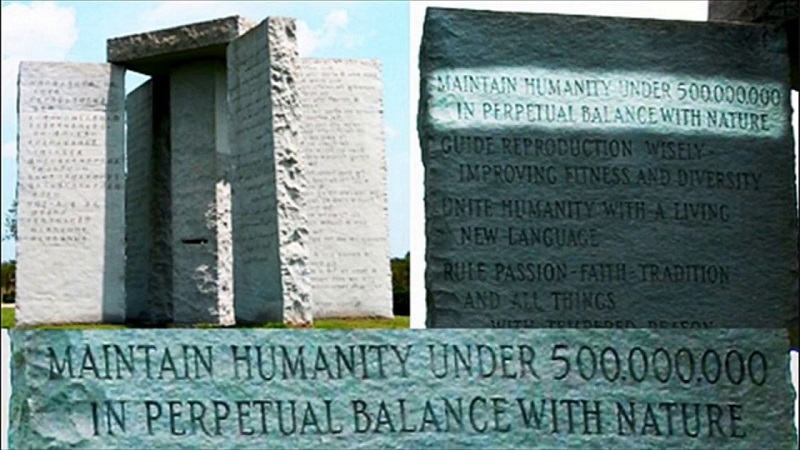 Some Wiki history of this monument, "In June 1979, a man using the pseudonym Robert C. Christian approached the Elberton Granite Finishing Company on behalf of "a small group of loyal Americans", and commissioned the structure. Christian explained that the stones would function as a compass, calendar and clock, and should be capable of withstanding catastrophic events. Joe Fendley of Elberton Granite assumed that Christian was "a nut" and attempted to discourage him by giving a quote several times higher than any project the company had taken, explaining that the guidestones would require additional tools and consultants. Christian accepted the quote. When arranging payment, Christian explained that he represented a group which had been planning the guidestones for 20 years, and which intended to remain anonymous.

Christian delivered a scale model of the guidestones and ten pages of specifications. The five-acre land was apparently purchased by Christian on October 1, 1979, from farm owner Wayne Mullinex. Mullinex and his children were given lifetime cattle grazing rights on the guidestones site. The monument was unveiled on March 22, 1980, before an audience variously described as 100 or 400 people. Christian later transferred ownership of the land and the guidestones to Elbert County."

Inscriptions: A message consisting of a set of ten guidelines or principles is engraved on the Georgia Guidestones in eight different languages, one language on each face of the four large upright stones. Moving clockwise around the structure from due north, these languages are: English, Spanish, Swahili, Sanskrit, Hebrew, Arabic, Chinese, and Russian. 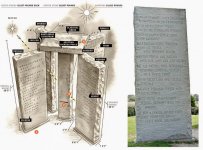 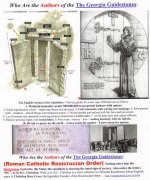 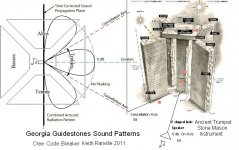 ​
While nobody knows for sure, it is rumored that the stones were commissioned by the Rosicrucians. Though there are plenty of theories out there.

KD: Any opinions on what the meaning of the stones could be? Any theories you've heard?
Click to expand...

The first one down was rumored to be the one with inscriptions in Chinese and Russian. Strange that the rest was taken down so quickly. I believe this was an evil monument and that one way or another it is a sign from God that it has been taken down. I think the "scarcity of resources" is a lie just like the "given history". I think the research on this site proves that tech has been hidden from us, all adds up to the big lie that there are too many people in this realm.

And today the obelisk in Vigan City was hit. Vigan City Obelisk Struck By Lightning 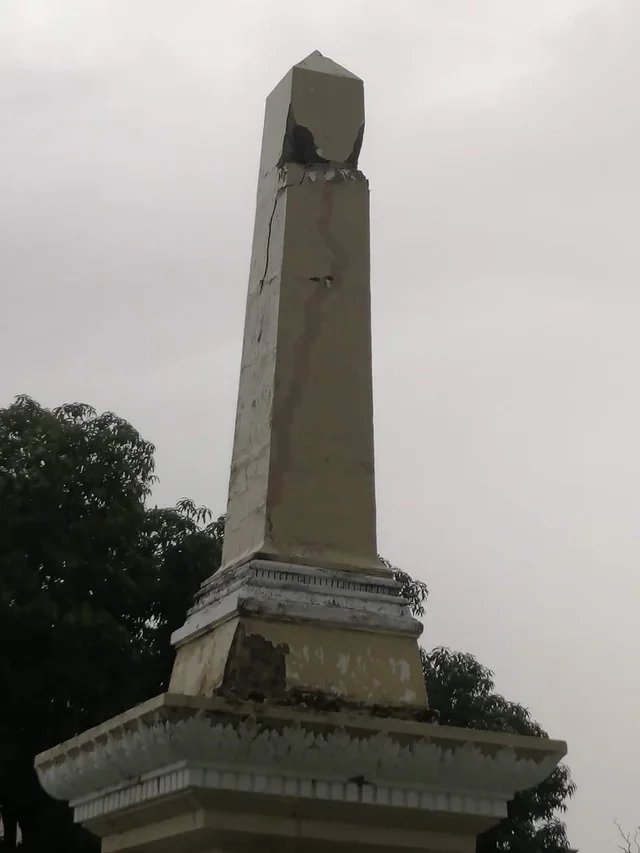 Yes, I think the public sentiment has been unveiled regarding these stones! I agree with their demolition.

the story is fascinating though. RC Christian is all but certainly a hat tip to the rosy cross/Rosicrucian order, but is it genuine or subterfuge? Elements of the commandments ring true to my understanding of the Rosicrucian order, but the one world language/court and population control don’t fit the rhyme scheme.

to grossly generalize, I’ve always considered Freemasons the esoteric dark side and Rosicrucians the light. The commandments strike me as very Masonic; evil cloaked in a shroud of good.

also, I don’t know how you could anonymously purchase land, being titled/deeded and such. It’s not a tracfone from 711 that you can buy with cash and keep secret. I feel that if the land purchase was truly done anonymously, then it was done with the help of officials.

lastly, RC Christian represented a group of “loyal Americans.” Loyal to what or whom?
Last edited: Jul 9, 2022

All it requires is any independent thinking individual who can use some discernment, twistory, some rudimentary mathematics knowledge & gematria.

The event was staged. At least two different camera angles were used. The facts presented don’t match the videos released.

Simply another scripted story line to follow as they craft our reality vis perceptions they generate in the Demiurge Multiverse.

They have woken more people up for sure. They do live among us as a Trojan Horse virus of perhaps the most extremist’s ever known to exist on this planet’s plane & realm. Responsible for countless lies, crimes, deceptions against humanity at large. World’s is largely a rigged stage of insiders who know how it works.

Imagine when the masses actually process the cathartic epiphany & realize the EL-ite’s have been sacrificing humans & harvesting humans for thousands of years.

Cremation of Care ritual is very real just a bit too deep for most surface readers & observers.

Can’t make people think or tell them what to see. They have to see it, feel it, taste it, discover it for themselves.

Mound/Pyramid builders did it for for specific reasons as it wasn’t on a whim but a deeply held be-LIE-f system among Aristocrats/Insiders/Cults/Religions etc.

This current unveiling of the Plato’s Cave Demiurge & apocalypse alternative meaning is the largest & most revealing ever since the knowledge & information travels faster as well.
Last edited: Jul 11, 2022
You must log in or register to reply here.
Similar articles