At this rate I will never get down to what I really want to write about. But some things simply stop you dead in your tracks. Well, at least this is what this hygiene Expo did to my original plans. I just find events of this nature highly ridiculous when viewed in light of the time frame they were held at. At the same time examples like this reinforce my belief that we have very little to no understanding about that culture and the infrastructure they possessed. 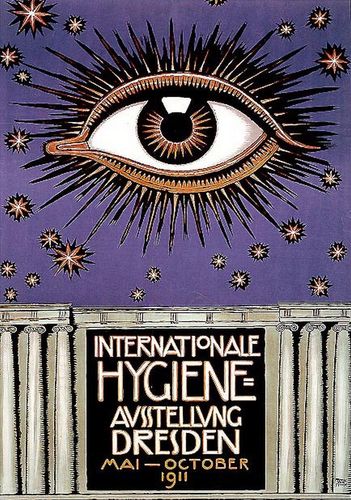 1911 Hygiene Exhibition Stats
KD: This is amazing how many various "Expositions" there were out there. 100 buildings here, 100 buildings there, and the old world is incorporated into the new one. They sure did capitalize on these "hygiene" Expos, for other International Exhibitions of Hygiene were held in: 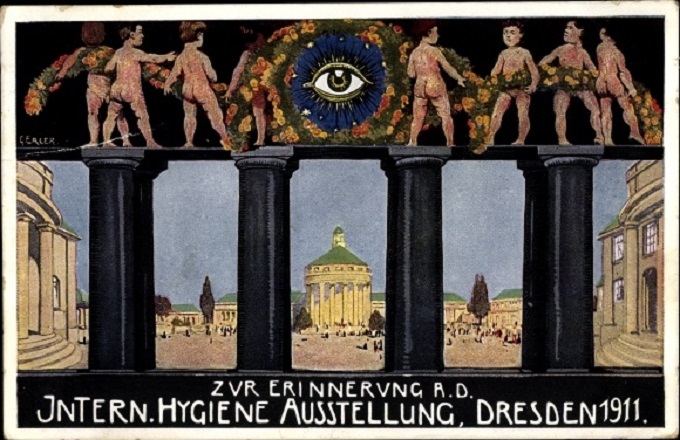 The "Internationale Hygiene Ausstellung, Dresden, 1911," has by this time closed its doors and passed into history. It was one of those rare and remarkable creations of the human mind that will absolutely refuse to die. The exposition itself was only the opening scene in a performance which had its beginning in the month of May and ended with a climax in the month of October, when the curtain dropped. Its real work, though impressive and monumental from the start, has only just begun. Little folks and little minds may criticize the little imperfections about it from a distance. Those who are in the habit of looking for principles in things with broad and generous minds, having taken the trouble to visit and study the exposition more conscientiously, were overwhelmed with its grandeur, its beauty and the nobility of the motives underlying the undertaking. Fortunate indeed are those who were allowed to witness the great event, still more fortunate those who may count themselves active participants in it. For, nothing, no event in history, could be cited as showing the working of the human mind in the Germanic race of man, as illustrating it in all its splendid attributes and as placing it in a clearer light, to better advantage, than did this magnificent hygienic exposition. No other human endeavor could be cited as showing the ultimate motive power in the accumulation of personal wealth to be, in reality, that of aquiring the ability and power of giving to others and of, thus, contributing to the happiness of others, than did this exposition. As an organized endeavor to prevent sickness and prolong human life, to project the living laws of health and happiness into the minds, the hearts and the very homes of people, it certainly surpassed anything of the kind in the whole history of hygiene and sanitation.


Ground Plan of the Exposition 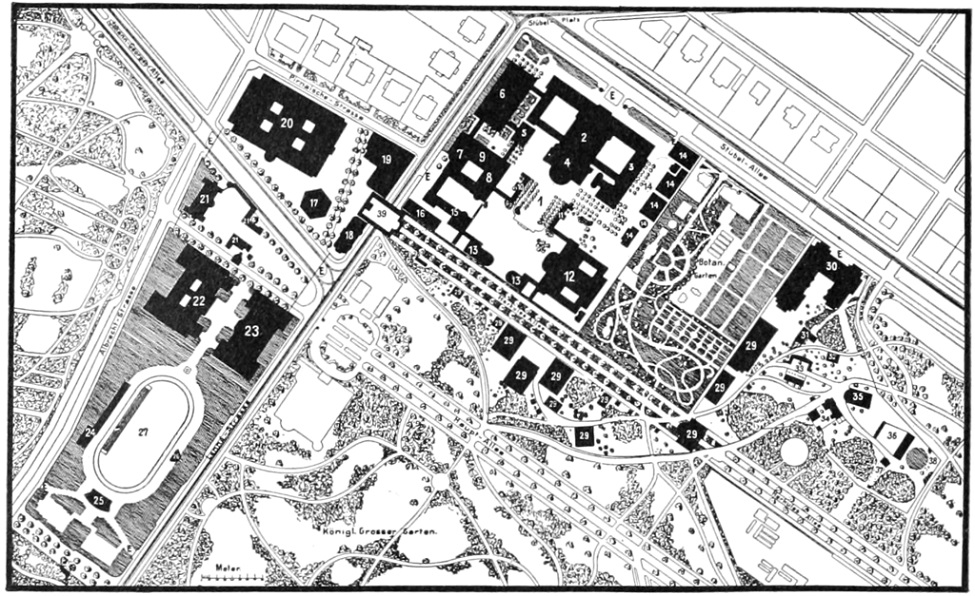 Zoomable with Details
​
The exposition grounds cover in all an area of 320,000 square meters, of which 70,000 square meters are occupied by buildings, 72 in all, large and small. There was not a single visitor who did not regret the shortness of the existence of this great exposition; who did not feel his interest in it increasing daily, while in attendance; who would not welcome an opportunity of returning to it for more instruction and inspiration; who was not moved to wish that every living man and woman might receive the benefits this exposition was intended to convey and to disseminate. 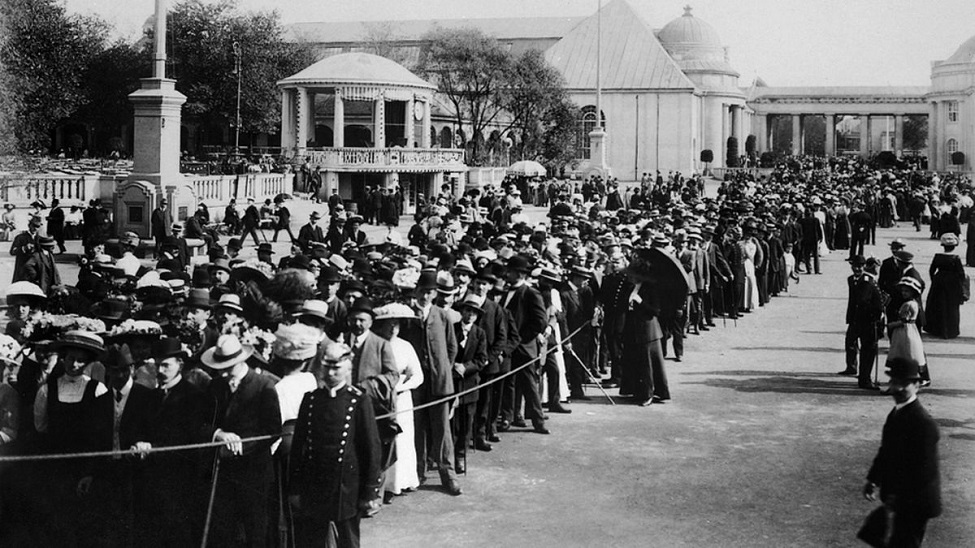 Source
​
The main entrance to the grounds consists of three rows of large and imposing columns, covered in above. Passing through these columns, and to the right of the main entrance we find the administration building which houses the various offices of the director, assistant directors, the post offices, the fire department and the sanitary and red cross companies, all excellently and most efficiently organized; to the left stands a very large structure containing the assembly hall, intended for the meetings for the large number of congresses that met in Dresden during the summer, the various exposition halls for school hygiene and the care of children, exhibition rooms for dental hygiene, tropical hygiene and chemical industries, for infectious and venereal diseases.


Main Entrance from within 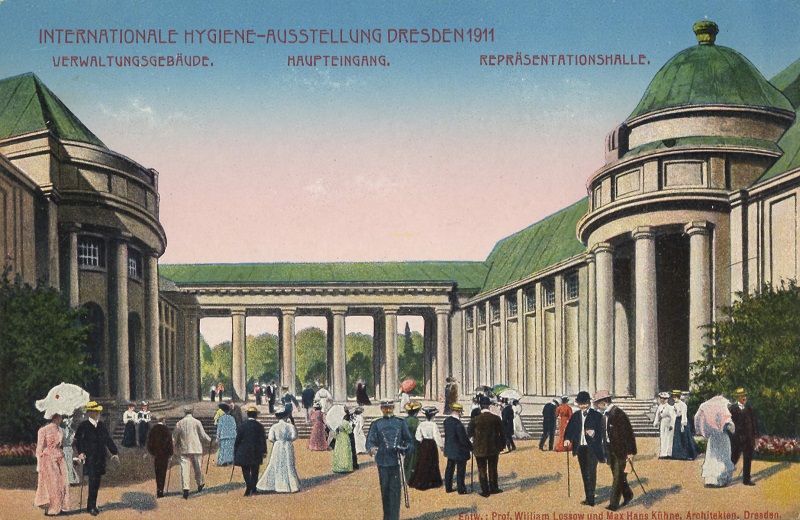 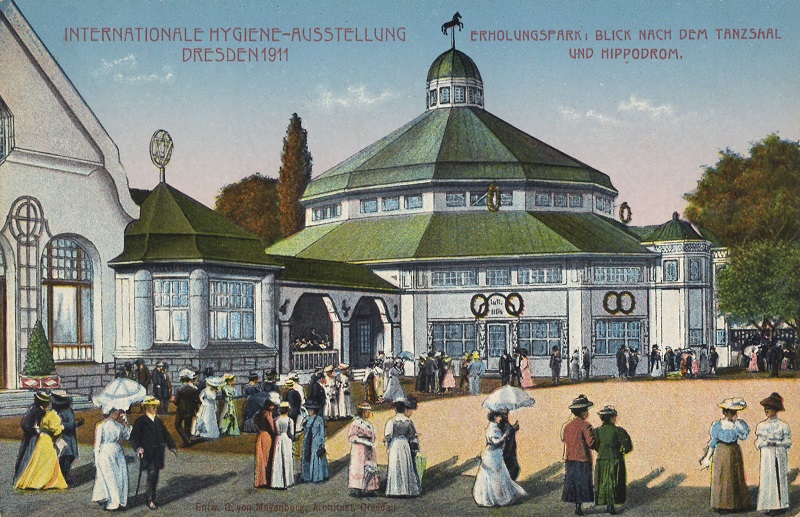 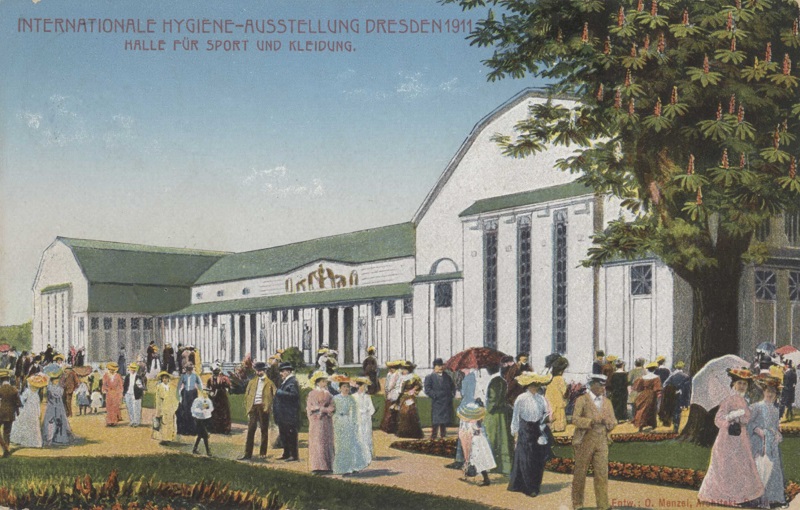 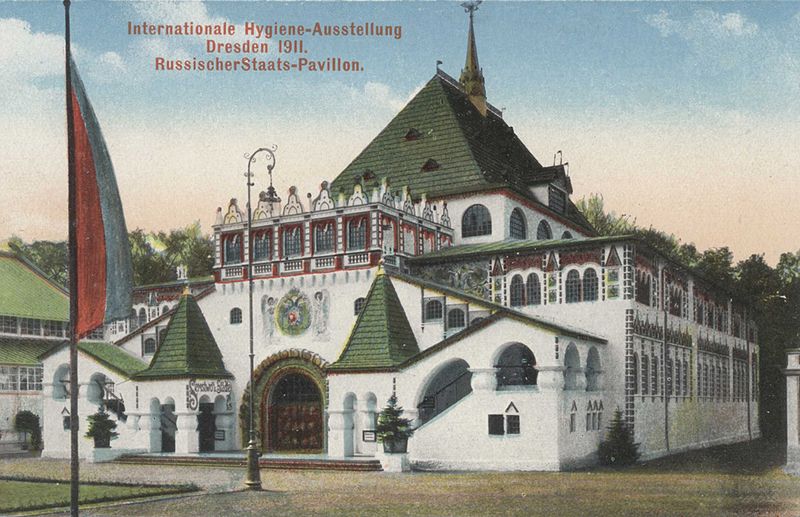 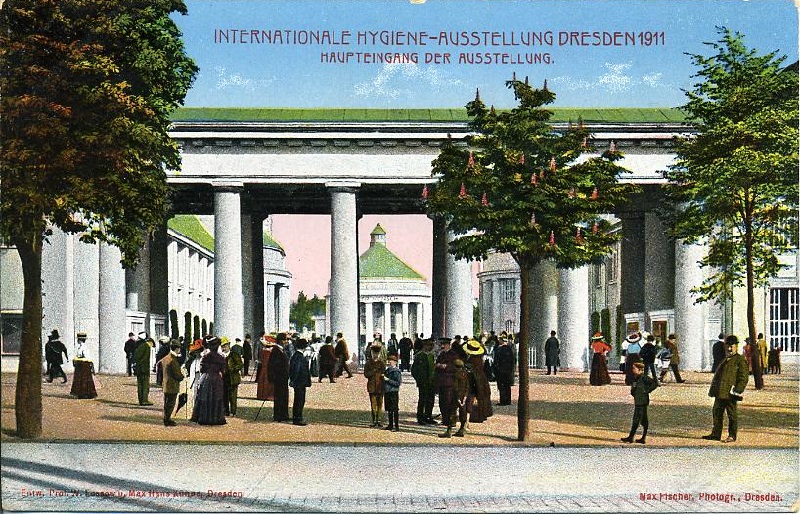 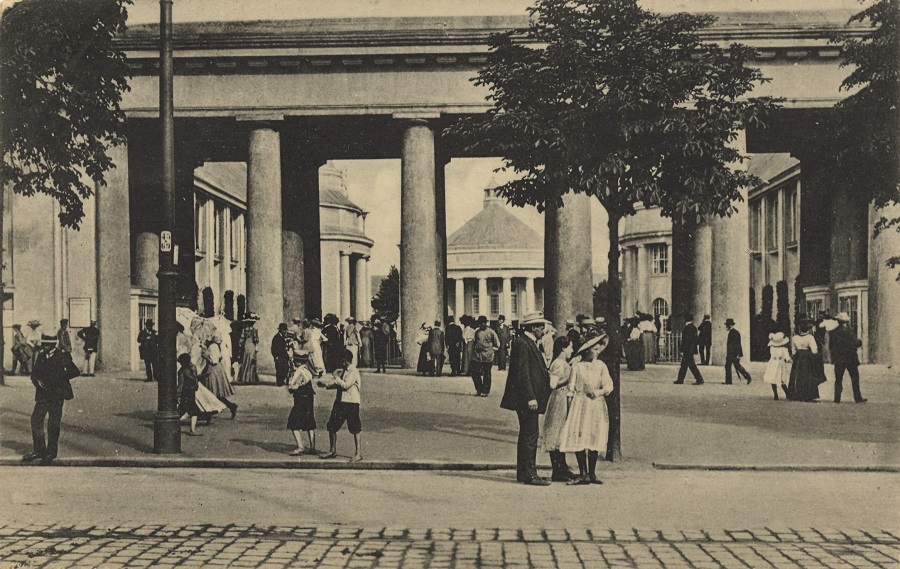 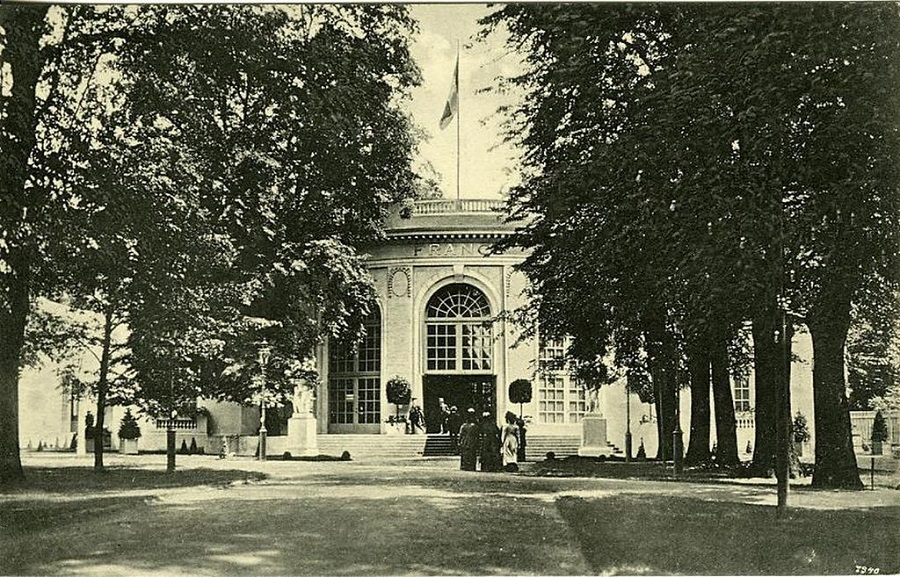 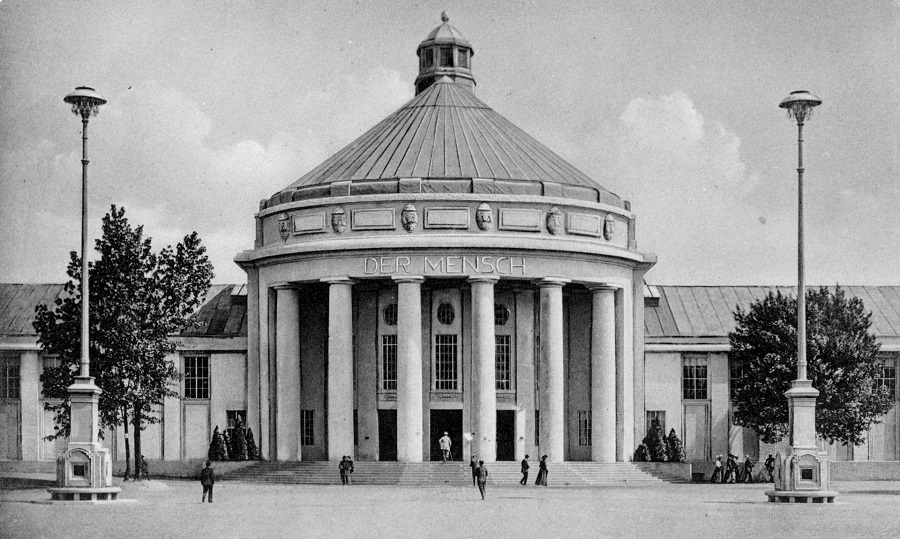 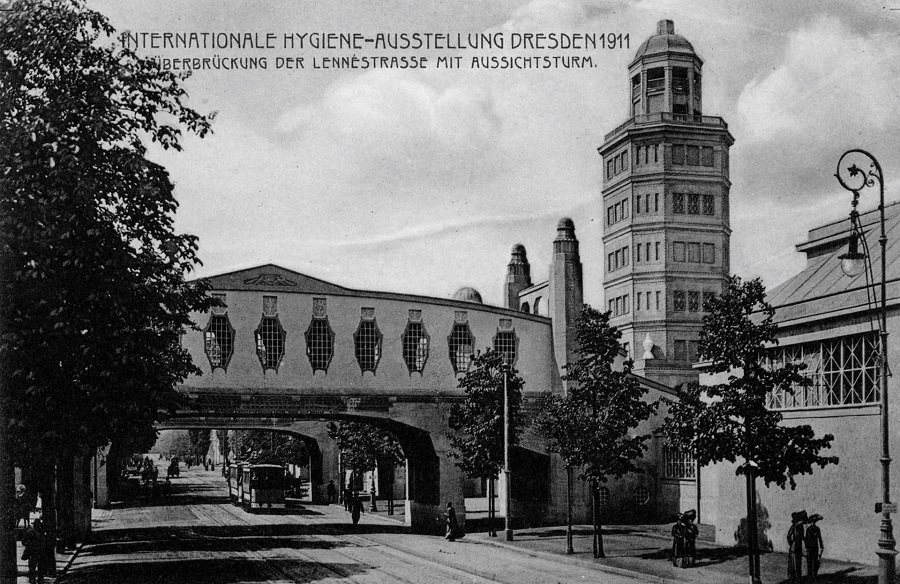 Source
​
What do you think about the people in the above photographs? Do they look drawn in?

KD: Anyways, this is not an expo I personally want to dive into. Influenced by the theme of this particular expo, I'm publishing it to emphasize the abundance of such events between 1850 and 1915. There are so many we do not know about. I am not saying that the info is hidden, but the sheer number of these expositions would justify (imho) for a new historical discipline:
Links and Sources:
P.S. Who would have thought that personal hygiene could be that exciting?
Click to expand...