I think the story of this monorail is somewhat weird. They say it existed for 5 years, but it only had one operational car... why only one? 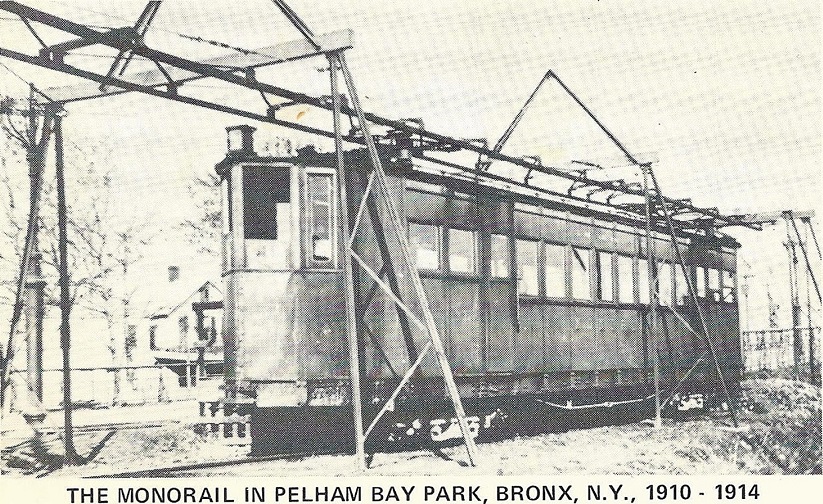 The Pelham Park and City Island Railroad was a short street railway in the Bronx, NYC, which connected City Island with the Bartow station of the Harlem River and Port Chester Railroad in the mainland Bronx.
I find it interesting that these two technologies were operating side by side. 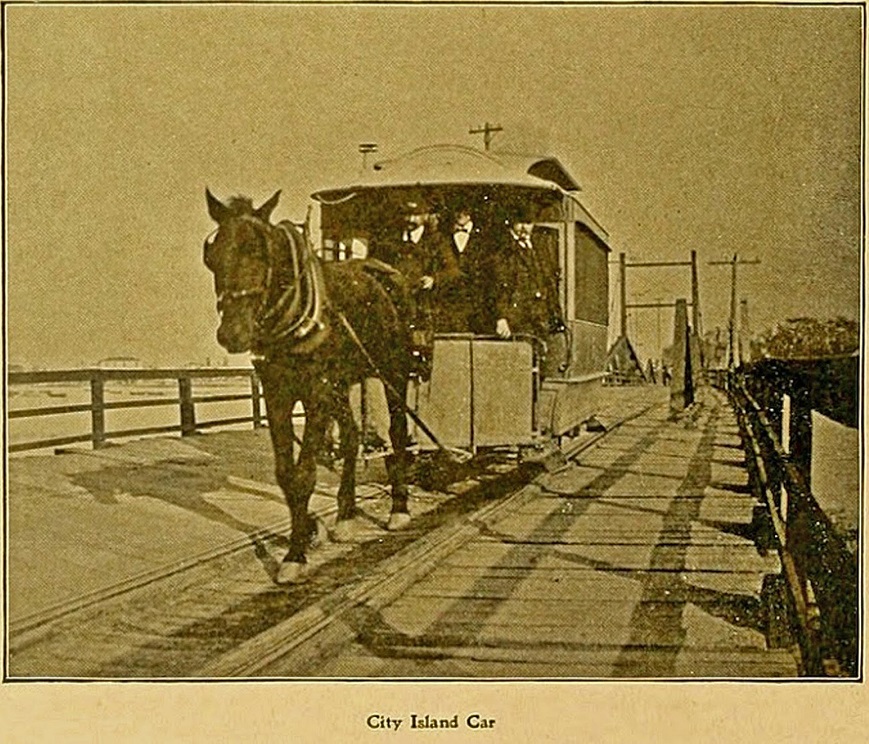 The monorail, between the Bartow station and Marshall's Corner, opened for regular service on July 16, 1910, although the cars unofficially began carrying passengers two days earlier. The monorail car toppled over on its maiden voyage, and operation was immediately suspended. 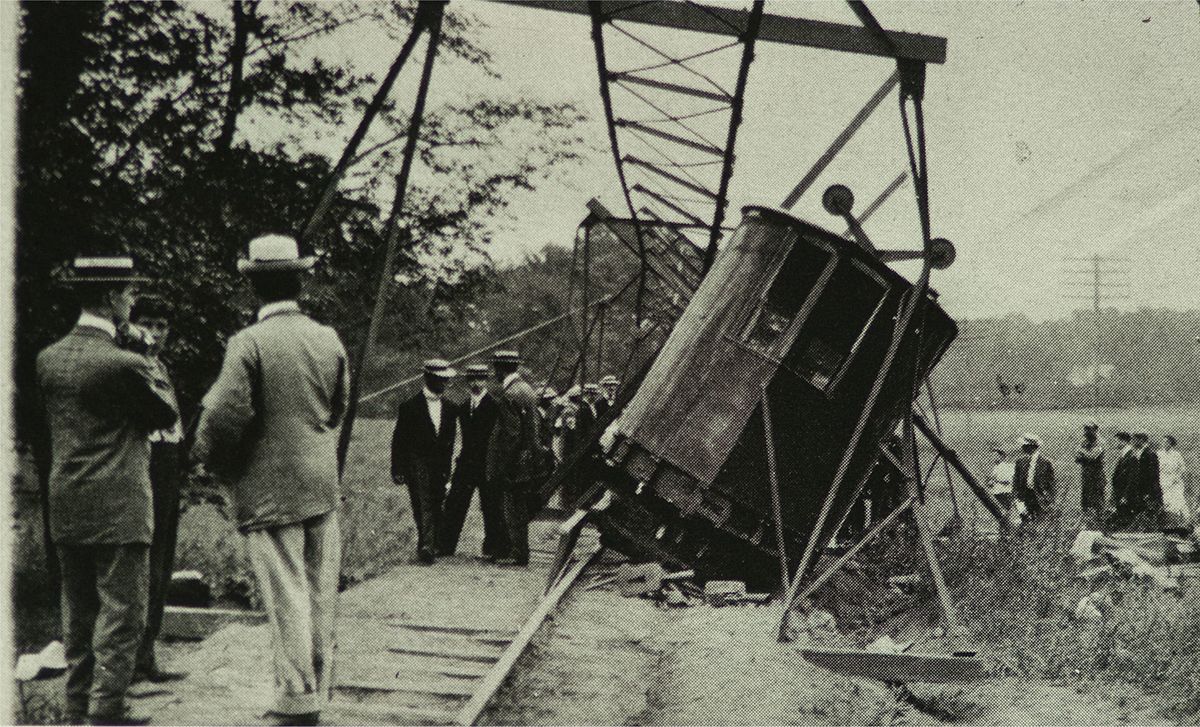 Service was ultimately restored on November 14, 1910. 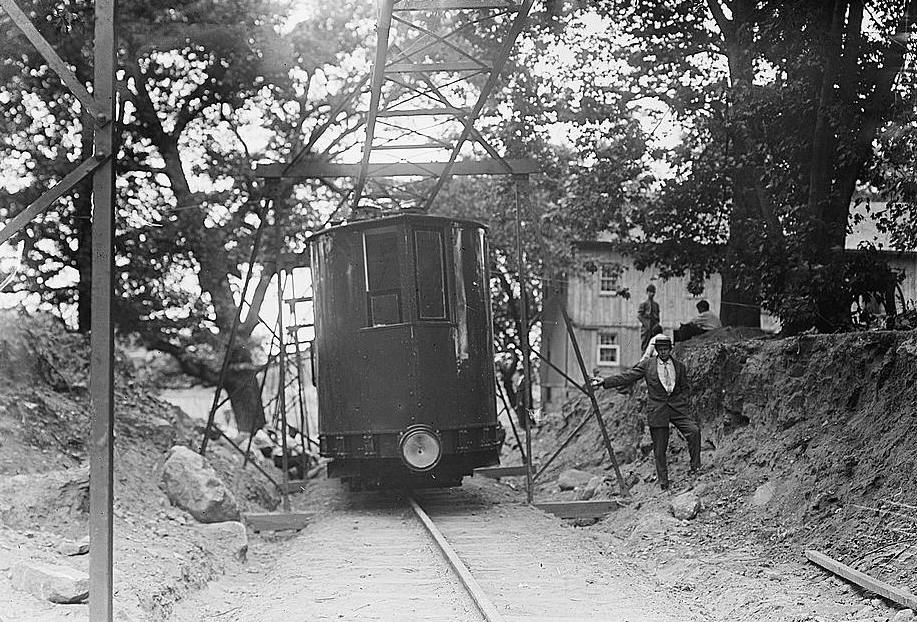 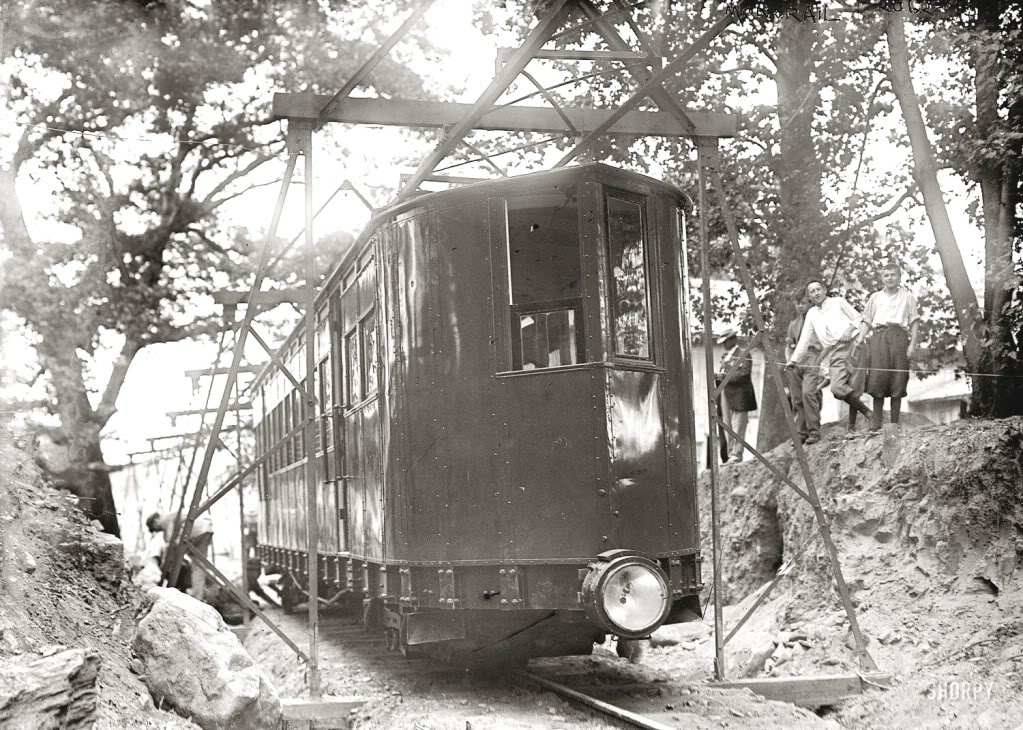 The monorail was not a success and the IRT forced the companies into bankruptcy on December 4, 1911. The monorail on the line's western end and the narrow gauge horsecar line on the eastern end continued to operate.

And this here is what the interior view of our "Flying Lady" was supposed to look like. 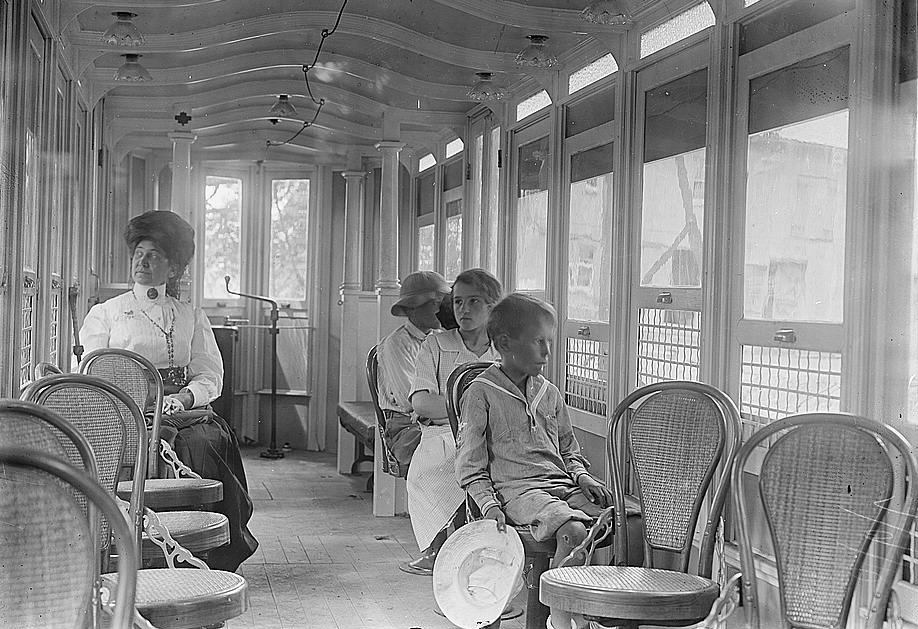 KD: Somehow this story does not make sense to me. We only have one car running on this entire monorail system. After approximately one year, a chunk of the monorail was shut down due to not being successful, while the monorail on the line's western end continued to operate for four more years until 1914.

That car is absolutely hideous. Flying Landfill is more like it! Those chairs in the interior look pretty odd and uncomfortable too (so does the old man boy near the front.) But they put some crappy columns in, so I guess it's classy? The car also looks rougher in the supposed derailment photos than the subsequent ones. Maybe someone told them to shine it up, you're scaring away customers?

Overall, I don't have any problem believing that this trash can, which crashed shortly after being opened, wasn't popular and in panic, they reduced the route available to try and increase the frequency of service. Sure, they could have built more cars, but maybe no one wanted to invest in that, given what had already transpired.

Still though, maybe I'm missing something here. From your second source:

For some mysterious legal reason the Interborough Rapid Transit Co. bought the two tiny horse car lines in 1903 so as to use their charters as the basis of its vast subway-elevated system.
Click to expand...

Mysterious legal reason? Seems like Interborough was buying up everything at the time though:

Founded on May 6, 1902, by August Belmont, Jr., the IRT's mission was to operate New York City's initial underground rapid transit system after Belmont's and John B. McDonald's Rapid Transit Construction Company was awarded the rights to build the railway line in 1900, outbidding Andrew Onderdonk. On April 1, 1903, over a year before its first subway line opened, the IRT acquired the pre-existing elevated Manhattan Railway by lease, gaining a monopoly on rapid transit in Manhattan...
Click to expand...

KorbenDallas said:
The monorail, between the Bartow station and Marshall's Corner, opened for regular service on July 16, 1910, although the cars unofficially began carrying passengers two days earlier.
Click to expand...

Unofficially. But we know they did!

This sort of stuff always reminds me of stores that have their Grand Opening celebration months after the business actually opened. If similar practices with "constructed", "founded", etc dates were conducted in the past, then who knows what any given date is referring to.

From the sheer amount of different technological innovations we see during this time frame, at the very least (that is if were to play on the narrative writers’ side), we should expect a seriously developed educational system supported by many other strongly developed industries.

Instead we see single geniuses with questionable biographies, and the only strongly developed industry appears to be agriculture.

The way i see it this is simply another case of misunderstood or poorly implemented recovered tartarian tech. By now we know that their civilization had railways and zeppelins all over the planet (you can still see many ruined railroads and rail infrastructure on modern aerial maps). However tartarians used a form of advanced wireless energy (electricity / radio) that powered their world. All buildings had some type of atmospheric generator built in the rooftops, devices and vehicles had a small spherical receiver somewhere on the rooftop/top of object. Now, during their time all these trains and trams ran just fine on wireless electricity, but during our civilization the elites demolished many building rooftops to remove the atmospheric generators so the vehicles and devices fell silent.
This is why they were using horse drawn trams (absolutely ridiculous), because the electric infrastructure was already down in the 19th century (our time) and they really had no other way of mobilizing that tram car.
The reason why the elites destroyed the free wireless electricity infrastructure is because they were planning on indroducing cabled electricity that can be controlled, counted and turned into an addictive commodity to control the population with.
Just imagine how simple life would be and how much humanity would advance if we had access to free wireless electricity all the time everywhere.

I think that the reason they only used one monorail car is because it was probably a prototype from tartarian time and one is all they found. I know it doesn't look like much but it was probably still too complex to be reproduced with the tech they had available in the early 20th century. If you looks carefully in the pics you will notice it has rimmed steel plates bound by rounded rivets. Definitely tartarian steel tech. It was probably not even outfitted for passengers during their time if it was a prototype.
Another piece of recycled tartarian tech was the Hindenburg and other zeppelins. KD you should probably do an article on the zeppelins. That was a piece of old world tech that the elites wanted to phase out so they made it go boom in a public spectacle of failure in order to remove the idea of zeppelins. What a shit show that was.

I have added an old photo of a 2 story tram that was improvised with "horse tech". Does that look like it was meant to be operated with horses? 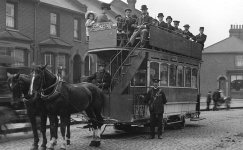