1855: Vortex Cannons during the Bombardment of Sveaborg?

Air Vortex Cannon​
An air vortex cannon is a device that releases doughnut-shaped air vortices similar to smoke rings but larger, stronger and invisible. The vortices are able to ruffle hair, disturb papers or blow out candles after travelling several meters. A vortex ring, also called a toroidal vortex, is a torus-shaped vortex in a fluid or gas; that is, a region where the fluid mostly spins around an imaginary axis line that forms a closed loop. The dominant flow in a vortex ring is said to be toroidal, more precisely poloidal.

Spark photography image of a vortex ring in flight. 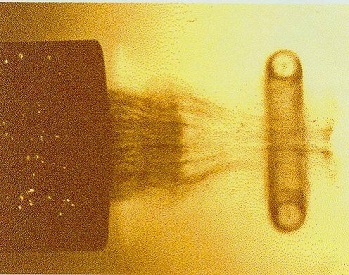 Vortex rings are plentiful in turbulent flows of liquids and gases, but are rarely noticed unless the motion of the fluid is revealed by suspended particles - as in the smoke rings which are often produced intentionally or accidentally by smokers.

Flow around an idealized vortex ring.

In this video Nate shows us how to build our very own air vortex cannon, which can blast smoke rings up to 30 feet away! 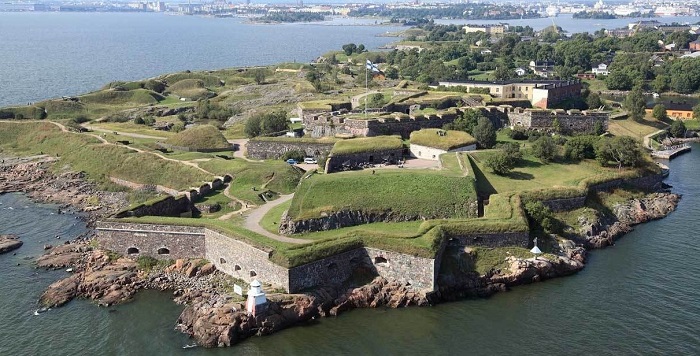 Fortress of Viapori​
British and French naval forces consisting of 77 ships arrayed for the long-expected battle on 6 August 1855. They formed into a battle line more than 3 km off shore beyond the range of the defenders' obsolete artillery.


Toroidal Vortexes?​
I did not verify any legitimacy to the below images. They appear to belong to the time period this battle of Sveaborg took place. Whether these images were overlooked by the PTB, or were left uncensored intentionally, I do not know. We have what we have. This could be as simple as some bizarre artists' vision of the events, or as complicated as an unknown weapon system. Unknown to us that is... Please inspect the images, and come to your own conclusion. 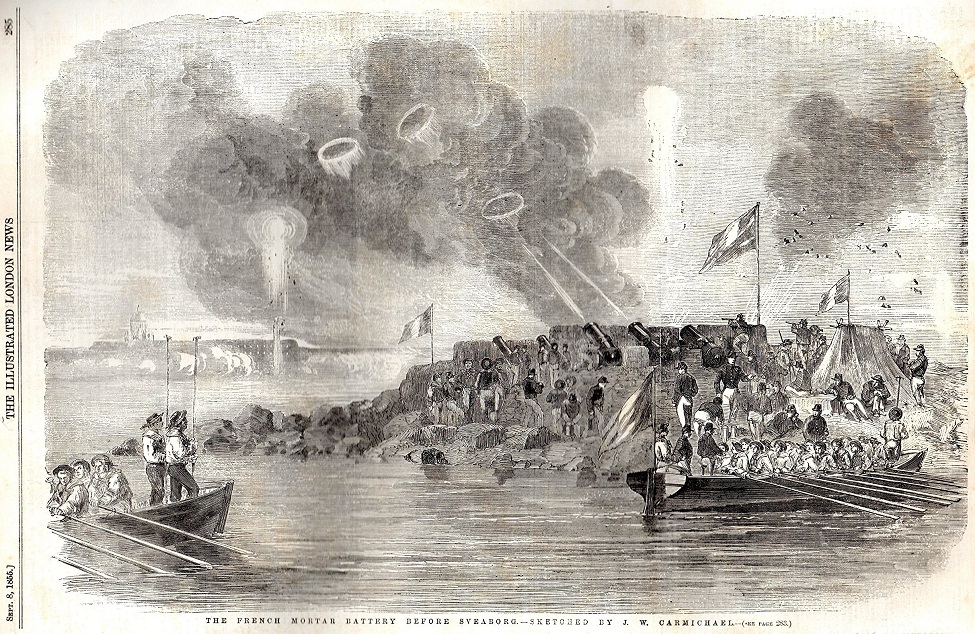 Source
​
2. The Bombardment of Sveaborg: painting by J. W Carmichael - now at the National Maritime Museum 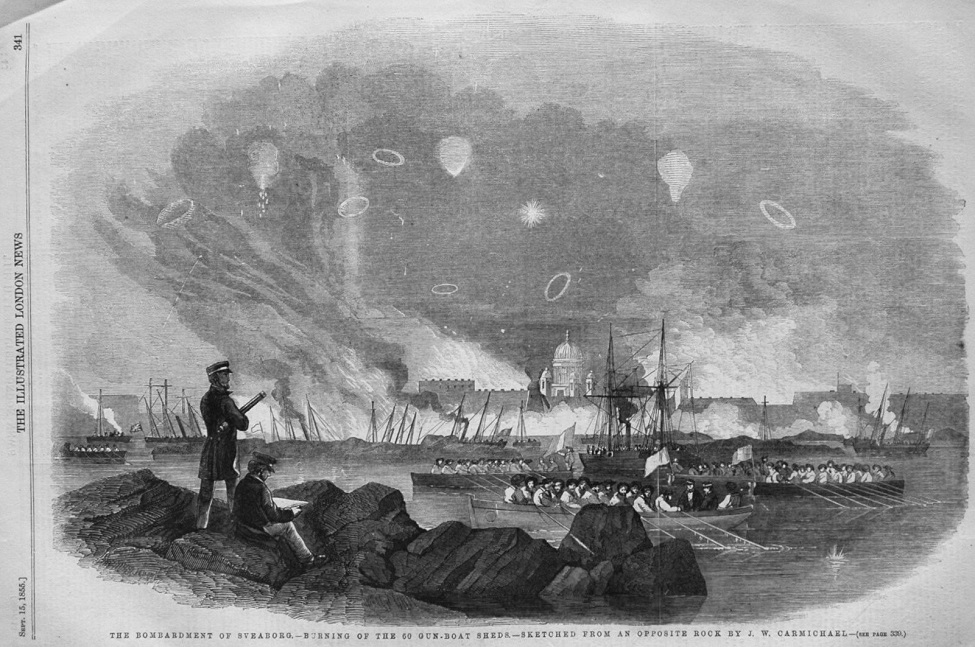 Source
​
4. Bombardment of Sweaborg: engraved by J. C. Armytage and published in this book set. 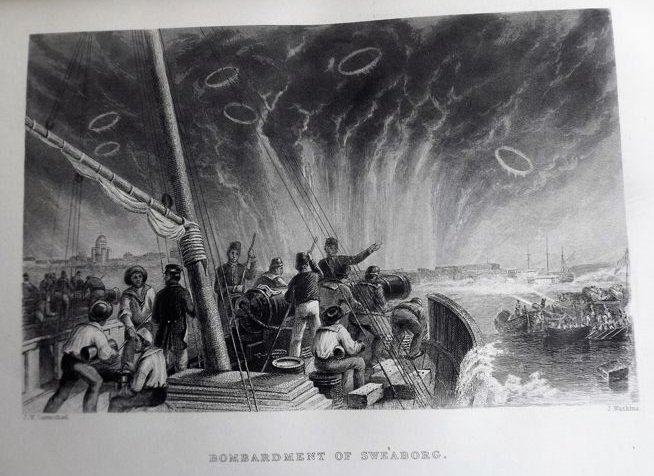 Source
​
5. The Bombardment of Sveaborg: engraving by an unknown artists. 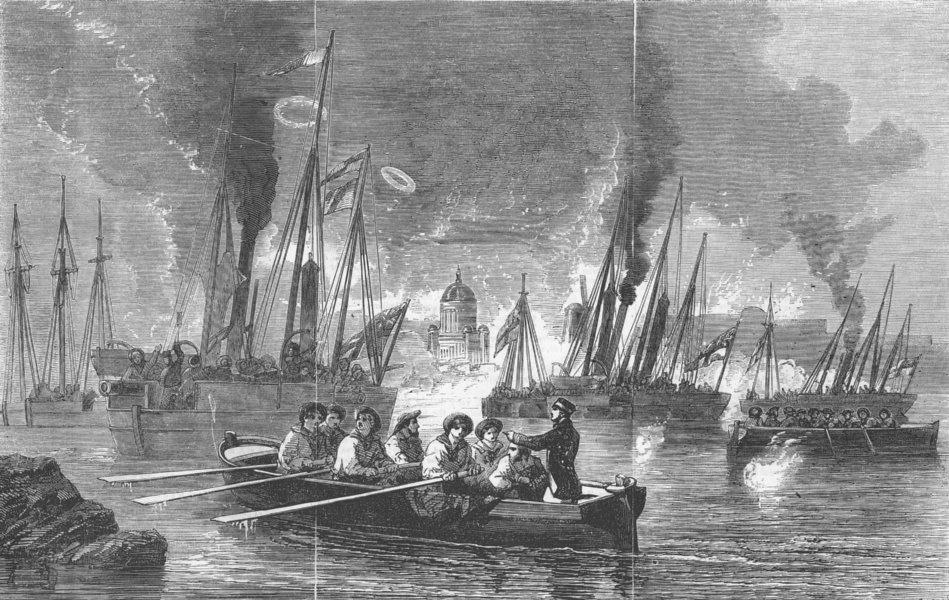 Source
​
6. The Bombardment of Sveaborg: engraving by an unknown artists. 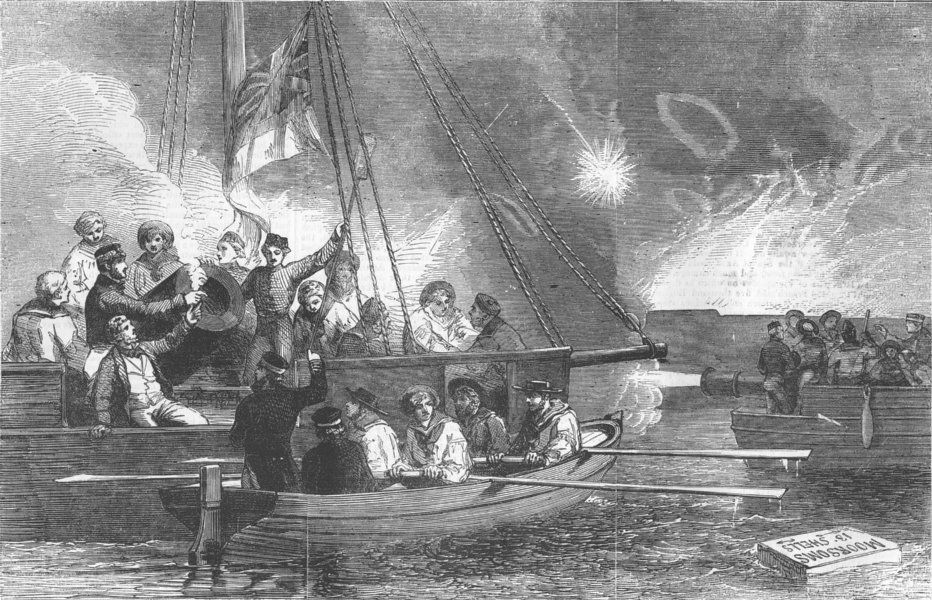 Source​
The above image has a box floating in the water. I turned it upside down, and you can see it below. It's presence in the image could be an important pointer from the author.

The below info was written in the early 1900s. Some Galvanic or Magnetic Gun is being mentioned. Looks like in 1845 it was only capable of 40-50 feet, so who knows what they were capable of 10 years later in 1855.

KD:We have what we have, and it is what it is. Only we do not appear to know what it is. They clearly have a direction of movement, and we can see the point of origin. At the same time, these vortexes are supposed to be invisible. Yet, the artist included these toroids in his drawing. This could suggest that the author knew what he was drawing. The author in this case was J. W Carmichael. 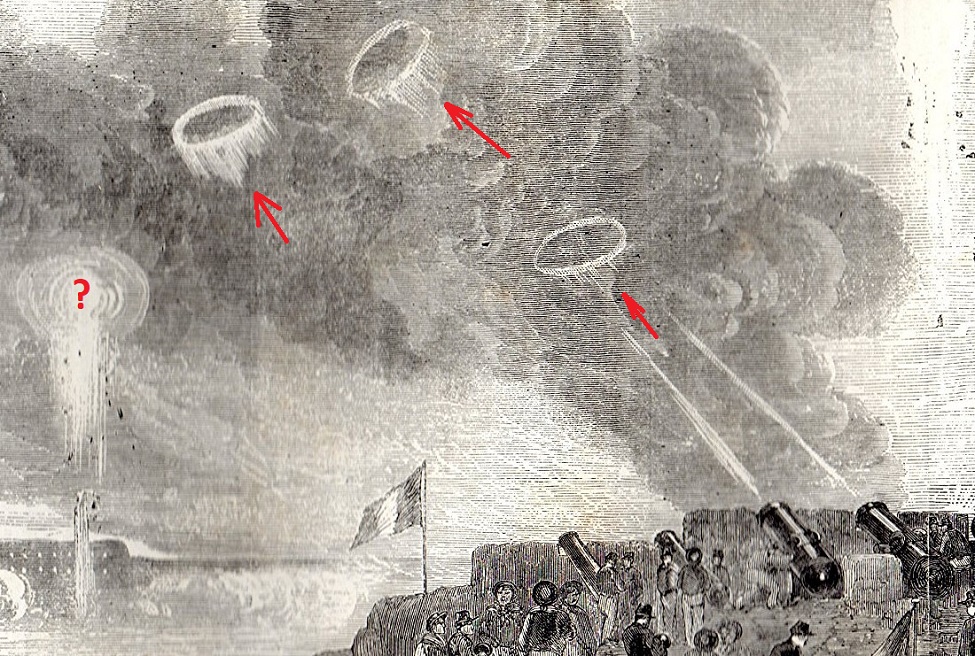 Anyways, would love to hear your thoughts on the above.
Click to expand...

Same as today, but with no defense. They can burn all withouth "molestation".

kulapono said:
what projectiles were they using?
Click to expand...

Maybe proyectiles were not so important, but to form corona style flux in the barrel. Remember they didnt fix completely.

Androseo said:
Maybe proyectiles were not so important, but to form corona style flux in the barrel. Remember they didnt fix completely.
Click to expand...

I was wondering why the paintings show like they were aiming for something in the air. Without a projectile doesn't the air just 'disintegrate' as it ascends past effective range? Were they firing at the attacking ships or something else? Thank you for your answer.

Whenever I see these pics I think they may have been trying to induce the same kind of conditions that happened when Napoleon rolled into Moscow, an "out there" thought but it is what comes up for me.

I am no expert on military weaponry (the whole topic sort of sickens me, to be honest, and the glorification of it in our culture), but the one thing that seems obvious is that if you were going to conceal anything from the public and therefore the pages of history, it would be the full extent of the weapons in your arsenal. There's obviously countless examples of this in recent history (and plenty of speculation of more).

The "19th century" is not short on any number of unique, seemingly "advanced" technologies, most of them presented as one-offs, if you find record of them at all. It is not hard to imagine, to the point of it being likely, that if we see random people constructing robots, that militaries of the world, with greater resources and infrastructure, would be inventing (or re-inventing?) all sorts of different ways to kill people.
S

" What were they firing at?"
Up in the sky
I dare not say.

kulapono said:
I was wondering why the paintings show like they were aiming for something in the air
Click to expand...

SuzyAllena said:
What were they firing at?
Click to expand...

I think since we just have static depictions, it doesn't mean that these indicate they were firing at (things in) the sky. It could just be showing the path that the projectiles (physical or otherwise) are taking before hitting a ground/water based target. Or, like the article on Moorsom's shells says, we are seeing the shells explode and maybe we don't understand what they were filled with exactly. Maybe they are exploding in the sky to disrupt rockets being launched, like a modern day anti-ballistic missile.
You must log in or register to reply here.
Similar articles