Was the Fourth crusade the First one? Was Babylon located in Cairo?

"The Crusades were a series of religious wars sanctioned by the Latin Church in the medieval period. The most commonly known Crusades are the campaigns in the Eastern Mediterranean aimed at recovering the Holy Land from Muslim rule, but the term "Crusades" is also applied to other church-sanctioned campaigns. These were fought for a variety of reasons including the suppression of paganism and heresy, the resolution of conflict among rival Roman Catholic groups, or for political and territorial advantage. At the time of the early Crusades the word did not exist, only becoming the leading descriptive term around 1760." - Wikipedia

I will primarily focus on the Fourth one, which lasted from 1202 to 1204. Inspecting some of the publications pertaining to this Crusade, I will attempt to present some evidence, that the alleged three Crusades pre-dating the Fourth one could have been faked.

Official Version
source + wiki​
I have a blasphemous idea of Jesus being born in the 12th Century; in its second half to be exact ( J. life span: 33 years between 1150 and 1190). In later threads I will present the reasons I have to think that way. Essentially, Fomenko and Nosovsky are two amazing individuals to spot all the inconsistencies. More importantly, they demonstrated a line of thinking capable of exposing these inconsistencies.

Based on the yet unpublished opinion of Jesus dying closer to the end of the 12th Century, I was somewhat suspicions of any possibility of the first two, and may be even three Crusades. The dates were not really possible. So I decided to look into the Third and Fourth ones, and the Fourth one sure was interesting. To say the least, it does put a serious dent into the official sequence of the Crusades. Well, for me it does. 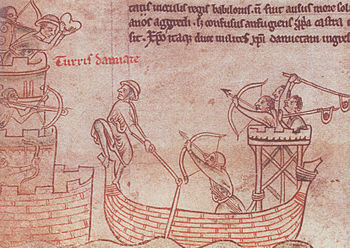 KD Note: The Crusade known as the Kings' Crusade (Richard the Lionheart, Philip II of France, Frederick Barbarossa, Leopold V, Duke of Austria) was allegedly chronicled by some "anonymous" authors 30 years after the Third Crusade supposedly took place. Nobody bothered to officially record the event?

Result of the 3rd Crusade - Treaty of Jaffa

The Fourth Crusade
aka the Conquest of Constantinople by French and Venetians​
The Fourth Crusade (1202–1204) was a Latin Christian armed expedition called by Pope Innocent III. The stated intent of the expedition was to recapture the Muslim-controlled city of Jerusalem, by first conquering the powerful Egyptian Ayyubid Sultanate, the strongest Muslim nation of the time. However, a sequence of economic and political events culminated in the Crusader army sacking the city of Constantinople, the capital of the Greek Christian-controlled Byzantine Empire.

In August, following clashes outside Constantinople, Alexios was crowned co-Emperor. However, in January 1204, he was deposed by a popular uprising. The Crusaders were no longer able to receive their promised payments from Alexios. Following the murder of Alexios on 8 February, the Crusaders decided on the outright conquest of the city. In April 1204, they captured and plundered the city's enormous wealth. Only a handful of the Crusaders continued to the Holy Land thereafter.

The conquest of Constantinople was followed by the fragmentation of the Empire into three rump states centred in Nicaea, Trebizond and Epirus. The Crusaders then founded several Crusader states in former Byzantine territory, largely hinged upon the Latin Empire of Constantinople. The presence of the Latin Crusader states almost immediately led to war with the Byzantine successor states and the Bulgarian Empire. The Nicaean Empire eventually recovered Constantinople and restored the Byzantine Empire in 1261.

The Crusade is considered to be one of the most prominent acts that solidified the schism between the Greek and Latin Christian churches, and dealt an irrevocable blow to the already weakened Byzantine Empire, paving the way for Muslim conquests in Anatolia and Balkan Europe in the coming centuries.

Wiki Note: Only a relatively small number of the members of the Fourth Crusade finally reached their originally intended goal of the Holy Land. Research indicates that about a tenth of the knights who had taken the cross in Flanders arrived to reinforce the remaining Christian states there, plus about half of those from the Île-de-France. During the ensuing half century the unstable Latin Empire siphoned off much of Europe's crusading energy. The legacy of the Fourth Crusade was the deep sense of betrayal felt by the Greek Christians. With the events of 1204, the schism between the Churches in the East and West was not just complete but also solidified.

Result of the 4th Crusade
KD tiny conclusion: After the 3rd (alleged) Crusade the temporary truce was reached, and the safety of both Christian and Muslim pilgrims was guaranteed. The 4th Crusade turned into a major looting expedition.


What's wrong with the 4th?​
Here is why I think that the 4th Crusade was actually the Crusade #1. While I definitely do not know how to justify the "historical existence" of the official three initial Crusades, I do have an idea how to place a "Big Doubt" label on their "Crusade" status.

Take the Cross (definition): To accept a sign, badge of the Christian cross as part of an oath or vow, especially to take part in a crusade. 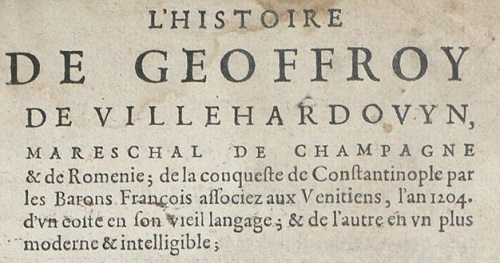 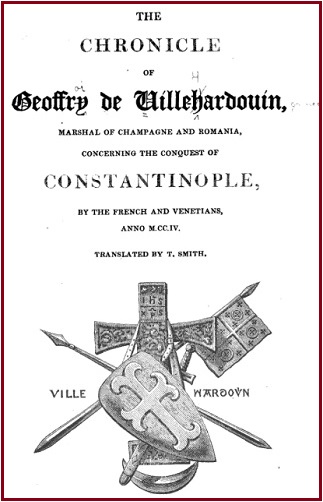 1829 - The chronicle of Geoffry de Villehardouin​
Let us take a closer look at an account of a certain Geoffrey of Villehardouin: 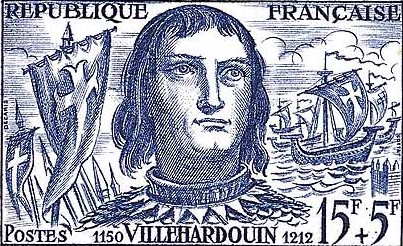 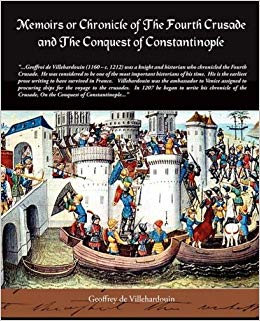 The First Preaching of the Crusade 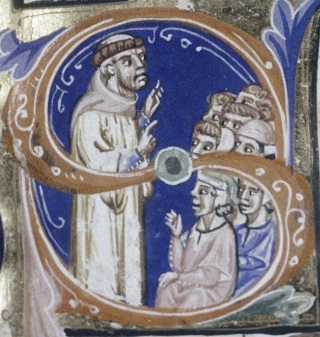 ​
The Conquest of Constantinople: Be it known to you that eleven hundred and ninety-seven years after the Incarnation of our Lord Jesus Christ, in the time of Innocent Pope of Rome, and Philip King of France, and Richard King of England, there was in France a holy man named Fulk of Neuilly - which Neuilly is between Lagni-sur-Marne and Paris - and he was a priest and held the cure of the village. And this said Fulk began to speak of God throughout the Isle-de-France, and the other countries round about; and you must know that by him the Lord wrought many miracles.

Be it known to you further, that the fame of this holy man so spread, that it reached the Pope of Rome, Innocent III; and the Pope sent to France, and ordered the right worthy man to preach the cross (the Crusade) by his authority. And afterwards the Pope sent a cardinal of his, Master Peter of Capua, who himself had taken the cross, to proclaim the Indulgence of which I now tell you, viz., that all who should take the cross and serve in the host for one year, would be delivered from all the sins they had committed, and acknowledged in confession. And because this indulgence was so great, the hearts of men were much moved, and many took the cross for the greatness of the pardon.
KD: The above passage from The Conquest of Constantinople sounds fairly bizarre. First of all there were three previous Crusades, with the Third ending in 1192. The Church of the Holy Sepulchre was safe, and any pilgrim was able to visit it. Yet, there is not a single reference to the previous Crusades.


Crusaders send Six Envoys to Venice​
KD: These future participants of the Fourth Crusade approach the endeavor like they have never heard of the 1st, 2nd and 3rd Crusades. Why would you travel all the way to Venice to learn the logistics of something you (the French) just did 3 times in a row, with the last time being less then 10 years ago.


Getting to Jerusalem?
logistical nightmare​
I think the following information is the most revealing. It shows that there either were no previous Crusades, or that people back then suffered a very serious case of logistical amnesia. How could French forget the steps required to organize a Crusade?
The below passages will be taken from the 1829 translation, for the 1908 one omits quite a few valuable details. 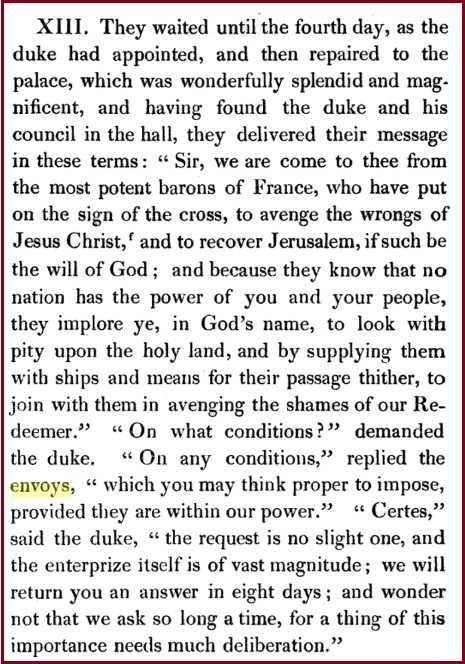 KD Note: The endeavor clearly sounds serious enough for the Venetians to take eight days to think it over. Yet, if we were to believe the official history, the Venetians were supposed to be able to easily organize the logistics. The Venetian Crusade to the Holy Land took place between 1122 and 1124. Essentially both French and Venetians were supposed to have the road to Jerusalem paved with memories and experience: 1st, 2nd, 3rd and Venetian crusades had to provide valuable data. Meanwhile, they appear to be facing the logistical issue for the first time ever. 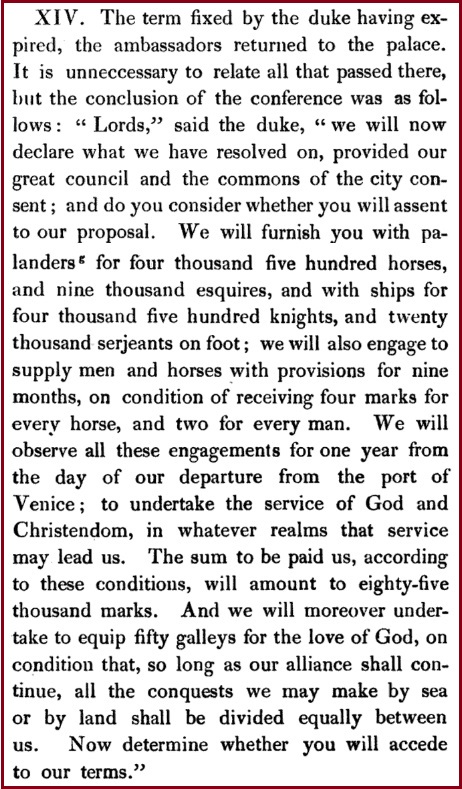 Visited Holy Land Before​
Here is a short list of who supposedly visited the Holy Land prior to the Fourth Crusade:

How Come?​
If we were to believe the official history, between 1100 and 1200, the entire Europe made Jerusalem a revolving door. So, how is it possible that the 1202 Crusade organizers had no clue how to organize logistics?


Cairo equals Babylon?​
I am not really surprised with them discussing the route, though the route to the Holy Land they should have known by then. But why (in the 12th - 13th centuries) they referred to present day Cairo as Babylon remains to be determined. What if Babylon was really in a different place? 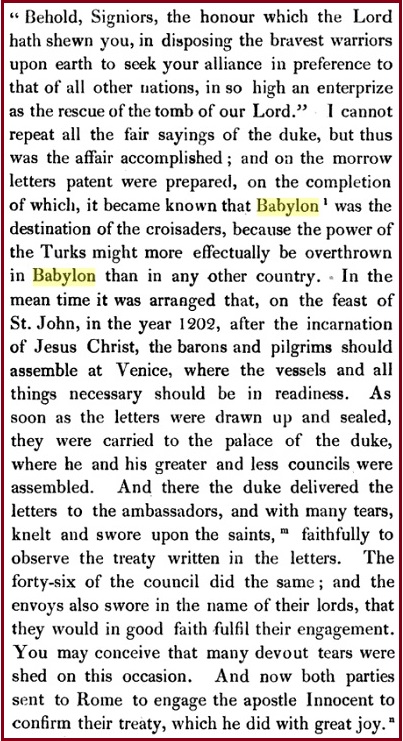 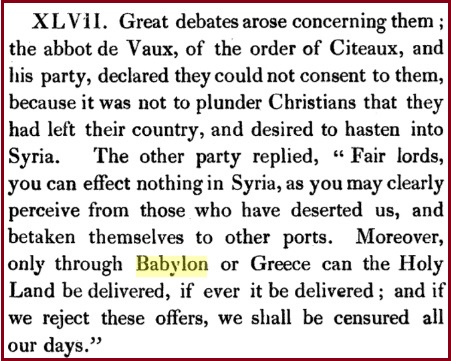 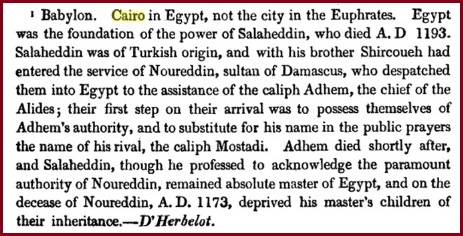 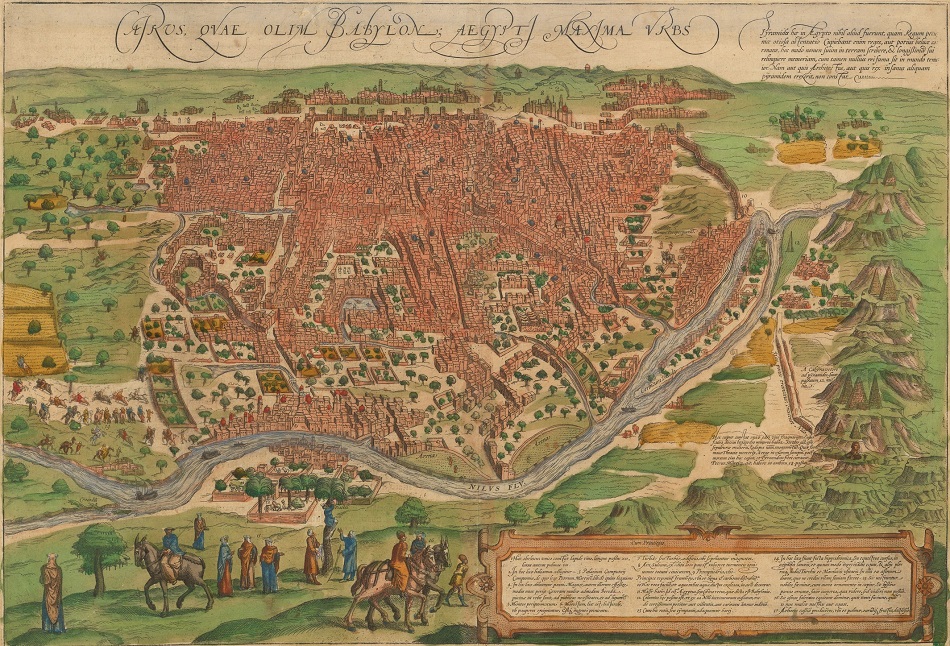 1575 - source + 1 (city plan)
​
All the good and beautiful words that the Doge then spoke, I cannot repeat to you. But the end of the matter was, that the covenants were to be made on the following day; and made they were, and devised accordingly. When they were concluded, it was notified to the council that we should go to Babylon (Cairo), because the Turks could better be destroyed in Babylon than in any other land; but to the folk at large it was only told that we were bound to go overseas. We were then in Lent (March 1201), and by St. john's Day, in the following year-which would be twelve hundred and two years after the Incarnation of Jesus Christ-the barons and pilgrims were to be in Venice, and the ships ready against their coming.

At first glance historians got their bases covered here: Babylon Fortress in Egypt. But when you look at this Babylon Fortress, and compare it to the Egyptian Pyramids, it is quite obvious, that the Pyramids would have made it on the map way before this Fortress did. Besides, the above city plan of the 1575 Egyptian Babylon puts this "Fortress" idea to rest.

With Cairo being founded in 969 CE, and the above maps dated to 1540-1575... did it really take Cairo 600 years to get on a map? Sounds like there is an interesting possibility of the original Babylon being called Cairo today.

KD opinion:
In general this entire Crusade Story is way above my head. I kind of formed my opinion on a few things, and will try to build up upon those in some related future threads.
Click to expand...