I've been eyeballing this region for a while now. Primarily, because I'm trying to figure out a few things pertaining to Alexander the Great. Here is the region we are dealing with.

Map​
And here is what we have on the older maps: 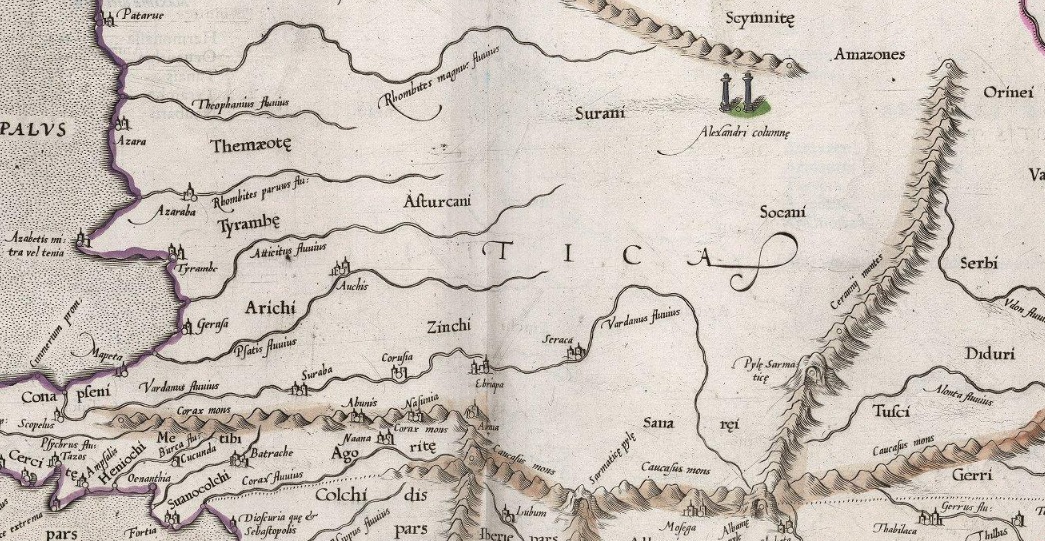 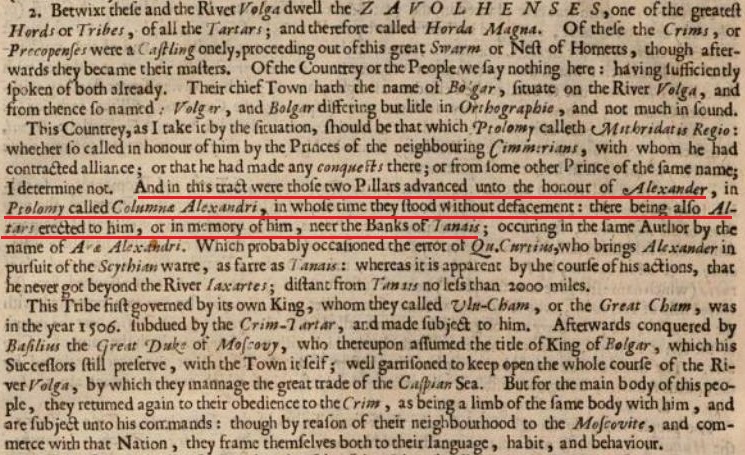 KD: I think these doors could be designating mountain passes, though I do not know. But... I'm after the pillars. The text above is the only one I was able to find. The location suggests that they are/were somewhere in Russia.

Could it be that these maps that you show us are related to the Caspian Gates?
They are also popularly known as the Gates of Alexander, due to medieval literature (such as the Romance of Alexandre del Pseudo-Callisthenes) that attributed to him its construction following Josephus, it is most likely that the Caspian Gates were raised during the century VI, by the Sassanid dynasty. Their goal was to block the passage south through the Caucasus, keeping Anatolia and the Middle East safe from the barbarians to the north. However, the exact location of the Gates is not known, so there are two places that are traditionally believed to have housed them. 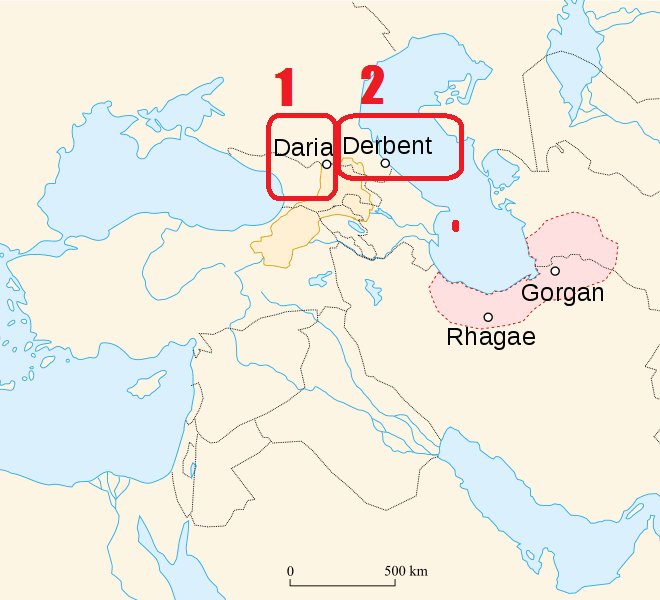 ​
The first is the Darial Gorge, a river gorge on the Russian-Georgian border through which the Terek River runs between Vladikavkaz and Tbilisi. Roman and Persian fortifications existed here at least from 150 BC. known as the Gates of Iberia (for the region of the same name), which Strabo called Porta Caucasica and Ptolemy Fortes Sarmatica.
They are identified with the Caspian Gates because the legendary tradition (also present in the Koran and the Bible with some variations) tells that Alexander the Great built iron gates here to contain the mythical people of Gog and Magog, which Flavius Josephus identified with the Scythians. Ruins of these ancient fortifications are still visible. 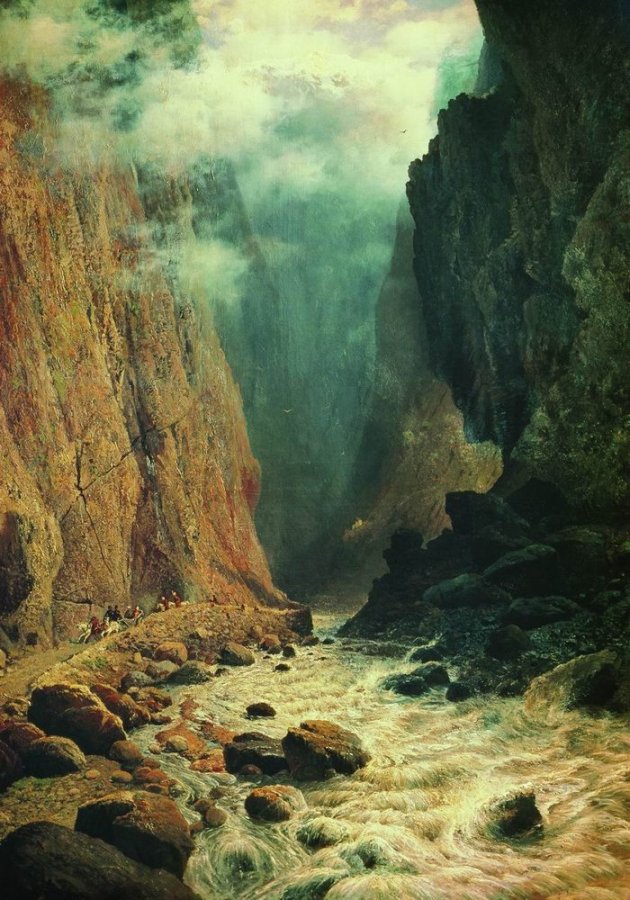 ​
“This people [the Alans] decided at this time to invade Media and more distant territories to plunder them; and with this intention they dealt with the king of Hyrcania, because he was the owner of that pass that Alexander [the Great] closed with iron gates (Flavius Josephus) 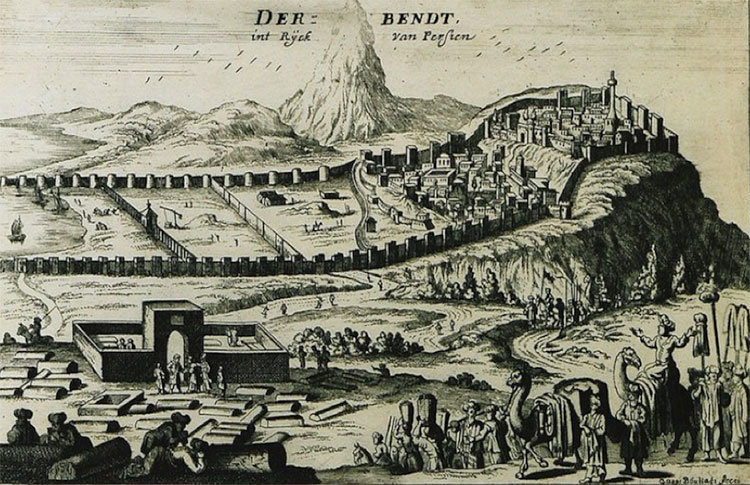 ​
The other place is Derbent, a city south of the Russian Republic of Dagestan and on the border with Azerbaijan. It is traditionally considered the oldest city in the Russian Federation, with more than 5,000 years of history.
In fact, the city has a system of double walls with 30 towers.
What's more, Derbent literally means closed door in Persian. The Arabs knew it as Bāb al Abwab (Gate of gates), and for the Turks it was Demirkapı (Iron Gate).
The Caspian Gates are also mentioned in Marco Polo's Book of Wonders, also citing the people of Gog and Magog but locating them north of Cathay (China). This leads some experts to think that the legend of the gates of Alexander would be the attempt to explain, by Westerners, the stories that came from China about a great king building a great wall.
The Koran also collects the legend. In sura 18 he refers to Dhul Qarnein: literally "the one with the two horns" or more commonly "bicorne", a character inspired by Alexander the Great, who would have built a wall to stop Gog and Magog, a people he identifies as the archetypal enemy of the chosen people. And in surah 21 it says that on the day of Judgment that wall will be reduced to dust, and then Gog and Magog will reappear for the last apocalyptic battle.
Many other medieval legends have their origin in the gates of Alexander, such as that of the Red Jews, Gog and Magog are identified with the Ten Lost Tribes of Israel.

Here is a map of the region, towns of the place of 1736, there is Derbent. 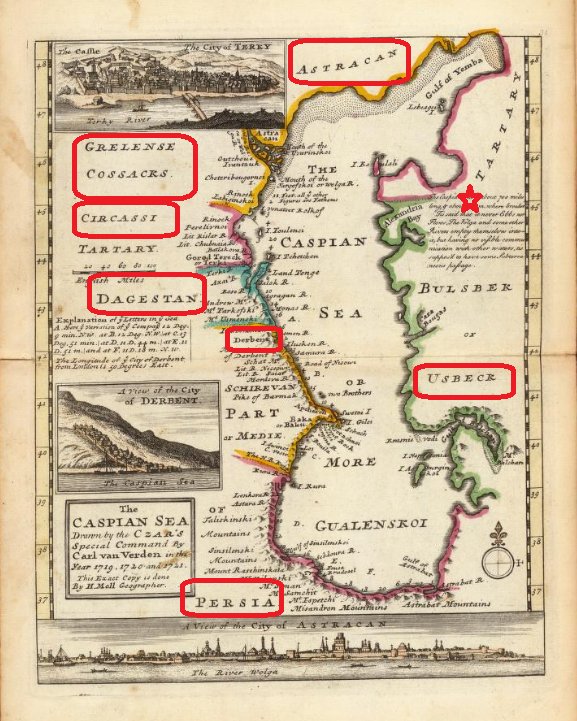 Khazaria with the star of Israel, is it related to what is now Kazakhstan? 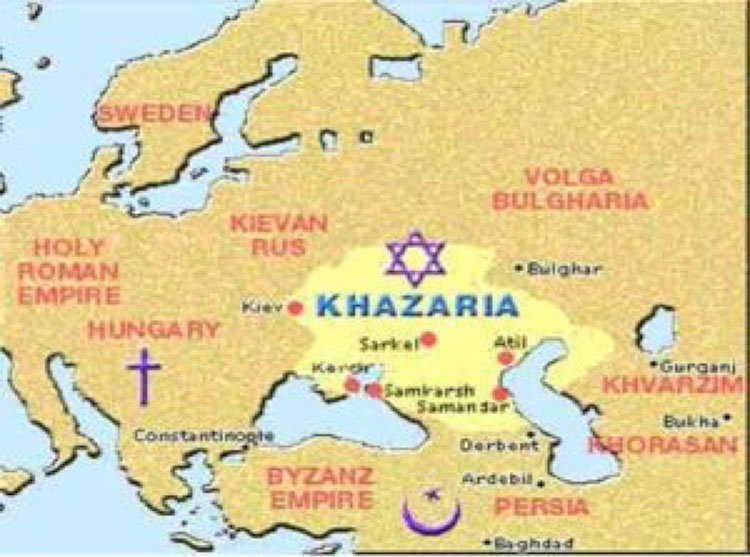 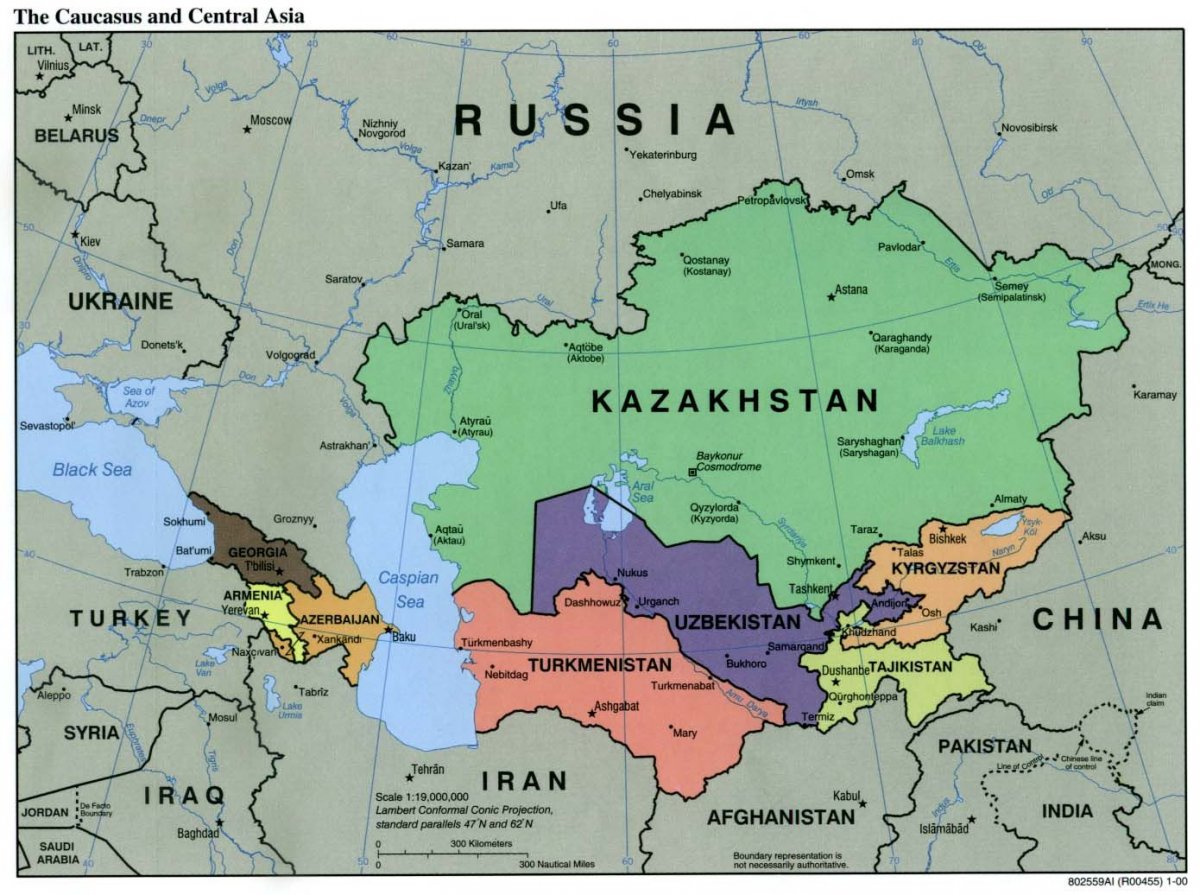 Fomenko says that the real Rome was in 5 places among them the last one was Moscow, is that why the Greco-Roman architecture is abundant? It would be great to locate those pillars, the only thing I remember is having seen a similar pillar on the Map of Urbano Monte that said "Ave Cesaris" and "Ave Alexandris" 1587 MAP URBANO MONTE: 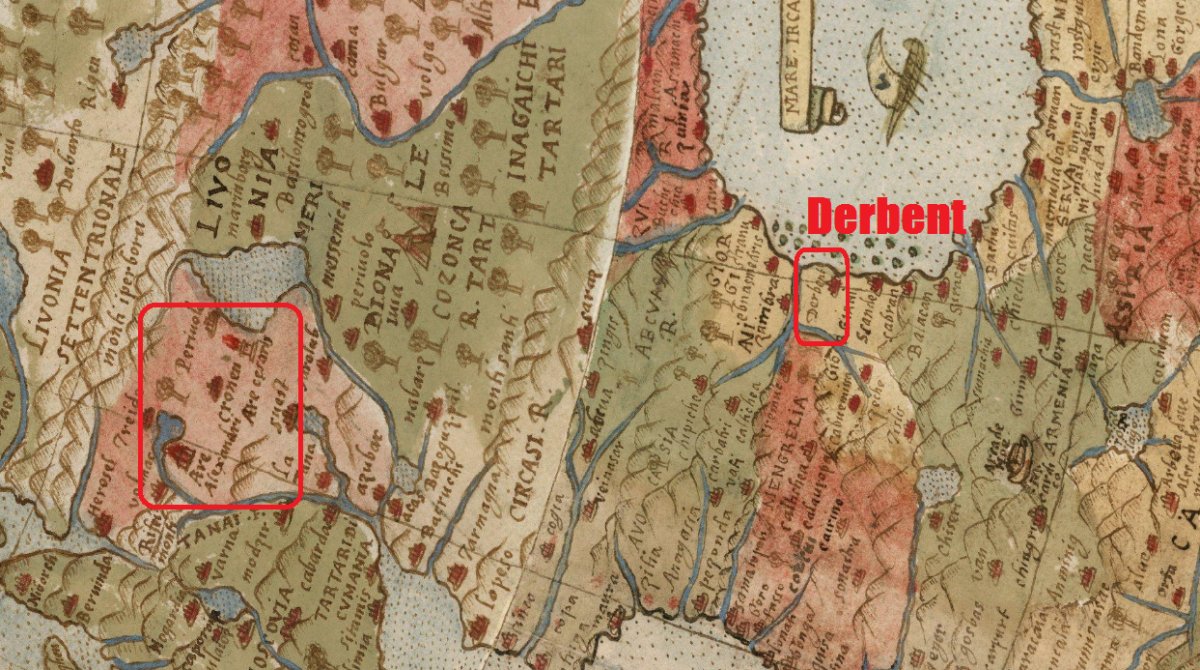 I have not seen this. Sounds pretty interesting. Daria location gate does appear to match the OP maps.

HELLBOY said:
I remember is having seen a similar pillar on the Map of Urbano Monte
Click to expand...

Good eyes you have. I did look at this 1587 map, but did not spot them. The location of "Ave Alexandri" appears to be northwest from the pillars on the OP maps. 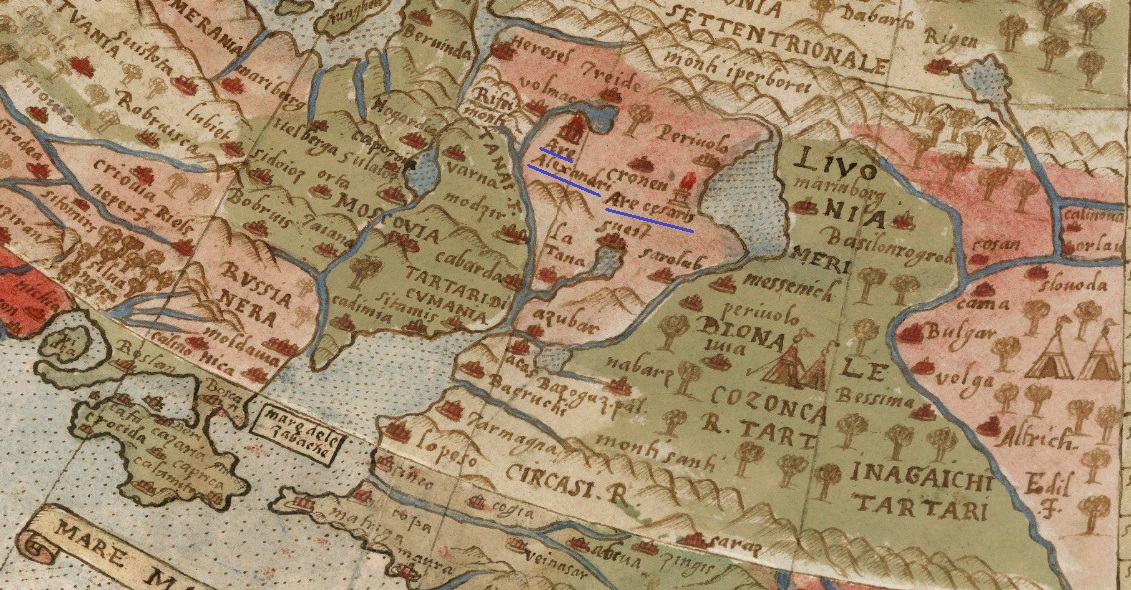 Source
​
Well, those are definitely not pillars. Do they say "Ave" or "Are"? "Ave" (apparently) is "Hail" in Latin. 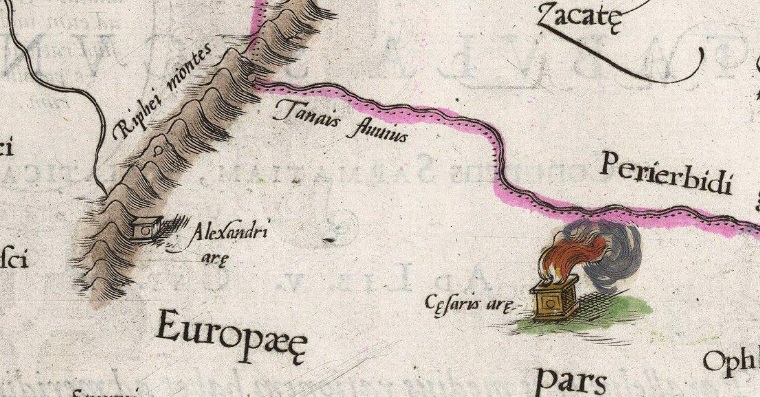 ​
The Fra Mauro map dated with 1450 has this on it. I have not spotted any Alexander related pillars though.

Source​
And considering that the Volga river is nearby, we should probably mention that prior to becoming Volga, it was called the Rha river. Wondering if somehow related to this Ra here. 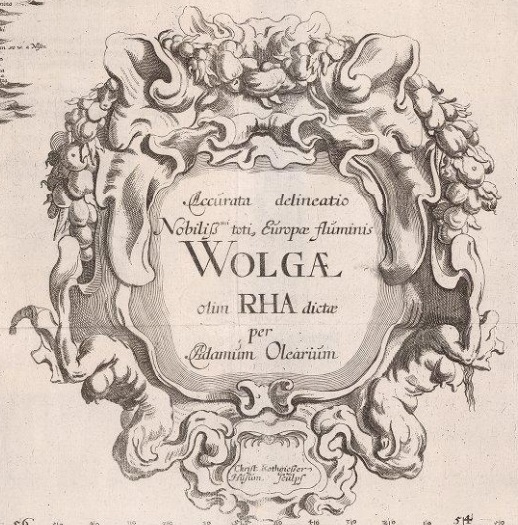 Newbie post Very Interesting ........... Im sure you have all thought of the two masonic pillars but im thinking along the lines of the bible where Moses and the tribes wondered through the wilderness for 40 years guided by a pillar of fire during the night and a pillar of smoke during the day, Moses also has been depicted with the horns.........

Funny that in the last week both Derbent and Astrakhan have come onto my radar. 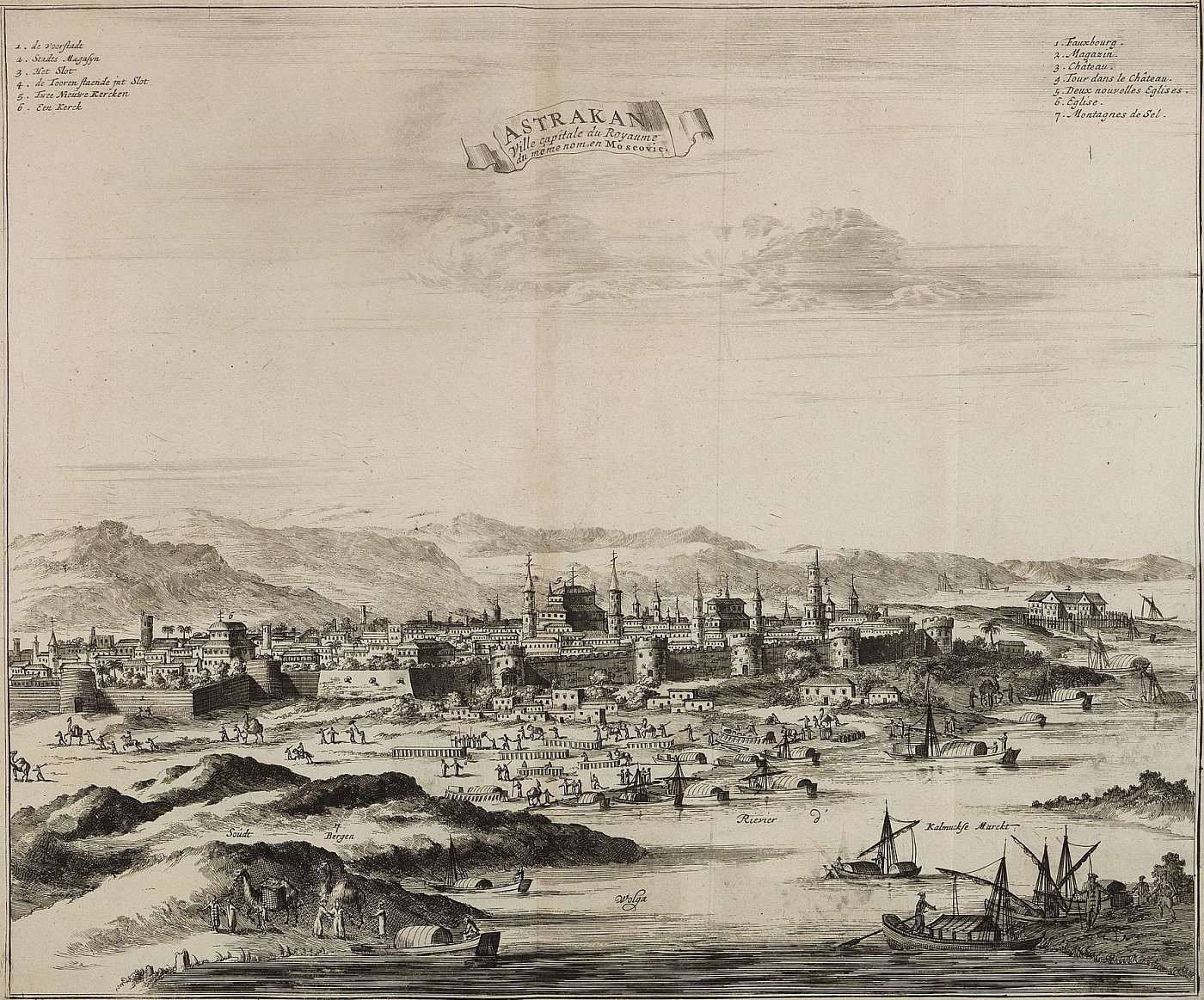 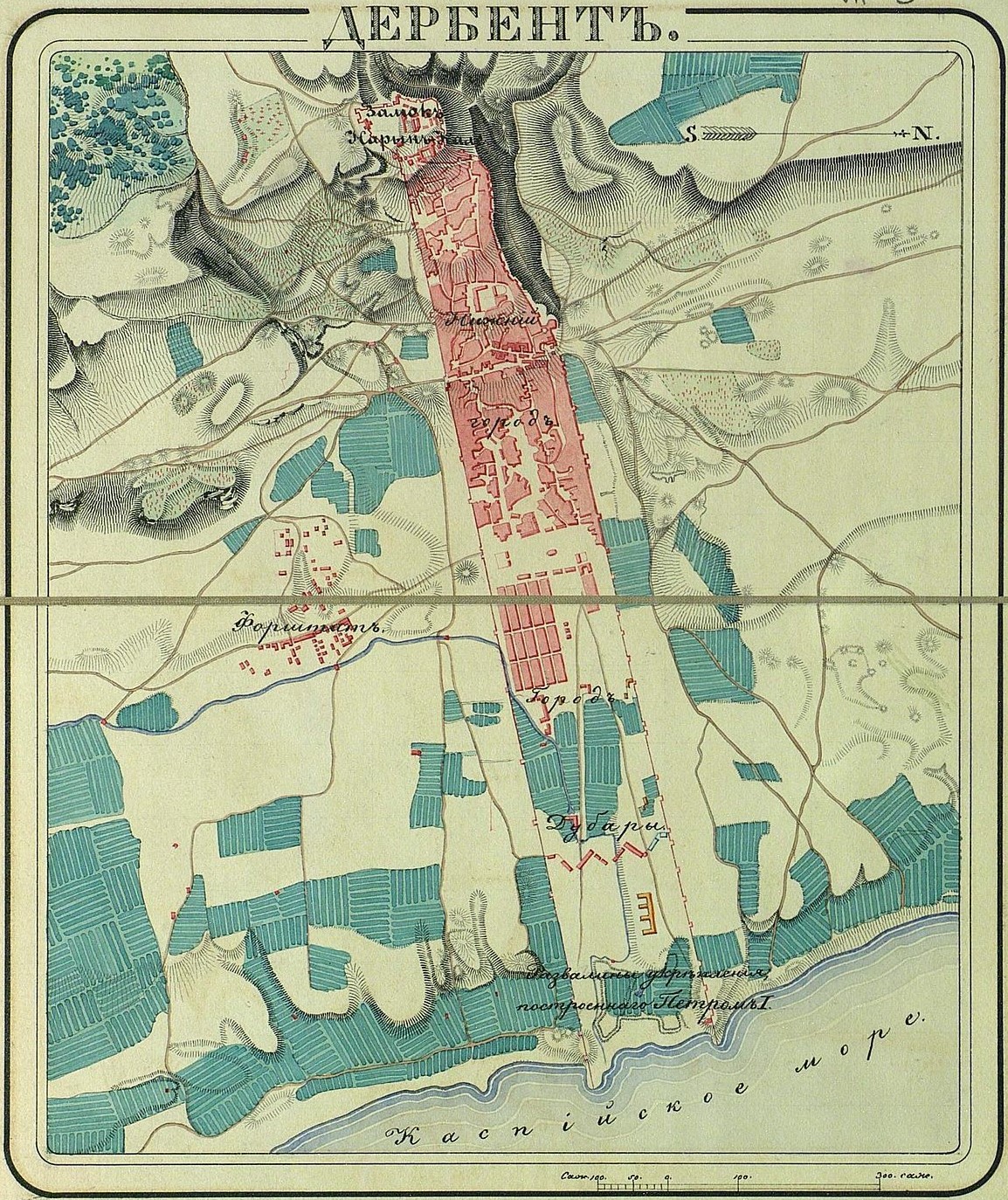 ​
I am also trying to trace these WOW lines to these city's, there are a load in Georgia and lots of them to the north with both these locations in between. 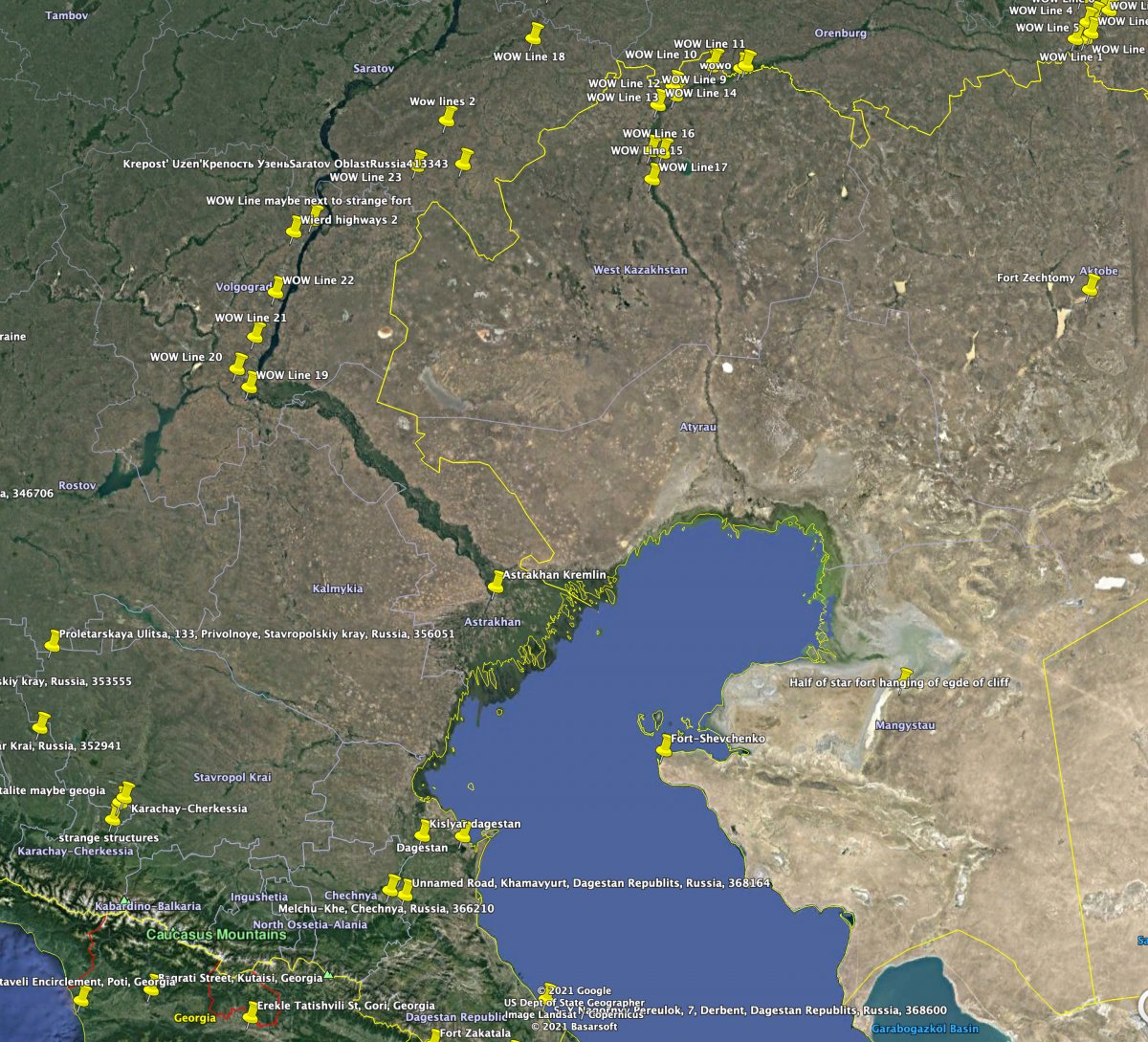 Another thing that piqued my interest is the land SW of Astrakahn(astra means weapon in sanskrit), it loos very wierd, i first thought it was a graphical error in GE but it is like this, looks to my eye, damaged, like skin that has been burnt and healed, I wonder what could have made such an effect over such a big area and wonder if it happened at the same time as the destruction on the Mangystau fort. 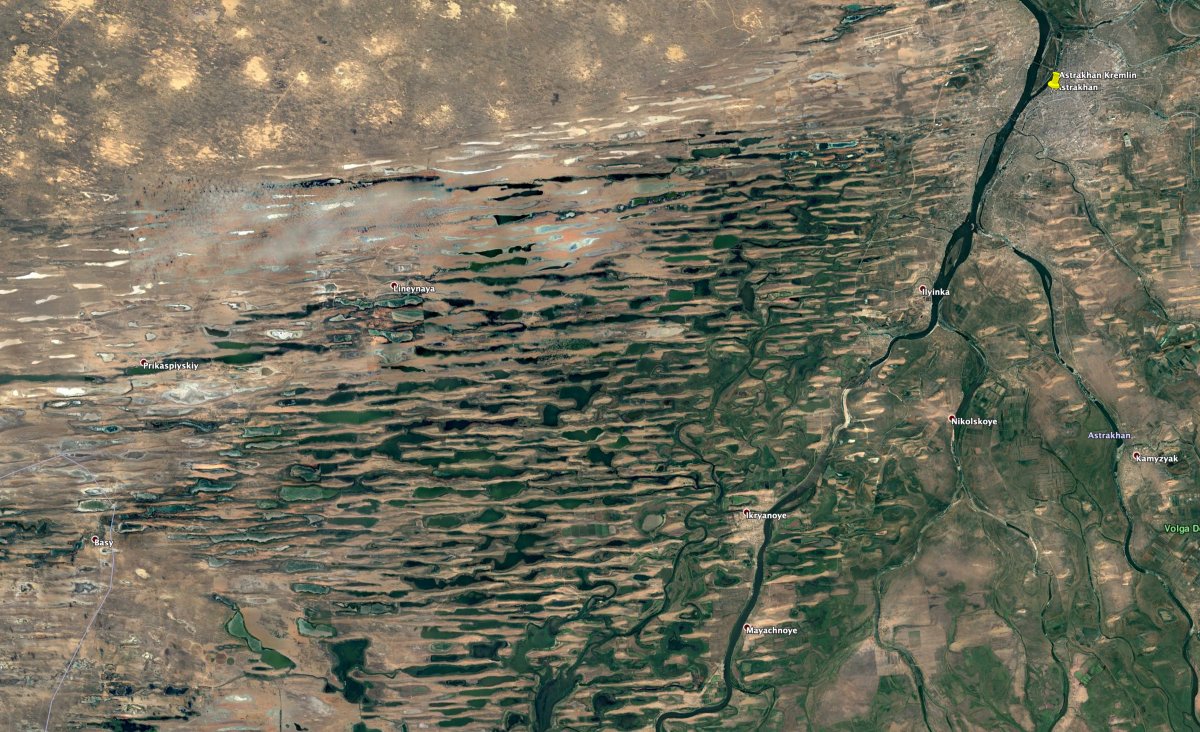 ​
Astrakhan is really quite impressive.