USA Urban Fires
(no other countries)​
I don't think the below list of "Fires" could be called a "surface scratch," for it's not even close. What am I talking about here? Take the below list and apply it to the entire United States territory. You will simply have to change a city/town name. Here is an example for you. Just click on this link. The photographs you will see belong to the 1904 Urban Fire in the city Baltimore. Now spread this devastation throughout the entire U.S. of A. territory. 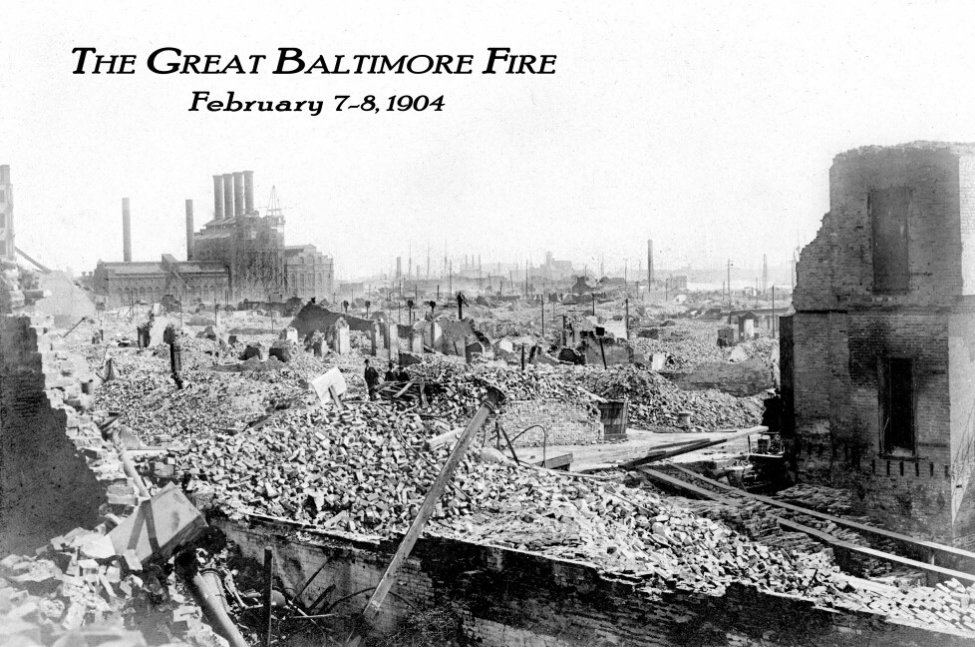 I called this article a "Battlefield America", because after all the photographs I've seen, and bogus stories I've read, this is the impression I get. Yet, the entire issue is being downplayed beyond belief. The issue does not stop with the United States, but this tiny article is limited to the US only .
If you run into an Urban Fire not mentioned in the list below, please do not hesitate to share it with us. As well, feel free to post photographs from the below 101 fires. Please provide some accompanying comments if you do.

Ultimately, all of us would like to know, what could have caused the devastation. Don't hesitate to step forward with your opinion. 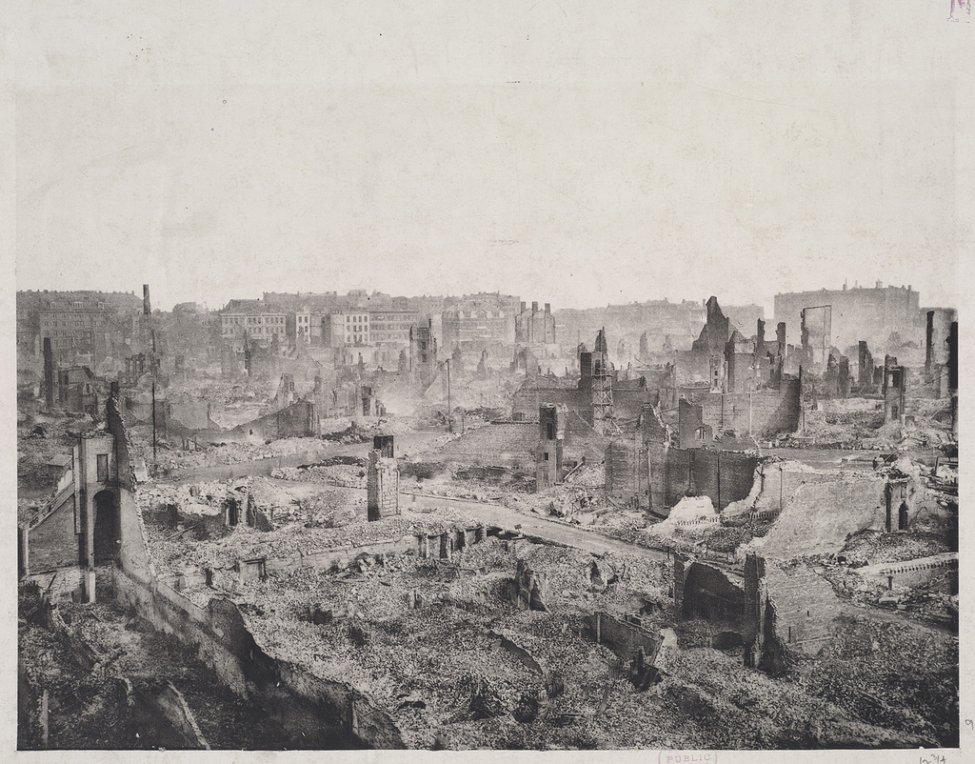 Great Boston Fire​
IMPORTANT: Please keep this comments section limited to the US fires only. There are way to many of these "fires" out there, to crunch the entire world into one place. At some point I will create separate articles for a few additional countries/regions.

KD: The questions remains the same - what was the real cause of the damages, and why the truth is being hidden from us?
Click to expand...

Dear admin, please help me to sort/move this reply to a proper place, if it seems relevant. Thanks!

It does not fit under this post, because it has not happened in the USA, it happened many years later than the last great fire mentioned in the original post and it happened during a war.

I am perceiving some similarities when comparing the original sources given in Wikipedia and actual scientific resources about the event and the place it occured: the city of Changsha has been one of the oldest cities in China, until in 1938 in a great fire 90% of its buildings burnt down, without any belligerent forces being close, obliterating irrecovably incomparable sites and artifacts of the past, killing lots of people, just to become a major place of settlement right after the event.

I want to begin with a report of a witness:

The American missionary doctor who worked in Changsha at the Yale-in-China Hospital, Phil Greene, wrote that when 40,000 refugees, numerous KMT generals, and then the Generalissimo descended on the Hunan capital, chaos and panic spread:
October 26: the arsenal behind the Hospital blew up just one big bang and the whole place was gone—about one hundred casualties, thirty dead. At the Hospital we just kept ahead of the patients. It took as long to dig them out as it did to fix them up.
October 28: 21,000 wounded [from Wuhan] reported in town . . .
October 29: The town is moving out fast, the doctors are sticking by . . .
November 1: People expect Changsha to fall in two weeks the Gov- ernment has given us five good junks which will take about 200 tons of hospital supplies to Yuanling ...
[Some days later]: the entire town [is] leaving by boat, train, buses, rickshaws and wheelbarrows after prayer meeting, some friends told us of having seen oil and cotton waste distributed to ward officials for setting fires. So many rumors ...
November 11: only a small fraction of the city’s half million population [remain]. I am the only doctor left [at the mission] . . .
[November 12]: uncanny stillness . . . a deserted, evidently doomed city.
(Taylor, Jay. The Generalissimo: Chiang Kai-Shek and the Struggle for Modern China. Harvard University Press, 2009. JSTOR, p. 159)
Click to expand...

Then, fire starts on November 13.

"The Changsha fire of 1938 (Chinese: 长沙大火), also known as Wenxi fire (Chinese: 文夕大火), was the greatest human-caused citywide fire in Chinese history. [..] The result of this fire made Changsha one of the most damaged cities during World War II, alongside Stalingrad, Hiroshima, Nagasaki, Tokyo, Dresden and others. (Wikipedia: 1938 Changsha fire)
Click to expand...

More than 30,000 people lost their lives during the fire. Over 90%, or 56,000, of the city's buildings were burned. The fire also disabled commercial trading, academic institutions and government organizations throughout the city. (Wikipedia: 1938 Changsha fire)
Click to expand...

Before the fire, Changsha was one of China's few major cities that had not moved its site in 2,000 years. The fire, however, annihilated all the cultural accumulations that the city retained since the Spring and Autumn period. (Wikipedia: 1938 Changsha fire, Wikipedia does not have a source for this, it corresponds to the Donald B. Wagner, Acta Orientalis source, which I quoted further down)
Click to expand...

What are the similarities?

The "chatoyant" figure named Generalissimo, was Chiang Kai-shek, who is considered being involved in the fire events destroying Changsha, minor inconsistencies ahead.

Chiang Kai-shek (31 October 1887 – 5 April 1975), also known as Chiang Chung-cheng and romanized via Mandarin as Chiang Chieh-shih and Jiang Jieshi, was a Chinese Nationalist politician, revolutionary and military leader who served as the leader of the Republic of China from 1928 until his death in 1975, first in mainland China until 1949 and then in Taiwan. (Wikipedia: Chaing Kai-shek)
Click to expand...

One the one hand, it is said he talked about the idea of burning the city of Changsha.

Chiang ordered the destruction of any usable facilities or plants that remained in the city, and the garrison forces and remaining government personnel then withdrew in good order. (Taylor, Jay. The Generalissimo: Chiang Kai-Shek and the Struggle for Modern China. Harvard University Press, 2009. JSTOR, p. 158)
Click to expand...

On the other hand, he also denied having ordered the arson of Changsha.

Perhaps Chiang ordered the deed, but he had not before called for such a total destruction of a city about to be lost nor did he afterward. On Monday (November 14), the governor issued an apology, saying he had not ordered the arson. (Taylor, Jay. The Generalissimo: Chiang Kai-Shek and the Struggle for Modern China. Harvard University Press, 2009. JSTOR, p. 160)
Click to expand...

A third version is found in Wikipedia:

Due to an organizational error (it was claimed), the fire was begun without any warning to the residents of the city. The Nationalists eventually blamed three local commanders for the fire and executed them. (Wikipedia Chiang Kai-shek, paragraph on the sino-japanese war)
Click to expand...

Anyway, some important possible witnesses were "found dead". Have they been left to be found?

On November 16 Chiang arrived to investigate, and the missionaries soon learned that the garrison commander, the regimental commander, and the chief of police had been shot. (Taylor, Jay. The Generalissimo: Chiang Kai-Shek and the Struggle for Modern China. Harvard University Press, 2009. JSTOR, p. 160)
Click to expand...

In the aftermath, also some high official in that region is said to have resigned (see the same sources), but we already heard enough, didn't we?

Now a bit more about Changsha itself:

Until very recently nearly everything that was known archaeologically of the ancient Chinese state of Chu came from excavations in the vicinity of Changsha, Hunan. Some 2000 Chu graves have been excavated here. A chronology for these graves which is widely but not universally accepted places about 100 of them in the Spring and Autumn period: this dating implies that some twenty iron artefacts found in the graves are to be dated to ca. 500 B.C. or before. These would then be among the earliest iron artefacts. (other than meteoritic iron) yet found in China. (“The dating of the Chu graves of Changsha: The earliest iron artifacts in China?”, Acta Orientalia, 1987, 48: 111-156. Link)
Click to expand...

From the same source:

Antiquities from the ancient graves of Changsha have since the 1930s been bought by collectors at high prices, and grave-robbery has often been a lucrative sideline for the people of the area. Changsha pottery, for example, is a standard category in the art trade; it can be recognised by characteristic stains from the heavy red clay soil of the region.
Click to expand...

This doesn't make any sense to me.

I finally had enough when I read this:

The next day, Greene received a letter from Madame Chiang, who had been his wife’s classmate at Wellesley, declaring that the Generalissimo also was not responsible. (Taylor, Jay. The Generalissimo: Chiang Kai-Shek and the Struggle for Modern China. Harvard University Press, 2009. JSTOR, p. 160)
Click to expand...

So I guess Mr Greene was not a woman, however, this:

Summary:
It is comprehensible when false intel motivates a military leader to take action, like evacuating civilians from dangerous areas, agreed. It does not motivate to burn the city itself to the ground, unless this destruction is part of the actual agenda or the actual agenda itself.

This is especially not comprehensible, when the city is to be considered a place of major cultural heritage - not even thinking about the order of magnitude we're talking about here - in the case of Changsha.

I need to close here, because otherwise it's getting too long. About such a possible agenda, a quick read about the Siku Quanshu can help, like the following paragraphs:
Additionally some well known traditions about the same are also described in this article:
Question: Could Changsha be the subject of file and claw the 322 way cooperating with local interests to hide the true history by simply destroying historic sites and artifacts?

Edit: typos
You must log in or register to reply here.
Similar articles