Please read this article and tell me that TPTB are not prepping for the next reset. If you remember, it was in 2006, when Al Gore's An Inconvenient Truth came out. Its purpose was to educate people about the so-called global warming. The term gradually morphed into what we now call Climate Change. At some point in 2019, there was a period of time when different variations of the below phrase were frequently transmitted via Mass Media:
I am among those people who do not trust the concept of Global Warming. At the same time, when I heard this "12 year" time frame being mentioned, it made me think about what TPTB could be hiding behind it. 12 years is a bit too precise to my liking. And even if the below content is in no way related to this 2006 "Global Warming" movement, I still do think that the 12 year time frame provided by TPTB in 2019, signifies something of great importance.

The Global Seed Vault​
The Svalbard Global Seed Vault is a secure seed bank on the Norwegian island of Spitsbergen in the remote Arctic Svalbard archipelago. Conservationist Cary Fowler, in association with the Consultative Group on International Agricultural Research, started the vault to preserve a wide variety of plant seeds that are duplicate samples, or "spare" copies, of seeds held in gene banks worldwide. The seed vault is an attempt to ensure against the loss of seeds in other genebanks during large-scale regional or global crises. The seed vault is managed under terms spelled out in a tripartite agreement among the Norwegian government, the Crop Trust, and the Nordic Genetic Resource Center. 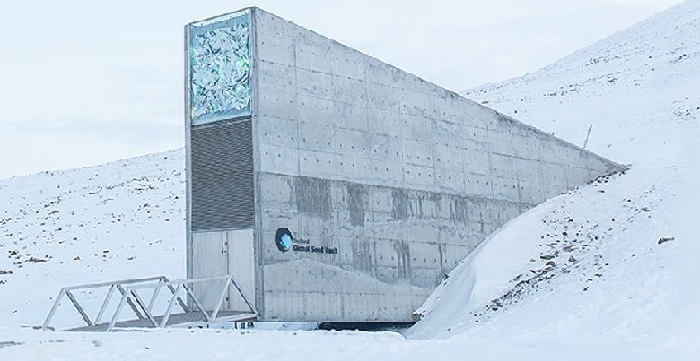 A few related quotes from various sources:
KD Speculation: could TPTB be influencing the future survival of certain nations/ethnicities?

Perpetual Repercussion​
This article would not exist without this Perp Rep art thingy, for its meaning motivated me to share my thoughts. Running the length of the facility's roof and down the front face to the entryway is an illuminated artwork named Perpetual Repercussion by Norwegian artist Dyveke Sanne that marks the location of the vault from a distance. In Norway, government-funded construction projects exceeding a certain cost must include artwork. The Norwegian State agency overseeing art in public spaces, engaged the artist to propose an artwork for the Seed Vault. The roof and vault entrance are filled with highly reflective stainless steel, mirrors, and prisms. The installation reflects polar light in the summer months, while in the winter, a network of 200 fibre-optic cables gives the piece a muted greenish-turquoise and white light. 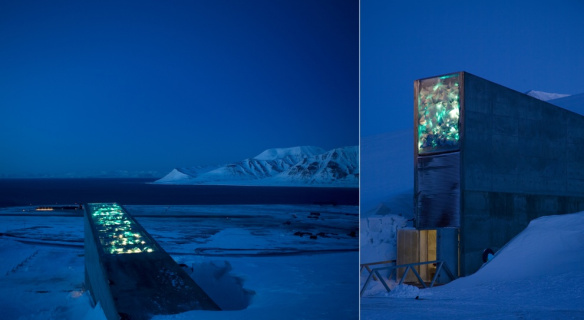 I'm not trying to insult your intelligence here, but I figured that breaking our Perpetual Repercussion down would not hurt this article.

The Svalbard archipelago is declared demilitarized by 42 nations and the company describes the location as "one of the most geopolitically secure places in the world".

KD: I don't know, may be I am being overly suspicious but this is the only way these dots connect for me.