Some ship designs assigned to 1850s are rather baffling. How they went from sailing ships to something you can see below, has to have a reasonable explanation. Where is the stuff in between? We did not go from a rotary phone directly to iPhone 11. It appears those 19th century inventors were doing just that left and right. 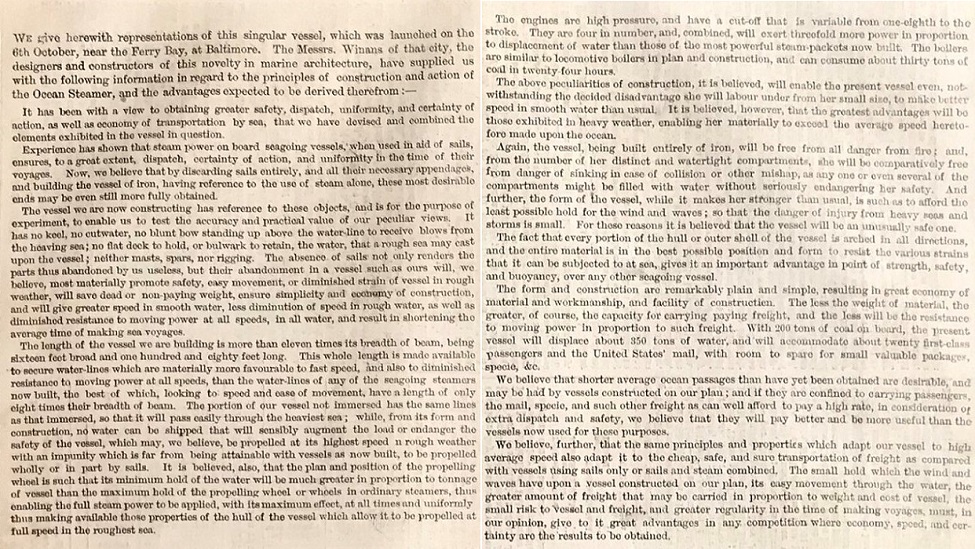 Ross Winans​
Ross Winans was an American inventor, mechanic, and builder of locomotives and railroad machinery. He is also noted for design of pioneering cigar-hulled ships. Winans, one of the United States' first multi-millionaires, was involved in national and state politics, a southern-sympathizer and was a vehement "states' rights" advocate. His outspoken anti-federal stance as a member of the Maryland House of Delegates, the lower chamber of the General Assembly, (state legislature) led to his temporary arrest on board a Baltimore and Ohio Railroad train returning from an early session of the legislature held in the western Maryland town of Frederick to avoid the Union Army-occupied state capital of Annapolis in April–May, 1861, to consider the possibilities of state secession, during the early decisive period of the American Civil War. 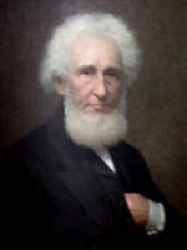 1796-1877
1876 portrait by Frank Lathrop
​
Ross Winans was born in Vernon Township, New Jersey on October 17, 1796. His parents were William and Mary Winans. He married Julia de Kay (1800-1850) in 1820 and they had five children. He moved his family to Baltimore, Maryland in the late 1820s and did business with the newly founded Baltimore and Ohio Railroad.

The Winans Cigar Ship​
In the mid-19th Century, Winans and his son Thomas designed and built a series of spindle-shaped boats, usually referred to as the "cigar ships" or "cigar boats". The first was constructed in 1858 and featured an unprecedented (and in the end, technically unfeasible) midship propeller, enclosed in a shroud. This propeller was driven by steam engines located in each hull section. The intent was to allow the ship to progress with less disturbance from weather and waves.

​
This ship was discussed at length in the pages of the "Scientific American" national journal/magazine, and in the end remained tied up at the Winans docks at Ferry Bar, southside of the Whetstone Point peninsula and along the north shore of the Middle Branch or Ferry Branch of the Patapsco River. It was never subjected to a sea trial. 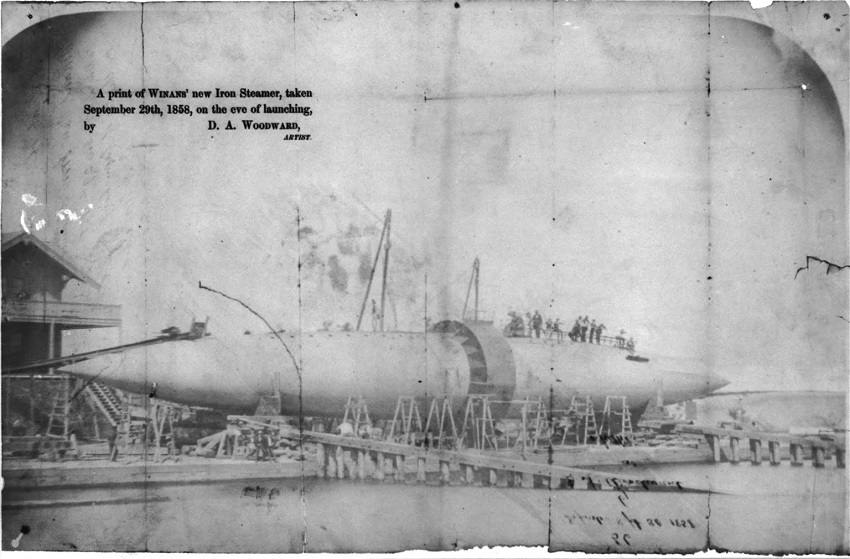 ​
In Winans's own words, "the length of the vessel was more than eleven times it breadth of beam, being 16 feet wide by 108 feet long." It included four high pressure steam engines, driving a large iron wheel with fins amidships. It did achieve a speed of 12 miles per hour on its trial in January 1859. He then lengthened the ship to 194, and then 235 feet. It went to England for further trials, but was never a great success. 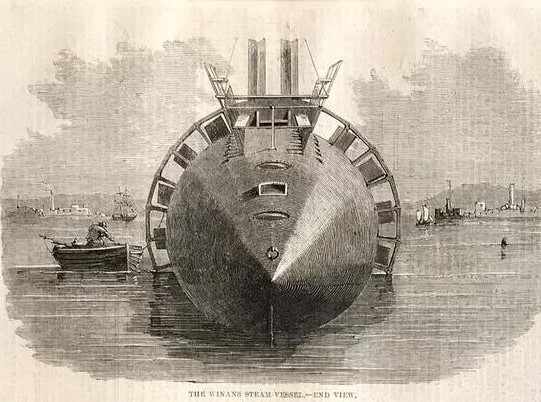 After the Civil War, Winans and his son took their enterprise to Europe, and several similarly-designed boats were built in England and in St. Petersburg, Russia. None of these were also put to full sea trials, though press reports survive of trips in the Solent and the English Channel.

​
The boats themselves remained tied up in Southampton into the 1880s, but inspired no imitators. The Russian Naval Journal reported on the ships in 1858. Winans shifted his interests outside of the United States during the Civil War. 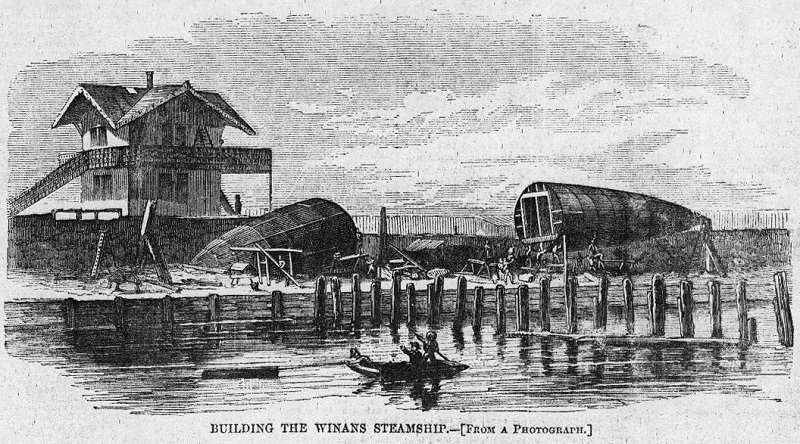 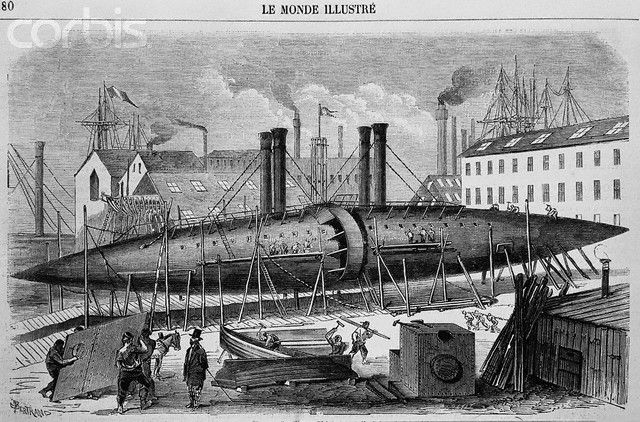 Further Development​
It appears that there was some development of these ships. At least the below image appear to suggest just that. 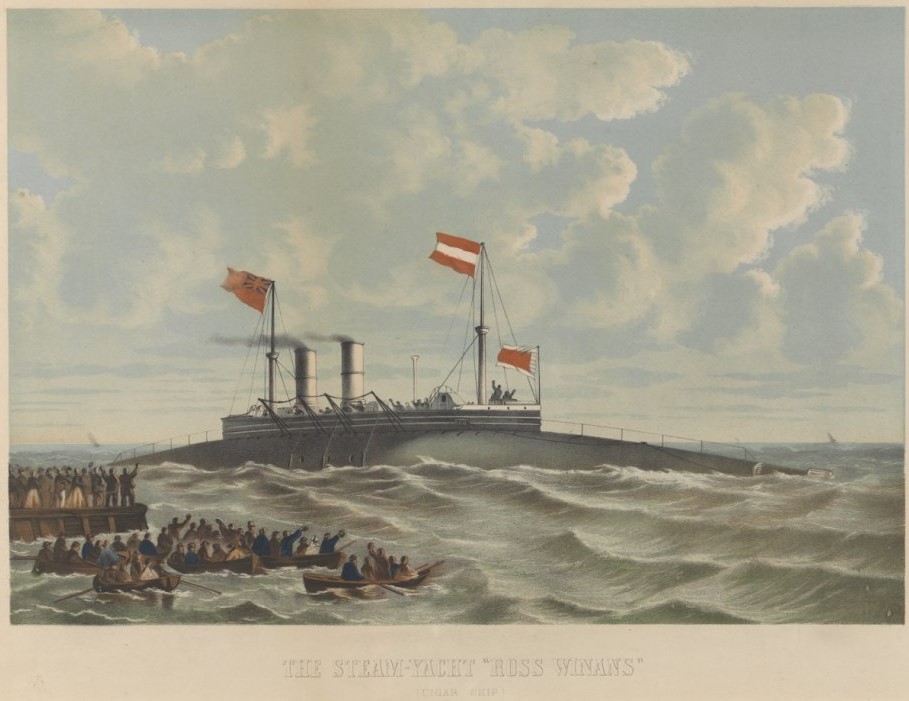 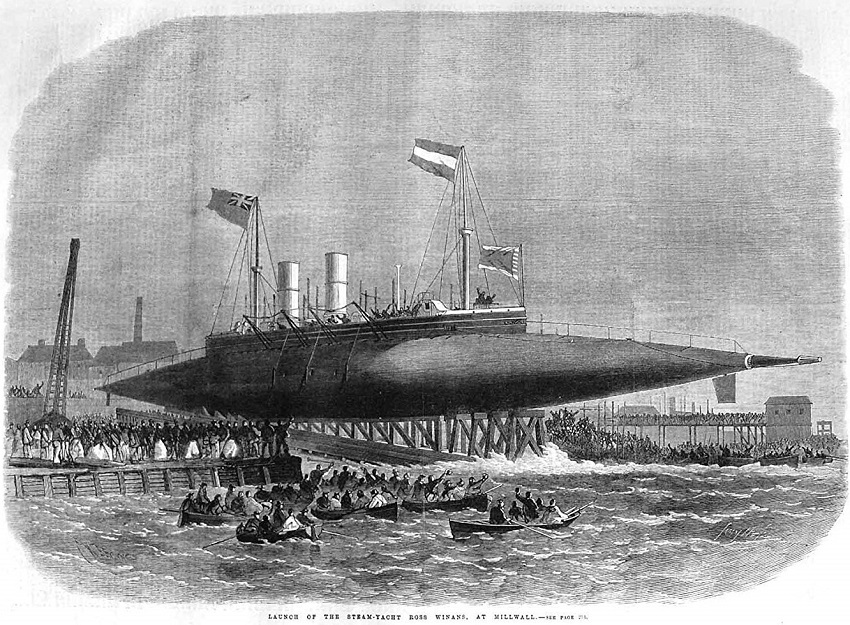 William Gilhen Archive
​
1878: The ' Cigar Ship' and other sailing vessels anchored near to the busy port.

???​
Quote, "An unknown artist created a pen and ink and watercolor painting of a two-masted sailboat with a cigar-shaped hull. My first reaction was that this was a general application of the cigar hull to a sailing vessel, but John Lamb suggested it might be the Walter S since the two masts and bowsprit fit the description. (Dodds5 is the only one I know of to mention masts and bowsprit for the Walter S. I wonder if he had seen this painting or a similar depiction.) Examination of the painting reveals no sign of steam power and the boat depicted appears to be about 125 feet long, much more than the reported original Walter S length. The deck also occupies a much greater proportion of the total length. Still, since the watercolor shares its provenience with what may be a very early impression of the Ross Winans, this could be an impression of a boat that eventually became the Walter S Winans. The painting might also depict the Walter S after its 1877 renovations."

​
Quote, "An original pen and watercolor painting labeled "Yacht Ross Winans" depicts a very different ship. My restored image just below shows a tall stack, resembling the steamer stacks, no masts, and no visible propellers. Since this is a side-on view there may be a pair of stacks side-by-side, like sometimes pictured on the steamer. The numerous superstructure differences, an indicated length of 450 feet, and superficial resemblance to the steamer suggest that this is a very early impression of the yacht, predating those above. The non-perspective view hints it was based on a side-view engineering concept sketch." 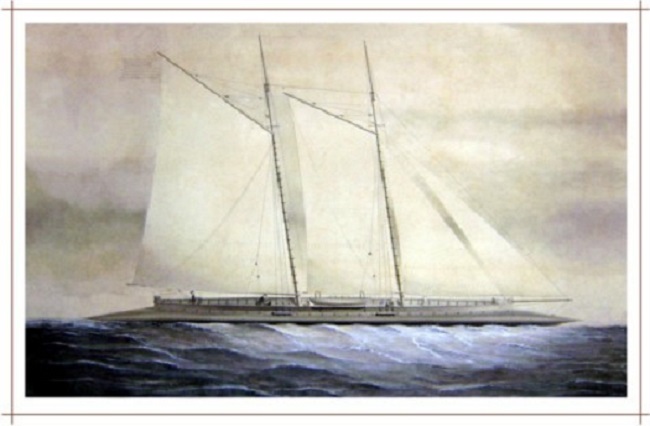 KD: In 1858, out of nowhere, comes this design. I miserably failed to find any useful info on these cigar shaped boats. Courtesy of Ross Winans, these boats just popped up. And then... they were gone.