Stephan Farffler (1633 – 1689), was a Nuremberg watchmaker of the seventeenth century whose invention of a manumotive carriage in 1655 is widely considered to have been the first self-propelled wheelchair. The three-wheeled device is also believed to have been a precursor to the modern-day tricycle and bicycle.

​
According to the below image, he could also be considered the inventor of the Recumbent Quadracycle. Considering that he died in 1689, he had to do it some time prior to 1689.
Pedals History (official):
KD: This device below does not look like a wheelchair. At least to me it does not. His wheelchair is posted below the quad images.


1817 Draisine: before there was a bicycle 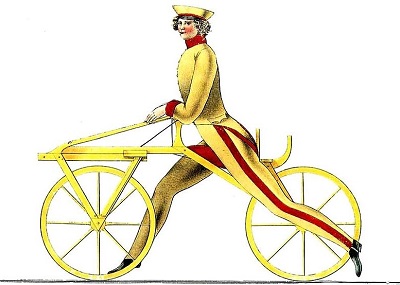 ​
P.S. Additionally we have this for history, but what do we know?
Click to expand...