The Citadelle Laferrière: who, when, how and why?

I have been baffled by this structure (located in Haiti) for a while now. I still do not know what angle to approach it from. The issue here is the significance of some intertwined details. I came up on this fortress researching the Louisiana Purchase. I think we have an altered narrative superimposed on top of the existing events and structures. Whether the true events will ever be understood by us, remains to be seen. At the same, I believe, we can figure out questionable, or making very little sense things.

KD: We have Napoleon, the Black Napoleon, Thomas Jefferson, Territory of Loisiana, Louisiana Purchase and many other people/events in the mix here. To avoid clustering, let us please keep things in order, and reserve this article for the Haiti related information only. This is just the beginning, but it could turn into a series of fascinating related articles.

Haiti: history​
Considering that our fortress is located in today's Haiti, here is a short summary of the related history of Haiti aka Saint-Domingue. 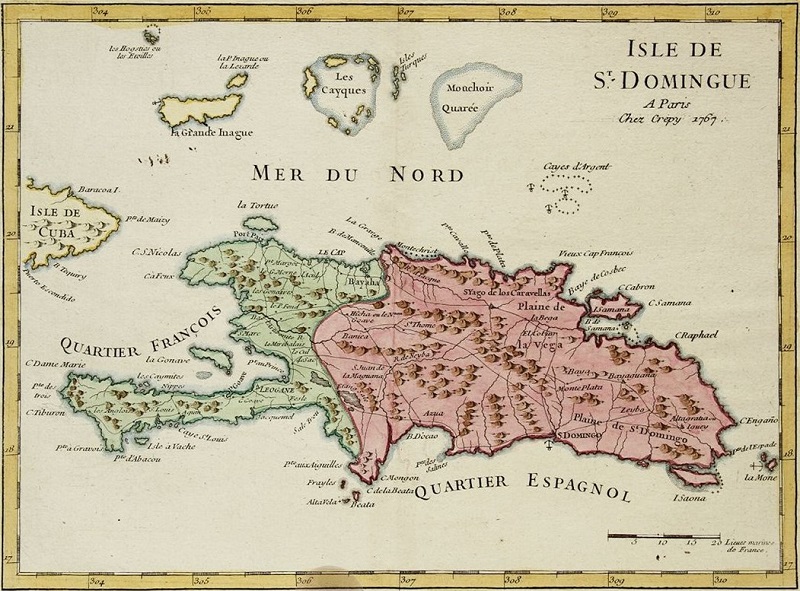 ​
Our narrative compliant history tells us that Spain owned the entire island for approximately 200 years, but between 1659 and 1697 just gave up approximately 10,710 sq mi of plantation lands to France. With no fight...

It is one of the largest fortresses in the Americas and was designated by the UNESCO as a World Heritage Site in 1982 - along with the nearby Sans-Souci Palace. The mountaintop fortress has itself become an icon of Haiti. The Citadel was built by Henri Christophe, a key leader during the Haitian slave rebellion (1791–1804), after Haiti gained independence from France at the beginning of the 19th century.


...the largest fortress in Americas... 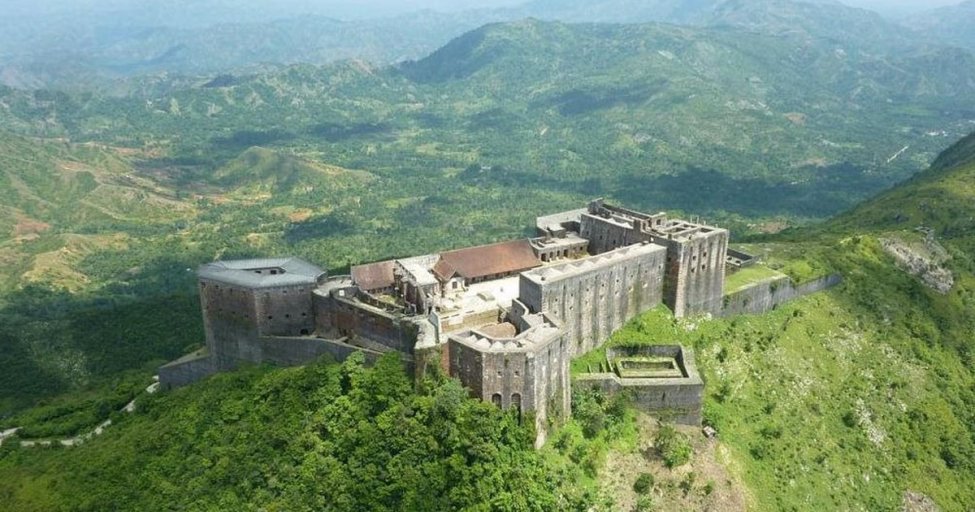 The massive stone structure was built by up to 20,000 workers between 1805 and 1820 as part of a system of fortifications designed to keep the newly independent nation of Haiti safe from French incursions. The Citadel was built several kilometres inland, and atop the 900 metres (3,000 ft) Bonnet a L’Eveque mountain, to deter attacks and to provide a lookout into the nearby valleys. Cap-Haïtien and the adjoining Atlantic Ocean are visible from the roof of the fortress. 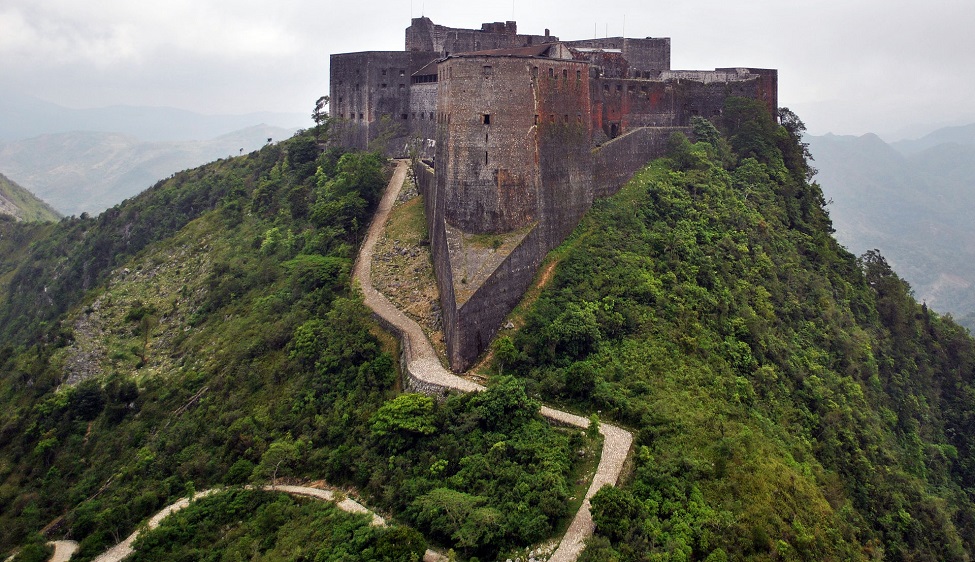 ​
Photographic images do not really do this monster of an architectural structure any justice. The colossal physical dimensions of the fortress have made it a Haitian national symbol, featured on currency, stamps, and tourist ministry posters. The fortress walls rise 40 metres (130 ft) from the mountaintop and the entire complex, including cannonball stocks but excluding the surrounding grounds, covers an area of 10,000 square metres (110,000 sq ft). 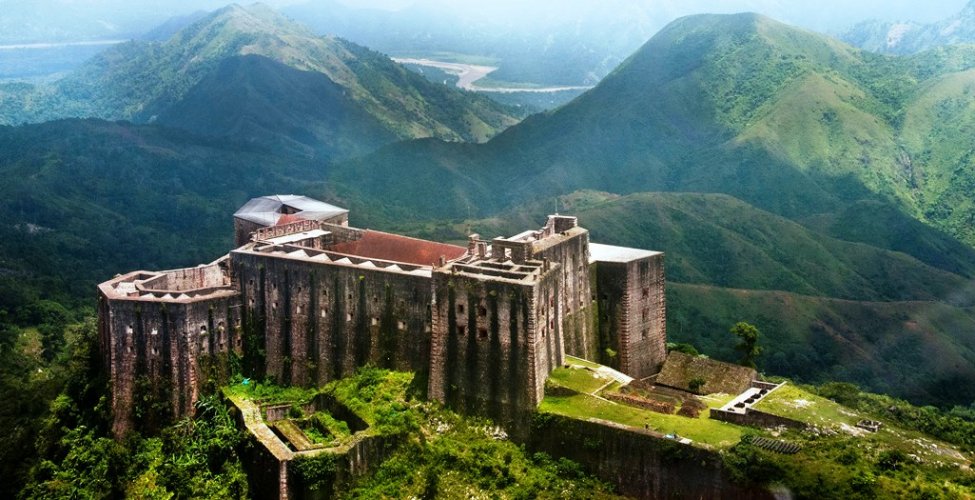 ​
The Haitians outfitted the fortress with 365 cannons of varying size. These were obtained from various nations, and still bear the crests of 18th Century monarchs. 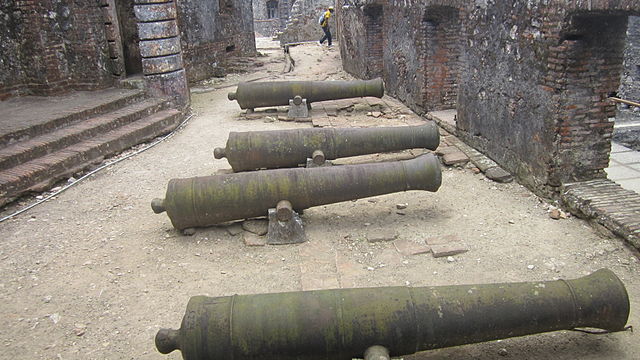 Source​
Enormous stockpiles of cannonballs still sit in pyramidal stacks at the base of the fortress walls. 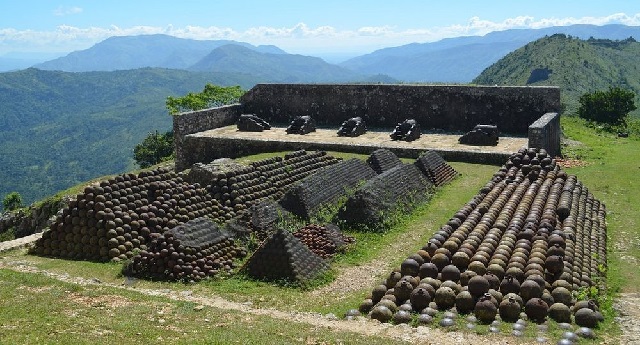 Since its construction, the fortress has withstood numerous earthquakes, though a French attack never came and it was eventually abandoned.


The Purpose​
Henri Christophe initially commissioned the fortress in 1805. At the time, Christophe was a general in the Haitian army (under Haiti's emperor, Jean-Jacques Dessalines) and chief administrator of the country's northern regions. The Citadel was part of a system of fortifications that included Fort Jacques and Fort Alexandre, built on the mountains overlooking Cap Haitien.

Dessalines ordered those forts built in 1805 to protect the new nation against French attacks. In the event of an invasion, Christophe planned to have his military burn the valuable crops and food stocks along the coast, then retreat to the fortress, setting ambushes along the sole mountain path leading to the Citadel.

Individuals​
This is for a separate related artcle, but there are three major Haitian individuals we will cover later. I think they are being presented as former slaves, and such. I want to offer a hypothesis that we are dealing with representatives of the destroyed civilization. It could probably be Moorish, but that is hard to prove. At the same time may be we could substantiate it with circumstantial evidence.


#1: Toussaint Louverture
...the Black Napoleon...​
Toussaint L'Ouverture or Toussaint Bréda, was a Haitian general and best-known leader of the Haitian Revolution. He was a leader of the growing resistance. His military and political acumen saved the gains of the first black insurrection in November 1791. He first fought for the Spanish against the French; then for France against Spain and Great Britain; and finally, he fought on behalf of Saint-Domingue in the era of Napoleonic France. He helped transform the slave insurgency into a revolutionary movement. 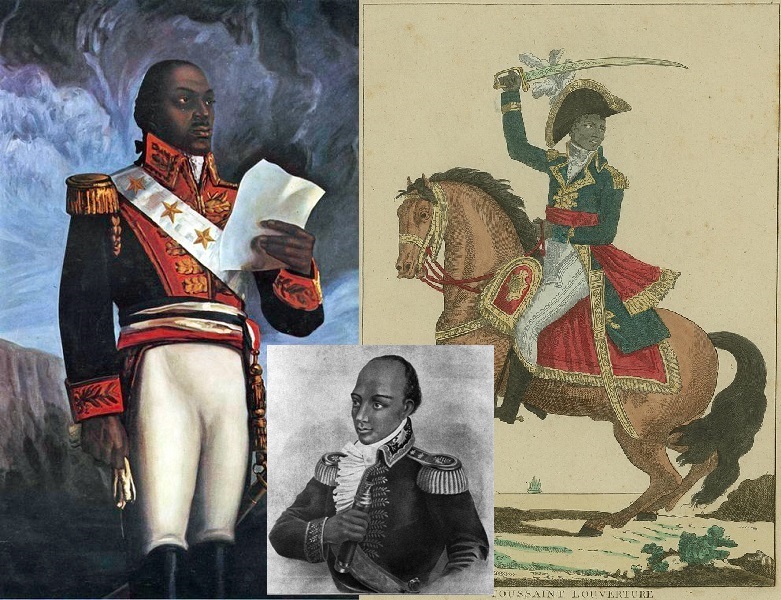 #2: Jean-Jacques Dessalines ​
Jean-Jacques Dessalines 20 September 1758 – 17 October 1806) was a leader of the Haitian Revolution and the first ruler of an independent Haiti under the 1805 constitution. He ordered the 1804 Haiti massacre of the remaining white population of native French people. Under Dessalines, Haiti became the first country in the Americas to permanently abolish slavery. Initially regarded as governor-general, Dessalines was later named Emperor Jacques I of Haiti (1804–1806) by the Generals of the Haitian Revolution Army. He is regarded as one of the founding fathers of Haiti. 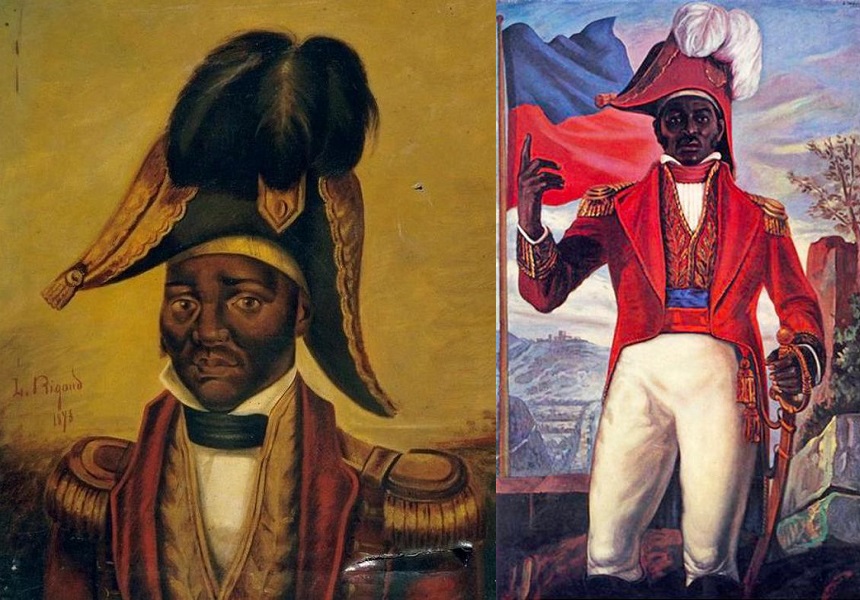 #3: Henri Christophe​
Henry Christophe was a key leader in the Haitian Revolution and the only monarch of the Kingdom of Haiti. Christophe was a former slave of Bambara ethnicity in West Africa, and perhaps of Igbo descent. Beginning with the Slave Uprising of 1791, he rose to power in the ranks of the Haitian revolutionary military. The revolution succeeded in gaining independence from France in 1804. In 1805 he took part under Jean-Jacques Dessalines in the capturing of Santo Domingo (now Dominican Republic), against French forces who acquired the colony from Spain in the Treaty of Basel. 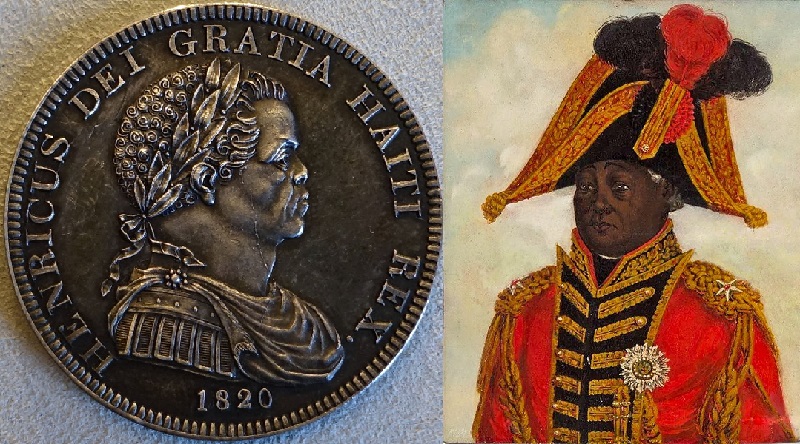 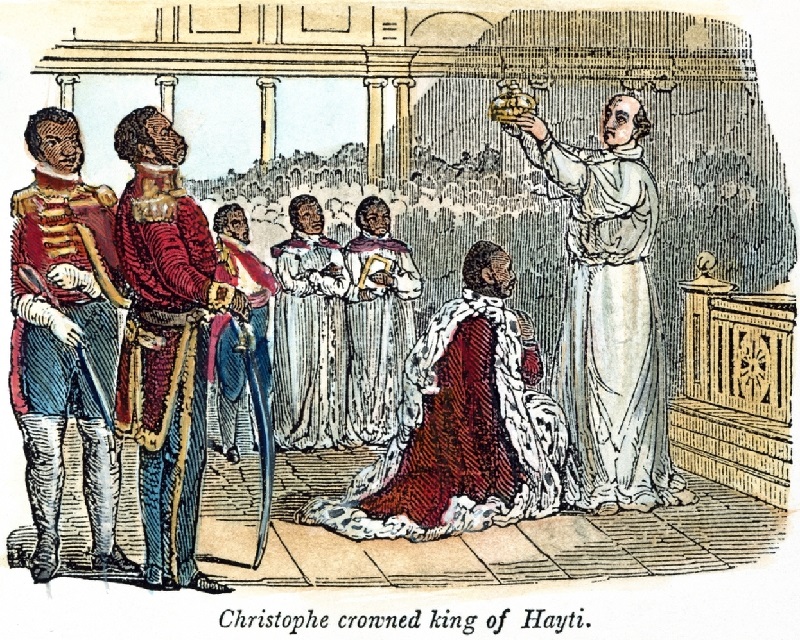 ​
The above three were slaves at some point. Well, at least this is what the narrative tells us. I think this fact is up for a debate. What if our Haitian slaves had nothing to do with Africa, and were simply local Moorish population?


Back to the Fortress​
We have this Citadelle Laferrière, and are to believe that 20,000 former slaves, directed by another slave, spent 15 years building the biggest fortress in all of the Americas, so that it could never be used for any meaningful purpose. I doubt that being depicted on a Haitian banknote justifies its existence.

Just about every source I've seen says that it was built by Henri Christophe, the future King of Haiti. Let's be real here and ask a few questions:

Another Structure: Sans-Souci Palace​
In addition to the above citadelle, Henri Cristophe is credited with building a few palaces. The Sans-Souci is a palace in Haiti located approximately 5 kilometres (3.1 mi) northeast of the Citadelle Laferrière. It was the royal residence of King Henri I (better known as Henri Christophe) of Haiti, Queen Marie-Louise and their two daughters. It was the most important of nine palaces built by the king, as well as fifteen châteaux, numerous forts, and sprawling summer homes on his twenty plantations. Construction of the palace started in 1810 and was completed in 1813. 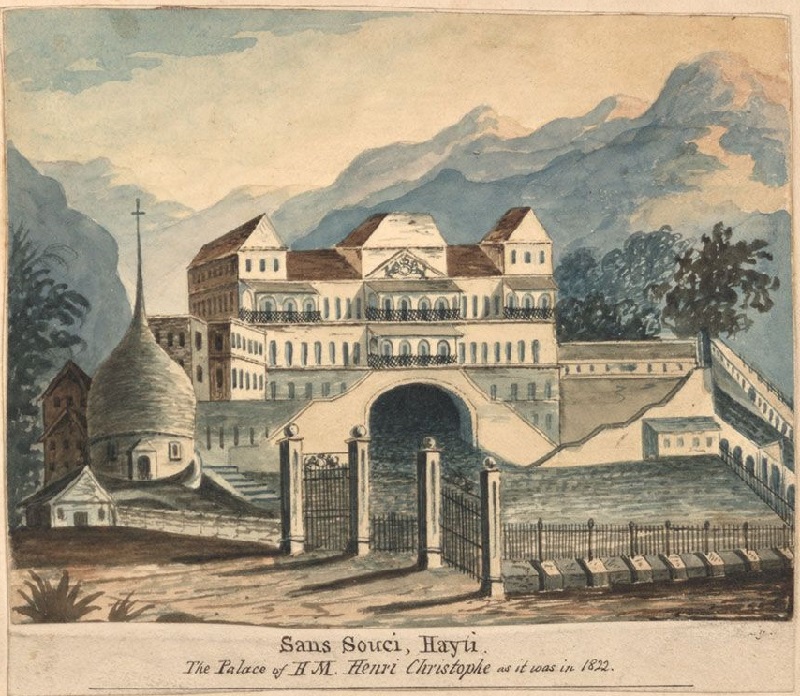 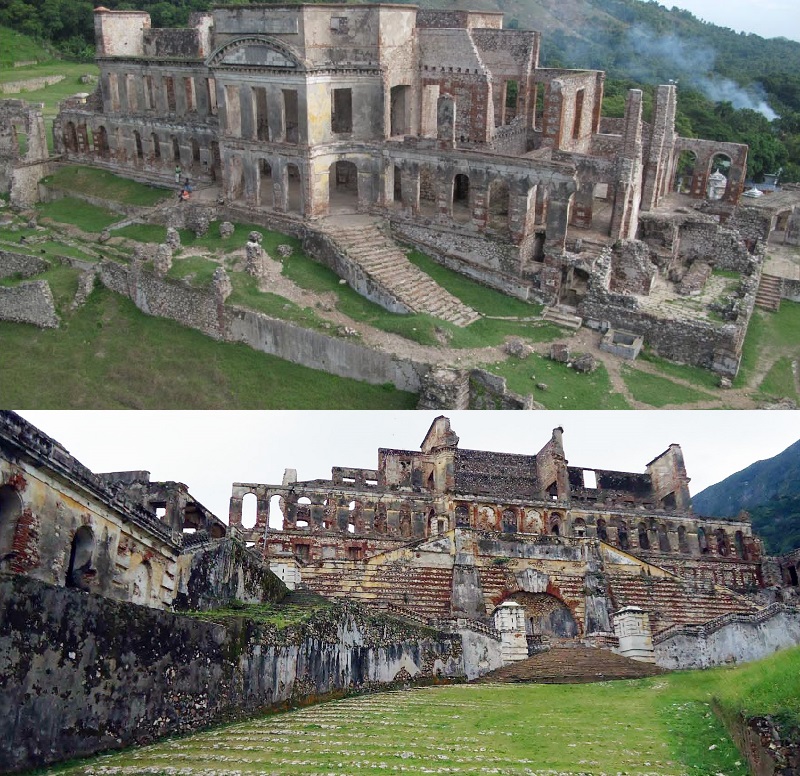 KD: I think we could be witnessing a set of altered historical facts here. Those who just got done chopping at sugar cane, re-purposed themselves into some outstanding architects and builders. Outstanding to the point, where our Citadelle Laferrière survived multiple earthquakes, and is still standing strong 200 years after its completion. 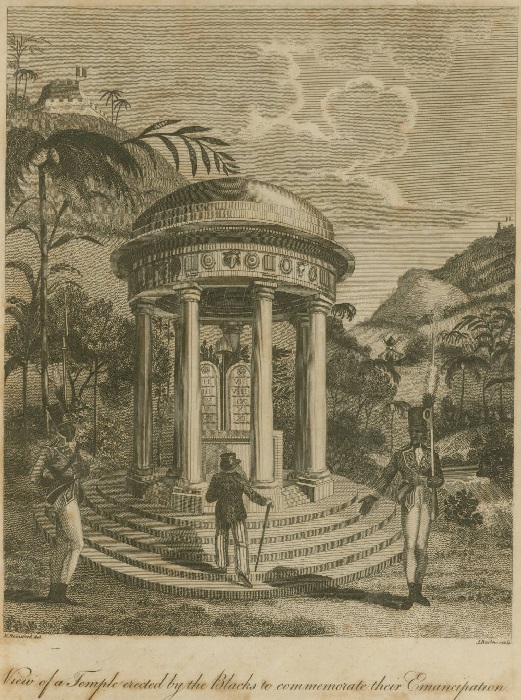 Source​
In this article I'm asking for your help with tracking down additional information pertaining to the constriction of the Laferrière fortress.
Click to expand...