Was somewhat bewildered by this 2 and 3 year San Francisco metamorphosis. If you remember, this unfortunate event happened on 04/18/1906, and below are the consequences.

SF in 1 Year: 1907​
San Francisco rising from ruins, April 18, 1907. View southeast from Nob Hill showing reconstruction progress. With ruins of Towne home ("Portals of the Past") in foreground. 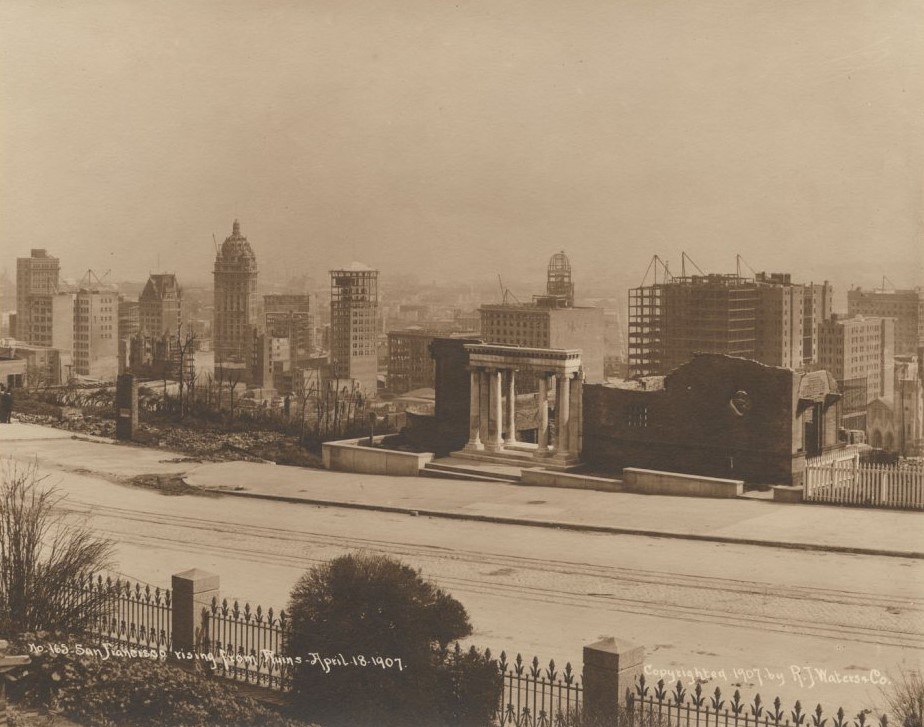 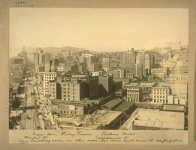 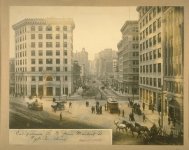 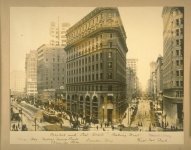 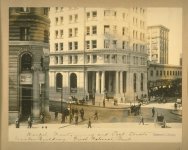 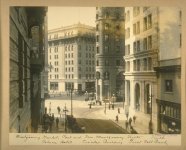 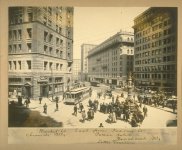 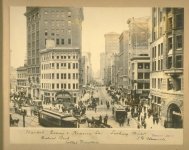 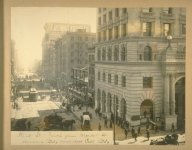 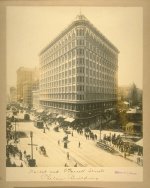 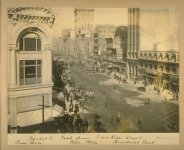 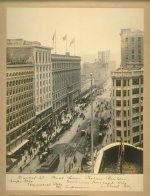 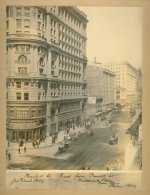 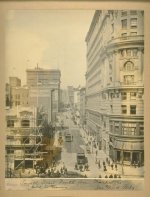 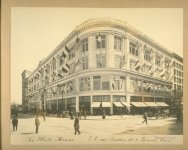 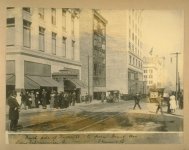 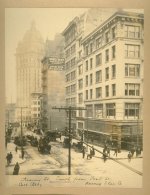 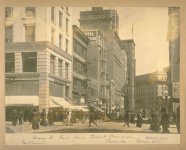 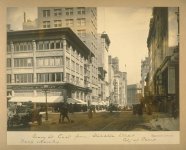 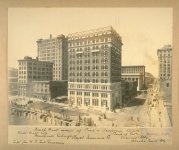 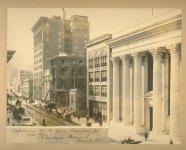 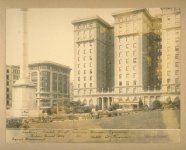 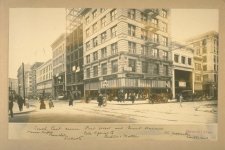 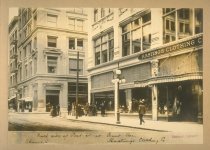 KD: As far as I understand, 1906, 1907, 1908 and 1909 conditions of San Francisco are officially dated. Hard to believe TPTB could lay an egg like this. Yet, it’s right here in our face. What kind of infrastructure did they have back then?

Considering that I probably do not comprehend things like I used to: Is this a normal "rebuild" speed?
Click to expand...

Right now I am watching this video titled -San Francisco after the devastating earthquake in 1906-
I thought I'd give it a try posting it here in case you haven't seen it. It is my first post, i hope it works.

I believe the video below is related. Makes one wonder how a video like that gets lost.

Additionally, I would like to know who cleaned up all the streets from the debris. I do not think I have ever seen a photograph where adequately street clearing efforts were present. It’s like all the streets are always debris free, no matter which post-fire or earthquake city we look at.
F

I have seen the whole video and noticed a few things.
At 11:50 min (and briefly at 3:06 min) the pavement seems to be at 1st floor level. Means the building collapsed below street level?
Everyone wearing a hat.
People in tents, people on the move with their belongings, people queuing, but they all seem well dressed, and well behaved.

After an earthquake I don't expect this:
Wooden poles and trees and beautiful lampposts still standing straight and some buildings in seemingly good shape, yet the all around it everything collapsed completely.
Some building that are still (partly) standing are completely see-through.
Trams operating, there is roads and tracks repair work being done. I have not spotted cracks in the streets which i would expect after an earthquake.

There is debris in the streets in this video, and people cleaning it up. But the amount of debris seems too little. As if it all collapsed vertically. Nothing tipped over.

Levels of devastation are ridiculous. Streets are cleared out.

Urban fires with random quakes followed by enthusiastic rebuilding activities are so hard to crack.
R

I think in the film clip above a notation stated that it was Taken May 1906, when the damage occurred in April. However, in older postcards pics, it looks like the amount of damage done was centered in residential areas and not in the center of the town (those buildings that were made to last - see attachments). I see the market street with the "bank" and "US Reserve Treasury" seen on cards at the top of this page managed to survive and thrive. I wonder if the insurance business was alive and well during this time period - to pick up the majority of fallen homes on pennies on the dollar. I especially liked the map that was linked in this website 1915 that does show the California and Van Hess Streets depicted in the postcards below - looks eery that the downtown looks fine. Not sure where the old City Hall Building was - on one of the postcards, it notes that the Cost of the City Hall building was $20 Million, Built in 20 years, and took only 20 Seconds to destroy. Makes you wonder, if any downtown building was truly "destroyed' and not re-finished in years after - if a complete building cost $20 Million and took 20 years to complete 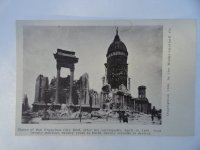 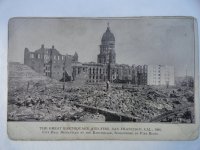 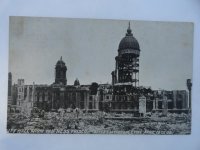 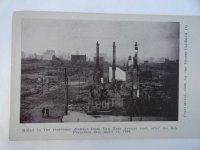 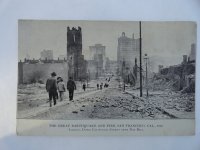 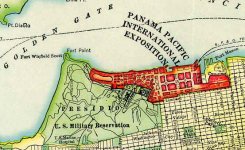 I have often thought that a lot of these city devastating fires could be somehow linked to the rise or to even bolster the need for the fire service as it is one of the services that benefited the most from such disasters with the implementation of fire codes, building regs backed up by lengthy acts/statues.
I find it highly suspicious that they would also be on hand with the trusty method of stopping the fire spreading by using dynamite.

Now in the grand scheme of things I have been referred to many times as a dumbass, but even I know that using dynamite to extinguish a fire is a pretty daft idea.

The city used explosives in an attempt to clear a path, but untrained crews instead helped spread the fire.

Well, that video is already gone. And I'm having a problem with my link to my discussion of Biograph:
So JonLevi posted this today. The relevant part is the first couple minutes:

Here's a link to the video he cites and the description:

This film shows the partial burning of a small-scale model of downtown San Francisco in an early attempt at simulating the 1906 disaster. The model is seen in aerial view from above the South-of-Market district, looking northwest toward Market Street and the downtown area. Russian Hill (left) and Telegraph Hill (right) are shown in a painted background. The Call Building at 3rd and Market streets is modelled at left center, and the Ferry Building (Market and East streets) is shown at right. Market Street and downtown have been greatly shortened between the two enlarged model building. In reality, the location of the initial fires was more widely scattered than is shown, with many more blazes beginning out of view, at left, and a few more north of the Ferry Building. Note the heavy puffs of smoke wafted in from the left, both to give the impression of a rapidly spreading conflagration and to put out the flames for the final "smoking ruins" view. In fact, every part of the city shown (except a few small pockets) burned over a three day period.
Click to expand...

It should come as no surprise that the production was the work of American Mutoscope and Biograph Company. Crude as this simulation may be, it comes nearly exactly a month after the alleged earthquake and fires. I can't help but wonder what someone could do with a little more time...

Edit: Sorry KD, my phone decided to jack this post all up. And by the time i got to the laptop, it appears you were trying to help already!
Last edited: Jul 11, 2021

Banta said:
The relevant part is the first couple minutes:
Click to expand...

Incredible... Ended up doing this:

KorbenDallas said:
I believe the video below is related. Makes one wonder how a video like that gets lost.

Additionally, I would like to know who cleaned up all the streets from the debris. I do not think I have ever seen a photograph where adequately street clearing efforts were present. It’s like all the streets are always debris free, no matter which post-fire or earthquake city we look at.
Click to expand...

Yes, and all those people seem like they don't care at all about what happened. Most of them are well dressed and walk the way they might stroll through a garden on any Sunday afternoon to relax. There are no injured or rescuers, there is no air of tragedy, no one shows curiosity for the devastated environment in which he finds himself. The atmosphere is completely surreal.
Where were all these people during the disaster? Why is nobody disheveled or dirty or seems to need help?
Outside of the rubble heaps, everything is in order. Looking at these restored videos, I have the feeling that the temporal order has been manipulated. What if this was the state of the cities we see deserted before and inhabited after a few decades? What if people were brought there immediately after the destruction or after the reconstruction?
However, it would remain to be understood from where all those people were brought there, who did the reconstruction and how.
I believe that the temporal order must be taken into consideration as a key element in order to understand
You must log in or register to reply here.
Similar articles