Once again we get into the mysterious 17th century and weird terrestrial alterations pertaining to our 1600s. Could things like that be related to this world being somewhat different during the antediluvian times? May be it could, but at this moment we do not know for sure. Hopefully, at some point, we are able to figure this stuff out, but for right now, we have what we have. In this case we have this little story about a city, and a lake which vanished with no trace.


Lake Parime and Manoa City​
Lake Parime is a legendary lake located in South America. It was reputedly the location of the fabled city of El Dorado, also known as Manoa, much sought-after by European explorers. Repeated attempts to find the lake failed to confirm its existence, and it was dismissed as a myth along with the city. The search for Lake Parime led explorers to map the rivers and other features of southern Venezuela, northern Brazil, and southwestern Guyana before the lake's existence was definitively disproved in the early 19th century. Some explorers proposed that the seasonal flooding of the Rupununi savannah may have been misidentified as a lake. Recent geological investigations suggest that a lake may have existed in northern Brazil, but that it dried up some time in the 18th century. Both "Manoa" and "Parime" are believed to mean "big lake". 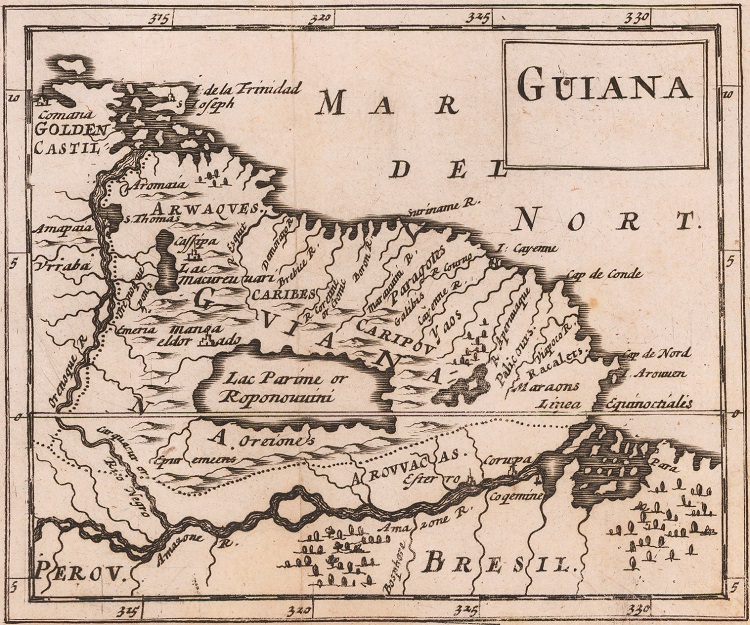 ​
Essentially, the story goes like this. Allegedly, there was this Lake Parime in the North-Eastern quarter of South America. It was well mapped, and apparently quite nicely measured. Personally, I would like to know where the depth information is coming from
I did say "mapped" above, for this is what it looks like. Yet, the narrative dictates the following:
As a result of Raleigh's work, maps began to appear depicting El Dorado and Lake Parime. One of the first was the elder Jodocus Hondius' Nieuwe Caerte van het Wonderbaer ende Goudrycke Landt Guiana, which was published in 1598. Hondius' map depicts an elongated Lake Parime south of the Orinoco River, with the majority of the lake positioned south of the equator, and with Manoa on the northern shore, towards the eastern half of the lake. Manoa is noted as "the greatest city in the entire world". Hondius' map was subsequently copied by Theodore de Bry and published in his popular Grands Voyages in 1599. When Hondius published a completely revised edition of Mercator's Atlas in 1608, it included a map of South America featuring Lake Parime with the majority of the lake located south of the equator, and with Manoa again along the northern shore, although not quite so far east.
KD: Basically, above we have nothing but copy and pastes from the related Wikipedia page.

Related Maps​
Let us see what maps related to this City of Manoa, and Lake Parime we have. Surprisingly there were quite a few produced, which, by itself, is bizarre. Well, I think it's bizarre, for it falls into those cartographic fantasies territory I choose not to trust.

These are just a few. There are many more out there, but I think this is plenty to start working with:
From these older maps we can see that this Lake Parime is sitting on the Equator. The Amazon River is located to the South, Orinoco River to the North, and Rio Negro to the West.

Personally I find the below map to be the most interesting one, but I am unable to find an unfolded version. Interesting, that for 1550s, this map has one too many cities mentioned. 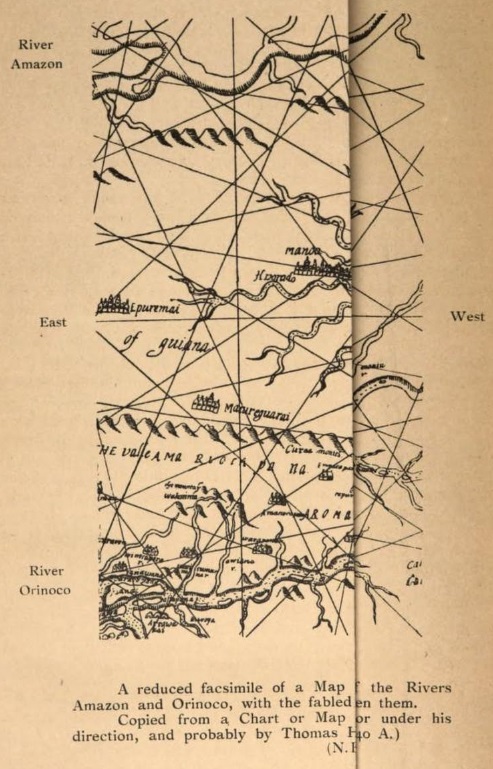 The City of Manoa​
This is highly questionable that this City of Manoa looked anything like what we can see in the image below, but the mere fact that we have this depiction should be noteworthy. 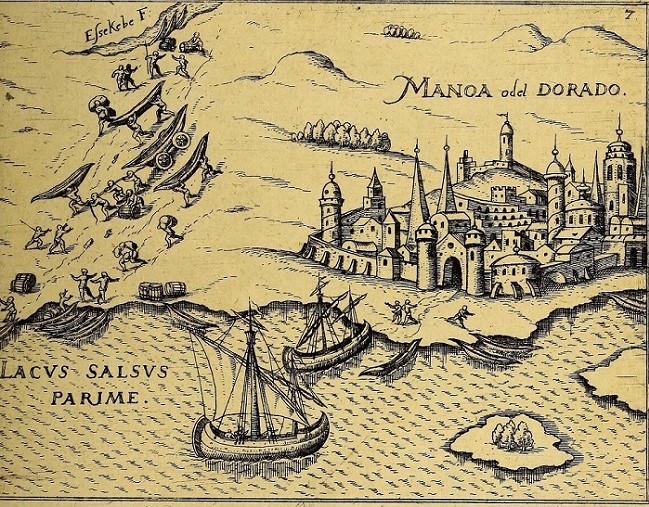 Juan or Johannes Martines/z​
Juan could as well mean Johannes, but search engines do not see it that way, therefore this difference could be important for a researcher. Anyways, Mr. Martines was allegedly the first one to end up in this Manoa City. Following the genre, he ended up in the city blindfolded. 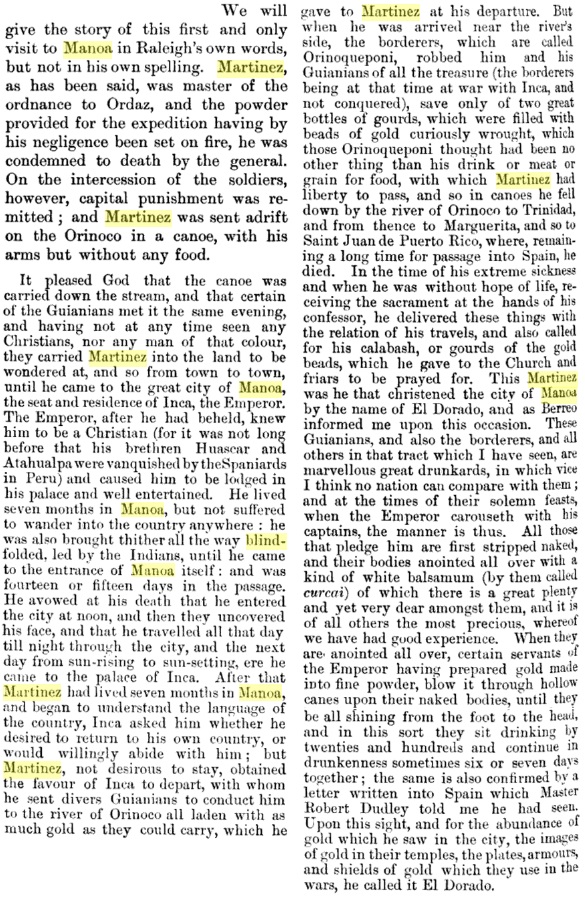 Inconsistencies​
It's easy to notice, that some of the maps place this Manoa City on the West side of the lake, while other maps place it on the North side. It's hard to say what the reason for this discrepancy could be. If you have any suggestions, please share. 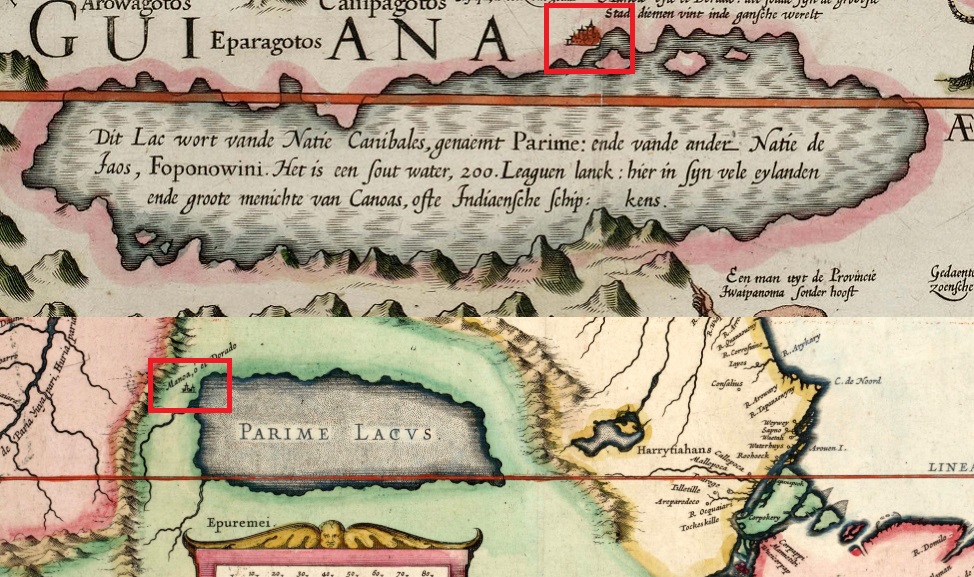 In the Books​
To be honest, there is a butt load of 17th/18th century information on this Manoa City, and the Lake Parime in Google Books. Below are a few cut outs for the interested ones. Interesting that European type cities are being mentioned. 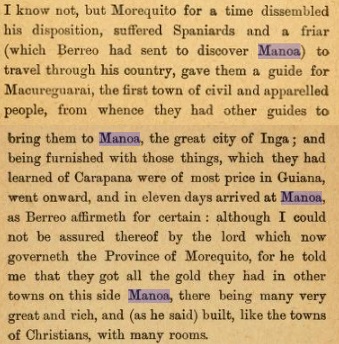 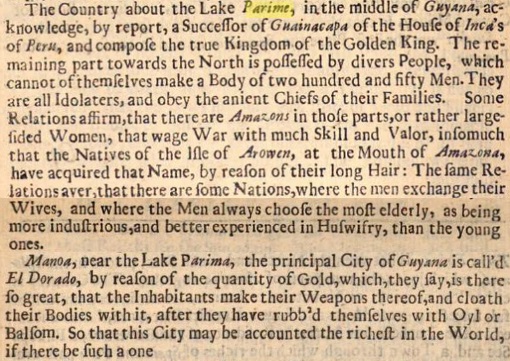 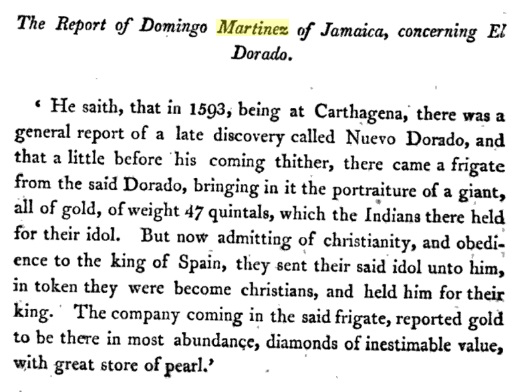 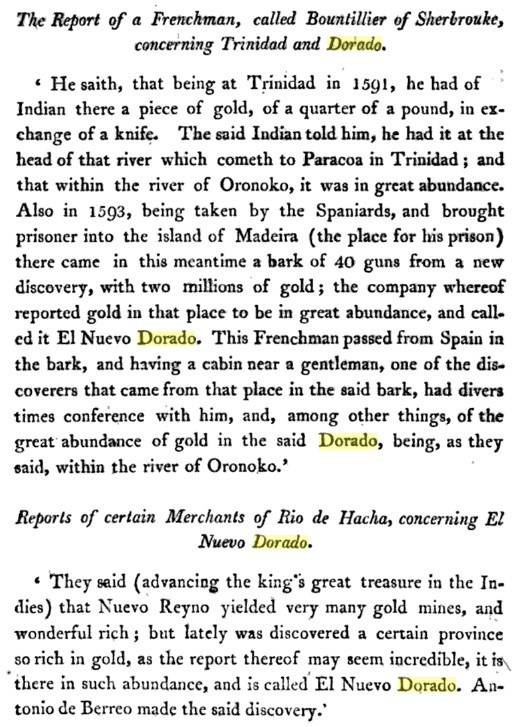 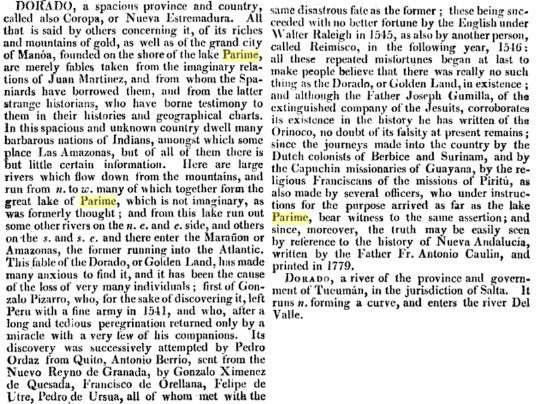 The Location​
How do lakes and cities disappear from the maps? Probably the exact same way they happen to pop up on the same maps but in different locations. We are being told that it takes a very, very, very long time for lakes, mountains, or whatever else to form. We are talking about hundreds of thousands, or millions of years here. Yet our maps present a totally different picture, where it takes way less. These same very maps make us question the natural character of these geographical changes.

So, where did this Lake Parime go? Let us take a look at the today's map and compare it with what we had in the 17th century. 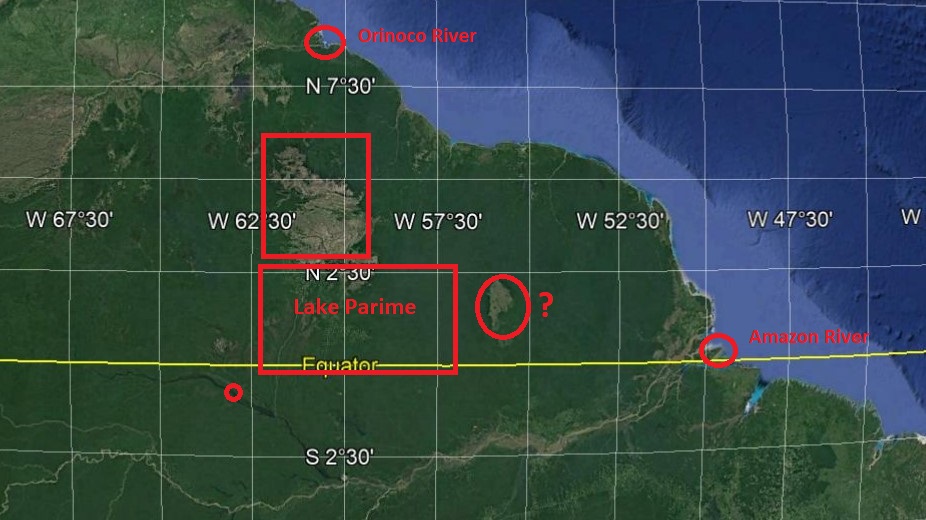 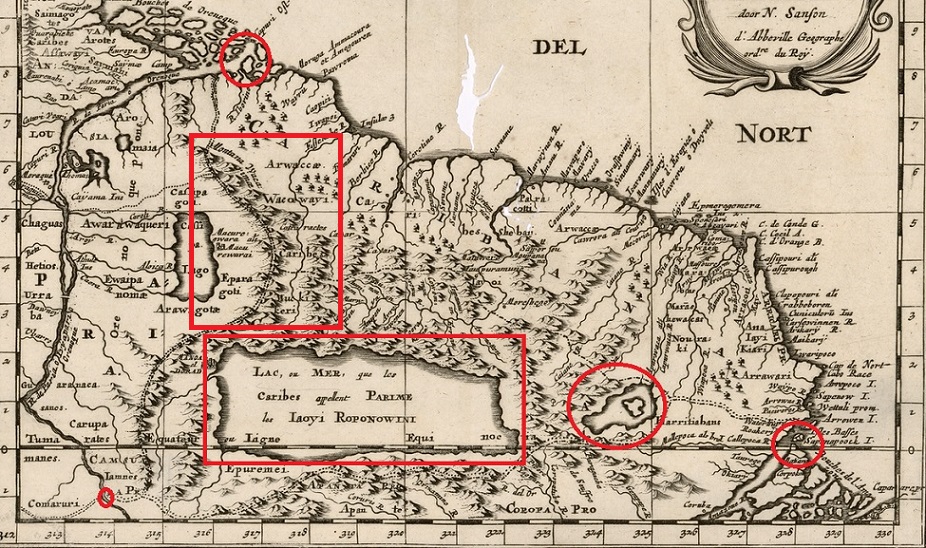 Well, where did the lake, and the city go?


Hybrids to blame?​
I am not sure if this creature here qualifies as a hybrid, but it sure looks very different from what a common human should look like. I think if we follow this logic here:
... we could guess where all the cities in the area, as well as the lake went to. This 1650s +/- time span spared no weird creatures, or so it seems. 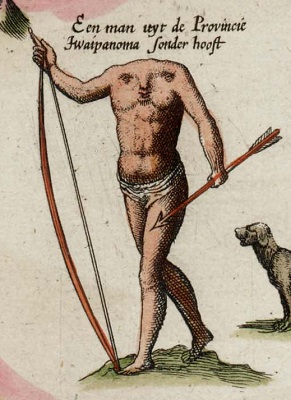 Source​
Here is what Wikipedia has to say bout this bizarre headless creature:
So we appear to have both, EPIPHAGI and the "eyes on the chest" one. 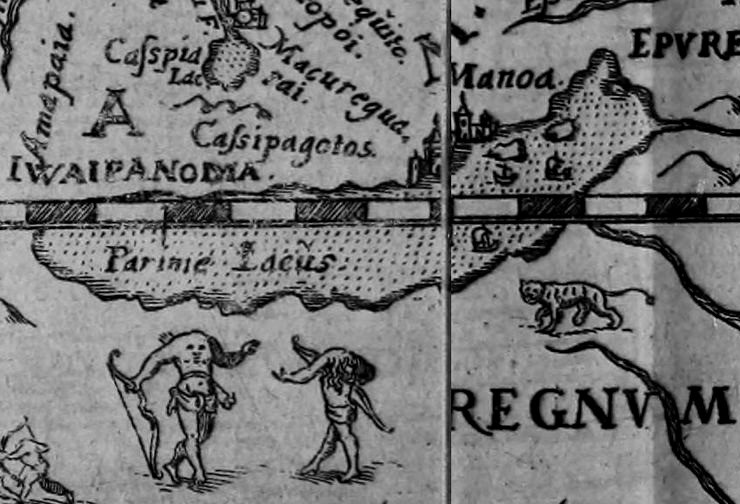 Can't help it: Check our "ancient" Alexander the Great out, and say that he does not look like a medieval knight in this 1445 depiction below. 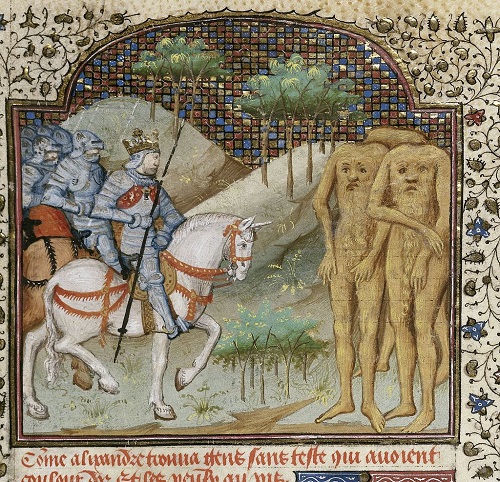 RA-RA-RA-RA​
In the process noticed, that the area in question has pretty interesting locality names. Those little coincidences are always bizarre, but they play into the totality of circumstances. Here is a few:

Roraima Today​
Roraima is the northernmost and least populated state of Brazil, located in the Amazon region. It borders the states of Amazonas and Pará, and the countries of Venezuela and Guyana. The population is approximately 450,000 (2010) and the capital is Boa Vista. Roraima is the Brazilian state with the fewest municipalities, 15 in total. 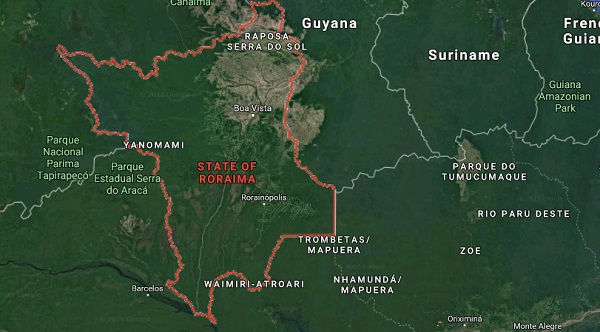 ​
I don't know about you, but I get this feeling that our wonderful City of Gold Manoa, together with Lake Parime were annihilated by some powerful forces some other places on the other side of the Atlantic Ocean head a pleasure of experiencing. Here is what the general vicinity of this area incorporates. Pretty sure the narrative considers these things below to be natural. Yet, it appears that whatever did this to them rocks, had to also kill all the fish together with the lake, to include every single city in the area. 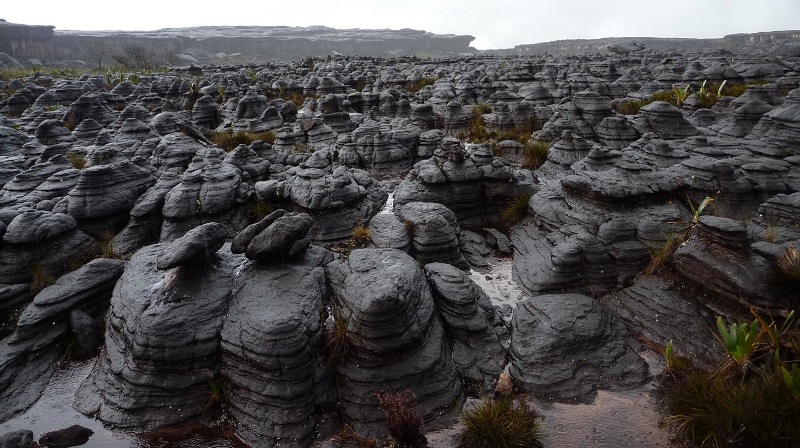 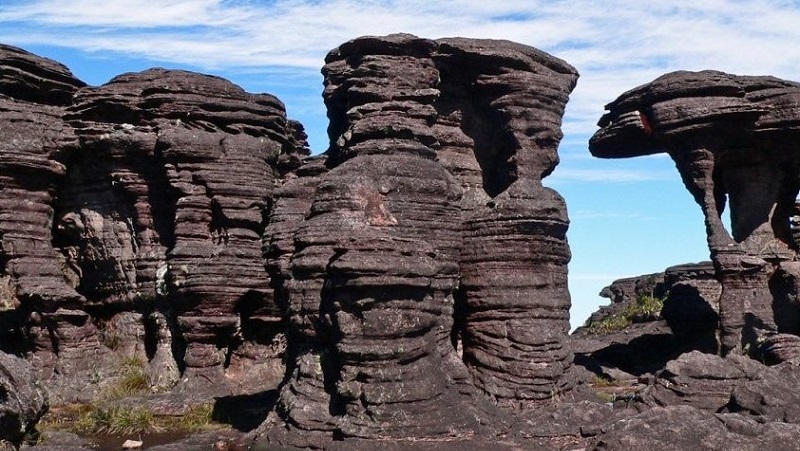 Mount Roraima​
This nicely looking terrain feature is situated a couple hundred miles north from our Lake Parime. You can read the generic stuff about this mountain on the wiki page: 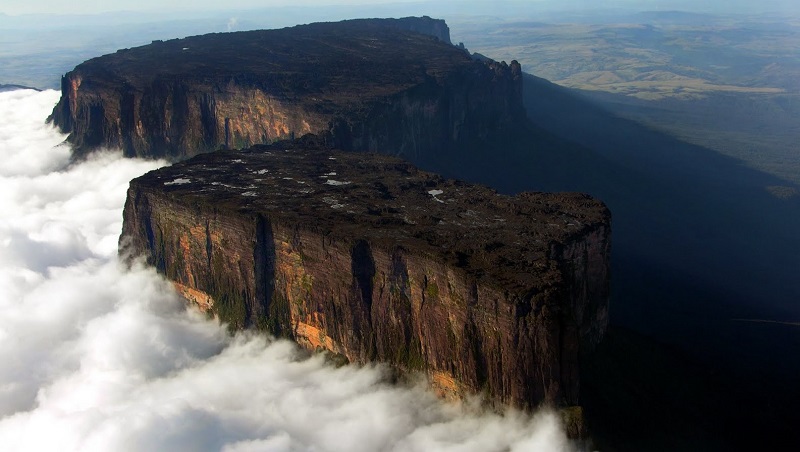 Here is what a different Wikipedia article has to add:

KD: Sounds like it's fairly safe to say, that this Manoa El Dorado is not there any more. 17th century was pretty vicious in its judgement...
Click to expand...