AMERICA in ASIA?​
This map makes very little sense when viewed from the traditionally dogmatic point of view. As a matter of fact it makes no sense at all. There would have to be some drastic developments in the history of this world for this map to make sense. Why do we even have a map like this? Why do we have America in Asia, and Scythia in Europe?

Antique hand colored map, from Anthony Finley's "A New General Atlas, Comprising a Complete Set of Maps, representing Grand Divisions of the Globe, Together with the Several Empires, Kingdoms, and States in the World; Compiled from the Best Authorities, and corrected by the Most Recent Discoveries", 1827. From the section : "Atlas Classica; or Select Maps of Ancient Geography, both Sacred and Profane" 1827.


State of Nations at the Christian Era
1827 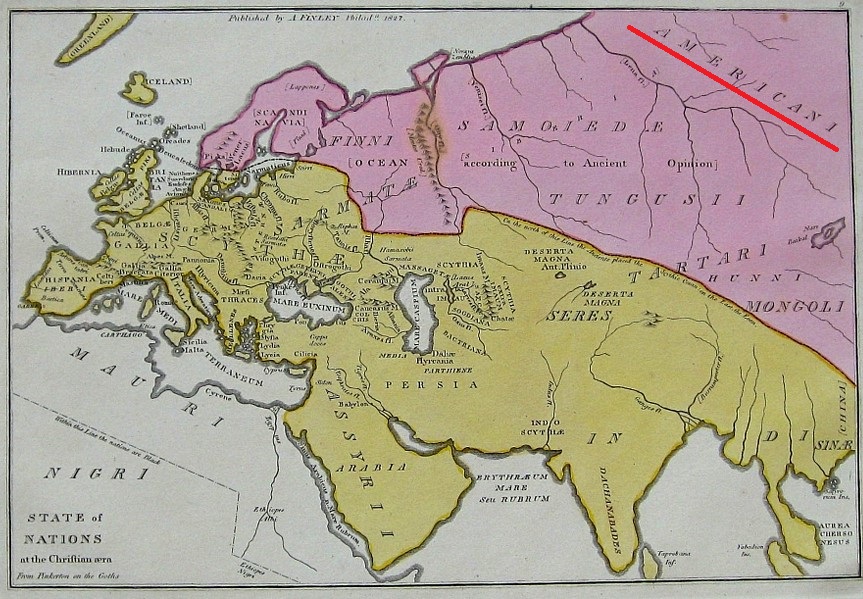 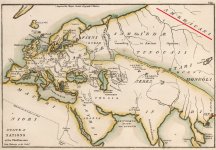 ​
Map Source: State of Nations at the Christian aera From Pinkerton on the Goths

In the 1820's, Anthony Finley produced a series of fine atlases in the then leading American cartographic center, Philadelphia. Finley's work is a good example of the quality that American publishers were beginning to obtain. Each map is elegantly presented, with crisp and clear engraving and very attractive pastel hand shading. Topographical and political information is copious, including counties, towns, rivers, and roads. This 1820s was a period of significant development in the eastern United States, with great growth of population, expansion of the transportation nexus, and political changes. As Finley was very concerned to depict as up-to-date detail as was possible, his maps show this development in a graphic and most informative manner. Finley's maps present an accurate and fascinating picture of the United States in the early decades of the nineteenth century. This is an excellent series of maps from the nascent American cartographic world.

Note: I was unable to find a Wikipedia page dedicated to this Anthony Finley cartographer. There was one in Wikimedia with a bunch of maps on there. Makes you wonder why?...

KD: Why would we have this 1827 map so seriously messed up, or is there something we do not now?

We could probably blame John Pinkerton for the weirdness of this map, but he died impoverished. This particular feature has become somewhat of a red flag, as far as historical tool-people go.
Click to expand...