As the airships sailed along
they smashed up the city. 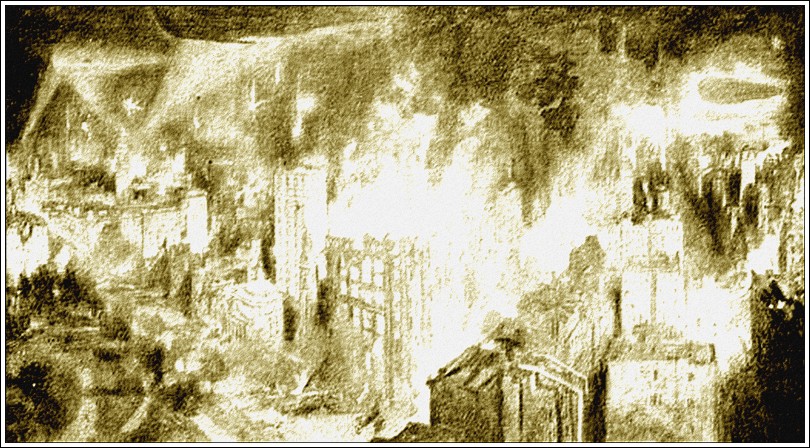 The War in the Air, a military science fiction novel by H. G. Wells, written in four months in 1907 and serialised and published in 1908 in The Pall Mall Magazine, is like many of Wells's works notable for its prophetic ideas, images, and concepts - in this case, the use of the aircraft for the purpose of warfare and the coming of World War I. The novel's hero is Bert Smallways, a "forward-thinking young man" and a "kind of bicycle engineer of the let's-'ave-a-look-at-it and enamel-chipping variety. 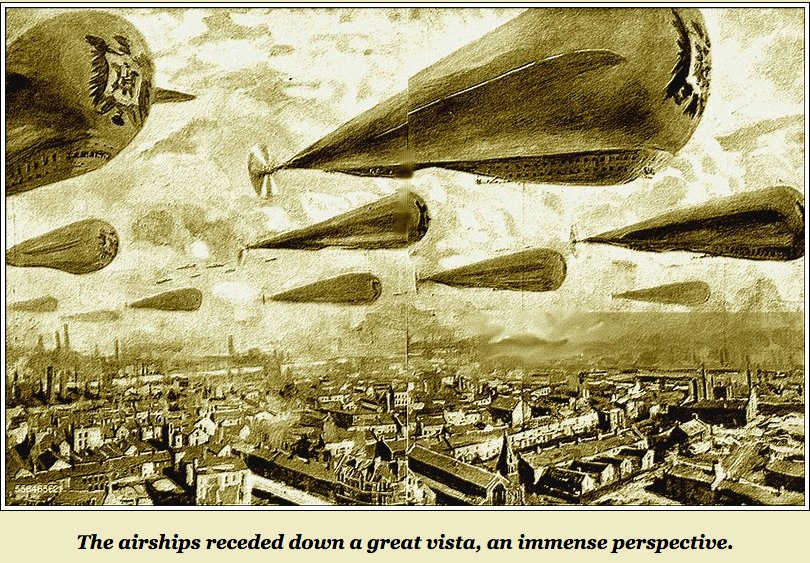 Slowly, broadly, invincibly, there grew upon Bert’s mind realisation of the immense tragedy of humanity into which his life was flowing; the appalling and universal nature of the epoch that had arrived; the conception of an end to security and order and habit. The whole world was at war and it could not get back to peace, it might never recover peace. (Chapter Ten, The War in the Air)

Here is an interesting image from the same book: Creative use of them Eiffel Towers, huh? 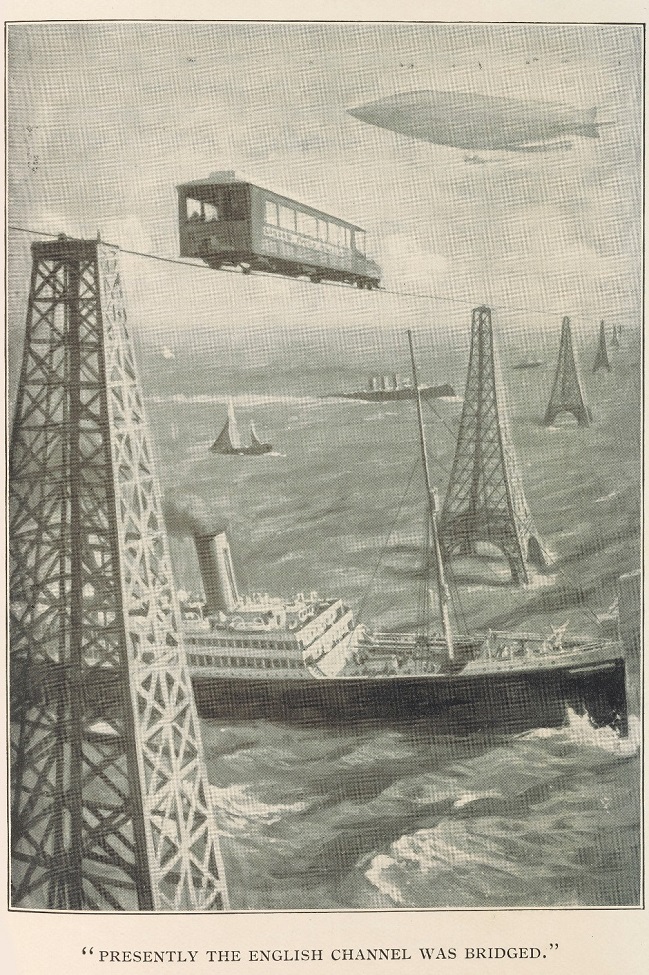 Source​
The War In The Air is often referenced because in it Wells so accurately anticipated lots of details of aerial warfare – dogfights, bombing raids, even what the earth looks like from up in the air – none of which existed or were possible when he wrote the book in 1907 and when the most primitive flying machines had only just been invented. 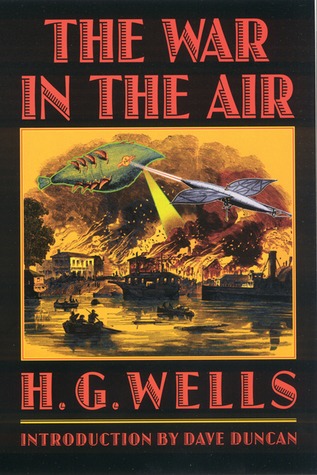 KD
"I can’t tell you exactly what year it is because we honestly don’t know." - Morpheus
L

If you believe what is said about The Round Table then maybe its a possibility that HG Wells was a front man for Cecil Rhodes. I guess its not to hard to believe after reading his two books
Titled, Shape of Things to Come, and the New World Order.

Mainstream Science Fiction it seems is just a predictive programming tool. They are just too precise in their imagination. There is Clarke with Satellites (even geostationary satellites, probably because they are ground based), verne with space flight and the moon in the 19th century, and countless modern movies pushing transhumanism.

HG Wells invented the atomic bomb. It’s official inventor credited his idea from one of his books. He called it a uranium grenade that would explode indefinitely in The Shape of Things to Come.

Yup. H.G. Wells, the 'prophet' of the One World Order. (Thanks for the links KorbenDallas and LEGO_Fictions).

I've been searching to find how these entities/psychopaths work and finally figured it out. After reading Theresa Talea's book, "Eternal Humans and the Finite gods" (3rd edition), everything just fits together. The thing about religion is that it is ruled by nefarious entities and therefore those who participate in it, especially blindly, will be continuously persecuted, because the entities behind it, hate Humanity. There is no doubt to me there are many Humans attached to the 'New World Order' or the One World Order entities, and are used as their prophets, who in turn, to keep hidden, relay their messages to people like HG Wells, who in turn, tell the population of their plans. You can call it the twisted illuminati since they aren't so illuminated, and in fact that illumination jargon is just a lie to hide their true criminal actions.

I found a story the other day which describes how those criminal entities work through religion to get their dyed in the wool worshippers to do their nefarious deeds, or to spread their lies as far and wide as they can in order to generate fear in people, which they love to do as, it feeds them. This Dumitru Duduman character, it says of him:

"The Writings of Dumitru Duduman"
"In 1984, after years of intense persecution, Dumitru Duduman, a Romanian Pastor and the founder of the "Hand of Help" orphanage, was thrown out of his country for smuggling Bibles into Romania and Russia. With the help of the American Consulate, Dumitru and his family came to America. Feeling abandoned and discouraged, Dumitru asked 'god' why he had brought him to America. 'god' began to show Dumitru that he was brought to America to deliver a warning about impending judgment upon the country. Hand of Help would like to offer the 'Body of Christ' (Cannibalism?) the writings of Dumitru Duduman as a message of 'hope' to all those who will stop sinning and turn to 'god.' "

The so-called 'god' in the man's writings sounds much like Luciferian or Anunnaki YHWH characters who have an agenda against Humanity. And in his writings of "Dreams and Visions" the 'god' character shows to be very deceptive and hateful toward America. They have to put on an act otherwise people are going to recognize them for what they are, fallen entities. It's exactly what that HG Wells fiction book up top reminds me of. Their plans to destroy, however best they can. Same principles used with HG Wells as with this Dumitru Duduman character. They want to burn down California. This was back in 87, 88. I remember the time was when that other character Nostradamus projected there would be a large earthquake in California in this time period. I remember distinctly because at that time, the person I was dating said he was going on a trip to California and was frightened because of that Nostradamus prediction. I realized that it could be dangerous to let that go, so I willed within myself that it would not occur, besides, I had unfinished business, I thought, and still needed myself to go visit there, to see whether something I had known within me, would show itself to me while there. I never made it there, but, the point is, the earthquake never occurred, and California did not burn. So those creatures that call themselves 'god' in the writings of Dumitru, were wrong. Their predictions to Dumitru did not turn out. So what do you think they do? To save face, and keep the power over him and others, they lie about it, and repeat sayings from the 'bible' that upholds them in their farce.

It's the exact same thing that Theresa Talea and her mother (ex-prophetess) dealt with, when involved with these fallen entities, who not only channel messages, but take over the body of the person if they can. They never tell the truth. They try to pull the wool over people's eyes to get them to 'believe' what they say, so that the incident they want accomplished, will be created by the Humans. But one has to learn to fight against their messages. To extract themselves from dwelling upon their lies.

So...here's an excerpt of what Theresa Talea says in her book in chapter 7, Revealing the 'gods': One World Order Agenda:

"The "New World Order" is a catch phrase sometimes said by world leaders, but it actually designates a One World Order (OWO). For many thousands of years, three dominant OWO agendas have competed against each other to selfishly gain Earth and ultimately Milky Way energy-matter. One plan was directed by the Drakonian-Reptilian-Red Dragons to siphon the quanta toward Wesadrak. Another plan was led by Anunnaki Elohim-Green Dragons to direct the quanta toward Wesadek. Third, the Green Dragons split into a Luciferian agenda directed toward Phantom Milky Way.
The higher dimensional Seraphims won their wars against the Jehovian Anu races and gained leverage in their plan. Additionally, Thetans helped influence the result toward Wesadrak. Some Anunnaki-Green Dragons accepted this result, so they joined their previous enemies and together formed the United Intruder Resistance (UIR) in 2000 A.D. because of their mutual hatred of the Krysthal River Host races. Other Anunnaki-Green Dragons went back to Wesadek or sought amnesty with the MCEO-GA, which likely will have them stay in the Milky Way and on Earth because they do not want to be sucked into Wesadrak from the Phantom Milky Way if Red Dragons succeed in their plan."

Another thing I want to mention. They like to use the symbol of the "hand" a lot. The Jesuits used the little cartoon of a hand in many of their little doodlings through the ancient (or not so ancient) parchment artistic picturesque books. Then there's this author I bought a book from a few years ago, Gustav Meyrink, The Angel of the West Window, who uses that word a lot, and I'm not sure if it's in this book that he talks of "the Hand" and "a chain" a lot, or if it was another of his books that I read after I read the West Window book. What I figured the 'hand' was, was someone like HG Wells, if you know what I mean...and that 'chain'? same idea.

There's also a lot of interesting information about the seances of the 1800s. One book which I read, and forgot the name of and can't find it in my PDF library, tells about a family of young mediums who were able to bring out ectoplasm which formed into the shape of a human being, and the person studying this family, found that the only part of the body that actually manifested was the hands, and they were cold. The rest of the body was like vapour or fog, in other words, ghostly. If I find where I read that book, I'll remember to come and paste the title in here.

LEGO_Fictions said:
If you believe what is said about The Round Table then maybe its a possibility that HG Wells was a front man for Cecil Rhodes. I guess its not to hard to believe after reading his two books
Titled, Shape of Things to Come, and the New World Order.

Mainstream Science Fiction it seems is just a predictive programming tool. They are just too precise in their imagination. There is Clarke with Satellites (even geostationary satellites, probably because they are ground based), verne with space flight and the moon in the 19th century, and countless modern movies pushing transhumanism.

HG Wells invented the atomic bomb. It’s official inventor credited his idea from one of his books. He called it a uranium grenade that would explode indefinitely in The Shape of Things to Come.
Click to expand...

More likely it is indoctrination with severe BS rather than predictive control. So far there is no evidence of anything related to the explanations of the nature, shape and location of the place we live in, unless we blindly believe the considerable bullshit being sold by NASA and Darwinism.

"If you believe it, then it is true" or as Napoleon Hill put it "whatever you can conceive and believe, you can achive" not necessarily in a conscious or positive way.

There is widespread ignorance of what the mind is and how it works. The ignorance that unfortunately does not affect the ruling elite, this is the only advantage they have over the masses, but it is the only necessary one. It is the knowledge of who human beings are.
Last edited: Dec 25, 2021
You must log in or register to reply here.
Similar articles