Per Encyclopedia.COM, the narrative compliant history of the Hollow Blocks sounds like this:

Yet, it does appear that the hollow block design was developed no later than 1863. At least per the below publication we get the following info pertaining to 1863, and obviously 1868: 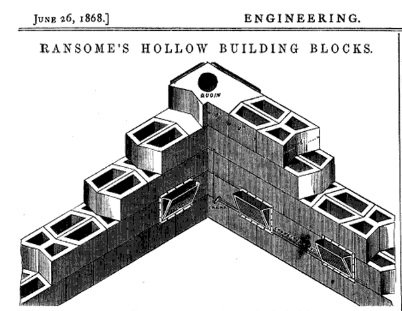 1868 Source
​
The accompanying engraving illustrates a somewhat novel method of constructing the outside walls of buildings, and which would appear to be particularly applicable to hot climates, such as India, on account of the peculiar facilities which it presents for ventilating the interior, and drawing off the vitiated air without the aid of any mechanical intervention, beyond such as may be necessary in order to regulate the amount of current that it may be desirable to maintain.
No claim of novelty attaches to the peculiar kind of bond which it is here proposed to adopt, and which consists of headers and stretchers, of peculiar form, so arranged that they actually key, and bind themselves together, and, consequently, requiring only so much cement to set them as will suffice to render their joints air-tight.
These blocks, from their uniformity and accuracy, could be set with great rapidity; they could be made of any size, suitable to the designs of the architect. Blocks, of the size shown in the drawing, are equal in cubic contents to fifteen standard bricks, and in all probability they would not take longer in setting, if so long. Presuming, then, that the first cost of production would not be excessive, that plastering and other finishing would be saved, whilst at the same time a simple and effective mode of ventilation would be introduced, this mode of construction, taken as a whole, recommends itself to notice, on the score of its own merits, and, as we have before stated, it would appear especially applicable for India or other tropical climates.
Click to expand...