A variable-pitch propeller or controllable-pitch propeller (CPP) is a type of propeller with blades that can be rotated around their long axis to change the blade pitch. A VPP can be efficient for the full range of rotational speeds and load conditions, since its pitch will be varied to absorb the maximum power that the engine is capable of producing. When fully loaded, a vessel obviously needs more propulsion power than when empty. By varying the propeller blades to the optimal pitch, higher efficiency can be obtained, thus saving fuel. A vessel with a VPP can accelerate faster from a standstill, and can decelerate much more effectively, making stopping quicker and safer. A CPP can also improve vessel maneuverability by directing a stronger flow of water onto the rudder.

The variable-pitch propeller has significant advantages over the fixed-pitch variety, which include:

A similar VPP screw appears to have been used to propel our famous SS Great Eastern a.k.a. Leviathan in 1850s. 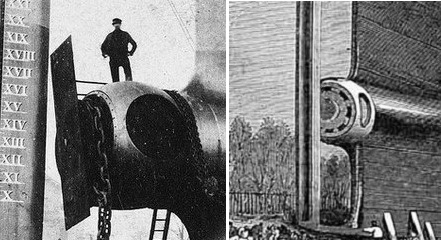 Source​
As far as I understand, the Variable Pitch Screw Propeller was not yet invented in 1858.

I was unable to find any official marine VPP inventor information on the internet. Additionally, there appears to be no single individual the invention of the Boat VPP is attributed to. The only info I was able to find pertains to the aircraft VPP.

You can imagine my surprise when I came across this little article in the 1855 issue of Mechanic's Magazine. 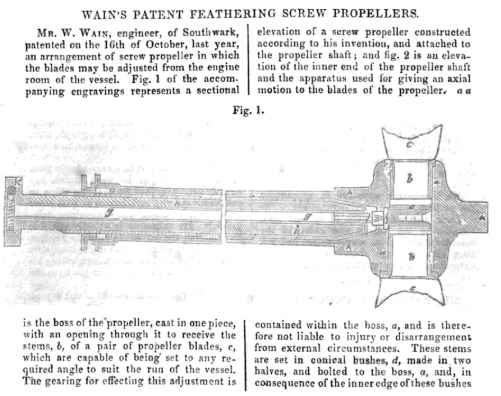 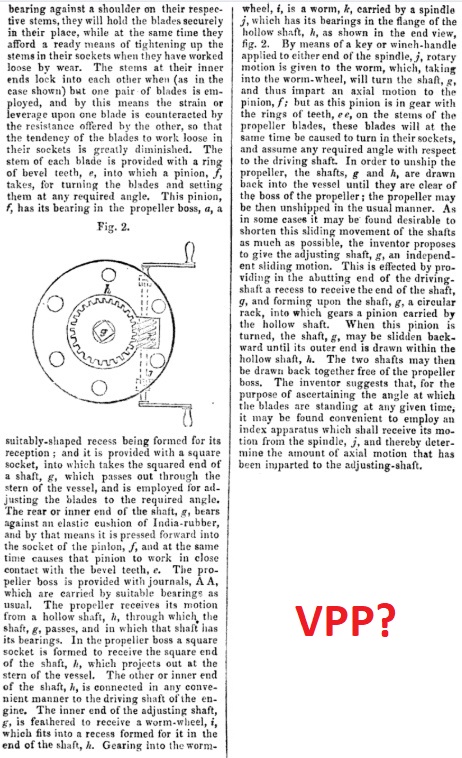 KD: I did mean patented, and not invented, for the pub does not say that he invented it. To be honest even if it did, I would still think that it was invented by somebody else, and at a different time.
Additionally: After scrolling through these pubs, I have no idea why 60 years later horses were still the main mode of transportation. Funny how everyone, and their brother were filing patents day in and day out. R&D was probably happening in their heads only.