Seattle regrading or unearthing? Which one was it?

I have been looking at these pictures for a while now. They definitely add to the strangeness of the time frame when the majority of the bizarre events took place.

So what am I talking about? Some call it The Great Seattle Regrade, some call it the Denny Regrade. Here is what Wikipedia has to say on the matter, "When white settlers first came to Seattle in the early 1850s, the tides of Elliott Bay lapped at the base of Beacon Hill. The original location of the settlement that became Seattle—today's Pioneer Square—was a low-lying island. A series of regrades leveled paths for roads, demolished Denny Hill, and turned much of Jackson Hill (a remnant of which remains along Main Street in the International District) into a near-canyon between First and Beacon Hills. The roughly 50,000,000 short tons (45,400,000 t) of earth from these 60 regrades provided landfill for the city's waterfront and the industrial/commercial neighborhood now known as SoDo, and built Harbor Island, at the time the largest man-made island in the world.

The Denny Regrade project was the removal of Denny Hill, one of the proverbial seven hills of Seattle. It ran east from First Avenue between Pike Street and Denny Way. Hill and street were named after the Denny family, who were among the city's earliest white inhabitants. The First Avenue regrade was started in 1897 and completed on January 6, 1899. From 1902 to 1911, the hill was sluiced into Elliott Bay by pumping water from Lake Union using hydraulic mining techniques, in a series of regrades along Pike and Pine Streets, Second Avenue, and the massive Denny Regrade No. 1 which regraded everything remaining between Fifth Avenue and the waterfront. In 1929–30, Denny Regrade No. 2 removed the final pieces of the hill east of Fifth Avenue using steam shovels."

In a nutshell: several huge hills were removed to make life easier for the citizens of Seattle.

Funny thing, but on the 1891 Bird's Eye View of Seattle, the artist forgot to show the hills to be regraded later. You can use the link for a better quality image. 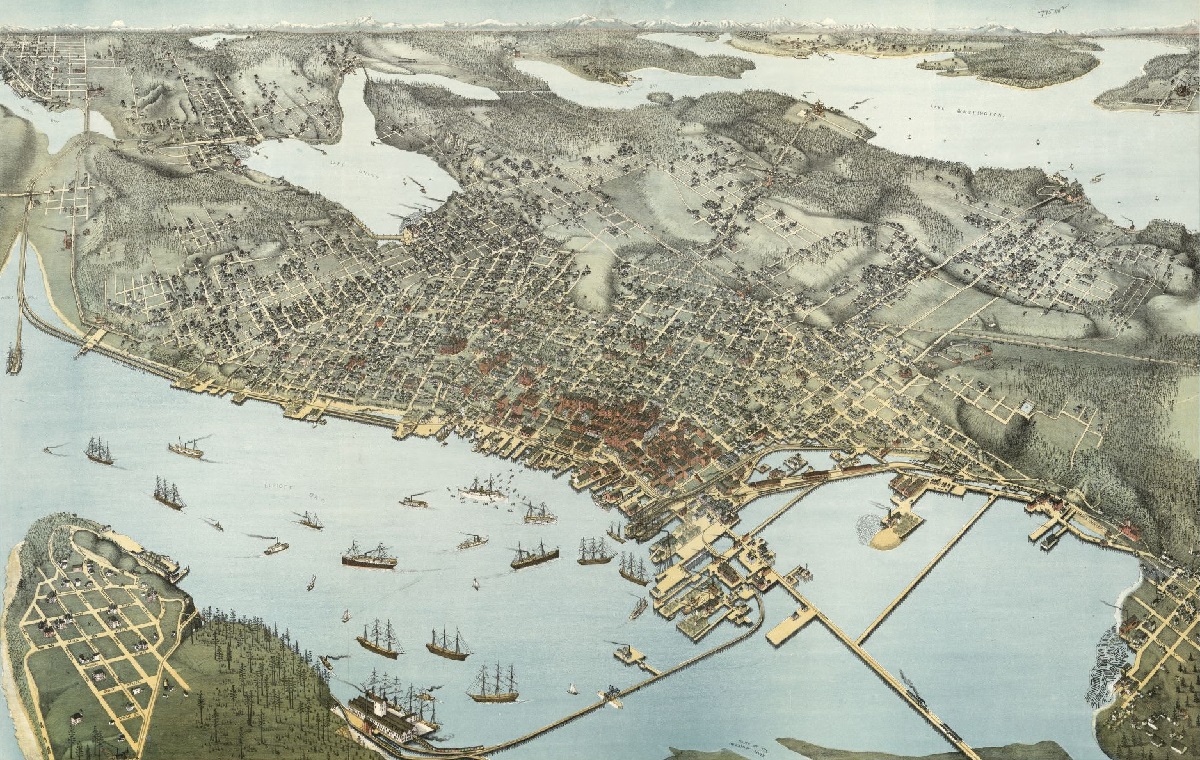 ​
Basically, not to make this topic longer then it has to be, I will just present a few regrading photographs. What I see in those pictures are buildings being dug out. For some of those not as much as being dug out but rather the unnecessary dirt being removed. Look closer to where dirt meets the buildings. 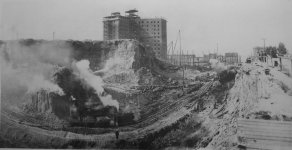 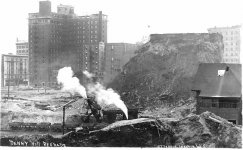 ​
For the above six images I could say, that the observed "regrading" appears to be questionable at the very least. Huge multistory buildings are siting within the natural pass of a normal hill, thus making those buildings suspects to being partially buried under the dirt. I do not believe for a second that the technology of the late 19th, and early 20th century would allow to lower down a 15 story building by as much as 100 feet.
The below image prompts me to ask a simple question of what is this building doing there? It is not some sort of a wooden hut, or a tent. The right side of the building looks partially destroyed. The roof appears to have fallen in. The entire building looks either destroyed, or unfinished (this one I highly question), yet there is no sign of construction. Right next to it thousands of tons of dirt have been removed. This building appears to be old. Are they going to lower it down? What's going on? 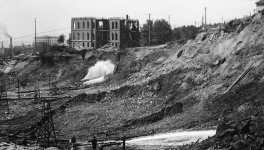 ​
Then we have the scale of the tragedy, so to speak. The mountains of dirt had to be moved to accommodate for the lack of planning I guess, that is if you think conventionally. This is the end of the 19th century, and Seattle did not even get established till like 1851. If you know your traditional history, the area around Seattle was still widely available for settling. Up and down the coast no other cities had to play these "musical chairs" with landscaping. Apparently those early Seattleites did not care about finding easier ways.

One way or the other, we have the bizarre operation resulting in these weirdly looking mounds of clay or whatever. Was there anything inside? (buildings?) 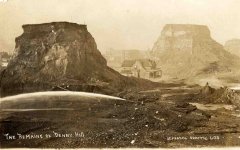 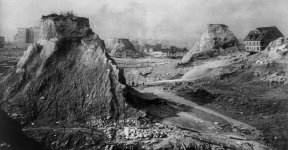 ​
With all that we can clearly see that some of the smaller buildings were indeed lowered down. But the key word is small, and I have little doubt that it was doable at the end of the 19th century, and definitely was later on in the 1920s. 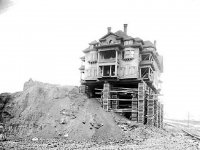 ​
Now let us look at this water technique used (there were more conventional ones as well). If you ever tried to pull this off in your own backyard using a simple hose, you would notice that huge amounts of water quickly accumulate in the area. You water stream punches a hole in the dirt, and then you have to wait for the water to clear the way. Wouldn't there have to be an ocean of water when you use this technique trying to remove the dirt?

The more dramatic Denny Regrade No. 1 (1908–1911) sluiced away the entire half of the hill closest to the waterfront, about 27 city blocks extending from Pine Street to Cedar Street and from Second to Fifth Avenues. 20,000,000 US gallons (75,708 kl) of water a day were pumped from Lake Union, to be aimed at the hill as jets of water, then run through tunnels to Elliott Bay.
Click to expand... 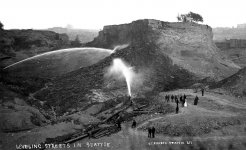 ​
I keep on having this feeling that pictures do not match the explanation once again. At first Seattle manages to erect 5.5k of buildings within 18 months. Then we have this magical dirt removal, which only makes sense when looked at from the historical perspective.

My opinion, that there were multiple buildings produced by the previous spin of our civilization. Some of those building were either entirely, or partially buried under the dirt from an unknown event of Biblical proportions. These buried buildings put Seattle in line with the rest of the world: Mud flood, dirt rain, and the story of the buried buildings. For whatever reason we are not privy to the knowledge of what happened in the 19th century. As a result we are being fed bogus stories, like this one, or the one where the entire City of Chicago was raised by at least six feet.

Found the alleged photos of the Occidental Building on this site and it looks like a great resource. Regrading photos, Alaska Yukon Pacific Exposition*, and more:

This Web site is dedicated to the history and photos of Otto Theodore Frasch, better known as "O.T. Frasch" for the way he signed his real photo postcards of Seattle and surrounding areas of the state of Washington from about 1907 to 1915. It is maintained by the children and grandchildren of his first daughter, Elsie Frasch.
Click to expand... 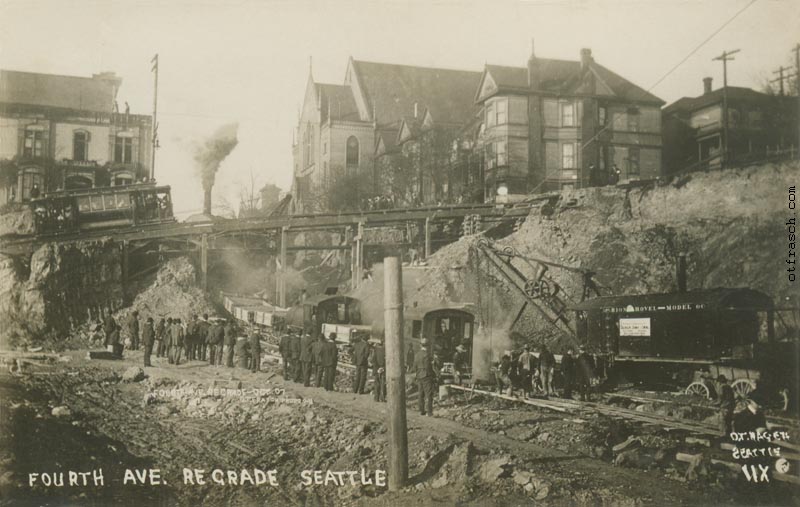 This is a photo of the Fourth Avenue street regrade, taken in October 1907. Many of Seattle's hills were dug out or washed away to flatten the streets and raise property values. Houses and businesses on the hills were forced to move, not always agreeably.
Click to expand...

*Something weird going on there too, most of the pictures are supposed to be credited to Frank Nowell, who was supposedly able to take pictures before the expo opened, but half of the photos that ended up in Frasch's collection are missing Nowell's printed watermark. Here's an example:
I'd have put this in a thread about the Alaska Yukon Pacific Exposition, but there isn't one, I don't believe.
Last edited: Mar 7, 2021

Excellent post. I take your point re the first jpeg you offer up and to check where the spoil meets the buildings. On the extreme right is a lone man walking away from the camera. At 1 o’clock to his right shoulder you can clearly see the damp marks on the wall caused by earth sitting up close against it. I could understand that happening if large earthmovers had been used to simply push the spoil from left to right up against the walls of the buildings, but they were yet to be invented...and with all that massive earth movement/regrade I count only 9 actual ‘workers.’
The point made re the lack of water ponds from constant hose use is also really valid. Love this site, so much good stuff.
J

In this photo: Link

There is what looks to be a temple on the horizon.
I cropped, sharpened and inverted to try to get some clarity but the base image is poor. Do you have a link to a better version?

jd755 said:
Do you have a link to a better version?
Click to expand...

Your eyes are much better than mine, I have no idea what you are looking at. Below links have tons of Seattle regrading photographs, see if a better quality image is in there.
Could not help myself. Looks like we can see a clear difference between newer and older structures here. Why would they use bricks as their foundation material? 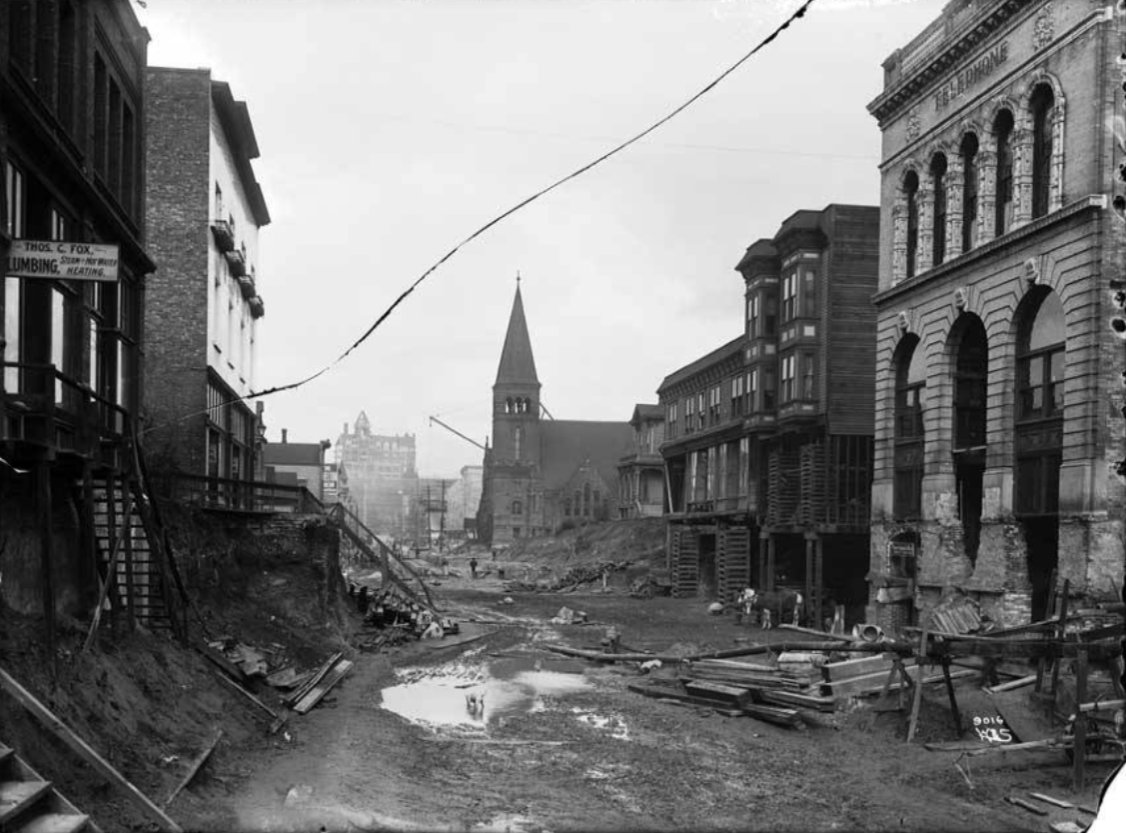 Source
​
I've seen many photographs of older Seattle buildings. I have no idea what this one on the right is. 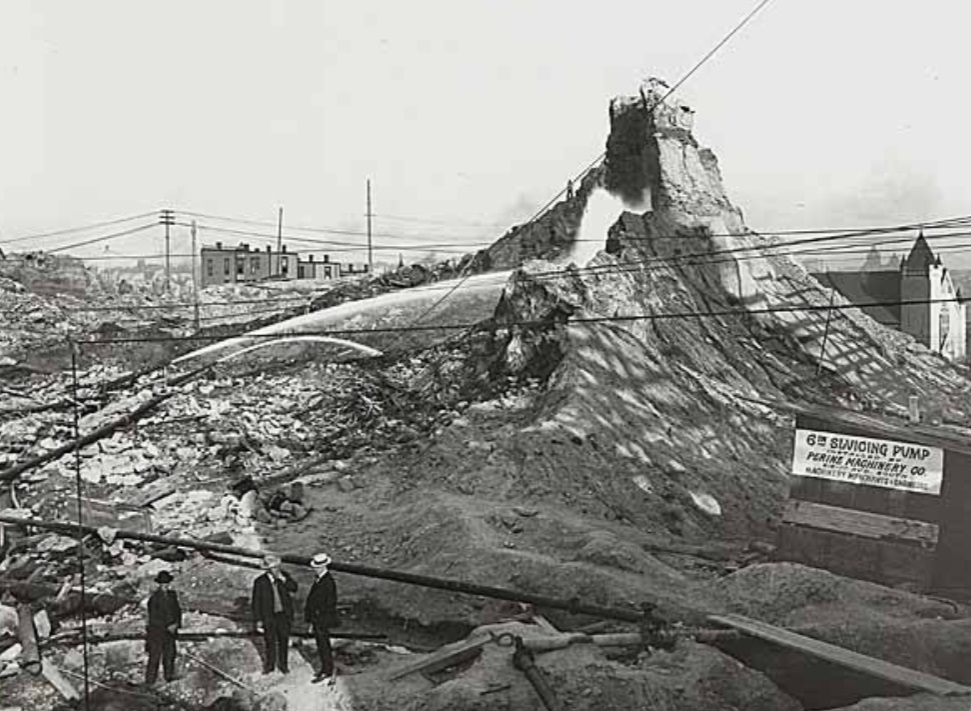 Source
​
Did they lower this building in the middle, or it was always there? 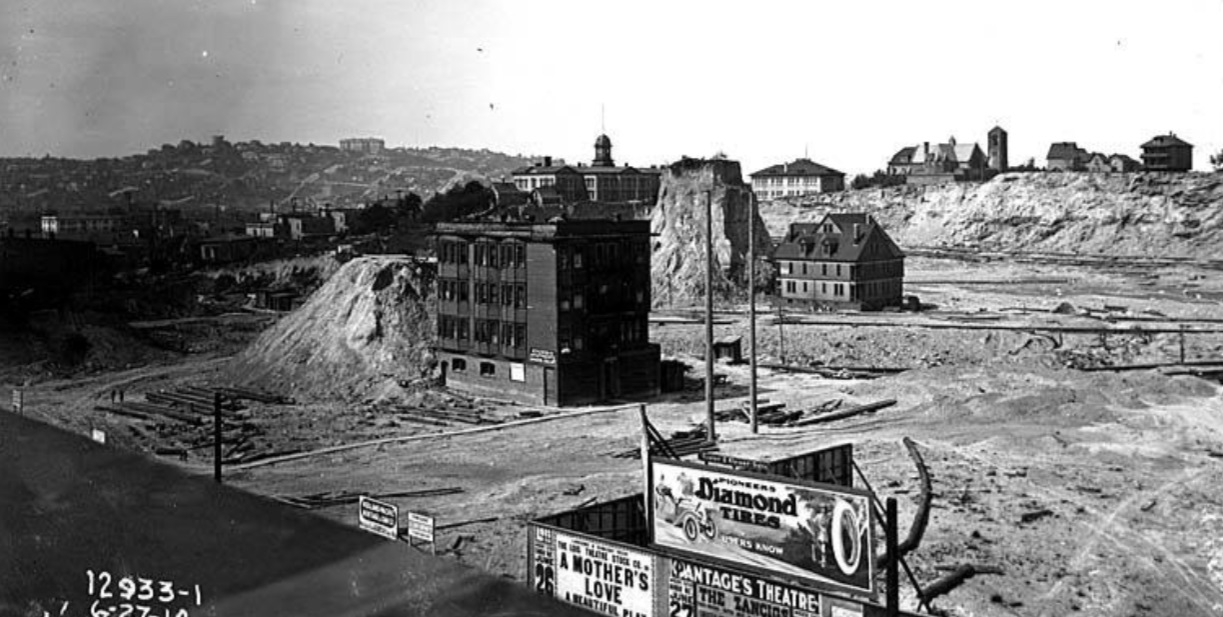 Source
​
You are welcome to suggest your own version of what we had going on here. 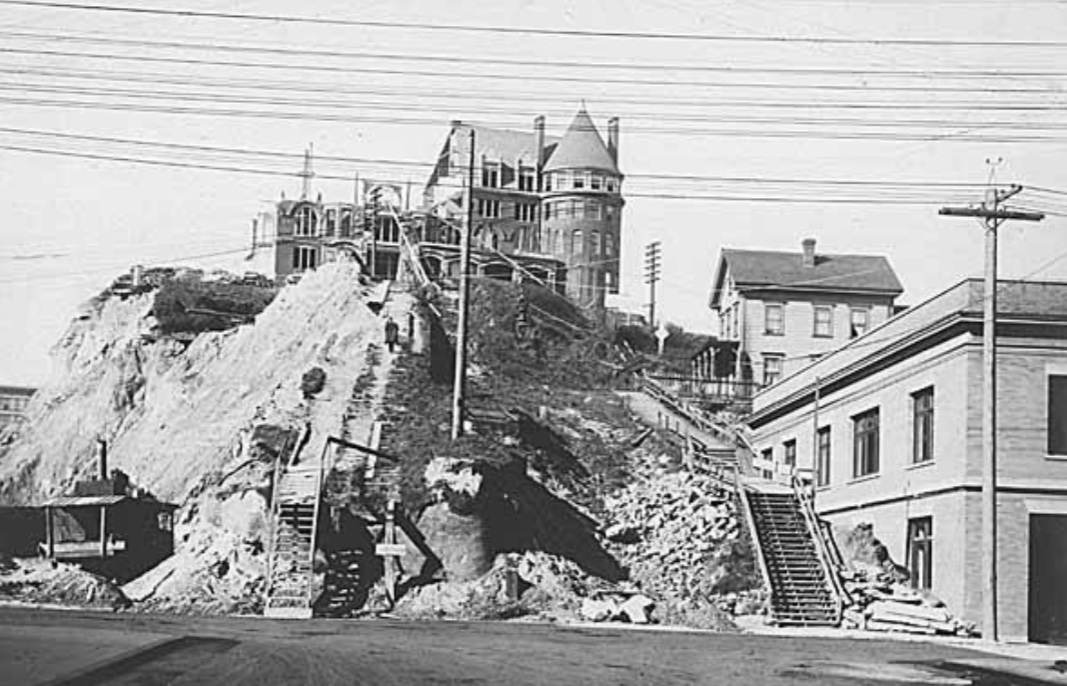 Sorry it was late last night when posting. This is the image: Link

and here is a screen grab of the image showing a temple? in the oval selection which was inverted and sharpened.