What lies beneath Panarea Island? Could it be a pyramid?

@Recognition shared his findings with me, and I think we could do some related research. I am not sure how credible Google underwater imaging is, at the same time right angles in nature are very rare. 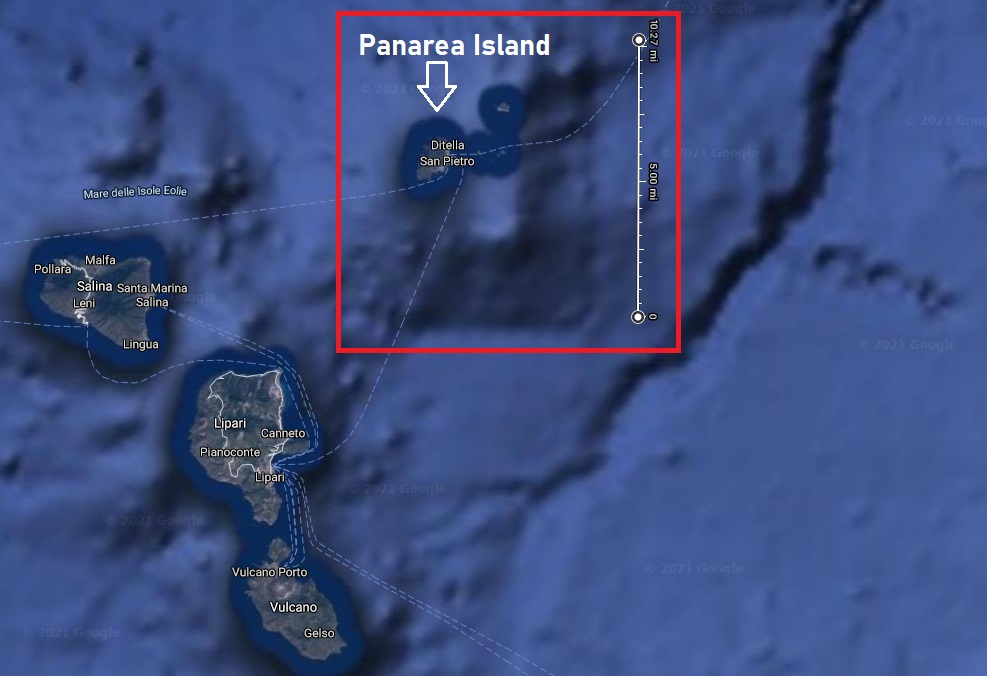 Panarea Island​
Panarea is the smallest of the seven inhabited Aeolian Islands, a volcanic island chain in north of Sicily, southern Italy. There are currently about 280 residents living on the island year-round. 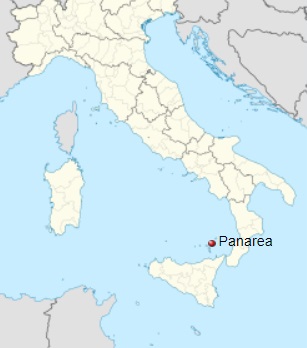 Coordinates: 38°38′15″N 15°04′00″E
​
In antiquity, the island was named "Euonymos"; the nearby islet of Basiluzzo, administered from Panarea, was named "Hycesia". There is archaeological evidence on the island dating back to Mycenaean inhabitants (~ 1200 BCE); later the island was settled by Romans. There were people still living on the island until pirates and other Mediterranean raiders made life unbearable after the fall of the Western Roman Empire.

KD: Well, I don't know whether what we have was indeed a pyramid, but it could be a structure of sorts. Let's see what we can find out.
Click to expand...

Well it certainly is a big one and it is almost perfectly aligned, defiantly worthy of a closer look at the region.

I had a look through the historical images on GE, whilst there are plenty of them going back to 1984(Alarm bells)(euṓnumos, “lucky”) I guess, none show anything. 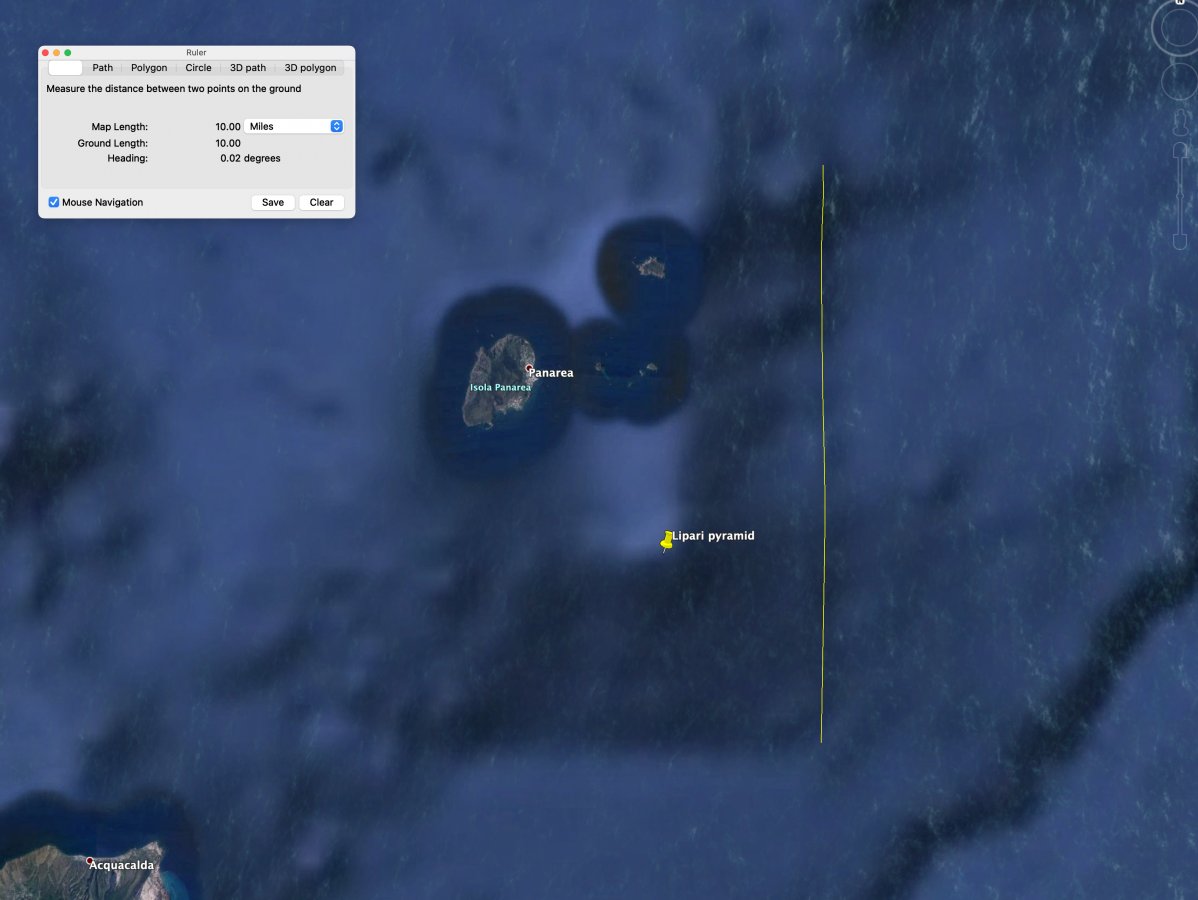 From the geological point of view, Panarea is the oldest island of the Aeolian Islands and the surrounding islands is all that remains of eruptions of a single volcanic basin, now almost completely submerged and eroded by the sea and wind.

On the north-east of the island, in Calcara Beach is still possible to see geysers that rise from the cracks between the rocks (the typical colors sulfur), the last traces of volcanic activity at temperatures up to 100° C.

As told by an old legend, Panarea originally measured about forty square kilometers but in a terrible cataclysm ended up largely under water by the will of the gods that wanted to punish. Of the island of the past emerges now just a few spikes that make up the small archipelago of Panarea, a sea beach ideal for almost exotic, accessible with small boats for rent or by participating organized tours.
Lipari: Legends, labor and love amid the azure waters

The Aeolian archipelago – a group of seven islands and five islets afloat in the Tyrrhenian Sea off the coast of northern Sicily – was named after the Greek god Aeolus, “the keeper of the winds”,

Right Arm said:
Well it certainly is a big one and it is almost perfectly aligned, defiantly worthy of a closer look at the region.

I had a look through the historical images on GE, whilst there are plenty of them going back to 1984(Alarm bells)(euṓnumos, “lucky”) I guess, none show anything.

A wider view of the area suggests there is a group of similar structures/features. 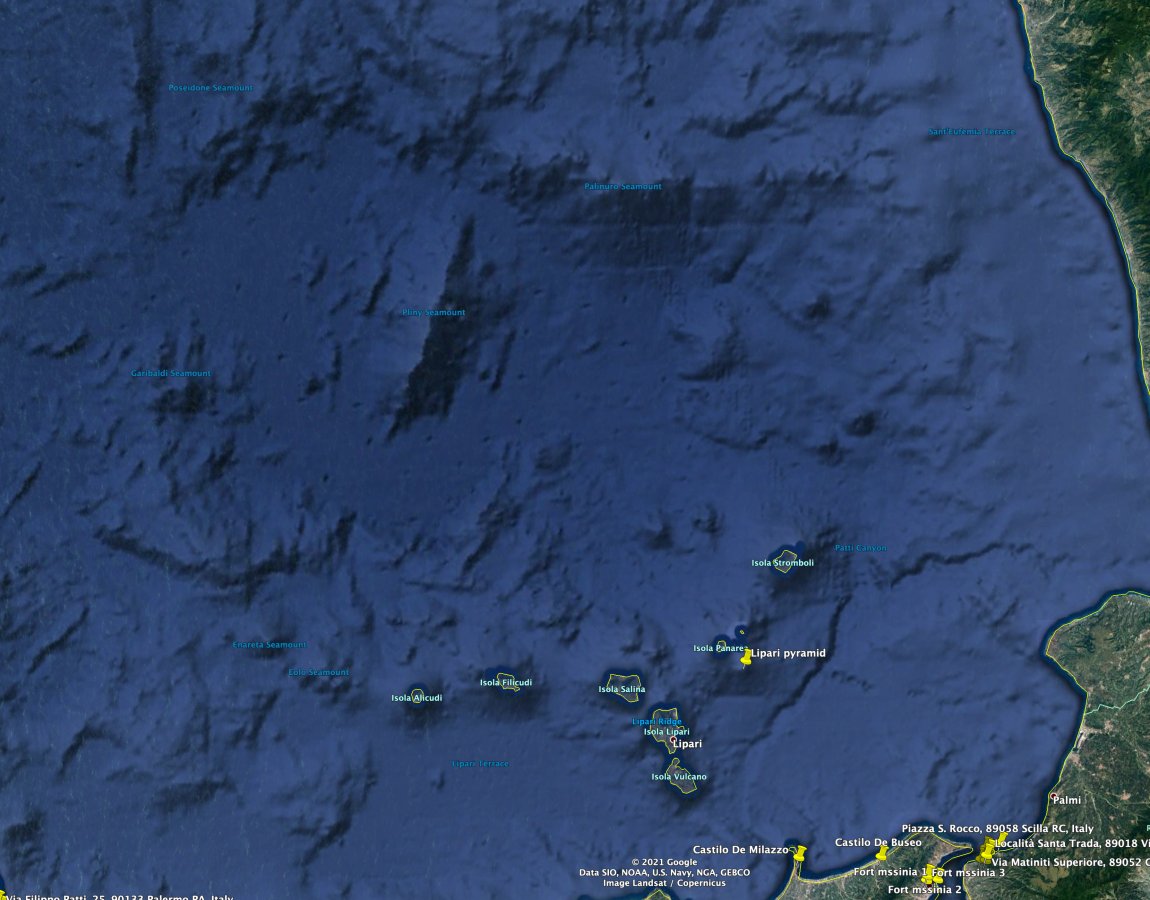 From what I understand, we need to look for a better description of this Euonymous Island, for it sounds like Panarea could be one of its remains. 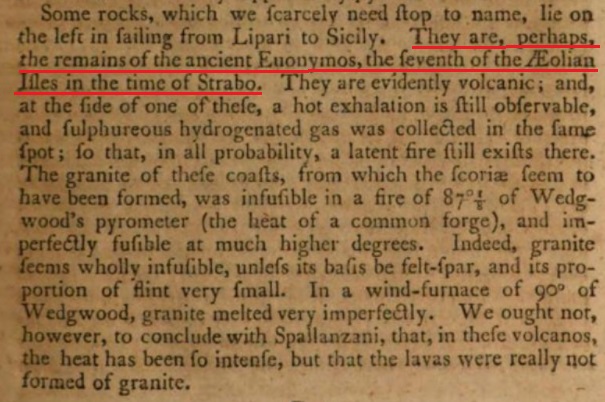 The same type of outline and size on the Garibaldi seamount, just need a third and we will have a "little Giza". 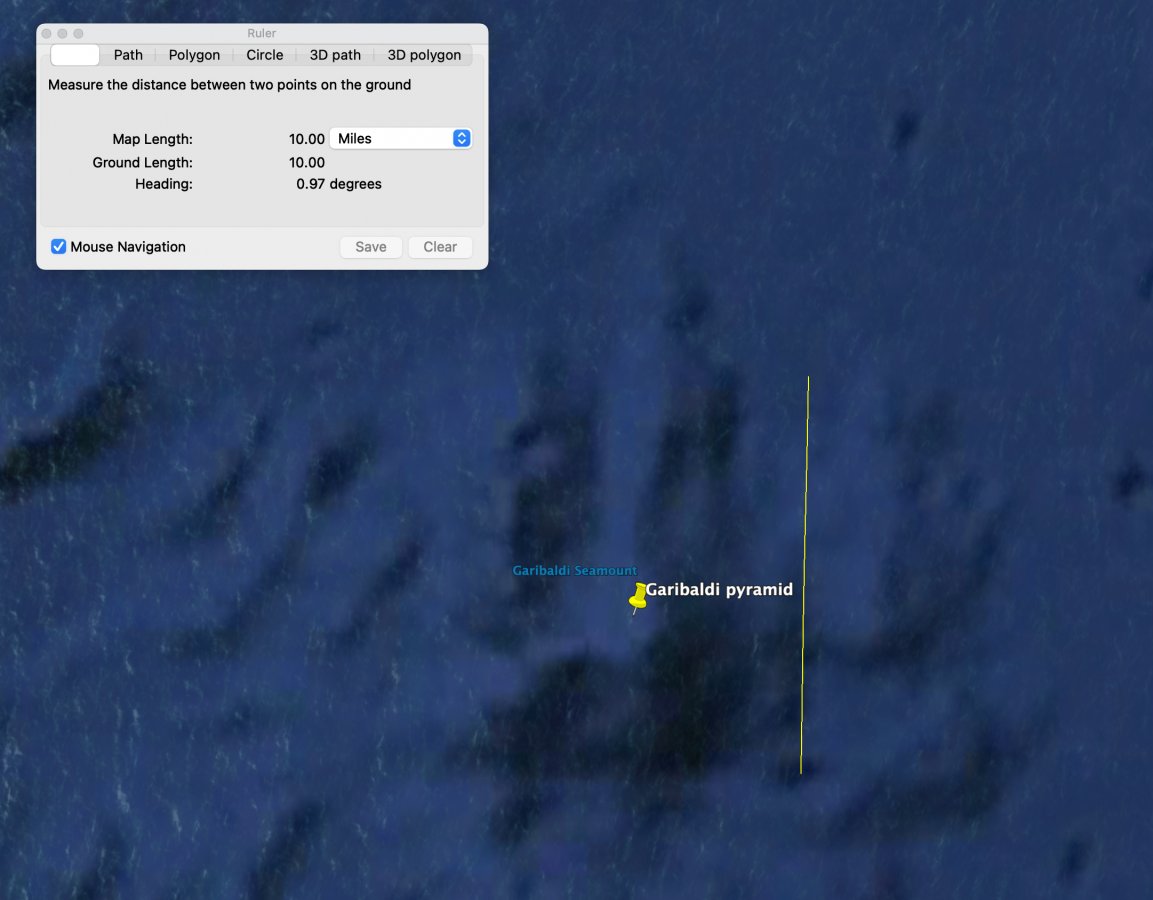 I don't know if this is important, but here is a bit of info on Euonymus. Wondering what spindle trees could have to do with the older name of the Panarea island.

Reminds me of Pyramid Of The Sun, at Teotihuacan, whereas Teotihuacan is 220 meters square, we’re looking at something 10 miles square! 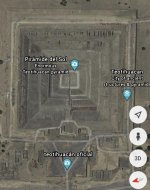 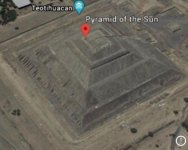 KorbenDallas said:
I don't know if this is important, but here is a bit of info on Euonymus. Wondering what spindle trees could have to do with the older name of the Panarea island.

It’s a curious combined meaning of pointed and fortune. Pyramid with the fortune of being destroyed by gods? This is what comes up when I looked up euōnymos: 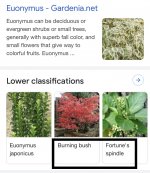 It could be beneficial to consider researching this entire group of the Aeolian Islands.

Euōnymos may be identified with Uranus, titans (giants) and tartaria!
Homer's wind-god Aiolos bears many similarities to Hesiod's Ouranos (Uranus)--both are described as having six sons and daughers joined in wedlock, and both kept a group of storm-spirits locked behind a threshold of bronze. In the case of Ouranos, the twelve children were the Titan-gods, and the storm-gods were the Hekatonkheires (Hecatoncheires) and Kyklopes (Cyclopes) in Tartaros

OURANOS (Uranus) was the primordial god (protogenos) of the sky. The Greeks imagined the sky as a solid dome of brass, decorated with stars, whose edges descended to rest upon the outermost limits of the flat earth. Ouranos was the literal sky, just as his consort Gaia (Gaea) was the earth.

Ouranos and Gaia had twelve sons and six daughters. He locked the eldest of these--the giant Kyklopes (Cyclopes) and Hekatonkheires (Hecatoncheires)--away inside the belly of Earth. Gaia suffered immense pain and persuaded her Titan sons to rebel. Four of these positioned themselves at the corners of the world, ready to grasp their father as he descended to lie with Earth, while the fifth, Kronos (Cronus), took his place in the centre and there castrated Ouranos with an adamantine sickle. The sky-god's blood fell upon the earth, producing the avenging Erinyes and the Gigantes (Giants).

Ouranos prophesied the fall of the Titanes and the punishments they would suffer for their crimes--a prophecy brought to fruition by Zeus who deposed the five brothers and cast them into the pit of Tartaros.

Wondering what the area would look like if we dropped 100-150 feet of water. Need to look for maps frivolously dated with 1300s.

Tried to find some underwater pictures, but did not see anything meaningful so far.

Lipari and Garibaldi are 80 miles apart. 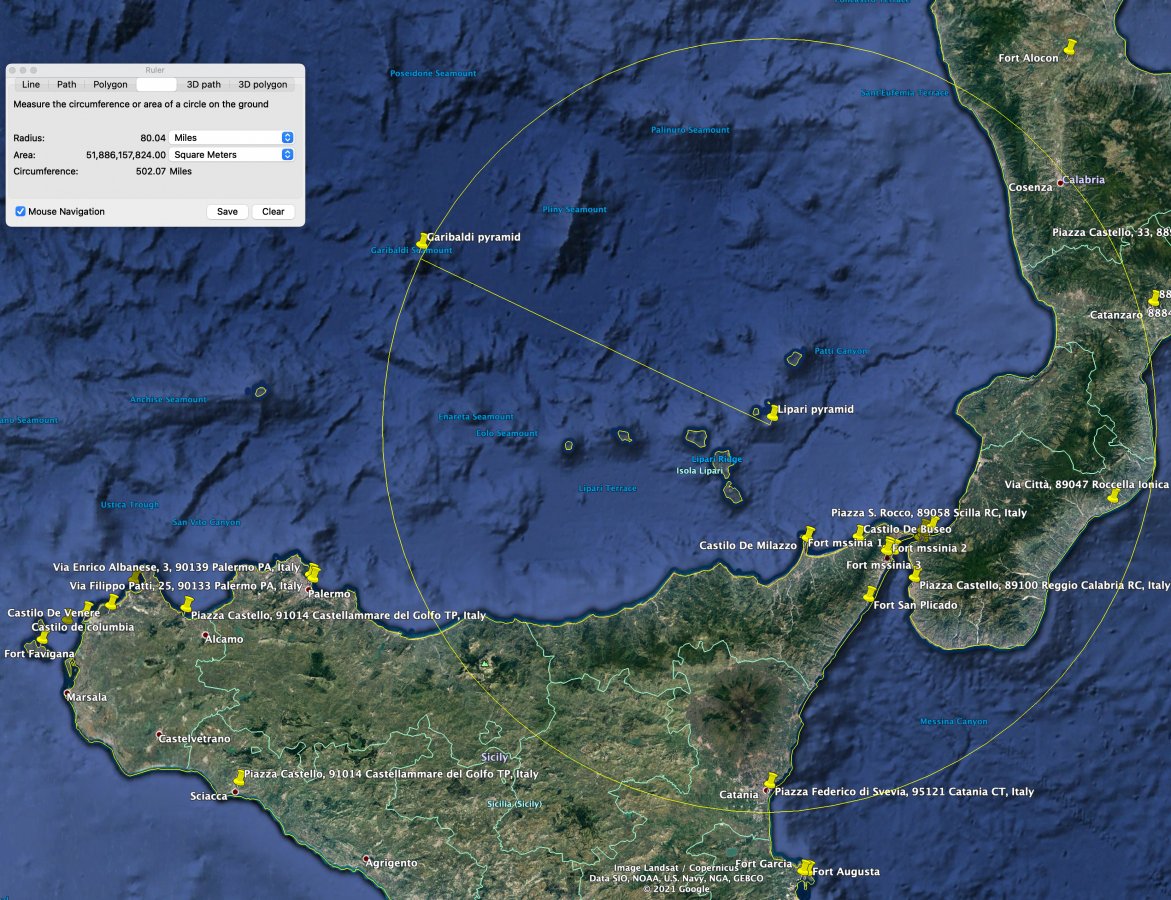 Just to the east we have another similar mound with strait edges and a point and it 66.6 mile from the garibaldi and 40 mile from the lipari, this maybe my imagination stretching it a bit but why not. 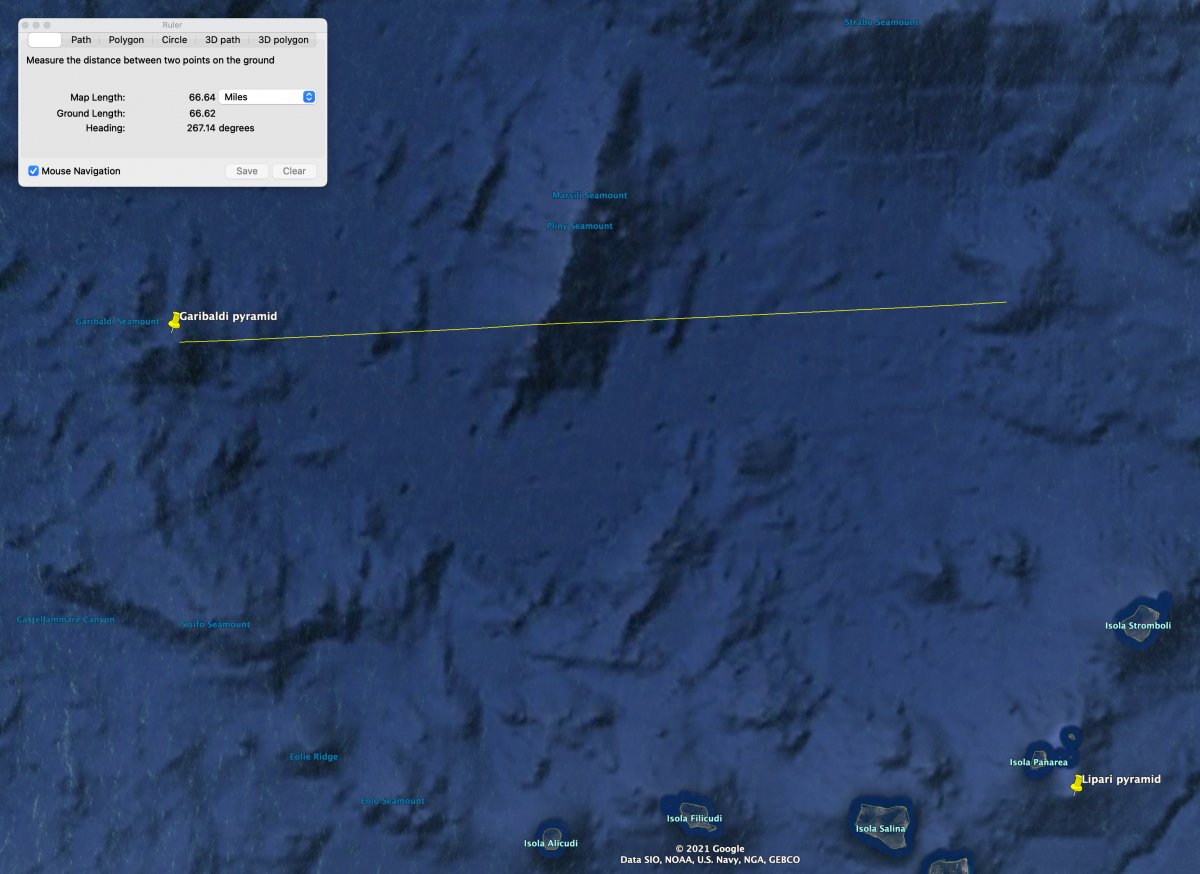 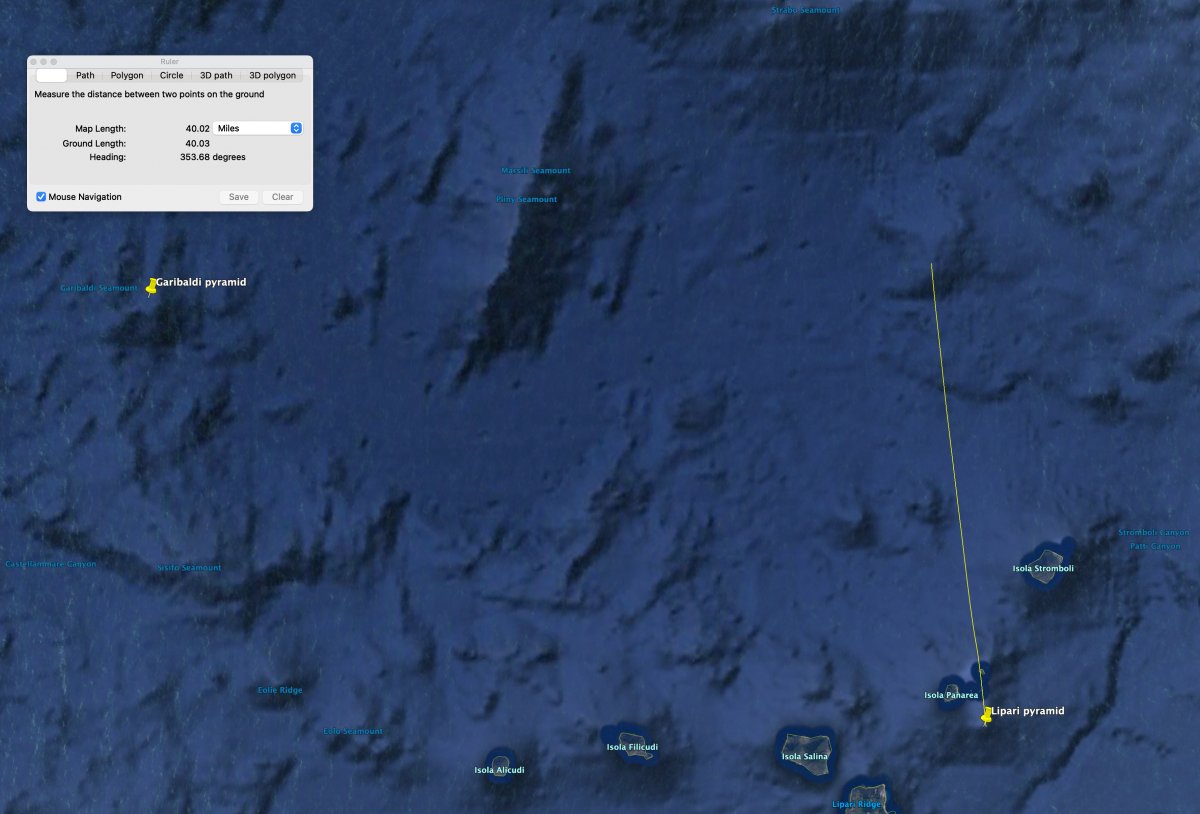 A couple of image overlays gets us this, again a bit of a stretch but it is a suggestion of something larger at play. 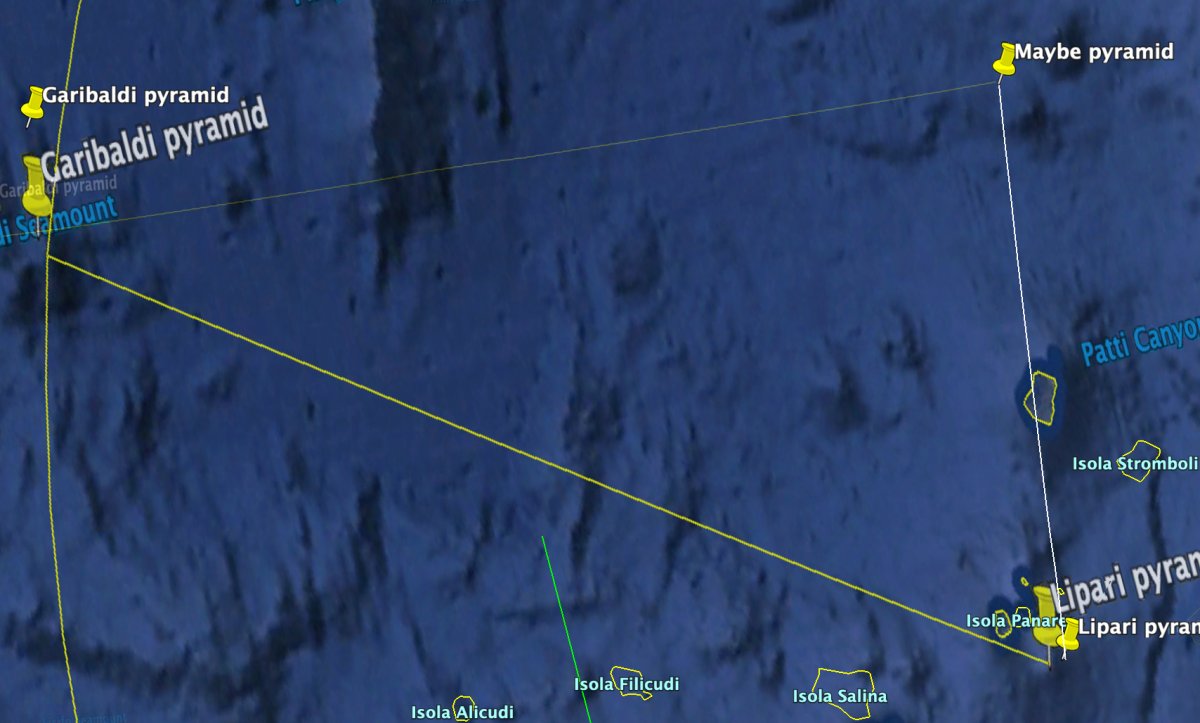 KorbenDallas said:
I am not sure how credible Google underwater imaging is, at the same time right angles in nature are very rare.
Click to expand...

A Google Earth map that raised rumors of the lost city of Atlantis has gotten a much-needed update, ridding the seafloor of a gridlike pattern that some vigilant users suspected were sunken streets from the mythological underwater city....

...Researchers create this data by using sonar, or sound waves, that bounce off the seafloor and return information about its shape, not unlike how a bat uses sonar to "see" bugs. When Google uses lots of these surveys together, they sometimes overlap, creating strange gridlike patterns...

...The updated Google Ocean has been scrubbed of this Atlantis artifact. Google Ocean is also becoming increasingly accurate in other ways. The program now has 15 percent of its seafloor image taken from shipboard soundings at a 0.6-mile (1 km) resolution.
Click to expand...

Bad data or cover-up? Another article has this, uhh, statement:

Most areas of the ocean remain mapped in less detail than the surfaces of the moon and Mars.
Click to expand...

Always love that. In the same vein as "we know more about our solar system than the deep ocean on Earth!" Which reads to me as "we don't know Jack about either".

NOAA is just one of many agencies around the world that uses sonar to 'see' what the seafloor looks like. Some of these surveys of the ocean bottom cover small areas in great detail. Other surveys are broad-brushed, showing vast areas at low resolutions.

Online mapping tools take these many different sonar surveys created by a variety of agencies and organizations, stitch them together, and pile them up on top of each other in layers. Taken together, these sonar maps provide a seamless picture of what the ocean bottom looks like around the globe. However, some areas appear in more detail than others.

When you see strange grid-like formations on the seafloor while using an online mapping tool, what you are really seeing is two (or more) different maps layered on top of each other. One map may show a large, low-resolution picture of the ocean floor. This map will show little detail and will look smooth. The other map, or 'data set,' often looks like a bunch of grid-like lines overlaying the smooth, low-detail map...
Click to expand...

So, comparing to their example, this imagery from Panarea Island doesn't seem to exactly fit the explanation provided... however, it's also very obviously "low resolution."

I personally trust all this Google Earth ocean imagery about as much as any available maps of Mars. It's all got a real "it's Photoshop, because it has to be" vibe.

That said, I think maybe pouring into some of this research could be revealing:
That first link, the PDF, has some imagery in it... kind of hard to match it up to anything that Google is showing though.

Well, I don't know if they get their data from the same source, but ArcGIS shows a similar picture.

I wouldn't be surprised at all if it's from the same source. It's funny, there were a bunch of news articles from 2011ish stating how Google was trying to expand their underwater topological maps going forward... and then pretty much dead silence on the issue since then.

And as I often find, the good stuff (maybe?) is not available for us commoners, unless we make the proper tithing:
Even if you buy it at $42, I'm not sure you could share any of the information from it.

On the map front i can't find that much but did stumble upon this from the piri ries maps.

Source, fol. 220b Northern coastline of Sicily (here called the island of Messina) from Milazzo to Palermo

A big old city/fort in between what i assume to be Stromboli and Lapari volcanoes which is not there any more! 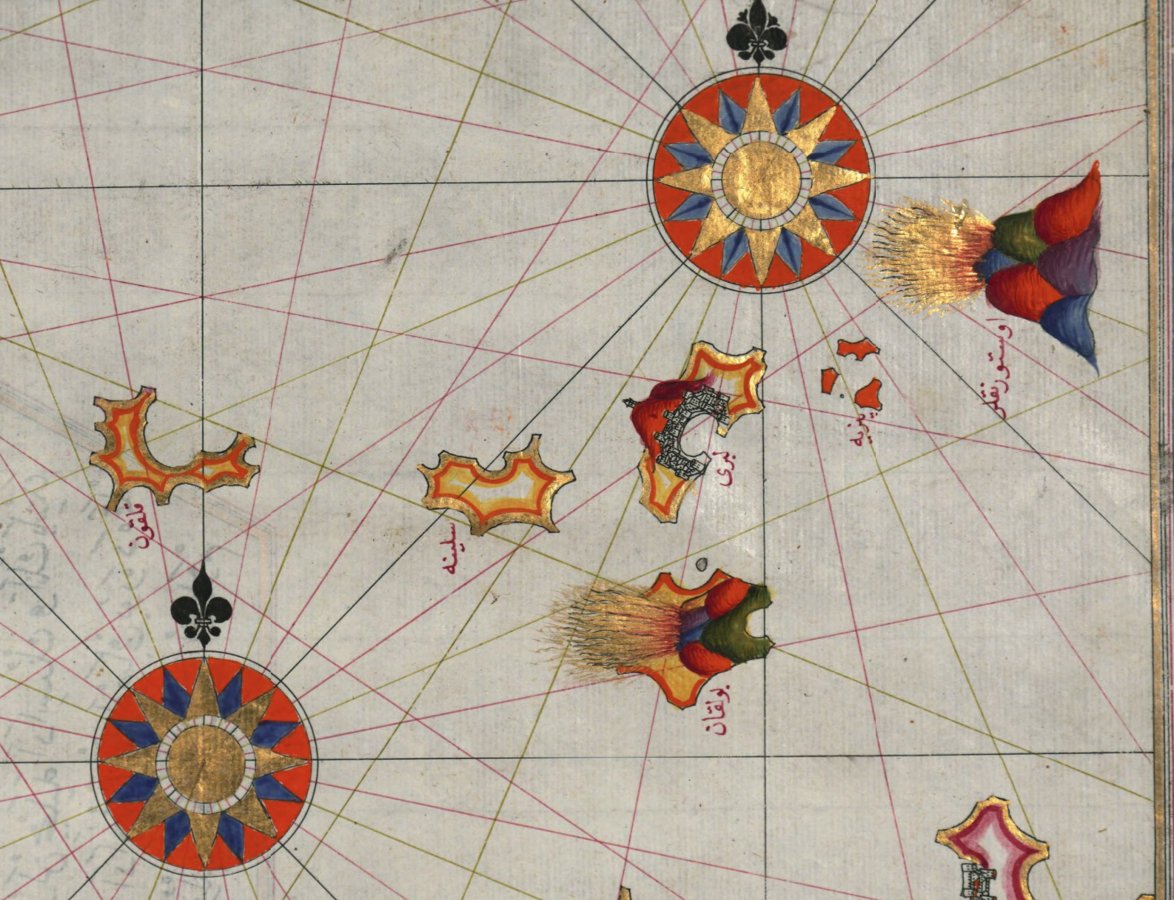 KorbenDallas said:
It could be beneficial to consider researching this entire group of the Aeolian Islands.
Click to expand...

Figured I should probably add that, of course, "the Aeolian Islands are one of 55 UNESCO World Heritage sites in Italy."

Well, if this is indeed a structure, I doubt it was built underwater. If we are to uncover anything, we need to find some info covering the period when this area had less water.

I think we could also do a hunt for the report that panarea used to be “40 kilometers square” in old writings, maybe using it’s ancient names.

I did try tracing a 40 kilometer square lining up to its corner. Here’s what it looks like. 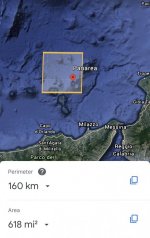 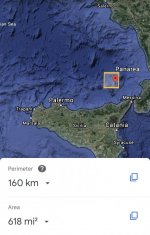 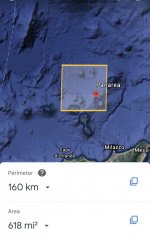 ​
Pictures of smooth slanted wall and vertical walls rising from sea, on GE. 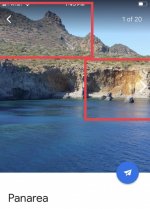 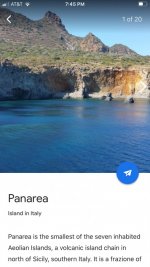 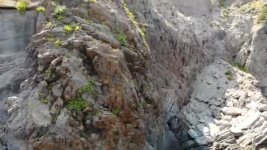 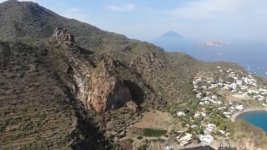 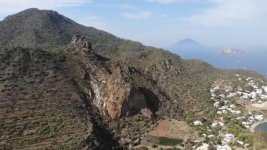 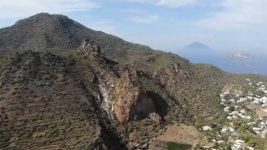 KorbenDallas said:
<...> we need to find some info covering the period when this area had less water.
Click to expand...

I'm afraid we can't find any written sources for that period. For the simple reason that back in mythical times, this group of islands was uninhabited. Before Liparus and his minions fled/arrived there. For anyone interested, here's what Diodorus of Siculus wrote about it.
The region itself is quite dangerous in terms of volcanic activity.