New York Armories: what were they?

Some of the below pictures make me want to visit 1890-1910 New York, for it had to be a sight to behold. A few days ago this article was published. In the process there were so many pictures of other armories, that putting this article together was a no brainer.

NY State Armories​
At this very moment I do not know whether other states had such an abundance of armories similar to the one New York had. It is probably hard to obtain the exact number of these NY structures ever in existence. There are a few lists available for examination, but who can vouch for their completeness?

In this article I wanted to demonstrate what we are dealing with here. This is not even a question of whether New Yorkers could build all those between approximately 1875 and 1925. With New York being the most populous state in the US in 1900, it does appear that they had an adequate work force to get those armories built. Were we to factor in all other buildings erected in New York within the allotted time span... I am not going to, but you are more then welcome to share your opinion on the matter. Essentially, I do not know whether New York workforce and logistics were adequate to the task.
What I do question, is the design and intended purpose of the structures in question. At the same time, things do appear to be on par (qualitiwise) with Prisons, Post-Offices, Asylums and alike.


An Armory​
An armory is a military or civilian location for the storage of arms and ammunition. But our armories are mostly National Guard establishments, and therefore the definition changes quite a bit:
Let us take a look at, let's say five New York Armories.


#1: 9th Regiment Armory​
The cornerstone was laid on December 18, 1894. The massive structure, costing approximately $297,000, rose at 125 West 14th Street--a medieval fortress of rough-cut granite. Crenelated towers, loops (the narrow openings for shooting arrows from inside), and arched entrances gave a solidly monumental quality to the building. With 40-inch thick walls, it was built to withstand attack. The colossal iron entrance doors were iron were ornamented with scrollwork. 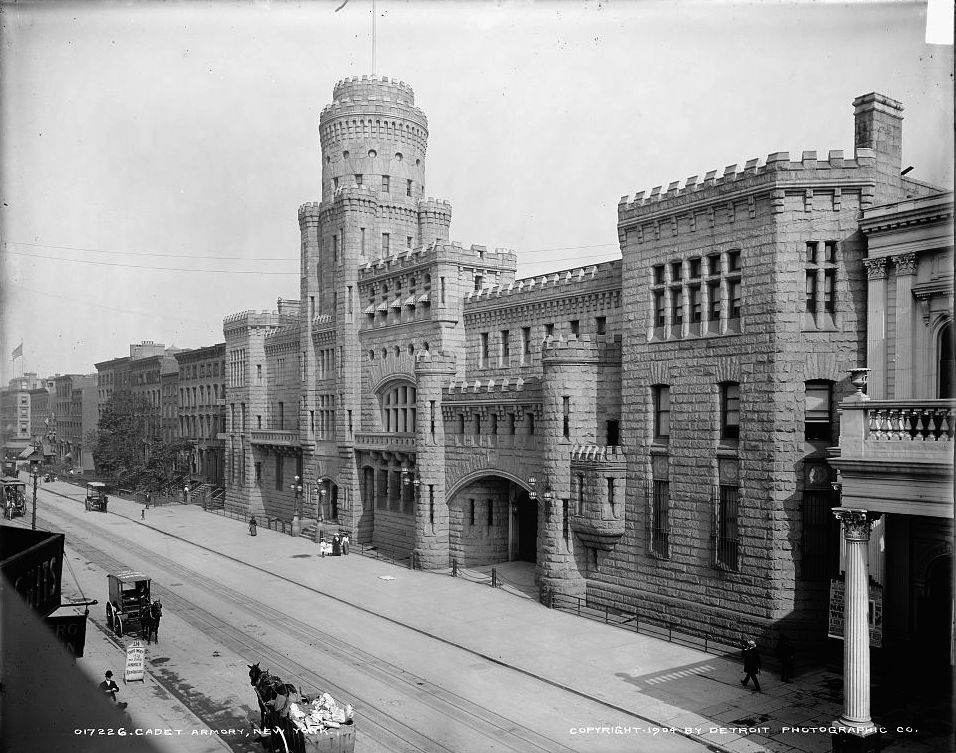 #2: 8th Regiment Armory​
I do not have any valuable information pertaining to this specific building. It's architect was John R. Thomas, and that's about all I could find 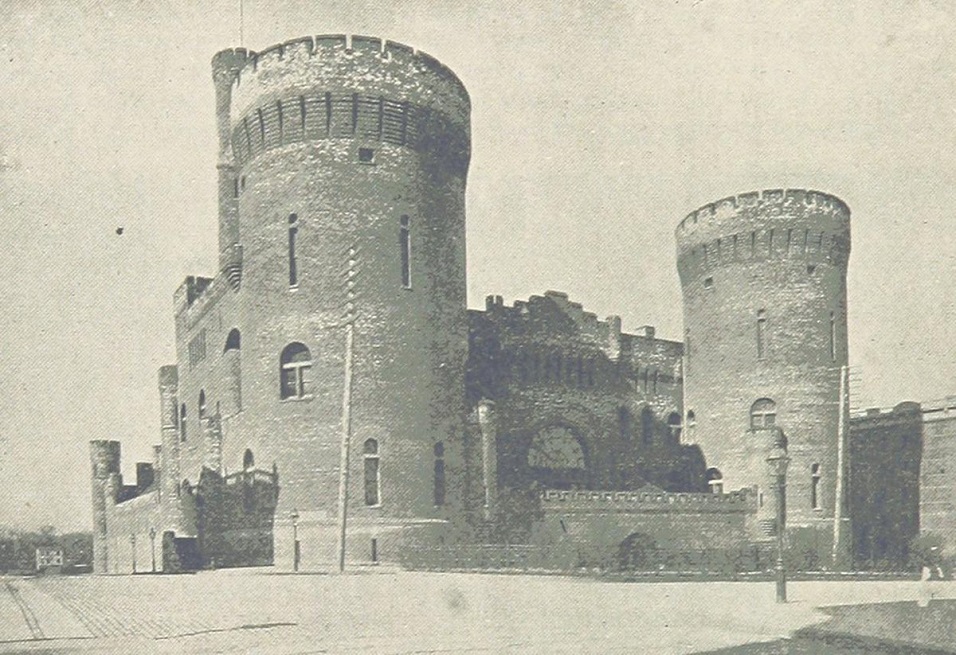 #3: 14th Regiment Armory​
The cornerstone of the building was laid on December 6, 1894, when the building was nearly complete. The building was substantially complete on August 15, 1895. Twelve days later, the Fourteenth Regiment moved into the new armory building. In 1900, Horgan & Slattery added a new floor and added mezzanine pilings at a cost of $30,000. Six years later, further improvements to the interior were performed for $35,600. 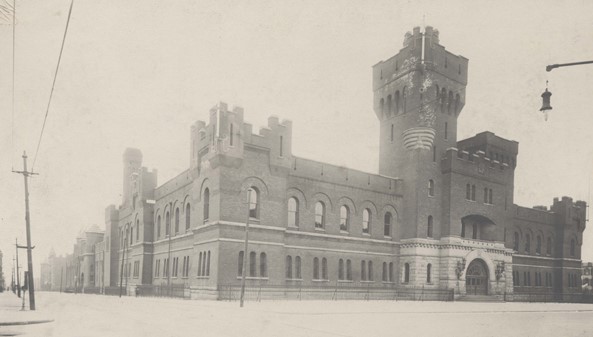 #4: 69th Regiment Armory​
On April 23, 1904 the cornerstone was laid with impressive ceremonies. Irish-Americans were rightfully conspicuous in full force. The two stands erected at the corner of 25th Street and Lexington Avenue were decorated with Irish and American flags. The regiment and its guests were escorted by the Ancient Order of Hibernians and approximately 200 members of the Friendly Sons of St. Patrick were among the first to arrive. Joseph I. C. Clarke composed a poem for the occasion “The Gallant Sixty-ninth,” and the Irish-theme of the event was consummated when Major Gen. McMahon presented the silver trowel to Mayor McClellan with which he laid the cornerstone.

Two and a half years later, on October 6, 1906, the building was completed and dedicated. The Times called it “a handsome and commodious building” and noted that the drill hall was the largest in the city. Impressive military pomp accompanied the ceremonies, including a parade from the old armory at Tompkins’ Market and the presentation of the battle flags. 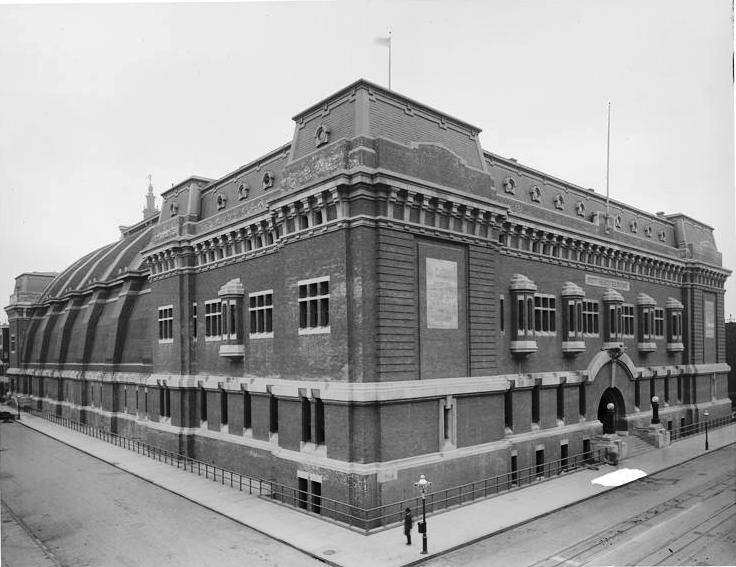 This here is allegedly a drill hall, but... was it designed for a blimp? It sure looks like a hangar for those. 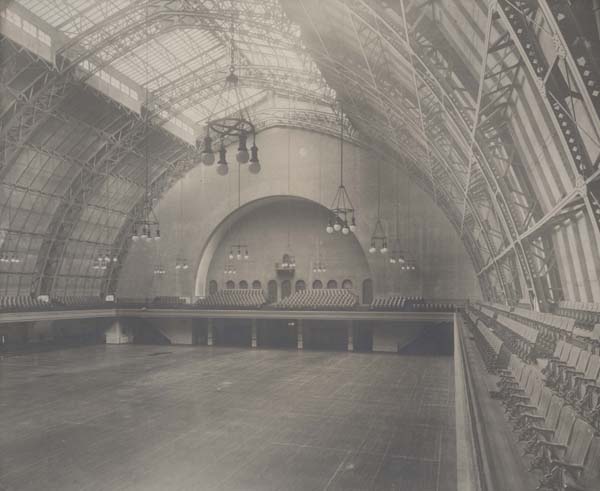 #5: 12th Regiment Armory​
The 12th Regiment armory had been located on Longacre Square (later renamed Times Square), where Manhattan’s carriage-making industry was centered. But by the early 1880s the rapidly-developing Upper West Side required an armory. A plot encompassing 22 city lots on Ninth Avenue (now Columbus Avenue) from 61st to 62nd Streets was purchased and in April 1885 ground was broken.
Invading enemies would be well advised to steer clear of the 12th Regiment Armory. The Times reported “Along the edge of the roof of the drill room will run a parapet walk guarded by a stone wall nine feet high. Seventy portholes are to be built in this wall…This will be the only armory in the United States that will be practicably defensible from the inside. The building will be of granite and brick, the former to be used only on the first floor.” 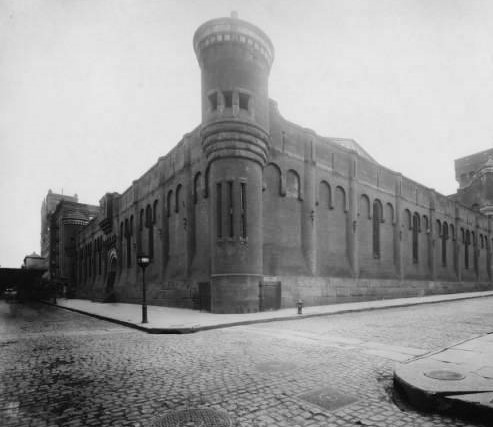 ​
The $750,000 structure was completed in April 1887. Before the 12th Regiment moved in, a glittering reception was held on April 21. Unfortunately, the National Guard was better at fighting battles than at planning social events. Invitations went out to far more people than could be accommodated. 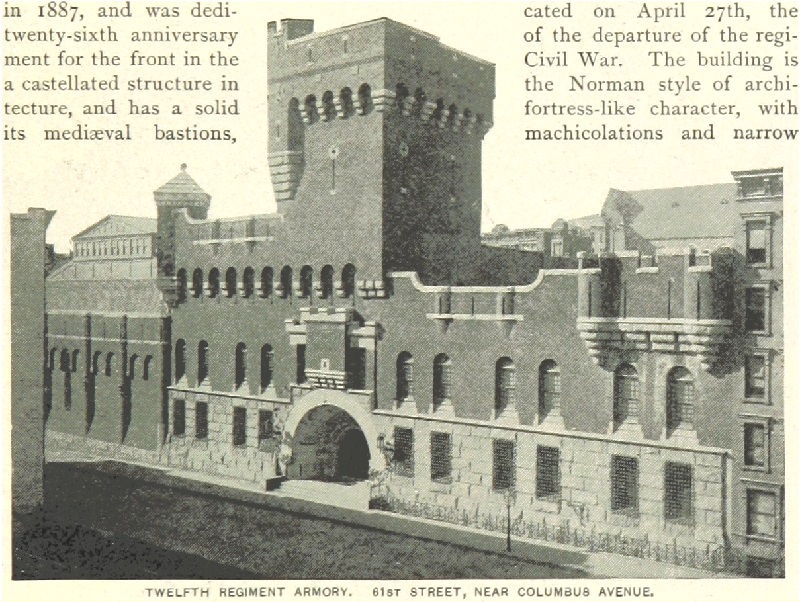 
Survivors​
New York City’s historic armories can be seen all around the city, and are currently used for all kinds of purposes in addition to some that retain their original function. They were built between the 18th and 20th centuries for New York State volunteer militia, serving as storage of arms and housing. These monumental fortresses were meant to remind the public of the military’s might and ability to maintain domestic law. Thankfully for us, the militia took great care in designing their fortresses and we have been left with remarkable armories that remind us of an important time in our city’s history. Some still function as National Guard posts, but many have been repurposed since the mid-20th century.

KD: Isn't it amazing that everything was so beautifully executed. No matter what type of structure we talk about, be it a cathedral, armory, post office, capitol, asylum, you name it... they made it look beautiful.

But... what the heck did they need so many armories looking like that? I tried to count individual armories in the below list, but after losing count a few times I abanoned the idea.
What world did those people live in, that they needed 40-inch thick walls downtown NYC? Half of the surrounding buildings were taller than these armories. What was the purpose of having walls that thick when you are covered from higher ground?

And than we have stuff like this of course - The following day the New-York Tribune was irate at the outrageous turn of events. “The people who were asked to the 12th Regiment’s reception last night came near being invited to a riot. Thousands of invitations were sent out, it is said, but after about 3000 people were admitted to the armory, the rest were kept out at the point of the bayonet.” - are they for real with this event recollection? How exciting was an armory opening?

This is an article dedicated to no specific armory, so if you have one you want to share, please do.

Anywho, please speak up if you have anything to say.
Click to expand...